Language
We've been playing with Bitwig Studio 1.0 for a long time (see AskVideo's 3 Bitwig Studio courses published in sync with release!) and it's a special DAW. Find out why in this review.

We've all been waiting so long for Bitwig that there was a danger it would become the stuff of myth and legend. But after what seemed like an eternity, a final release date was revealed at NAMM '14.

So now that Bitwig Studio 1.0 is here and available to the masses, the key questions are: does it live up to the hype and has it been worth the wait? Let's take a look at the big picture here and find out.

After watching the Bitwig saga unfold over the last year or so, I have to say I was pretty excited to get my hands on the software. I was lucky enough to get it early so have had a decent amount of time to become familiarized with the whole package.

In a few interviews I've heard, the guys from Bitwig say that they are huge fans of a variety of DAWs and that they wanted to take the best part of every app out there and combine into one product. 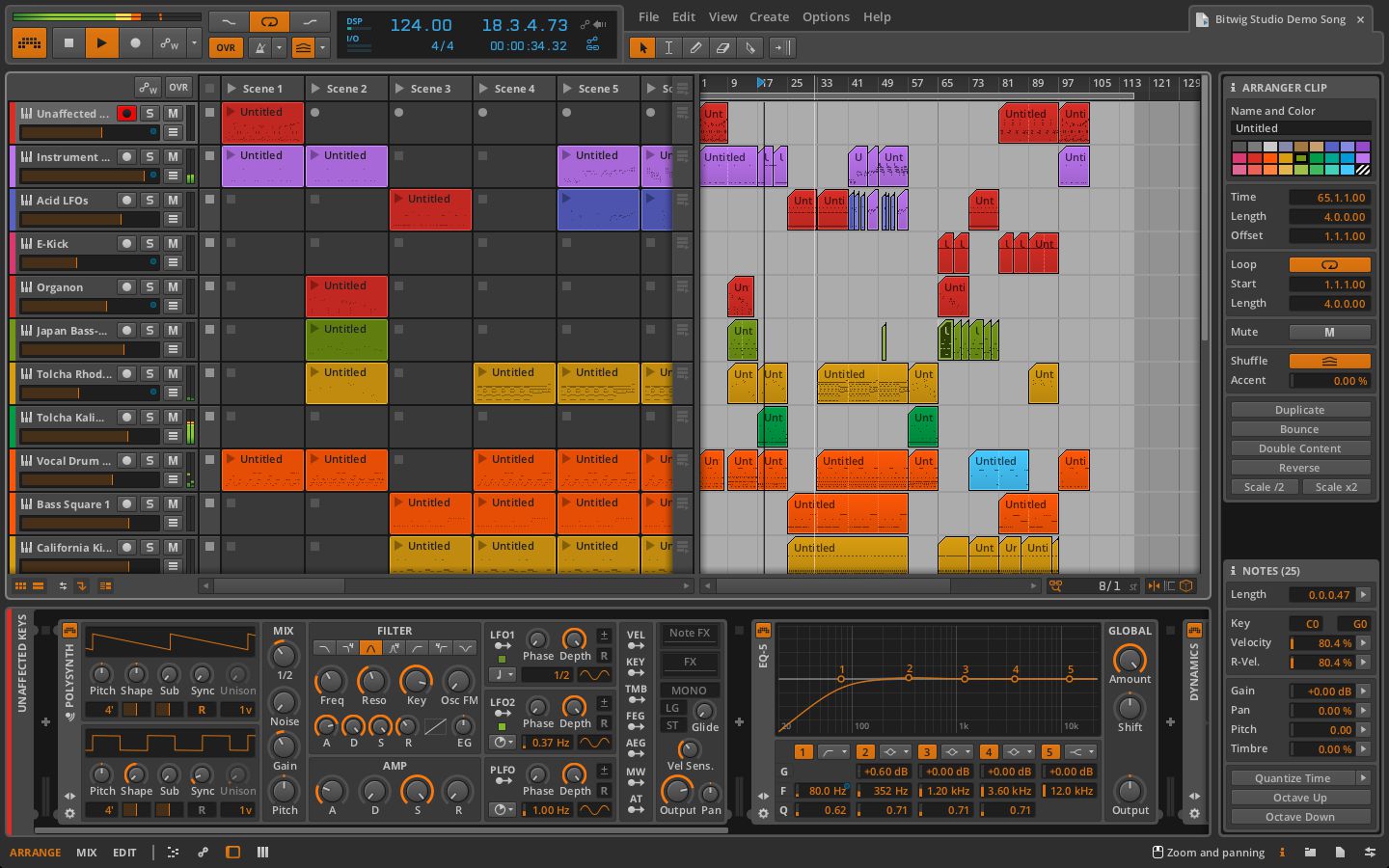 They went on to say that Bitwig not only combines these choice features but offers a true 'music creation system'. The theory behind this is that many of today's DAWs offer top-notch editing and recording tools but often don't focus enough on the creation of music directly within the app.

So all in all, Bitwig promises to deliver a total music creation system that is good for the studio user as well as the live performer. Let's dig into the details and see if they've managed to deliver.

The Interface And Workspace

My first impression of Bitwig's interface was a very positive one to be honest. It somehow looked familiar and fresh at the same time. There has been a lot of comments flying around that it's just an Ableton Live clone, and although the interface layout undoubtedly shares some of Live's DNA, I can tell you this is a very different app.

The first thing that may strike you is the existence of two different sequencers in the same interface. One is a clip launcher (à la Ableton Live) and the other is a more traditional linear style affair. It's awesome to see these two tools living together in this way. Ultimately, it should mean it please more people, more of the time. The Mixer view and detailed metering.

The real beauty of this split sequencer setup is that you don't have to pick one of the other to work in. You can have some tracks that use the clip launcher as their source and some that use the linear sequencer. It's really up to you.

The rest of the interface seems to be equally flexible, with various preset view setups that are configured for small, large and multiple display systems so you should get the most out of Bitwig regardless of the system you are using. 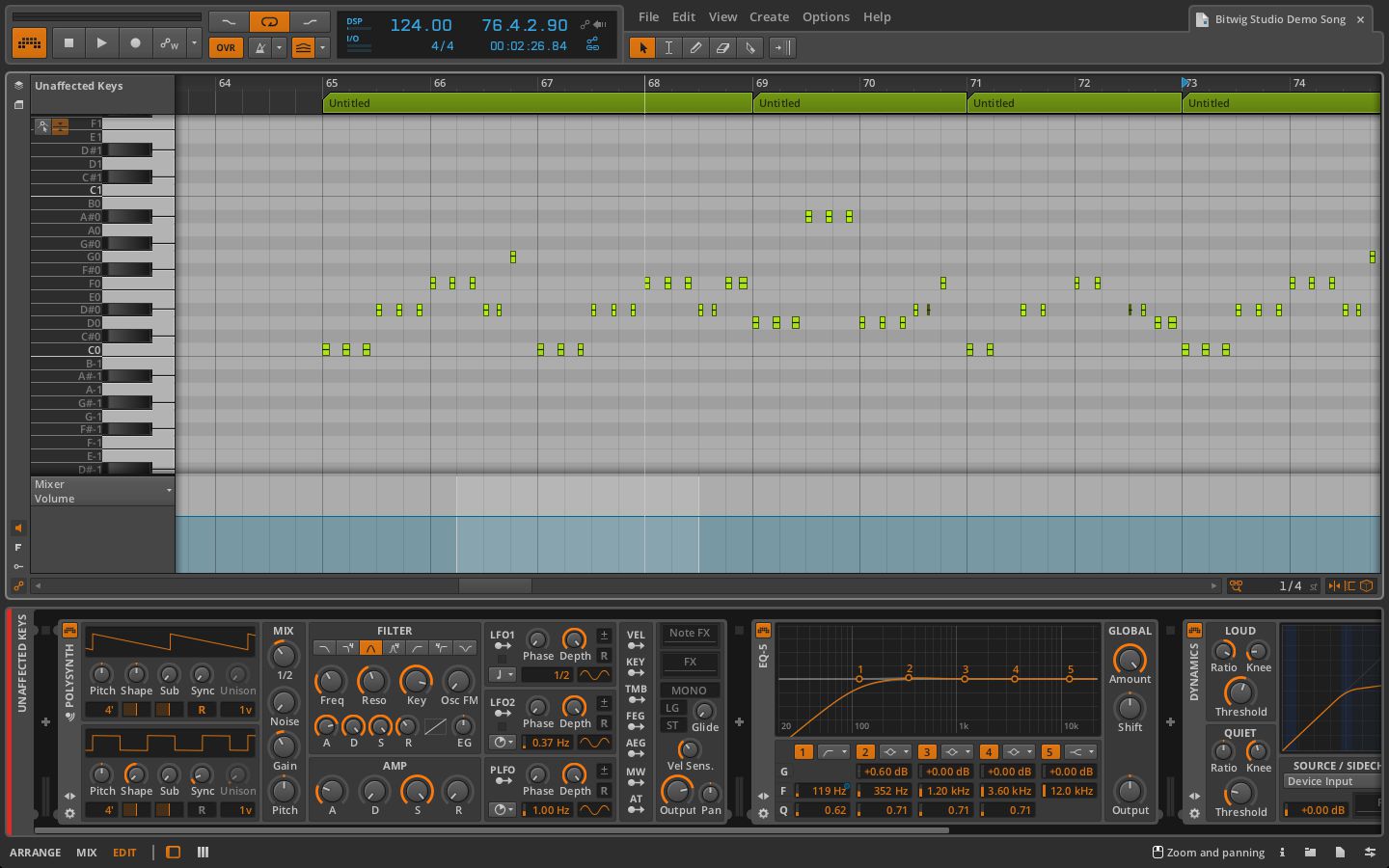 Focused editing with the Edit Panel.

Even once one of these layouts is chosen, you can customize things still further. Just about every area of the interface (Devices, Inspectors, Mixer, Browser) can be resized, moved or hidden. So if you fancy a fully fledged console with full metering or an overview of your entire arrangement, you can get to it with only a few clicks.

So what else do you get with Bitwig? Well, in a nutshell: a full suite of effects and instruments, a ton of presets and even a good collection of raw sounds to get you going.

The instruments and effects included with Bitwig.

At first, I was slightly concerned that the instrument list was not as extensive as other DAWs. After delving into the four synths and various drum generators, I came to the conclusion that there was more than enough to be getting on with here. I guess we have to remember that this is V1.0 and there will undoubtedly be more on the way. 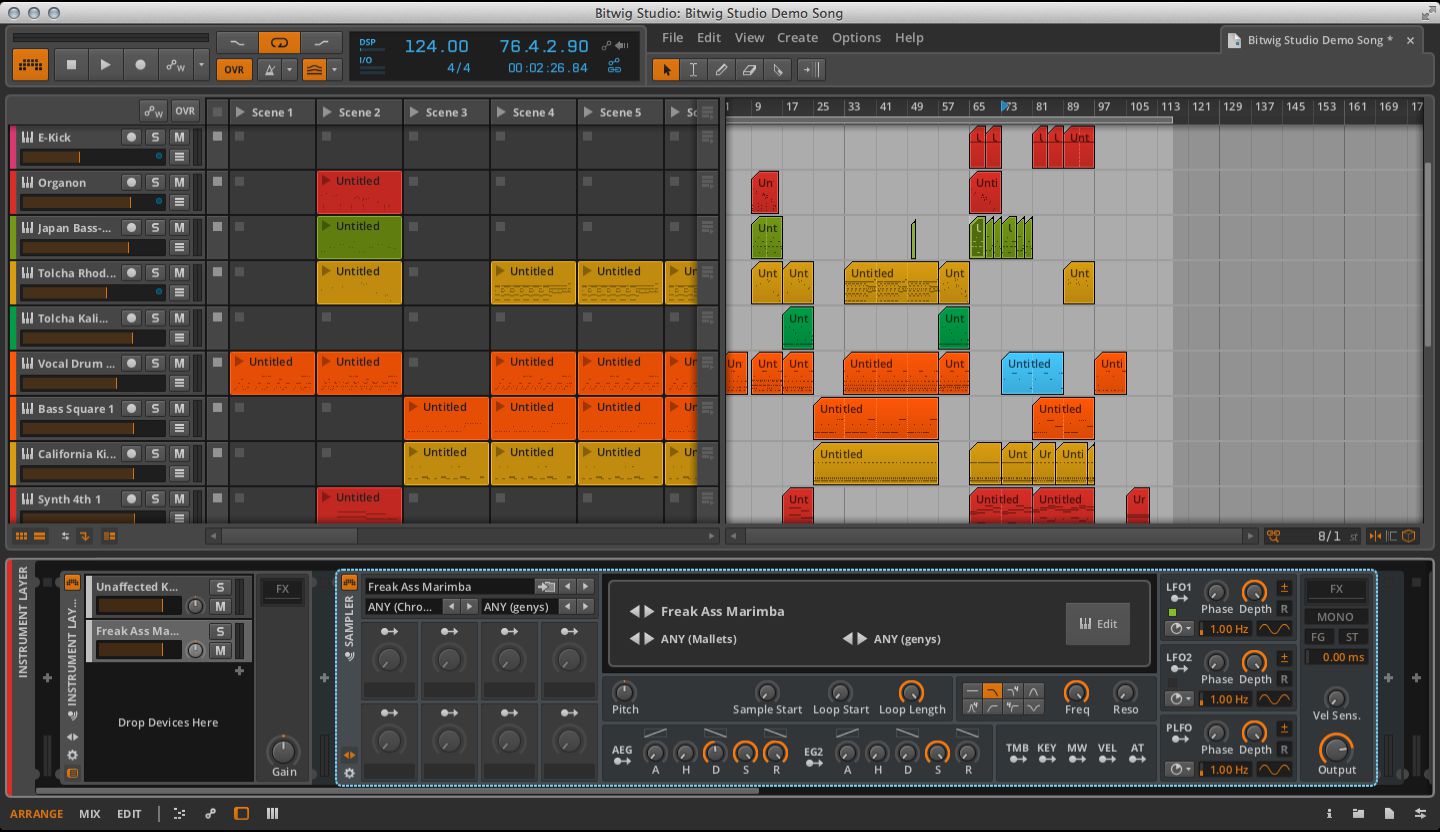 Bitwig's Sampler is loaded with an included preset.

Out of the box you can expect virtual analog, FM synthesis, organ emulations, a full-blown sampler, drum synthesis and a dedicated drum machine. Add to this a pretty long list of effects including a very strong reverb, a trio of EQs and a whole suite of dynamics processors and you should be well on your way. 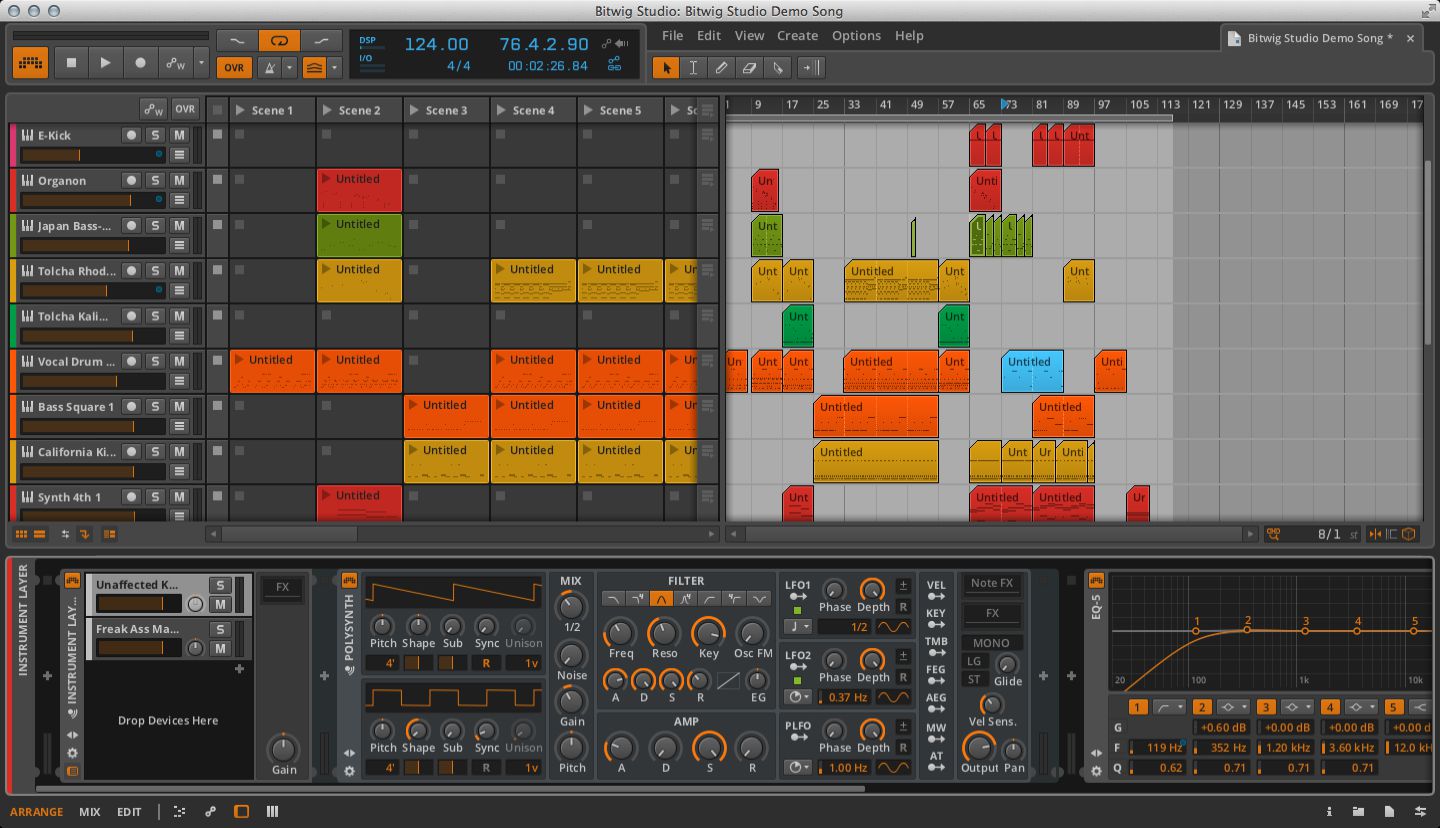 Polysynth as part of an instrument layer.

On top of all of this, Bitwig also allows you to incorporate your external hardware instruments and effects into your mix. A couple of simple plug-ins are supplied to take care of these duties and once set up, your routings can be quickly stored for instant recall. This will be a plus for anyone with racks full of gear.

Bitwig breaks new ground in so many areas that it's hard to focus on the best bits. For me, highlights have to be the innovative modulation system. Not only is it super simple to map a modulator to a destination, but you can actually create modulation links between devices in the same layer. For example a synth's LFO can be used to modulate a reverb's decay time. 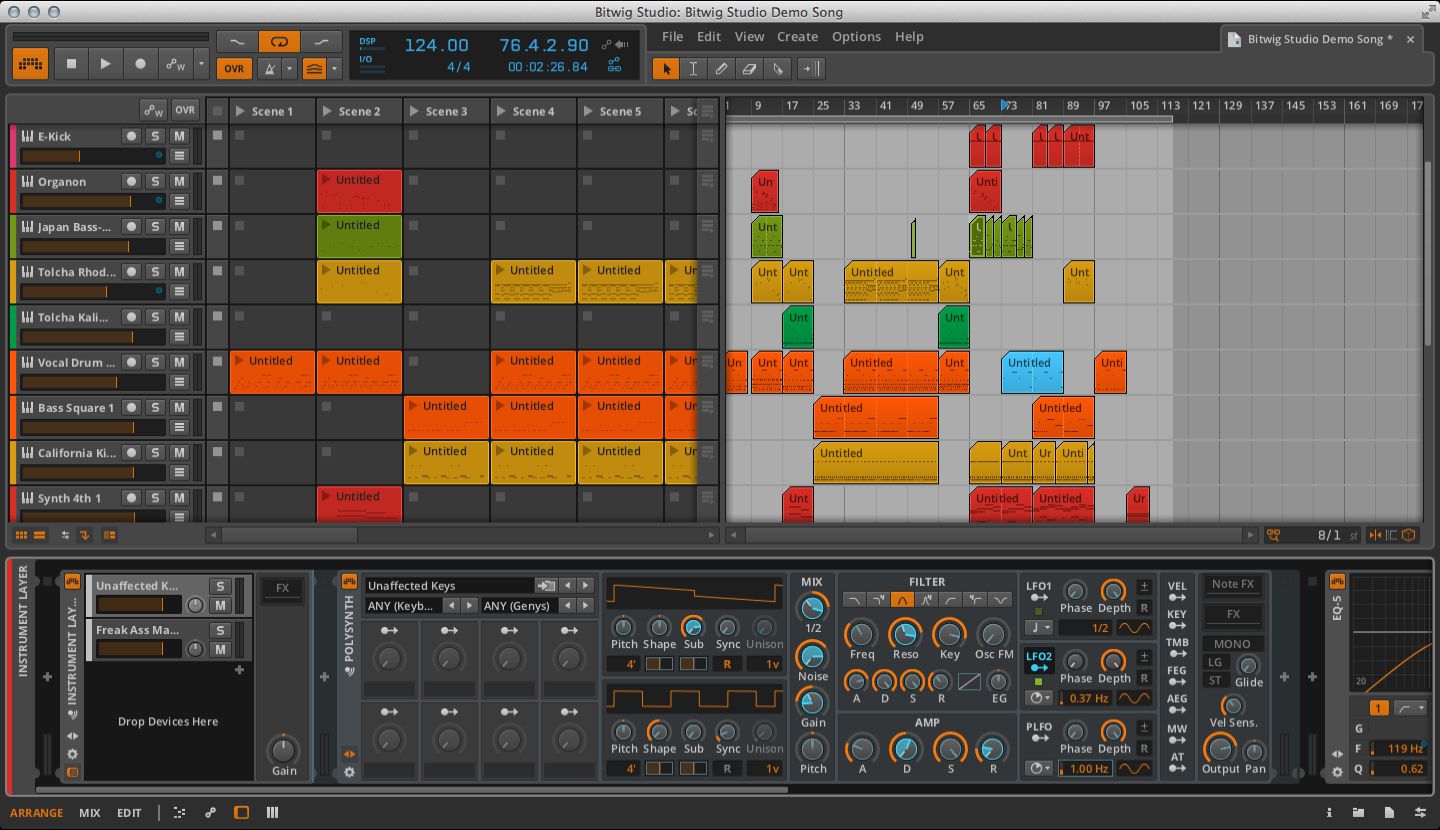 Some modulation mappings being set.

It looks like Bitwig intends to take this further with a later update. This will include the introduction of a fully modular system, allowing you to map modulation routings between any device in your project. This is pretty cool stuff to say the least.

Other key features that are worth shouting about here are sandboxed plug-ins which allow you to track down pesky crashes and ensure that the whole system continues to run even if a single plug-in fails. 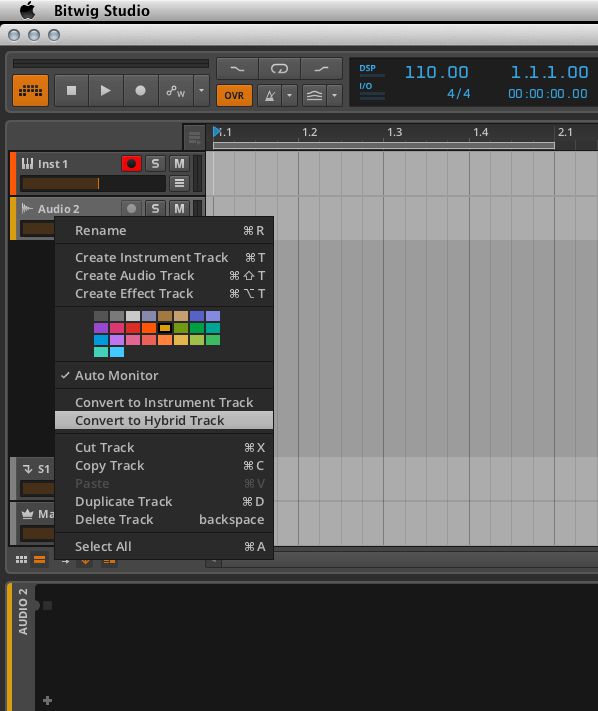 A standard track being converted to hybrid.

Another workflow-based breakthrough is the excellent 'hybrid' track. This clever (but simple) idea is essentially a track that can play back both MIDI and audio. This means you can bounce MIDI or audio in place and leave them on the same track. So simple but very effective.

Although I'm not totally convinced that Bitwig is the true game changer that some have predicted, it's certainly a step in the right direction. It's snappy, intuitive and most importantly has some truly innovative features.

While other DAW manufacturers are revamping old code, it's good to see someone bring something genuinely fresh to the table. I had to keep reminding myself that this is still at V1.0 for such a young product it feels really stable. Future updates will surely make what is already a solid app even better.

Bitwig is genuinely enjoyable to use and you should find that regardless of the DAW you currently use, you'll be up and running in moments. Most of the time, I forgot I was using a new app, everything felt fluid and natural. If you have been yearning for a new way to make music or just fancy a change, Bitwig could be the app you've been looking for.

lostinthesound
Great write-up Mo. Any thoughts as to why Bitwig didn't opt to offer a slight price break for purchase of the DL version vs retail box a la Ableton?
Mo Volans
Yep they may have missed a trick here but I guess the thinking is that most people will opt for the download anyway. We get to save trees that way ;)
Haligator
Yeah that's what we needed another DAW. I use Logic Pro X and it's half the price. And if I wanted something like this I would go with Abelton Live. Sorry not at all impressed. I can't see anything that would make me switch.

Mo Volans
So you'll be buying it then?