Language
With their earlier JamUp app, Positive Grid made a splash with guitarists. Now with BIAS FX, they hope to bring on a flood. Matthew Loel T. Hepworth takes the plunge to find out more.

The year was 1980. I was 13-years-old and had just spent fifty hard-earned bucks from my paper route on a used electric guitar. My old man helped me buy a small guitar amp, and then all I needed was a stomp box, preferably an Ibanez Tube Screamer. Alas, I'd need to deliver papers for another year before I could buy that green machine. Fast forward to today, and a mere $29.99 buys BIAS FX: an entire virtual pedalboard for iPad (with Desktop access coming soon). It includes a wealth of stomp boxes, but also has amplifiers, cabinets, and other effects I could only dream about in 1980. But really, how good can it possibly sound? I'll discuss the sound later, but let's look at the basics first.

BIAS FX can be purchased from The App Store and runs on iPad 2 and above, and the iPad Mini, all of which require iOS 8 and Internet access should you wish to connect to Positive Grid's online pedalboard library called Tone Cloud. (Login required.)

Because iPads don't have audio inputs, you'll need some sort of audio interface, as well as Apple's Camera Connection Kit, which basically gives an iPad a USB port to connect the interface. The audio interface replaces the audio output of the iPad and provides audio inputs for guitars, basses, and other audio sources. In my tests, I used a Steinberg UR44 in Class Compliant mode and it worked flawlessly.

However, to use BIAS FX properly, you'll need to make sure the input signal from the guitar is not mixed with the processed signal generated by the app. For interfaces that have an ''input-DAW' knob (or something like it), it's as easy as turning it all the way to one side, usually clockwise. For interfaces like the UR44 that offer more exotic monitoring capabilities, you may need another app to disable the monitored input signal of the interface. In my case, I needed to download Steinberg's free dspMixFx app and hit the 'mute' button on channel 1. Consult the manual of your audio interface for more information.

BIAS FX can run either as a stand-alone app, or as an Inter-App Audio program inside another audio app. The latter gives you the ability to use it in a DAW app along with other audio and instrument tracks. I started in stand-alone mode first to learn the user interface. 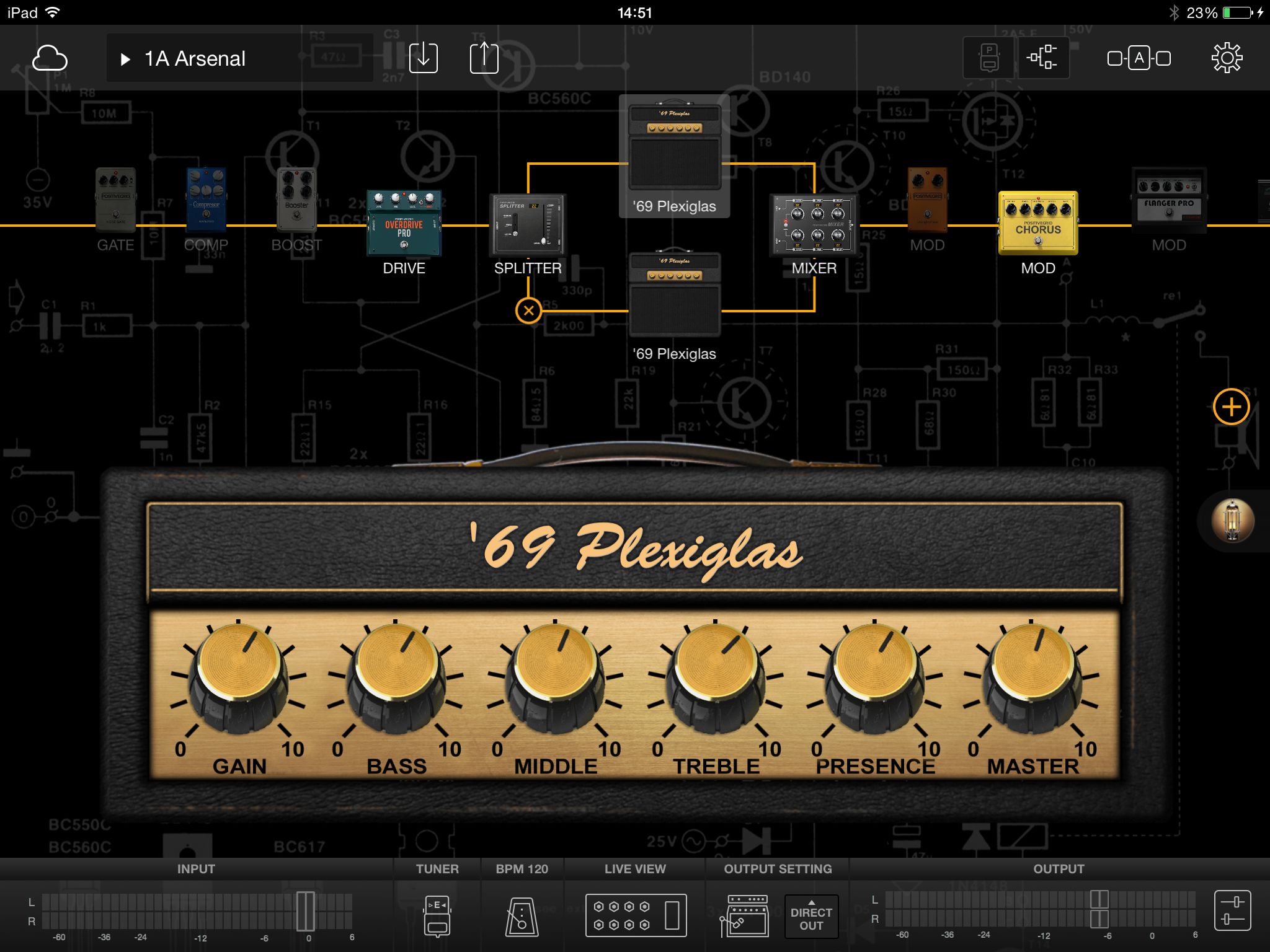 At the top of the screen you'll see a left-to-right (or right-to-left if so desired) depiction of the pedalboard signal flow, along with all the components of the currently loaded preset, the order of which can be changed by tapping, holding, and dragging the icons. Taping on any component will reveal a skeuomorphic depiction of its controls. In other words, tapping the 808 OD pedal icon brings you up close and personal with the virtual controls of a virtual Tube Screamer pedal. This allows you to enable or 'stomp' on the box, as well as adjust the controls. BIAS FX currently has 25 different stomp boxes, as well as 5 studio processors based on rack-mounted effects. Positive Grid has also promised to increase those herds as time goes on.

For amplifiers, there are 12 models to choose from, as well as the ability to import new models designed in BIAS AMP (purchased separately). You can also add a splitter that gives you the ability to use two different amp models in parallel, then use the mixer component to balance and pan the outputs of both. This is great for creating complex tones like the great Stevie Ray Vaughan and Brad Gillis did with real amps. As with the stomp boxes, accessing the front panel controls of the amps is done by tapping their icons.

At the bottom of the window you'll find input/output meters and controls, as well as the tuner and a metronome for practicing your chops. There's also a Live View window which lets you assign presets to four large onscreen buttons, the idea for which is to give you quick access to your presets in a live situation. Switching presets is fairly quick, but you will experience a short (25 ms or so, depending upon vintage of iPad) pause during the switch, as well as a noticeable 'pop' even when you aren't playing the guitar. Underneath the preset buttons are four additional buttons for turning off the Drive, Mod, Delay, and Reverb components of the currently loaded preset. You can also make selections via MIDI, which gives live performers with MIDI-compatible pedalboards hands-free access to their patches and components. 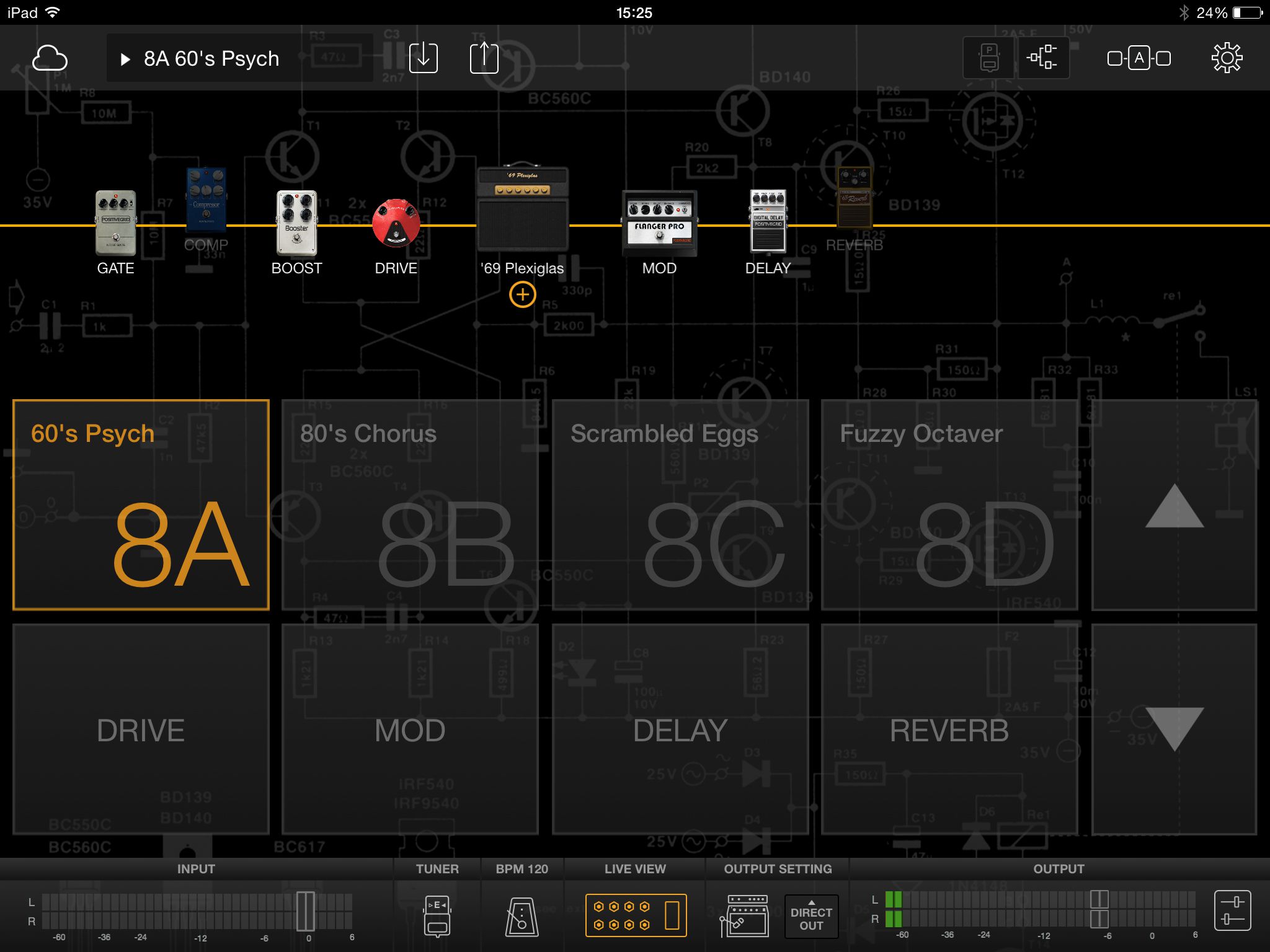 Next to the Live View is the Output Settings panel. This gives you four different ways to use BIAS FX with real amps and cabinets, as well as having those components generated virtually inside the app. Those four Global Settings are Amp Front, Combo Poweramp, Stack Poweramp, and Direct Out. Since I was connecting my audio interface directly to studio monitor speakers, I chose Direct Out. But If I wanted to use BIAS FX with my guitar amp with only the front input, I would choose Amp Front—the result being the removal of the virtual amp and speaker characteristics from BIAS FX. Basically, since a real guitar amp inherently has those tonal characteristics, BIAS FX won't try to recreate them virtually. (Note: When using BIAS FX with a guitar amp or any monophonic audio system, make sure to disable Stereo Mode in the Settings window.) 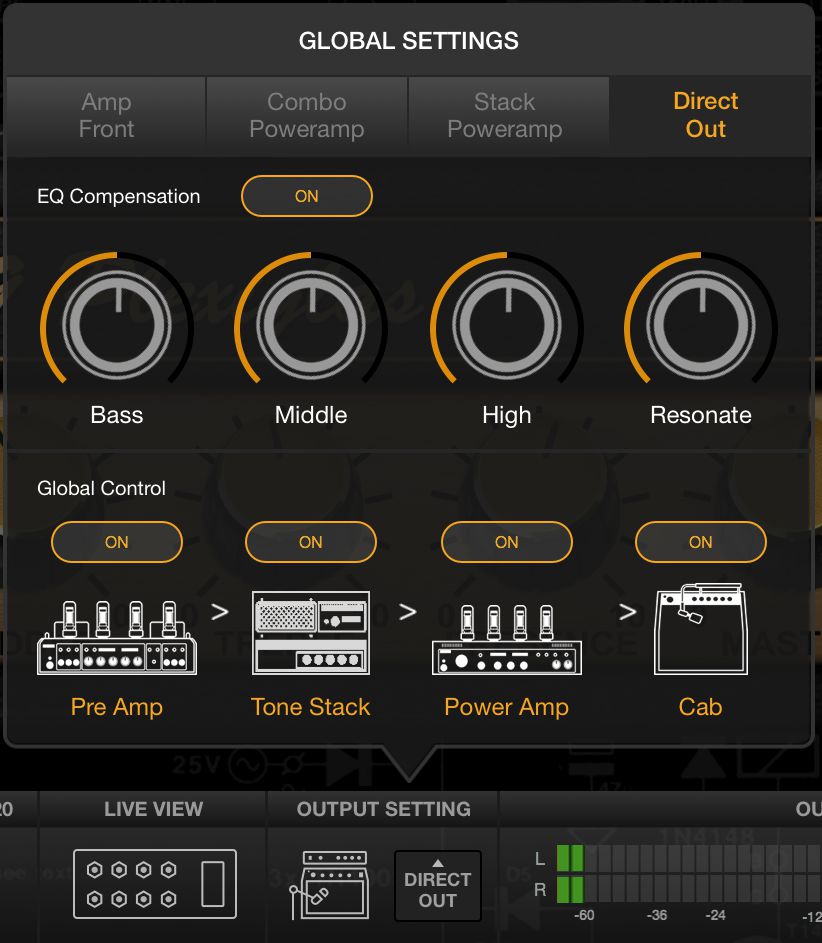 If you have a later-model iPad, I highly recommend going to the Settings and enabling the Ultra Low Latency mode. This makes it much more responsive and playable, with the trade-off being increased CPU usage. (More on that in a moment.)

Even though the user interface of BIAS FX is extremely slick, gorgeous, easy to use, and user-friendly, I was fully prepared to be disappointed by the sound. But I'm happy to report that it truly looks as good as it sounds. (Note: Version 1.01 made some serious improvements to both the app and the sound quality, so make sure you keep it updated.) I played with BIAS FX in stand-alone mode for hours and had a blast making my own pedalboards. Unlike some other virtual guitar modeling apps and hardware products, I could even use the volume knob on my guitar to alter the crunch of the amps and stomp boxes. However, any preset (like 80's Metal or USA Metal) that uses high-gain components will probably have a noise gate in the signal flow, and that will negate the effectiveness of the guitar volume knob. I tried removing the gate to see if that would help, but the resulting deluge of gain hiss made using the gate compulsory.

I also tested BIAS FX in Inter-Application mode with Cubasis and it worked just as it should. However, the Cubasis CPU indicator really lit up when I put BIAS FX on an audio track. Because I'm using an iPad Air 2 (the fastest iPad available at the time this review was written), it's possible that projects with lots of virtual instruments and effects may not have enough room on the CPU for BIAS FX. If that happens to you, try disabling the Ultra Low Latency mode. However, in Cubasis and some other iOS DAW apps, it's easy to freeze the track and then turn off the plug-in, thereby sparing the CPU from being driven so profoundly. Also be aware that only one instance of BIAS FX can be run in Inter-App mode, which would also require you to freeze each guitar track before using it again on another track. This isn't a limitation of BIAS FX, rather it's the way Inter-App mode works in the iOS 8 world.

Provided you already have an iPad, an audio interface, and an Apple Camera Connection kit, BIAS FX is cheap, cheap, CHEAP! It gives you tons of high-quality virtual pedalboards, as well as access to Tone Cloud for even more configurations. It sounds great and only has a few minor issues. It will be interesting to see what more Positive Grid will bring to the BIAS FX pedalscape, especially considering it's very young at version 1.0.1 Until then, I have no doubt that BIAS FX will give guitarists unique and creative ways to make more music with their iPads.

Stefano
Hi Matthew,
I purchased Bias FX and it's awesome! however, I'm a bass player and I purchased bass expansion pack and Poli octaves as well, and I'm experiencing latency issues using bass octaves or poli octave even in low latency mode or not.
I'm using an iPad air (1st gen) and an iRig HD 2 as audio interface.
CPU consumption is very low and I've no latency issues with any of the other stomp boxes, no matter if I use one stomp box or 10 of them... I have absolutely no latency at all. I have latency issues only using octaves that are a must have for a bass player (I use Bias FX for gig plugged into my real amp and a bluetooth pedal board).
I can't find any suggestion on internet, so I need to ask you if you have any idea of what can I do: can the audio interface be the problem? in this case I can buy a new one; or can the iPad air (1st gen) be the problem? in this case I will not buy a new one, a real octaves stomp box is less expensive then an iPad.

I hope you can see this question and can answer it.
thank you.

I'm sorry you're having latency issues with Poli Octaves. I don't own that, nor do I own the Bass Expansion Pack, so I can't try and replicate the problem on my iPad. However, I did send Positive Grid a link to your comment. I'm not sure if they're back from the holiday break yet, but I hope they can help you resolve your problem. I'll keep my eyes open for their response.

Here's the response I received from Tony at Positive Grid:

This isn't something i've heard of yet. Here are my recommendations.

- Uninstall and reinstall the app. This will reset the cache and bring the app up to speed.
- If he has another interface that he can use please have him try that.

And if he is still having the issue please feel free to communicate with me directly. here: