Loopop checks out these cool hardware synth units from Bastl and Gecho in his latest video. It turns out they are very different - but which one did he prefer?

Tireless synth enthusiast and friend of Ask.Audio, Loopop, has been busy yet again, this time reviewing the Bastl SoftPop and Gecho Loopsynth hardware units while on the road. So we're pleased to bring you his review - complete with video, which you can view below. If you're eager to skip straight to one synth or the other, you'll find Softpop starting at 00.45s and Loopsynth at 7m55s.

Let’s start with SoftPop. It’s described by the company as a psychedelic analog synth creature with a wet sound and a rowdy spirit, and indeed that’s a pretty fair description. Don’t say you haven’t been warned – if you’re familiar with synths, this one is very different, because psychedelic and rowdy it indeed is. Its basic components seem innocent enough – they’re what you might find in other semi-modular synths. Two oscillators, which can both behave as LFOs, a filter, a sample and hold circuit, a sequencer and a patch bay for rewiring it internally or connecting to external modular gear. It all starts out very normal. 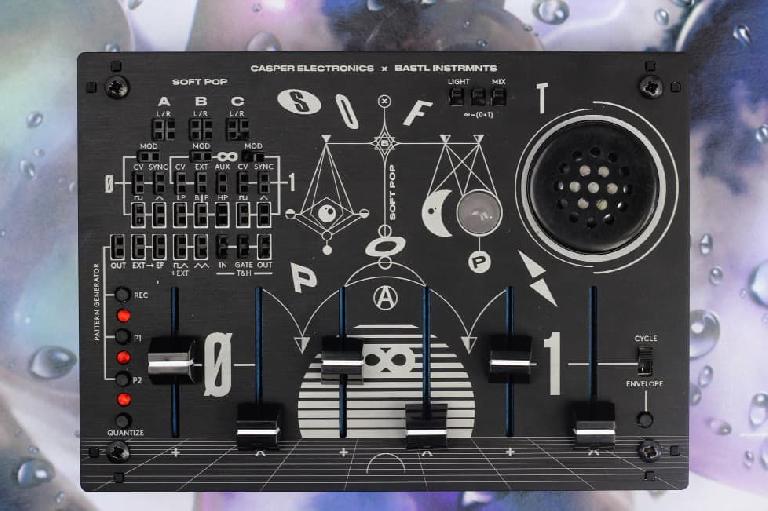 Other than being a digital sequencer, SoftPop is an entirely analog synth and it sounds great, with deep basses and a squelchy filter. SoftPop can be either USB or battery powered by 4 AA batteries and also has a speaker which I guess is good for emergency situations but doesn’t do its sound justice. In terms of physical controls, the oscillators and filter each have dedicated frequency control sliders, and are each paired with a modulation slider, fed by whatever is patched into it by default or using the extensive patch bay.

Softpop has a big colorful LED which changes color based on inputs from both VCOs and the filter, and underlines this synth's bubbly character. The sequencer is quite basic – you can store two patterns – but recording them is a bit of a challenge because you’re storing slider positions played in realtime, timed to the clock in VCO1. So you’re not going to be programming complete songs in here note by note, but rather motion sequencing repetitive and potentially interesting patterns. There’s a semitone quantizer built-in to help with the tonality, but it would have been really nice if there was a way to upgrade the firmware here to include quantization into scales. Perhaps in the future.

Other controls are the filter resonance, which is for some reason placed on the side panel and rather inconvenient to use. It would have been better served with an on-board knob or slider, as I found myself using it quite a lot to shape the sound. Other side panel controls are the external input level, overall volume, and a fine-tuning control for VCO0.

While we’re on the topic of overall volume, there’s one component which isn’t here, and that’s a VCA – so it’s kind of hard to get SoftPop to just give it a rest sometimes… but ultimately there are ways around that limitation by closing the filter or slowing down the VCOs.

Now if all this wet drippy craziness isn’t for you, you can strip SoftPop of its bubbly mojo by disconnecting the default wirings using the so called “Secret Chamber” in the back – just slide the dip switches over and SoftPop will step by step become tame like any other synth, unless you start messing with it using the patch bay. The Secret Chamber also give you access to the sequencer chip, so presumably in the future, additional functionality might be added.

Aside from disconnecting the predefined wirings of SoftPop through the Secret Chamber, you also have a comprehensive 25-jack patch bay. This patch bay is like what you would expect with semi modular synths, but due to its size, it uses small size patch cables instead of the regular 3.5mm ones. It takes a bit of getting used to using these small cables, but their compact size allows for each jack to have double the number of connectors, which is very useful as it saves you the need for a splitter. The Patch Bay has a few features that you can’t access with the default patching, for example an Envelope Follower which is a great way to align SoftPop’s modulation with an external audio source, and the low pass and high pass outputs of the filter. Without any patching, band pass is the default filter connected to the output.

You can also hook SoftPop into regular Eurorack gear using three standard 3.5mm jacks in the back, which can be doubled using a stereo to mono insert type cable. Each of these 3.5mm jacks is represented on the top of the patch bay, and can be used as inputs or outputs, however you like, based on what you connect them to. Your imagination is the limit in terms of what can be hooked up here, but some “low imagination” options I found particularly useful are synchronizing clocks and connecting a “normal” note based CV/gate sequencer to run SoftPop more melodically.

On the pro side, Softpop is a very original synth. It’s all analog (except for the sequencer), it sounds great, and due to the default routings very very different. It’s highly portable, sturdy and with the patch bay, infinitely extendable and flexible. You can reroute it in many different ways and get endlessly creative. On the cons side, the first thing I would mention is price – at around $400 it’s not cheap. As I mentioned before it would have benefited from a VCA and envelope, and a more conveniently placed resonance control. If you want a synth that would just behave itself, this isn’t for you. But all that said, if I look at its purpose, which is portable madness in a box, SoftPop is a very interesting portable music companion that will keep a curious mind busy for quite some time. SoftPop is less of a synth and more of a puzzle just waiting to be explored. 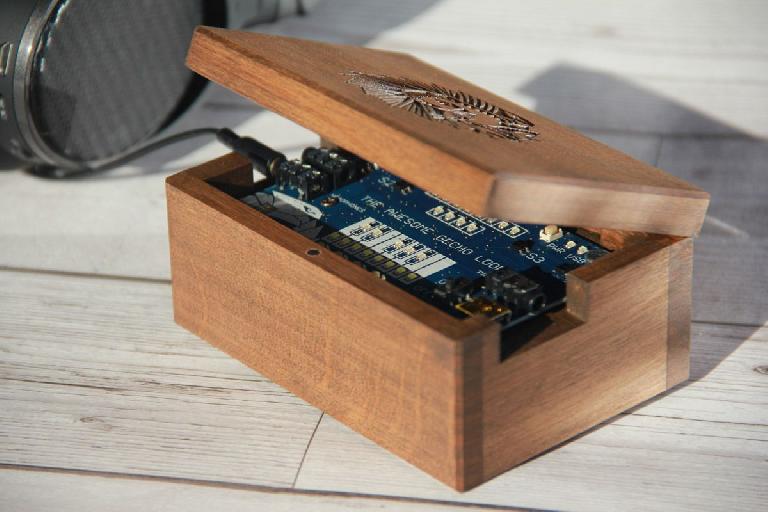 Gecho’s Loopsynth is an entirely different portable music companion. Powered by USB or 3 AA batteries and housed in a beautiful wooden box with calm and colorful LEDs, Gecho’s Loopsynth is just what the doctor ordered after the psychedelic SoftPop party. A serene, meditative, pleasant friend to chill with.

Loopsynth is all about physical interaction. It has two highly sensitive microphones and four infrared distance sensors. It can also rather precisely detect the presence and location of nearby magnets too. You can replace the audio captured with the mics using a dedicated stereo line in jack, and there are two audio outputs to share the music with a friend.

What powers Loopsynth is a digital sound engine that can be potentially programmed to do anything, has dozens of algorithms with different takes on creating engaging and ambient soundscapes and can be modulated with sounds coming in through the microphones and audio in, or gestures made in the air in proximity to the sensors. You have four buttons that let you select channels and control various aspects of a channel while it’s running - for example, the delay time of an echo, whether the input used is the microphones or line in, or program in chord sequences.

If I had to group the algorithms by type, there are around four basic types:

All of these result in an experience that’s quite soothing and engaging, and can suck you in for quite some time. These are best heard in the video above.

Loopsynth is a truly unique box of lights, sensors and sound. It’s a great standalone ambient soundscaping tool and also partners very well with other instruments as an effects box or granular sampler. That’s on the pros side. In terms of “cons”, the buttons and sensors are slightly too close to each other. Entering chords was a bit tough with my big fingers because it requires pressing more than one button at a time, so perhaps in a future version the buttons can be spaced apart a bit more. 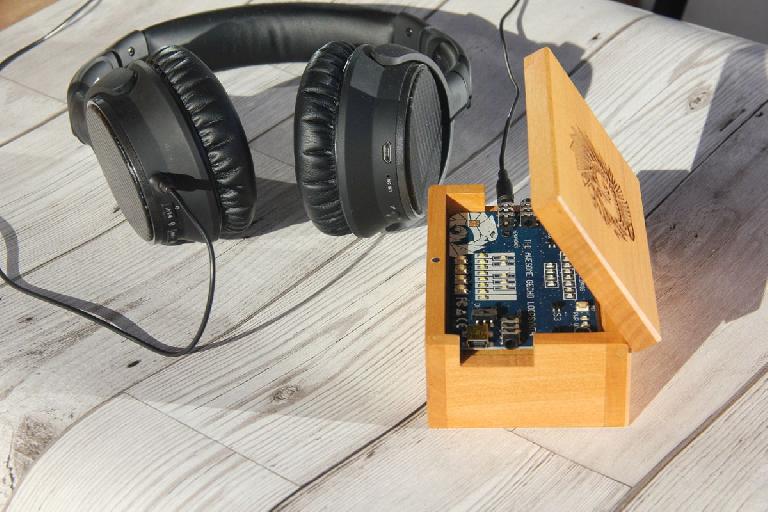 Each of the two groups of IR sensors on either side are also quite close, which makes triggering them individually a bit of a challenge though it invites happy accidents when you use them together. Finally, you need to type in a code number for each channel, so you’ll need a cheat sheet with the channel numbers nearby.

Gecho Loopsynth and Bastl Softpop are two very different, very odd and very engaging portable companions that are worth a look if you’re interested in a different way of creating sounds, soundscapes and music. Their portability and small size make them great companions for solo synthing, as well as for livening up a setup with exciting, engaging and certainly non-traditional sounds.