Review: BandLab, Cloud-Based DAW That Could Change Everything

Language
If you thought that online DAWs were a pale imitation of the real thing, BandLab may very well be the one that makes you change your mind.

With the lightning speed of both web apps and web content delivery only getting faster, it was simply a matter of time before a truly online, cloud-based DAW became a reality. While many manufacturers of Digital Audio Workstations are beginning to integrate some basic cloud features, BandLab (www.bandlab.com) is a DAW that was truly built from the ground up in the cloud. I checked them out at NAMM 2017 and spent some time trying out their service both at the show and once I got back to AskAudio East Coast HQ, and what I found was nothing less than spectacular.

This Can’t Actually Be Good, Can It?

Trust me, that’s the first question that came to my mind. Hang around in the music tech business long enough, and you’ll go through a skeptical phase now and then. My first thought was, if it’s over the internet, how could the sound quality possibly be good and still have low enough latency to be playable and workable? 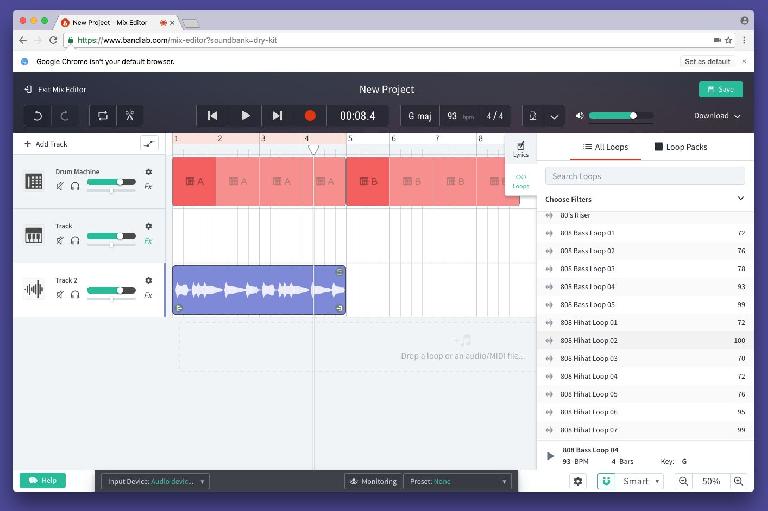 I’m happy to report, that yes… BandLab is good. In fact, BandLab is pretty freaking great. Most of the heavy lifting takes place server-side, so whether you’re using a MIDI keyboard or the computer keyboard with a ‘midi keys’ style entry, you’ll notice very little latency at all. The instrument sounds are very lightweight and load up incredibly quickly. The experience does not, in any way, feel like a ‘watered down’ web version of a DAW. BandLab is a robustly featured DAW that has simply been scaled down to essentials to promote web and cloud collaboration.

I’d confidently place BandLab somewhere in between GarageBand and Logic in terms of feature set. It’s as simple to use as GarageBand for sure, but it has some pretty top shelf features like tap tempo, magnetic timeline, lyric editor, and version tracking that definitely put it in a slightly higher category. 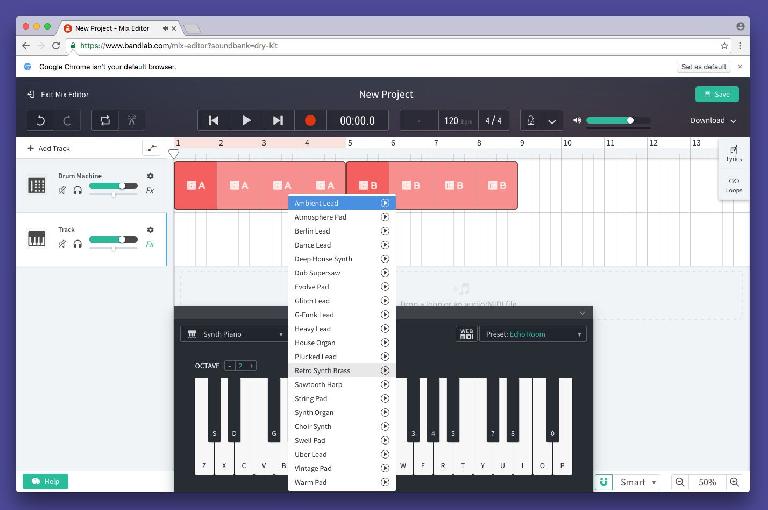 The sounds were definitely better than I expected, and it’s clear the BandLab team opted to focus on putting a little more horsepower to the ‘studio staples’ like grand piano, drum set, bass and so on. The sound set itself is definitely pretty basic, but then again, you can’t really expect it to hold up against, say, a 25GB piano library. These sounds literally load up within seconds in your browser, and you can play and record with them in real time on any device from iOS to ChromeBook to a workstation. You can even export all the tracks from a BandLab document as WAV files to import to a desktop DAW later on!

BandLab was clearly developed with collaboration in mind. You can create a ‘band’ with other users, all have access to the same set of songs, work on songs together, and even utilize ‘forks’. Forks are essentially different versions of the same source material that split off from each other (like a fork in the road). Say your bassist writes a tune, you can create a fork which leaves his or her original version alone, but lets you make some adjustments to compare and contrast with later. It’s simple to use and understand, and it makes BandLab that much more fun to use. 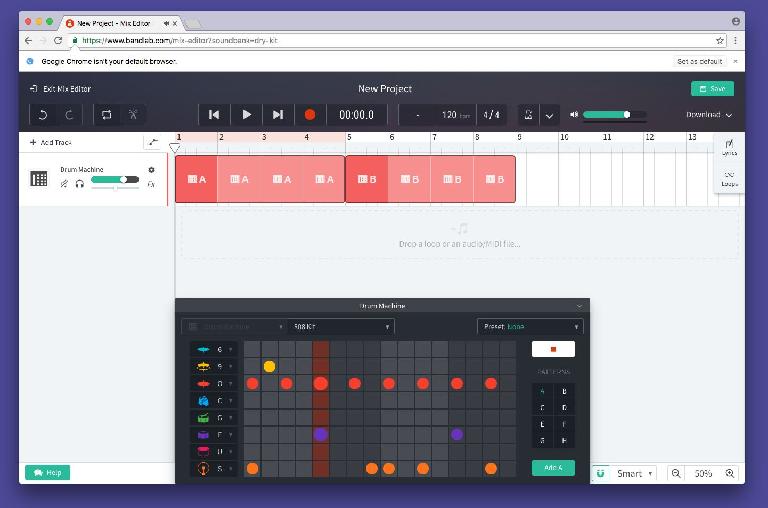 BandLab was one of the few things I saw at NAMM that truly surprised me. The software delivered on its promise to be a lightweight, cloud-based solution to composing. It really breaks down the technical barriers, and now that BandLab is out in the world there’s really no reason everyone in your band couldn’t collaborate on the same document and write some tunes together. As an educational tool it’s both free and easy to use, and no deployment or installation is necessary. As a cloud collaboration platform for your musical partners, it’s pretty much second to none. If the current version I used is their starting point, I think it’s safe to say we can expect some really fantastic things coming out of the BandLab universe very soon!

Pros: It’s free, it runs in a browser, virtual limitless compatibility and collaboration, a glimpse into the future.

Cons: iOS app is quirky on iPad and they’re just getting started with their sound library. This app is very much in its infancy, though - I can’t wait to see where it goes!

Miaousse
Ohm studio from Ohm Force is already existing and cloud based and has a destop application, it has also a paid version including ohm force plugins.
Matt Vanacoro
Ohm Force does indeed look exciting, but it's a very different animal. BandLab runs *completely* in a browser, on just about any computer, with no app needed. It's also free! I encourage you to check it out.