Finding a good step sequencer out of the myriad of Max for Live devices is no easy feat. There are many to choose from, and for good reason, they make music making so much faster and organic, in terms of the creation process. The organic creation process can become a little repetitious over time, though. After all, the bass you create in a step sequencer will always play back the same sequence, over and over again, and that's that.

Autobeat (currently €23 on the Ableton store) from K-Devices seeks to remedy this situation for drums, as well as midi instruments. You are able to define the keys/notes that you want to play all the time, as well as define the keys/notes that you want to play some of the time. In other words, Autobeat randomly adds in drum fills, and keys.  If you're a lazy drum programmer, like me, this is a dream. After all, going through each section of the song adding crashes, fills, and so on can get a little old. And, if you're doing a lot of live MIDI, this can be especially helpful when improvising.

Let's see how well Autobeat does, and what it's all about.

The Autobeat interface, if you're used to most Ableton devices, will be picked up easily. There are 8 pads that trigger specified notes. Each pad can be modified to trigger other notes, so you can always make sure that your drum kit is covered. Octave buttons allow you to quickly switch between different key ranges. Unfortunately, the Octave buttons also pitch Autobeats focus up, or down an octave as well. So, you really only get 8 pads. But, this isn't a bad thing. Shifting Octaves can be wonderful for free form fills.

Once you select a note, you draw in the Chance of how likely the selected note will play. So, C1 is triggering your kick drum, you can draw in a 100% chance that the 1, the 4, the 8 and so on will play every time. But, the notes that aren't drawn in for 100% of the time will only play randomly, based on the likelihood you've assigned. It's very similar to using DB Glitch, or Beat Repeat, but it's MIDI notes, instead.

You can also program velocities in Autobeat, as well. There's a toggle for Chance and Velocity. Once in the Velocity mode, you can set up your rhythms just like you normally would in any other step sequencer. Resolution, Length and the Amount of Steps that you get are all covered as well, and are marked clearly. I found myself doing some complicated stuff, in no time... Or, at least what I thought of as complicated.

One extremely cool feature is the Fill feature. You can set up patterns to act as a Fill, and in turn, this fill that is assigned to the Fill button can be triggered at any time from Autobeat's interface, which can also be MIDI mapped, and so on. You can also press one of the the Store Clip buttons. There are 4 buttons, each one set up for 1, 2, 4 and 8 bar lengths. When you press one of these buttons, Autobeat generates a standard Ableton MIDI Clip, and places the clip in the Session View slot that coincides with the Autobeat track you're working with. 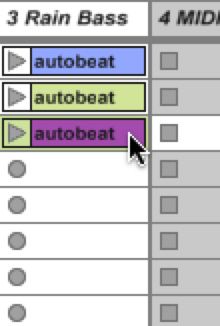 Autobeat has several things going for it. Firstly, it's inexpensive for the productivity that you'll get from this Max 4 Live plug-in. Randomly creating drum patterns, and melodies becomes extremely easy with this device. Aside from the possibility of a never ending stack of beats and melodies, it's also polished. An extremely well done manual is included. So, even if you're still new to M4L and Ableton, you'll find yourself getting in to some pretty advanced beats before you know it. Oh, and it includes Drum Racks, too!