When WaveMachine Labs released Auria a few years back, it pretty much redefined what people came to expect they could achieve on iPad. It was the first DAW for iOS that really looked and felt like the kind of software we were used to using on the desktop. GarageBand is very cheap, yes, but it’s still much more focused on regular than professional users. Some time later, Steinberg released Cubasis, which has matured into an extremely capable DAW for iPad and arguably overtook Auria in some respects, particularly when it came to MIDI.

Now the second major release of Auria has arrived and it’s actually in two versions—Auria and Auria Pro, the latter of which is the version reviewed here. The difference in features is quite considerable and although the Pro version costs $20 more, you may well consider it a worthwhile upgrade. The Pro version is $50 which sounds like a lot for an iOS app, but this isn’t like any DAW you may have used on your iPad before. And if it really can do the work of a desktop DAW, that’s actually remarkably inexpensive. The version called “Auria” is an updated version of Auria 1 with a new look, and Auria Pro has a bunch of new features—it’s a little confusing but you can read a detailed feature comparison of the two versions at http://wavemachinelabs.com/Products/auria 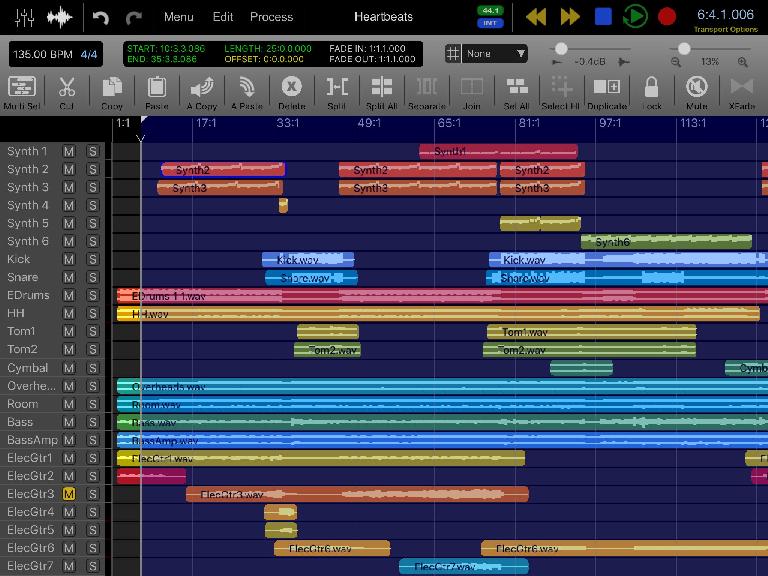 The developers recommend an iPad 4 or later and I’d say that is a bare minimum. Auria Pro is very capable, but with that functionality comes a hunger for power that you don’t get from simpler apps. Part of the problem is RAM, which used to be the bane of producers’ lives until computer RAM became cheap enough that you could fill your machine up with it without remortgaging your house. The iPad 4 and Air 1 have 1 GB of RAM, which works decently (I tested it on an Air 1) but does throw up the odd “low memory” warning. The Air 2 has 2 GB and the new iPad Pro has 4 GB, which I’d imagine would make Auria Pro absolutely fly. For most people though, you’ll need to keep an eye on the CPU meter, although track freezing is available per-track, which helps a lot. 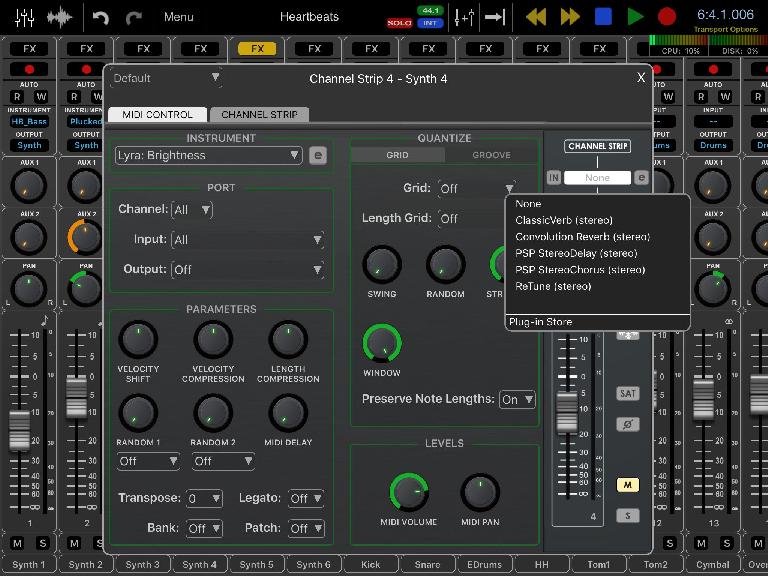 A channel strip, with the freeze button hidden under the inserts menu.

Auria Pro has had something of a visual overhaul. The first version tried a bit too hard to model “real” mixing hardware and ended up looking clinical to my eyes. The muted, functional aesthetic is still present but it’s been refined and simplified and is now rather easier to navigate and less tiring on the eyes. The developers have done a great job of getting a huge amount of functionality onto the iPad’s screen without using loads of pop ups. It’s reminiscent of the kinds of bespoke software applications that come with specialized hardware recorders such as RADAR, and if you have any familiarity at all with hardware recording it will be quite familiar. 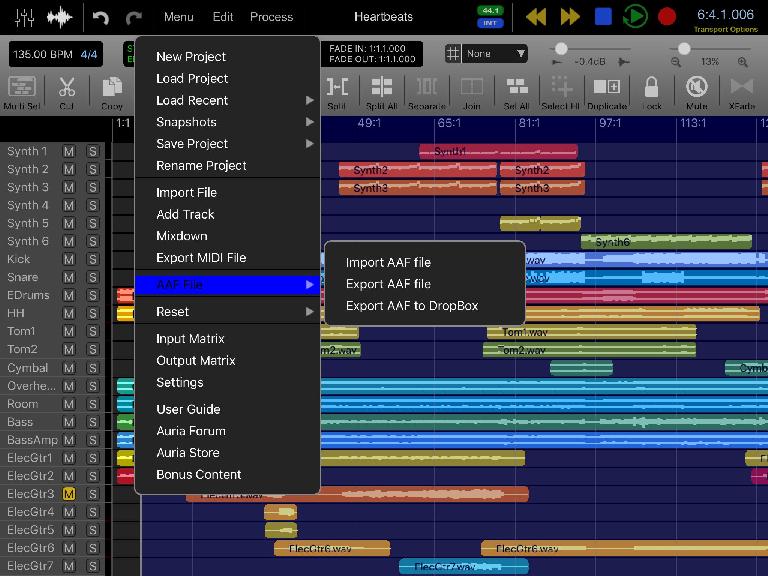 There are only a few main sections, all accessible from the toolbar running along the top. The mixer section scrolls left to right and can work in landscape or portrait mode, with portrait giving you extra-long faders which are great to work with. Sequencer mode works in landscape only but again scrolls, with all the audio processing and function tools listed along the top edge. A main drop-down menu provides access to all the project functions, and there’s a fully stocked Edit menu as well as a Process menu for audio clips. These really are as comprehensive as you’d find in a lot of desktop DAWs. 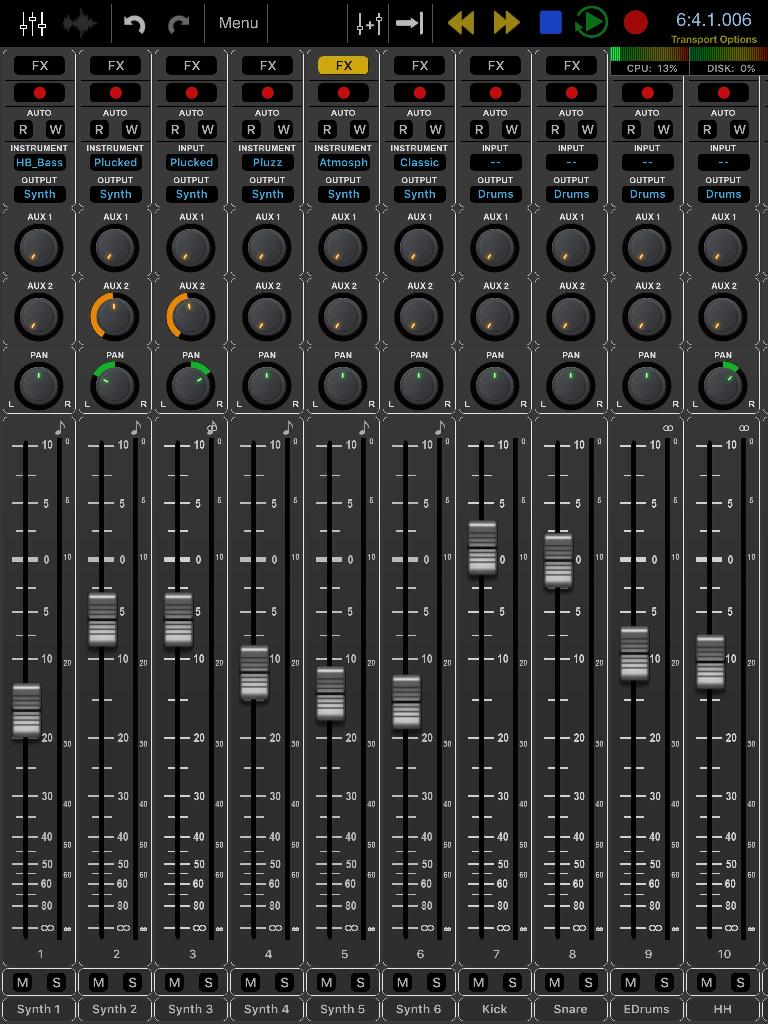 Flip into portrait mode to get extra-long faders.

Auria could always do audio tracking and supported add-on effects and instruments, but there’s a lot that’s new in the Pro version. First up is a full MIDI sequencer, an area where it lagged behind the competition. Happily it has more than made up for past omissions, and you can now connect any MIDI hardware or tap with your finger and record the built-in virtual instruments or third-party ones via virtual MIDI. There’s a full touch-enabled piano roll, quantizing and groove templates, tempo and time signature editing and MIDI processing like transpose and velocity compression. 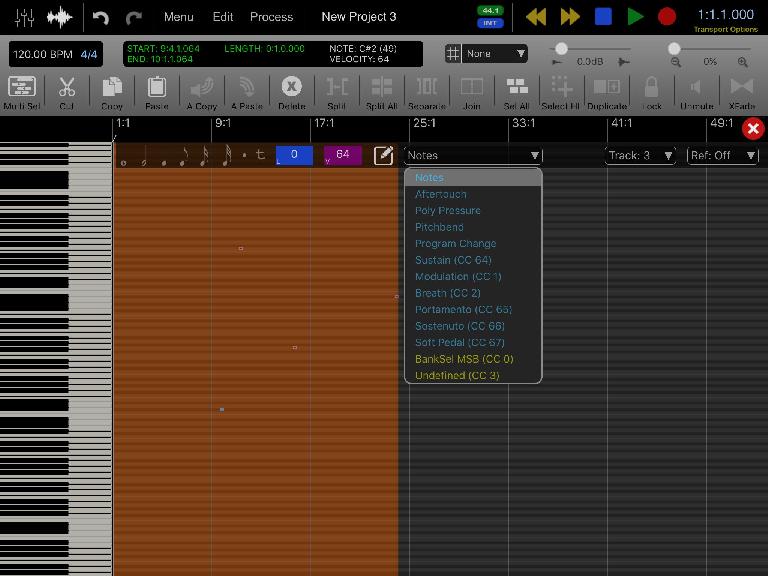 Speaking of instruments, the Lyra sample player is included and comes with a good selection of high quality sampled instruments in a number of categories. It supports SFZ, EXS and SF2 formats so you can add your own sounds, and since it streams from disk, it’s less prone to eating up large amounts of RAM. FabFilter’s Twin 2 and One synths are also included, both in special versions, and there’s a good selection of add-on instruments, effects and loops available to buy through the online store. A solid selection of effects is provided too including PSP’s StereoDelay. 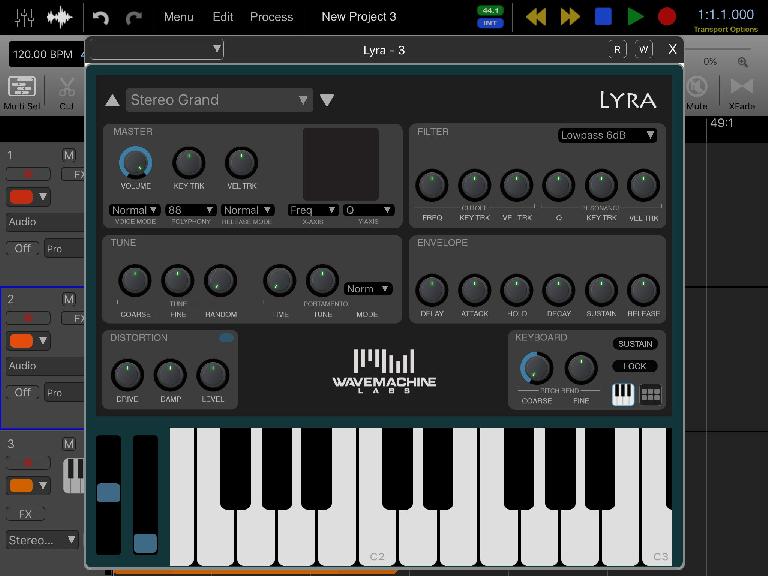 The Lyra sample player, complete with a bunch of instruments.

Audio gets a boost too, with a new real-time audio warping engine that uses élastique Pro v3 and transient detection to add warp markers to audio. These can be dragged with your fingers or quantized to change or correct timing, extracted from audio to MIDI and you can even do drums-to-MIDI using this technology. The mixer has been expanded and now has six aux sends and 32 separate buses for flexible routing. You can route in up to 24 audio channels at once with a compatible interface and each channel strip can be popped up to provide access to the whole set of controls for any channel, which works really well. 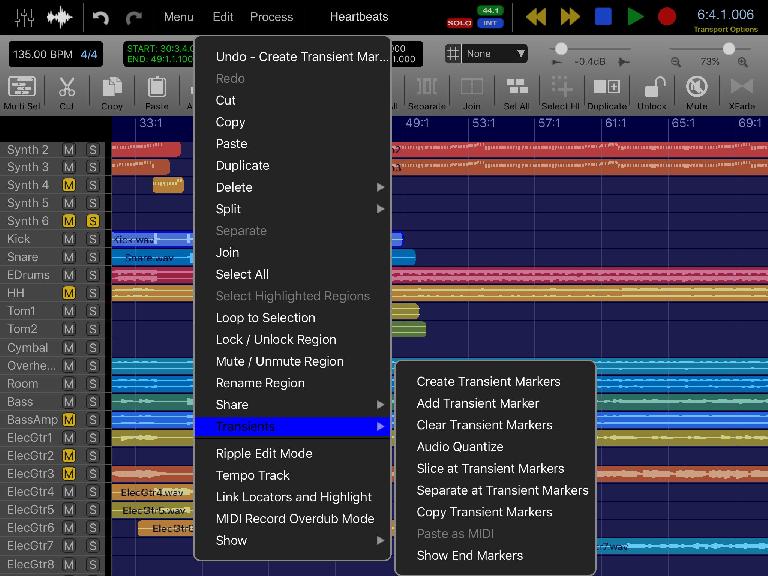 Slice up and quantize audio.

There’s even a special mastering strip which includes PSP MasterStrip with EQ, compression and limiting, and you can output to an audio file, upload a file or output to an AAF session which can then be opened in almost every serious desktop DAW. This is particularly useful since it doesn’t tie you to moving to one specific DAW if you decide you need more grunt than your iPad can offer. Last but not least, Auria Pro now supports iOS compatible hard drives, though only for backup and restore of projects, not for live recording. Still, it’s useful to have. Add instruments and effects from the Auria store.

Auria Pro is an awful lot of mobile DAW for the money. If your experience of mobile music making begins and ends with GarageBand, you’ll be astonished by what this app can do. There have been remarkably few concessions made to fit all this into the iPad and if you add the relevant hardware—an audio interface and/or a MIDI keyboard—you can achieve results just as good as you would with a laptop or desktop. There is a little graphical lag on my iPad Air—and I’d love to try it on an iPad Pro—but nothing showstopping. If you have a recent device and want to produce music seriously on it, Auria Pro is pretty hard to beat.

Cons: Likes a lot of power. Some slight visual lag now and again on iPad Air 1. To really get the benefit of all its features you’ll want to add a proper audio interface—though that’s true of any serious mobile DAW.