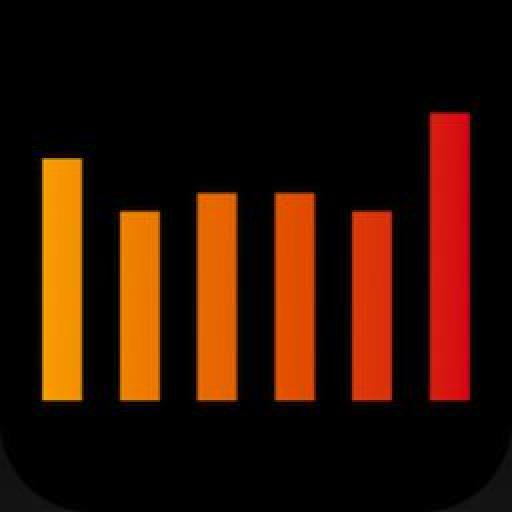 Language
As convenient and cool as an iPad is'¦ it lacks a pro level DAW that'll replace your need for a laptop. And then along came Auria HD! Is this the first "real" DAW for iPad?

Auria calls itself a DAW, not incorrectly, but is currently designed purely for the recording, editing and mixing of audio. Installation of Auria is just as simple as any other iOS app. The download is approximately 200 MB, which is between 10 and 100 times the size of a regular app. Comparatively, GarageBand weighs in at 1.1 GB, and that's because Auria does not include the sample and loop content that is fundamental to the GarageBand app - an important point to consider if you are used to your DAW being an all-singing-and-dancing compositional platform as well as multitrack audio recorder and editor and mixer.

Auria has 2 main windows - Mix and Edit - a setup familiar to Pro Tools users, and it won't surprise you to hear that Auria borrows a few of the best ideas from several well-known DAWs – see if you can spot them! 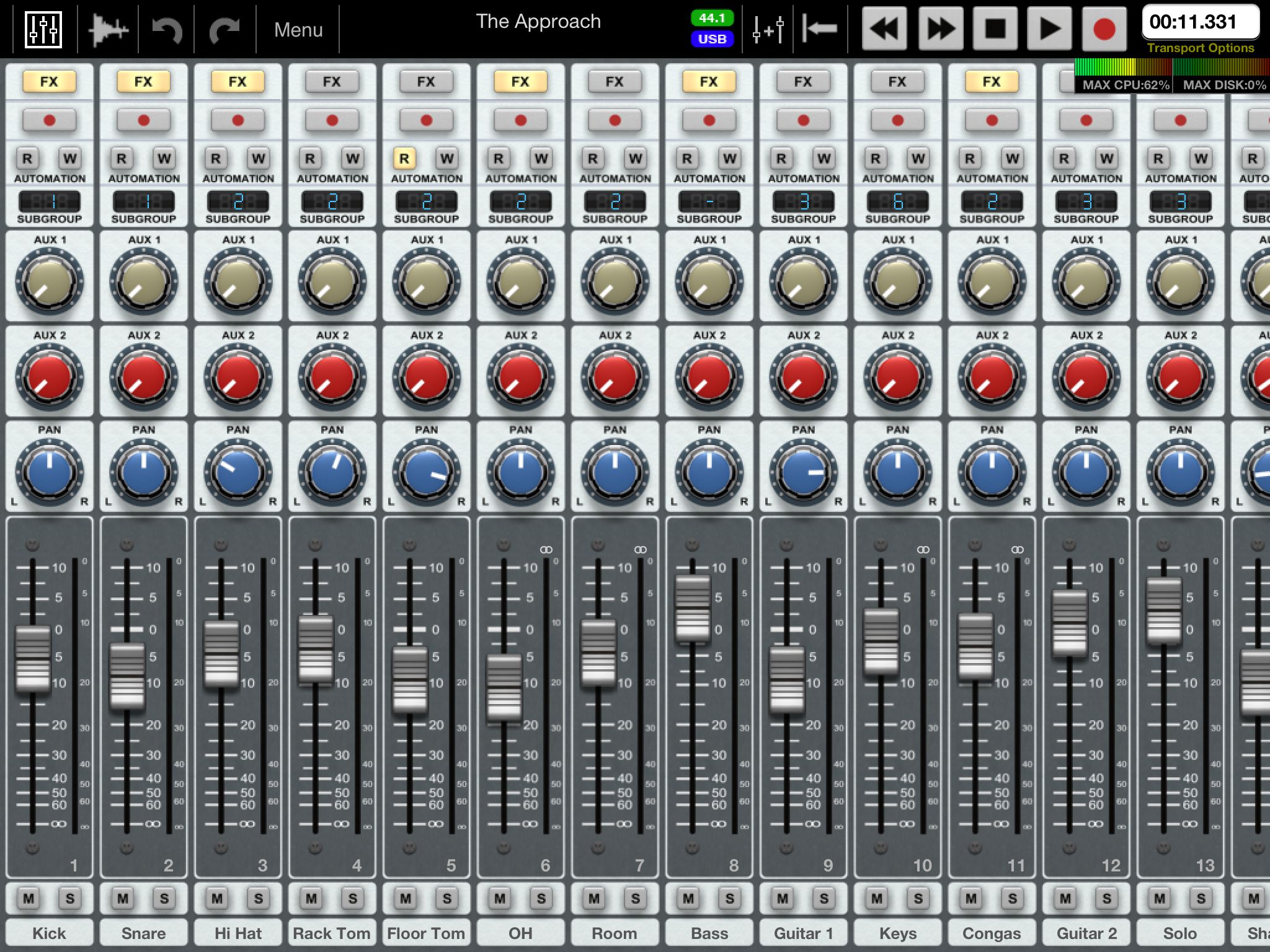 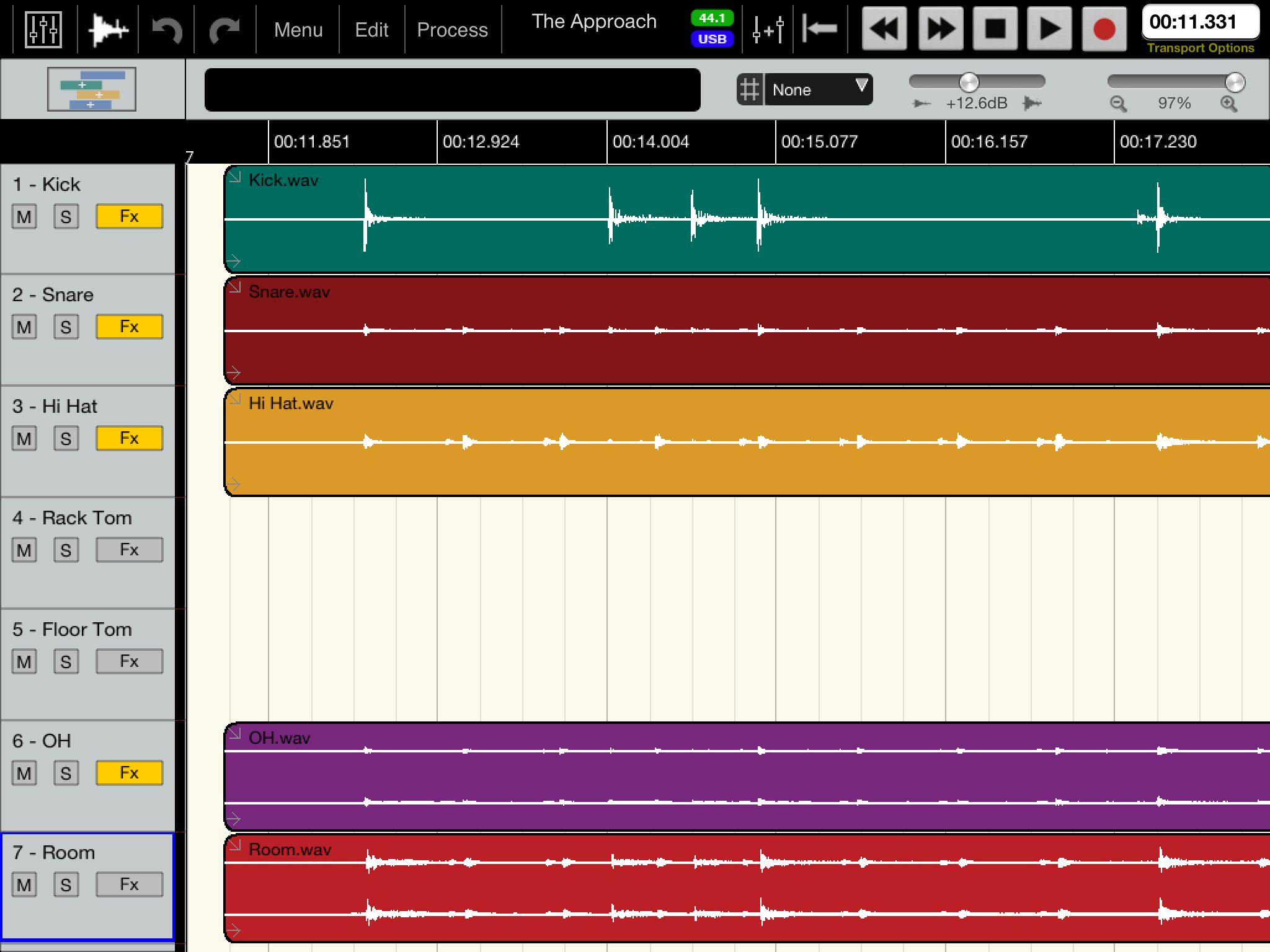 You can use Auria in portrait or landscape mode. The latter works best from a layout point of view, and the edit window is not available at all in portrait, but in this view the faders in the mix window elongate so they have literally 100 mm throw for extra accuracy. 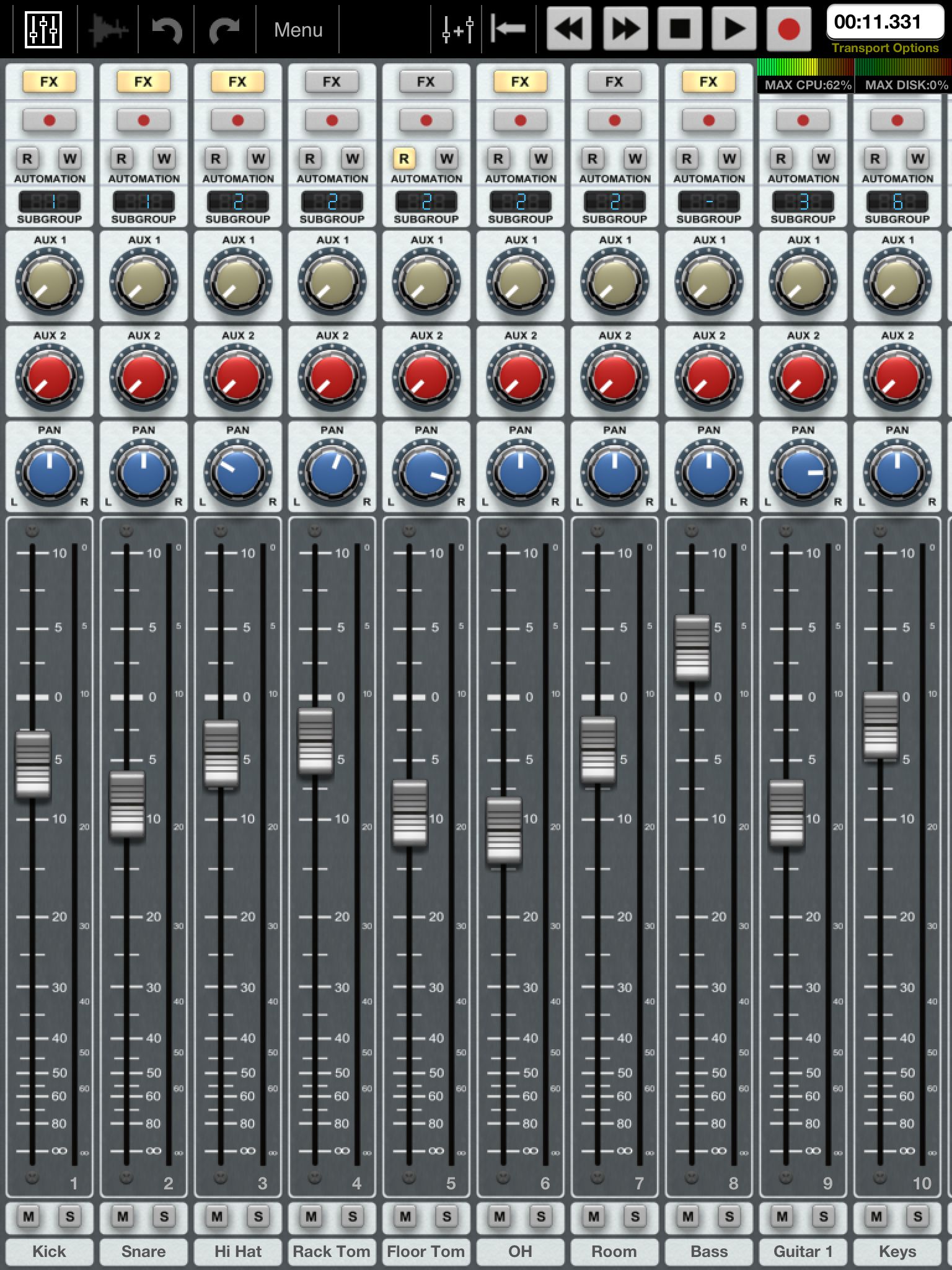 Auria is necessarily a relatively complex app. The beauty of many iOS apps is in their simplicity and intuitiveness, so Auria has to be something of a compromise in this regard – this is one of the very few apps around that has menus in the traditional sense. 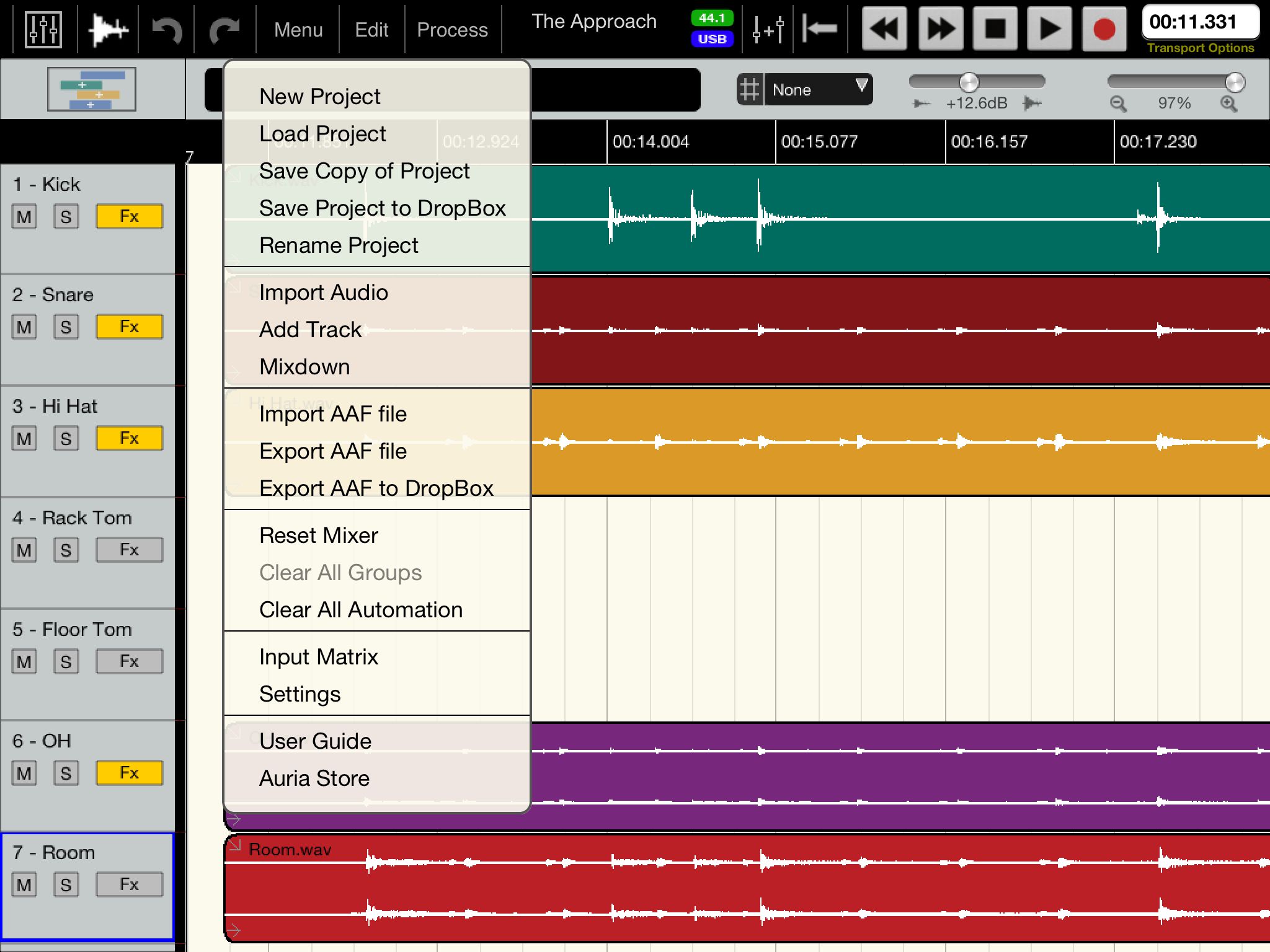 Menus? In an iOS app?

The layout and design borrow heavily from traditional DAWs, which in turn model many of their features on their hardware equivalents. So if you have used either or both before you will have no problem! That said it seems a shame that WaveMachine Labs didn't make more of the GUI opportunities in iOS to make life easier for the user in the relatively small screen real estate afforded by the iPad. Controls are fiddly and difficult to read on hardware mixing desks for a good reason – why not design them to be easier to use in software? Even the very basic MultiTrack DAW by Harmonicdog has rotary controls that present a magnified version whenever you touch them. 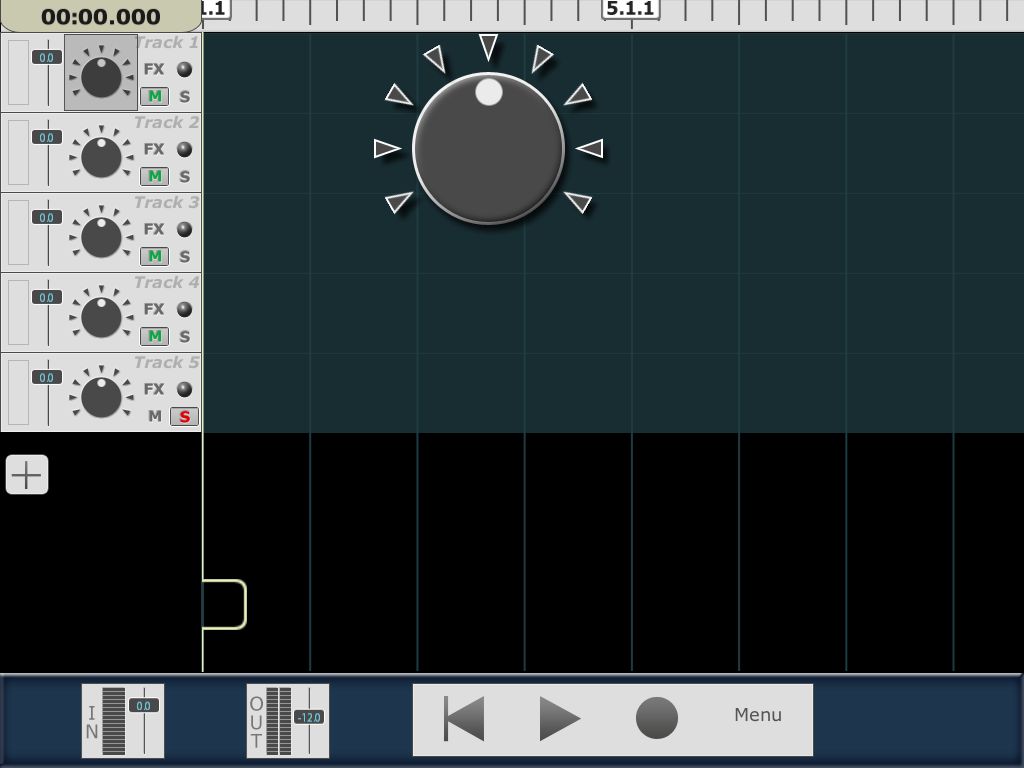 So what can you do with Auria? This table gives the maximum track counts and performance:

Auria has been optimised to run in the iOS environment, and will put up a warning dialogue of system resources on the limit. A handy multifunction performance meter gives you an idea of how well things are going. It is recommended to force quit apps that are not required in order to free up as much RAM as possible. Performance on the iPad 2 to and the iPad 3 is fairly similar, the main difference being that the RAM is twice as large on the 3, which makes a big difference when running large projects in Auria (especially when other apps are open).

This 19 track project at 44.1 kHz sample rate has a range effects inserted on 9 tracks and 5 subgroups - causing a greater than 50% load on the processor (iPad 3).

You start a new project from the main menu and specify the number of mono tracks as well as the project sample rate (from a choice of 44.1, 48 and 96 kHz) – you can always add more tracks, and stereo tracks, later. To record, tap the record enable button for the required track, then press record and play on the transport. Auto-punch recording is achieved by setting left and right locators, then activating 'Auto-punch' in the transport options menu. So far - so familiar. 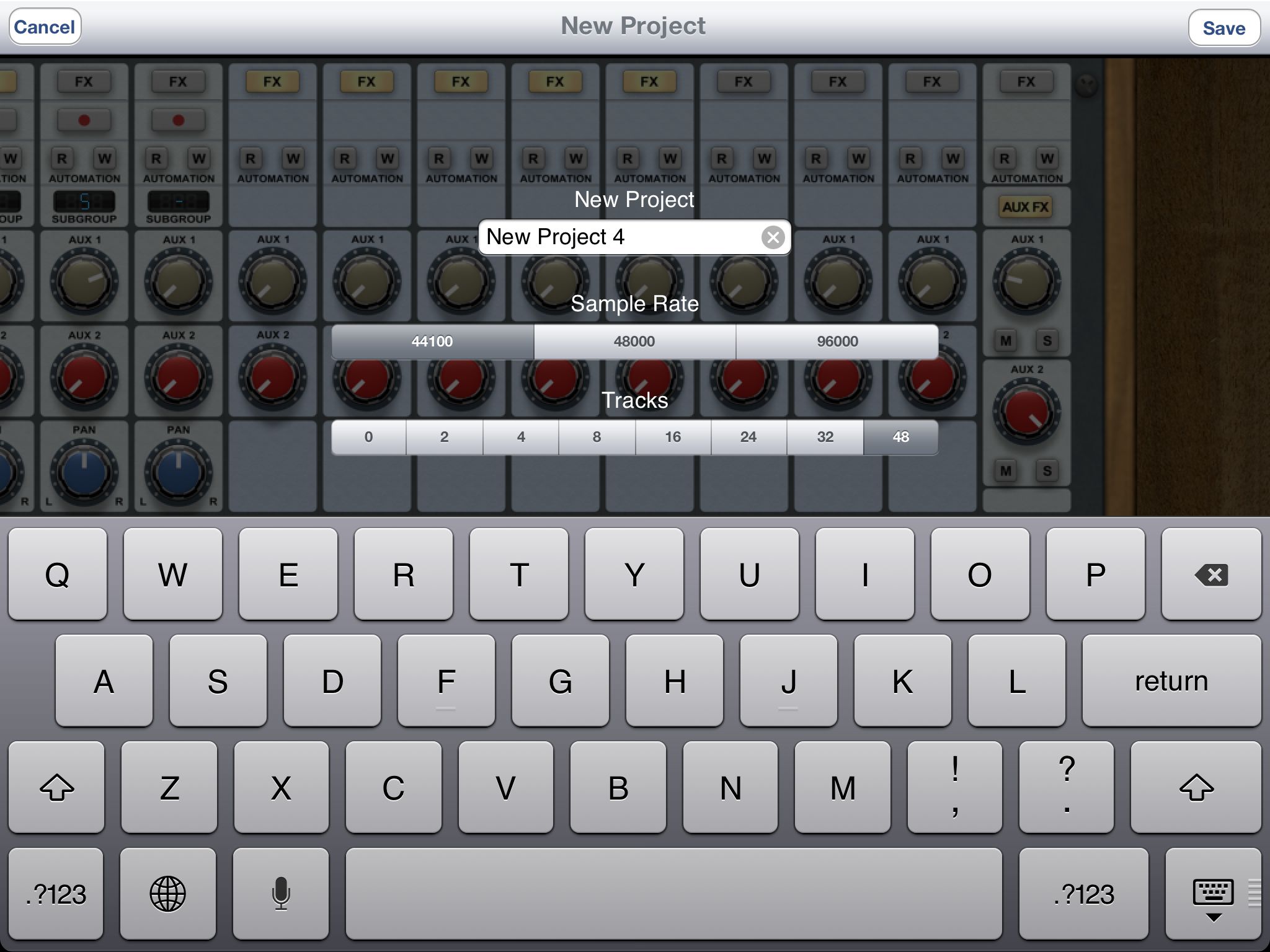 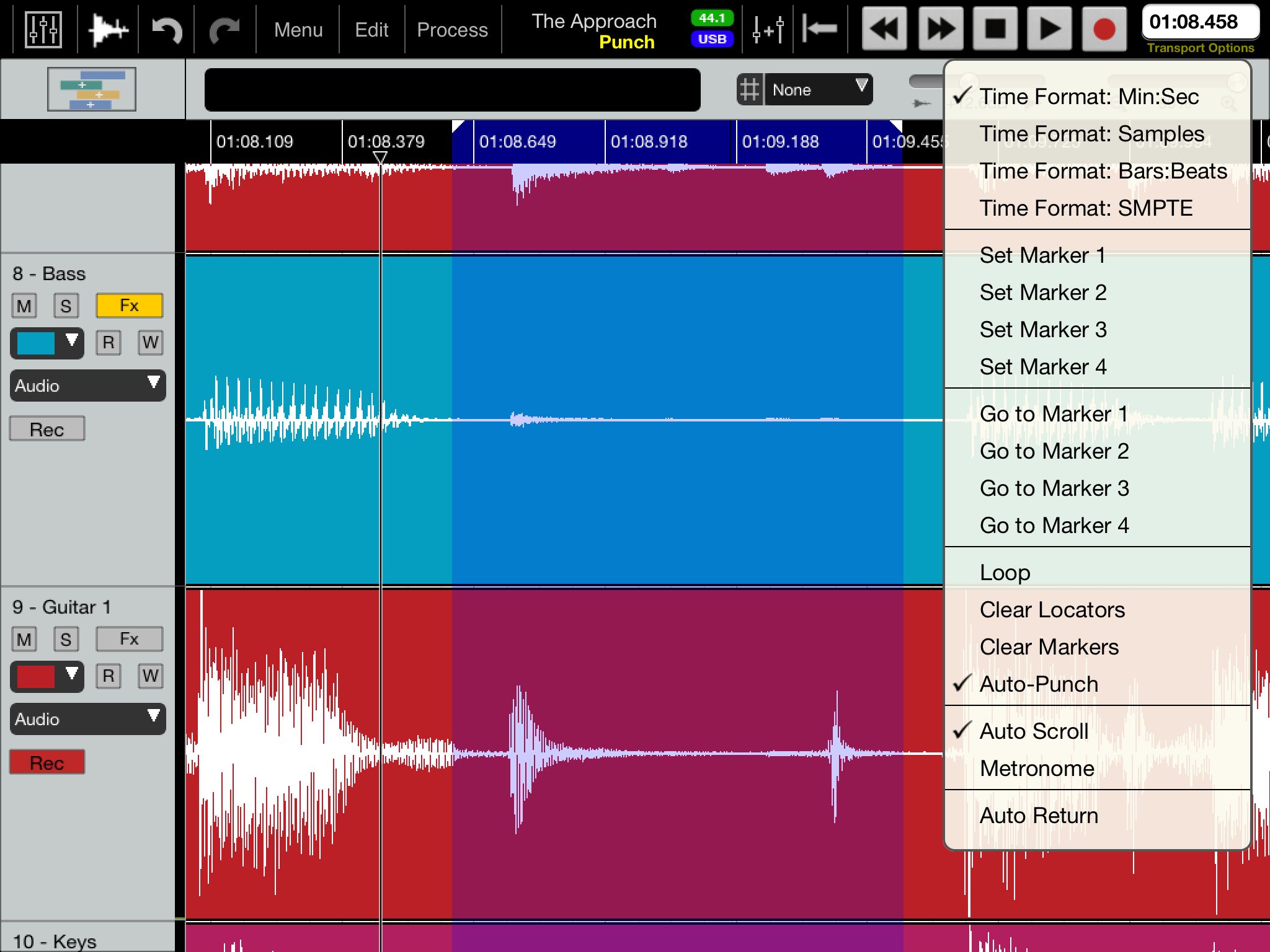 Setting up punch-in on the guitar track.

Auria will record using the built-in I/O of the iPad, or you can record via the dock connector using something like Apogee's Jam interface, but to record more than two tracks simultaneously you will need a compatible interface, connected via the camera connection kit. Compatible interfaces need to be USB Class 2.0 compliant, and a full updated list can be found at http://auriaapp.com/Support/auria-audio-interfaces. I used an RME Fireface UCX for this test – also reviewed on macProVideo.com – which provides eight simultaneous analog inputs, but WaveMachine Labs have tested up to 24 with no problems. It should be noted that iOS does not allow for more than two output channels at the time of writing. 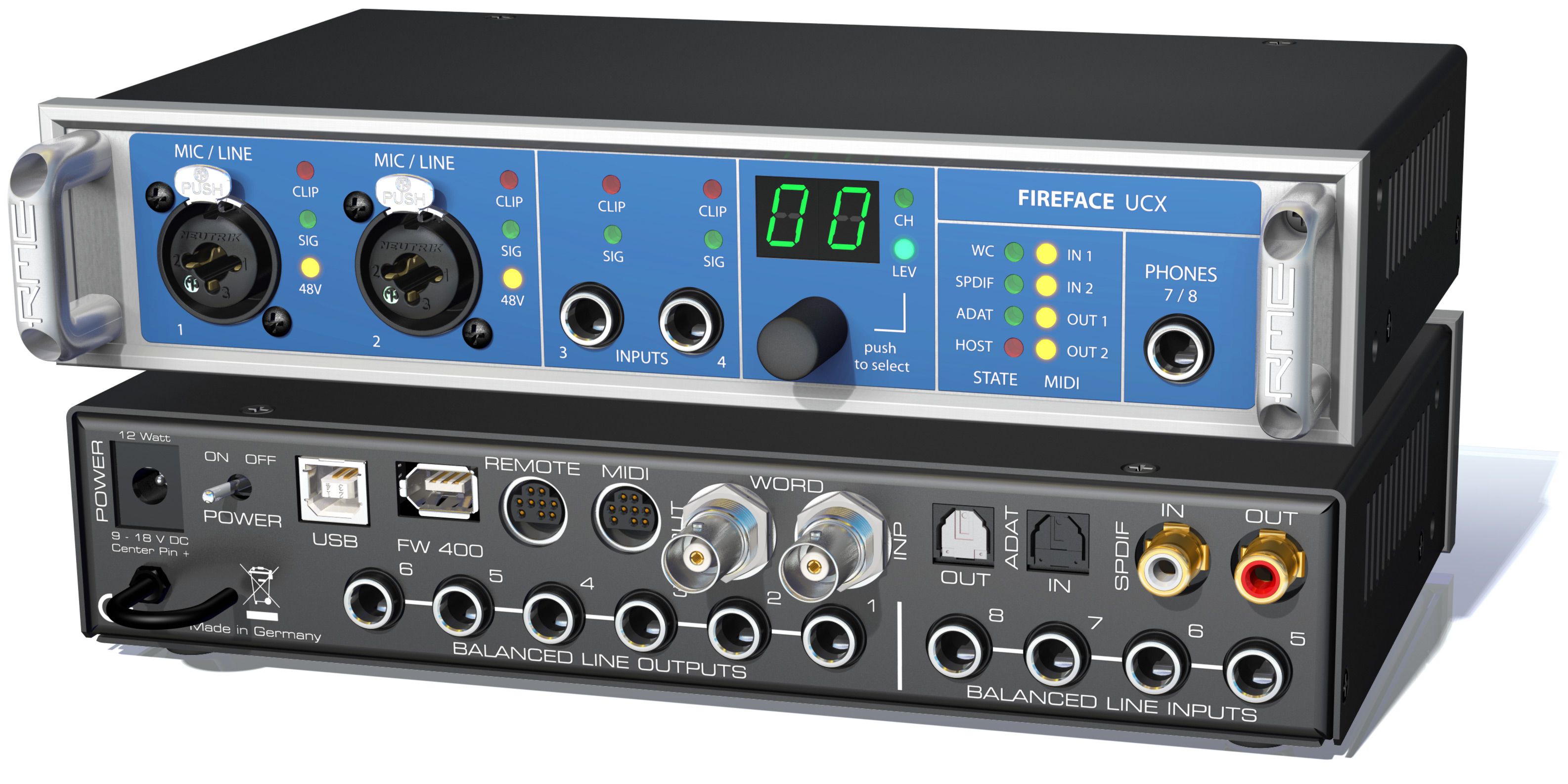 The RME Fireface UCX - one interface that allows multi-input recording to Auria.

Once you have a recording, Auria provides a wide range of editing features which will be familiar to users of other DAWs such as Logic Pro and Pro Tools. No complex list of keyboard commands to remember here - there's no keyboard! So it's all about gesture control, and the intuitive implementation in Auria will suit the seasoned iPad user. Simple trimming is achieved by tap-dragging the lower corners of regions. Having zoomed in if necessary by using the pinching gesture, you can then make a selection by double tap-holding then dragging. A range of actions can then be performed on a selection from the Edit and the Process menus (see images) – as mentioned before this feels much more like using a traditional DAW than an iOS app. 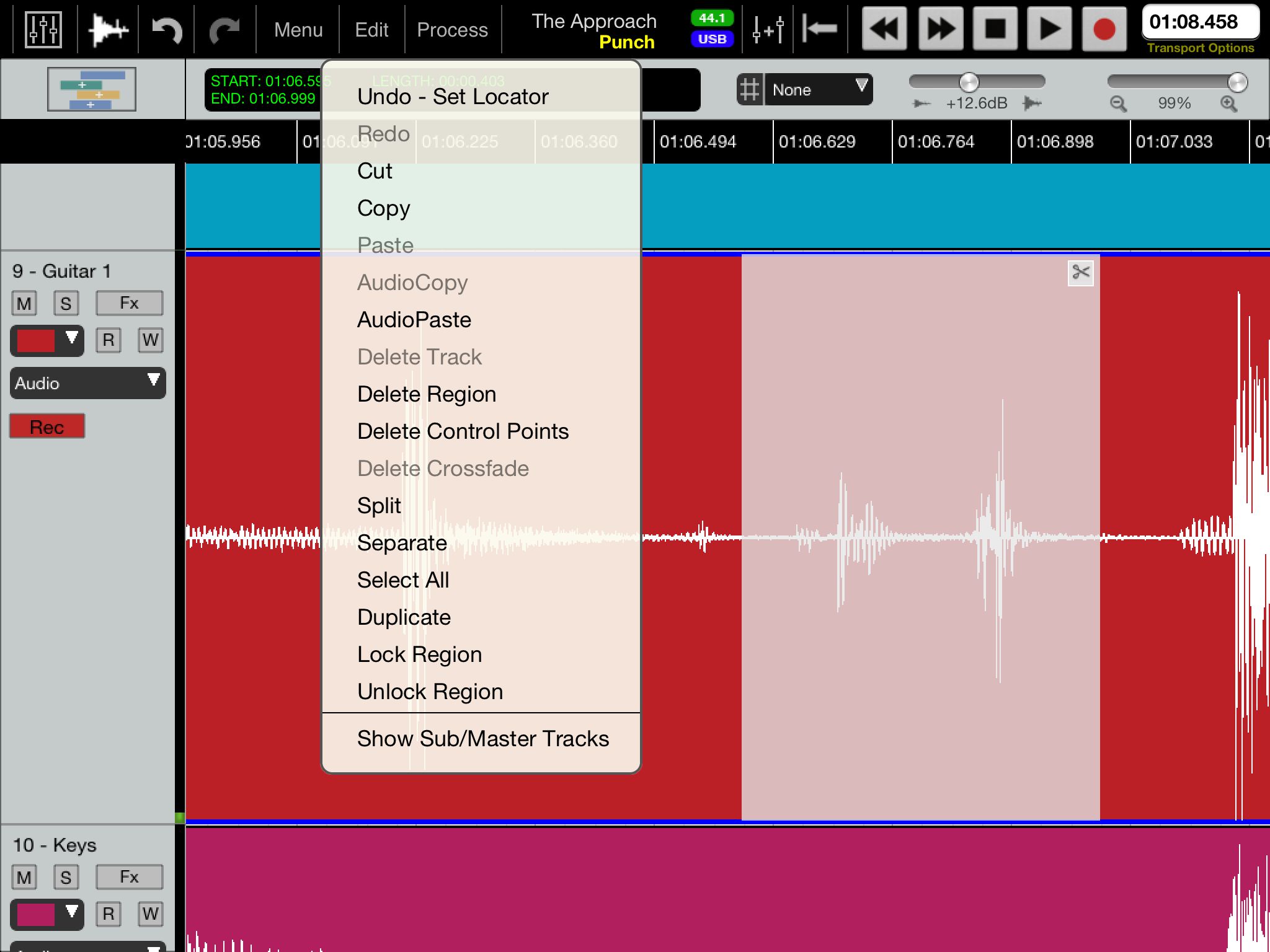 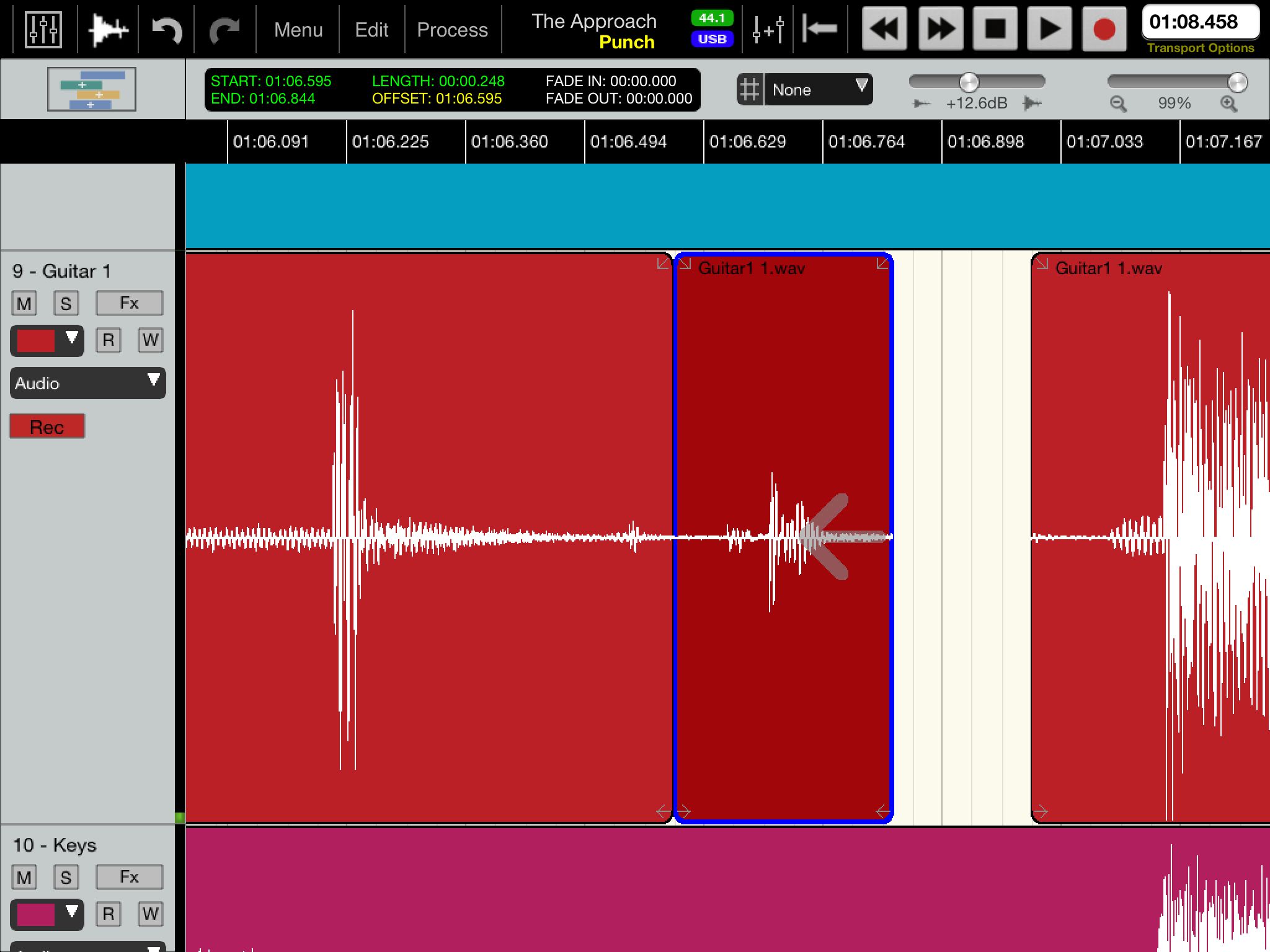 You can even add fades and crossfades (with a choice of curves) by tap-dragging the handles at the top-left and right hand corners of a region.

Unlimited Undo and Redo is available, and Auria works just like any other non-linear audio editor, in that the regions you are editing can always be resized to show more (or less) of the underlying audio that they reference. 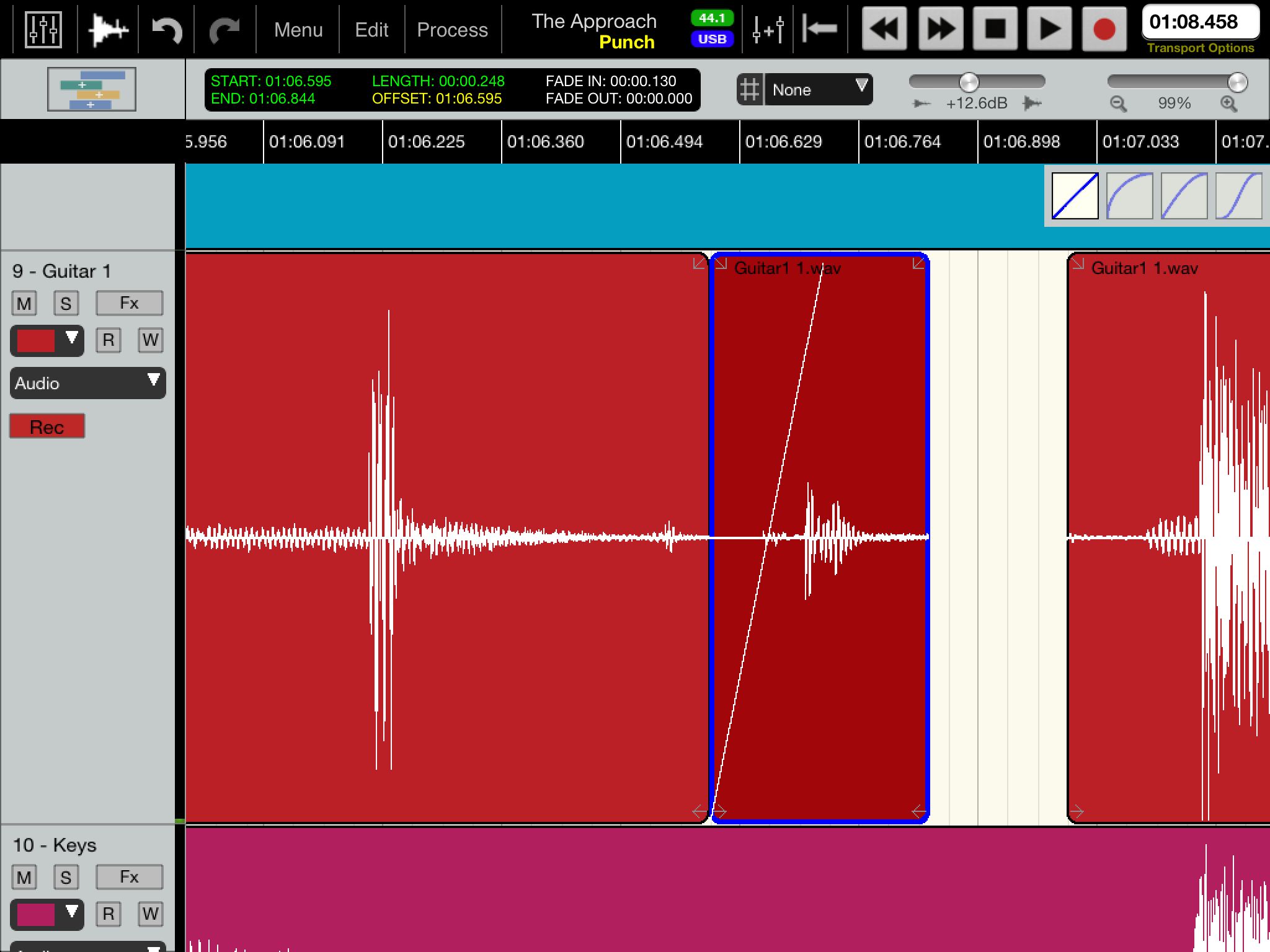 Auria's mixer consists of up to 48 audio channels, 8 subgroups and a master channel. Each audio channel sports an effects button, two auxiliary sends, a pan control and mute and solo buttons. Tap the effects button to reveal the PSP Channel Strip panel, which includes an Expander/Gate, EQ and Compressor section, as well as the ability to add four further effects as inserts. 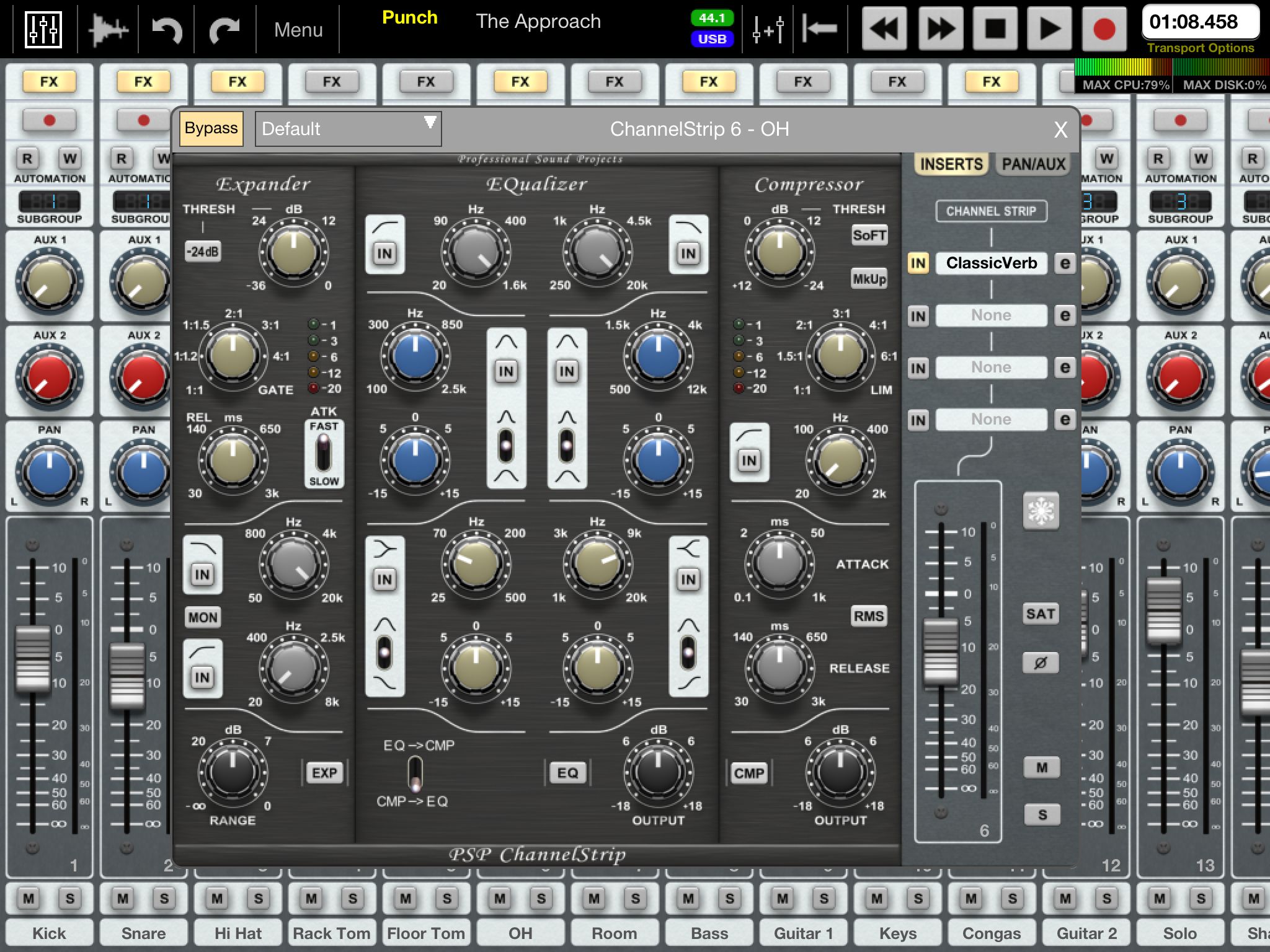 Auria comes with five plug-ins built-in (see image) but more can be purchased via the Auria plug-in store. One of Auria's standout features is that it supports plug-ins in Steinberg's VST format - however these must be recompiled by their plug-in developer and then offered as an in-app purchase through the Auria plug-in store, to meet with Apple's stringent requirements. So not quite the smorgasbord of free and paid for plug-ins that you might be used to on the Mac - but huge potential! 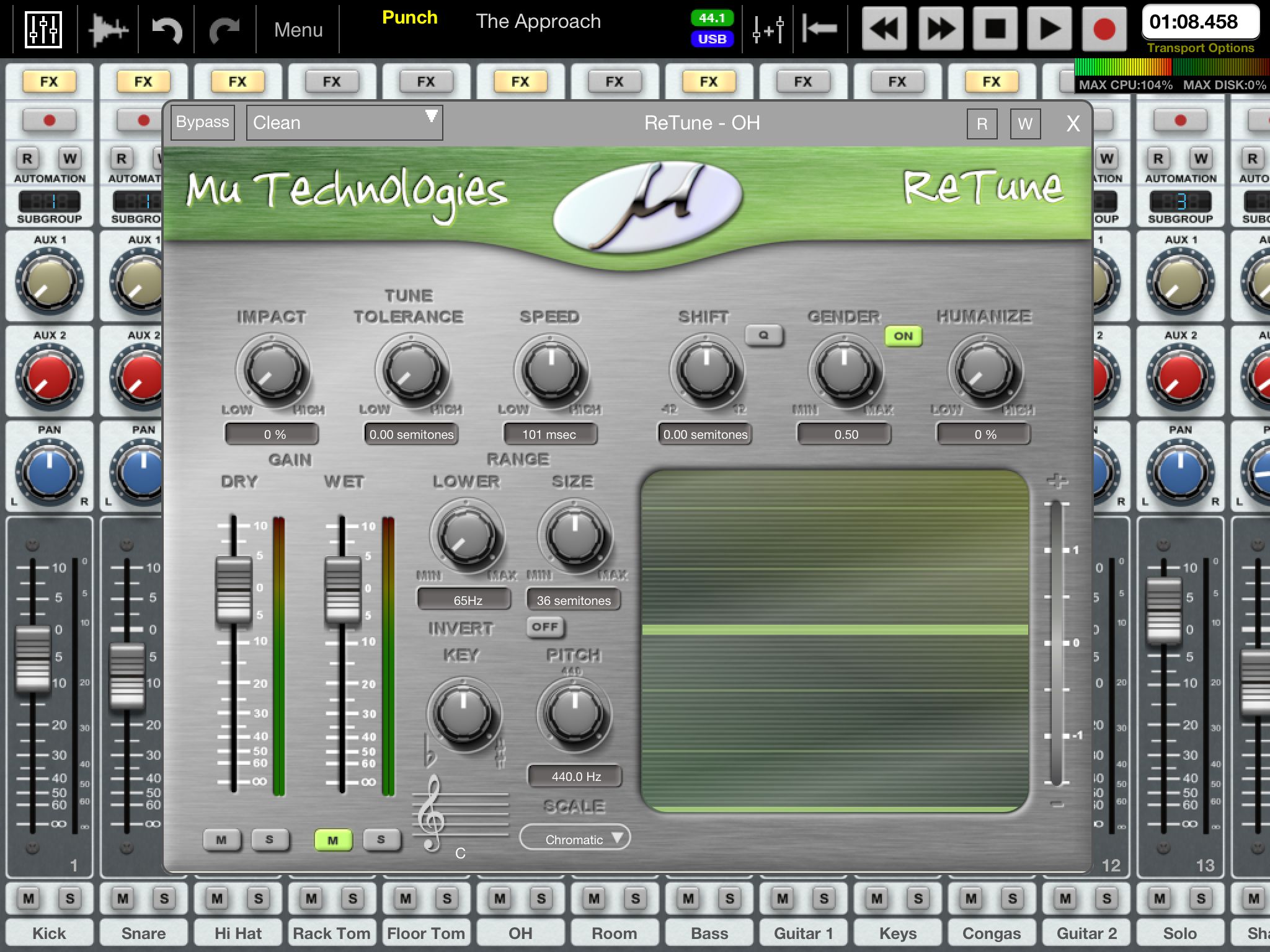 ReTune - the pitch correction plug-in that is one of the five effects that comes with Auria.

By default, effects are not recorded as with any regular DAW, but they can be printed to file if required by tap-holding the record enable switch and choosing record effects in the pop-up menu that appears.

It has to be said that the supplied effects sound pretty good, especially the PSP Channel Strip (not surprisingly as PSP plug-ins are highly regarded) – my only gripe would be again that the GUI has been designed to mimic traditional hardware and as such can be fairly fiddly to operate, especially some of the smaller switches such as the Q switch in the equalization section, which completely disappears beneath my fingertip. I guess that's one drawback to simply recompiling existing plug-ins! Bigger graphics, an ability to zoom in, or see-through skin is definitely required!

Every control can however be automated, both in real time using the controls, or by drawing automation curves in the Edit window, where the automation pop-up menu reveals a list of automation playlists where every parameter can be accessed, viewed and edited. 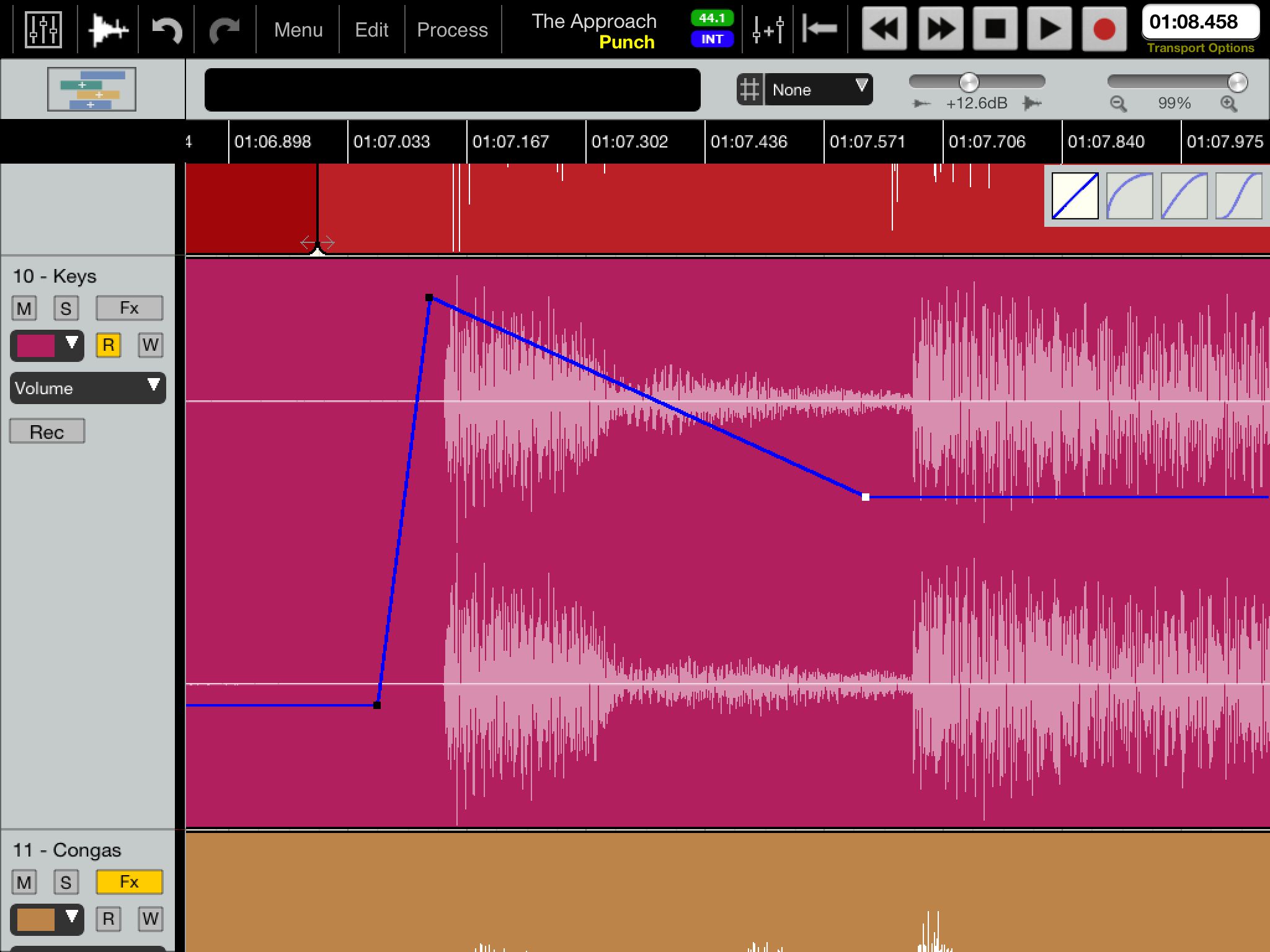 As well as a range of plug-ins you can also purchase impulse responses to expand Auria's convolution reverb, and for $4.99/£2.99 you can buy the Video Import Add-On. This allows you to import video files (via iTunes file sharing or DropBox) to Auria projects. These play in sync with the project in the video preview window (which also has a full-screen mode). SMPTE start and end times, frame rate and video offset can all be selected, and the final result can be exported to a video file which contains the new soundtrack. Real time scrubbing is also possible at sub frame accuracy, but this did become slightly sluggish when the CPU was under high load (as it would on a Mac!) 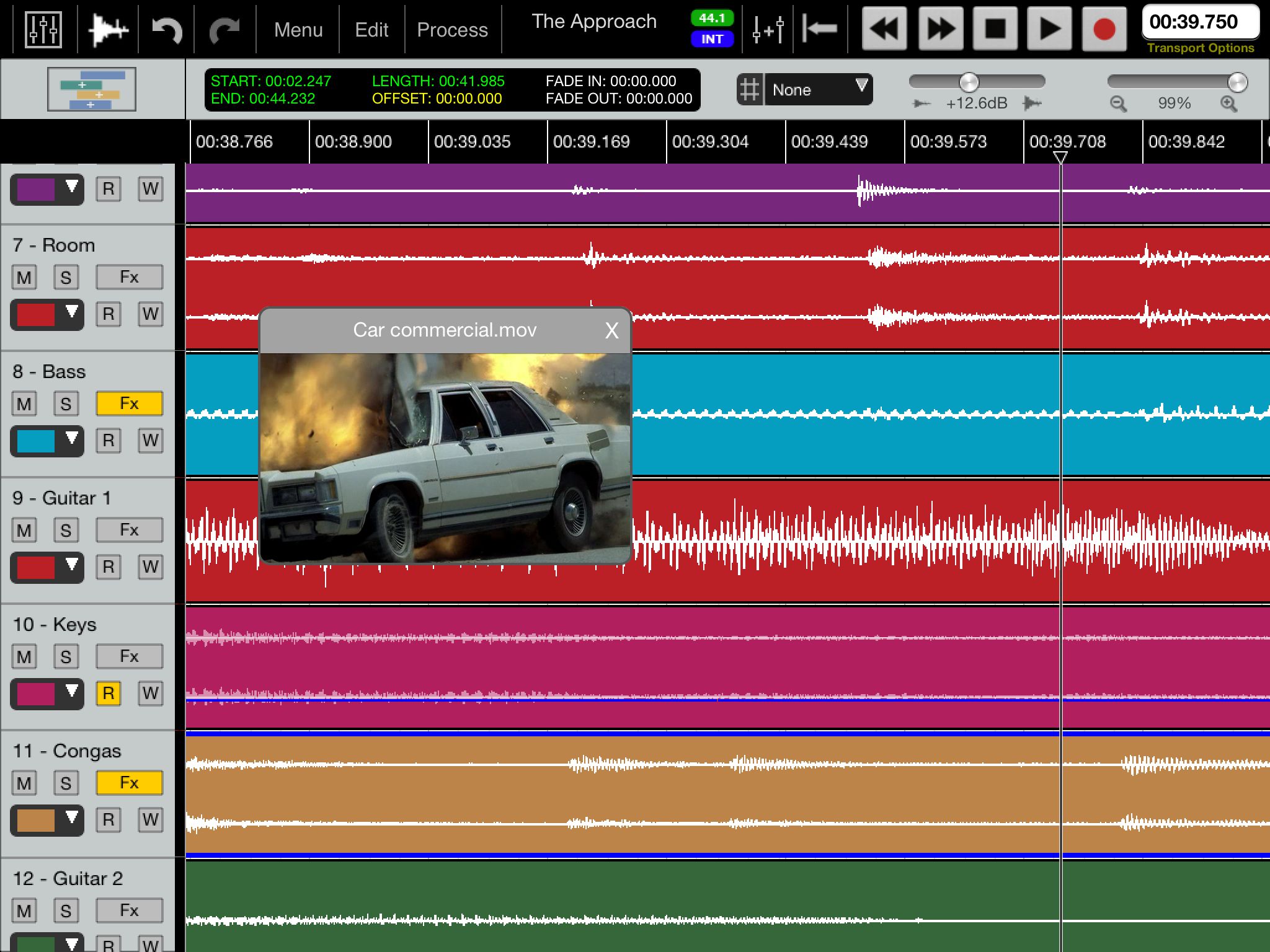 Video in sync in Auria.

As usual with iOS apps, project files are saved within the app. There is no save button - all updates are automatically saved. Exporting and importing is achieved by means of AAF (advanced authoring format file) – a cross-platform file format recognised by all the major DAWs. iTunes file sharing is implemented of course, but Auria also has DropBox integrated right into the program so you don't even need to have it installed on your iPad – you just need an account! From the main menu you can export AAF to DropBox (which also exports the required audio files), or import directly from your DropBox into Auria. This is a well executed solution – some may complain that DropBox only offers 2 GB of storage for a basic free account, but this is still enough for an 8 minute 48 track project at 44.1 kHz 16-bit! And you can always create a new DropBox account if you need more space...

As mentioned above, Auria is a recording and mixing platform – if you need to add a keyboard part then it's good to know that Sonoma WireWorks AudioCopy/AudioPaste protocol is supported, and for those apps that don't support this protocol you can always import audio files via DropBox or iTunes file sharing. WaveMachine Labs are working on virtual instruments for Auria as we speak (and we'll keep you posted here at macProVideo!) but in the meantime, another option is to sync Auria with compatible apps on a second iPad via Korg's Bluetooth-based WIST protocol. WaveMachine Labs have also implemented their own version of Bluetooth based synchronization called AuriaLink, which allows you to sync two iPads running Auria, giving a total of 96 tracks, and intelligent linking of transport, scrolling, zooming and resizing tracks. 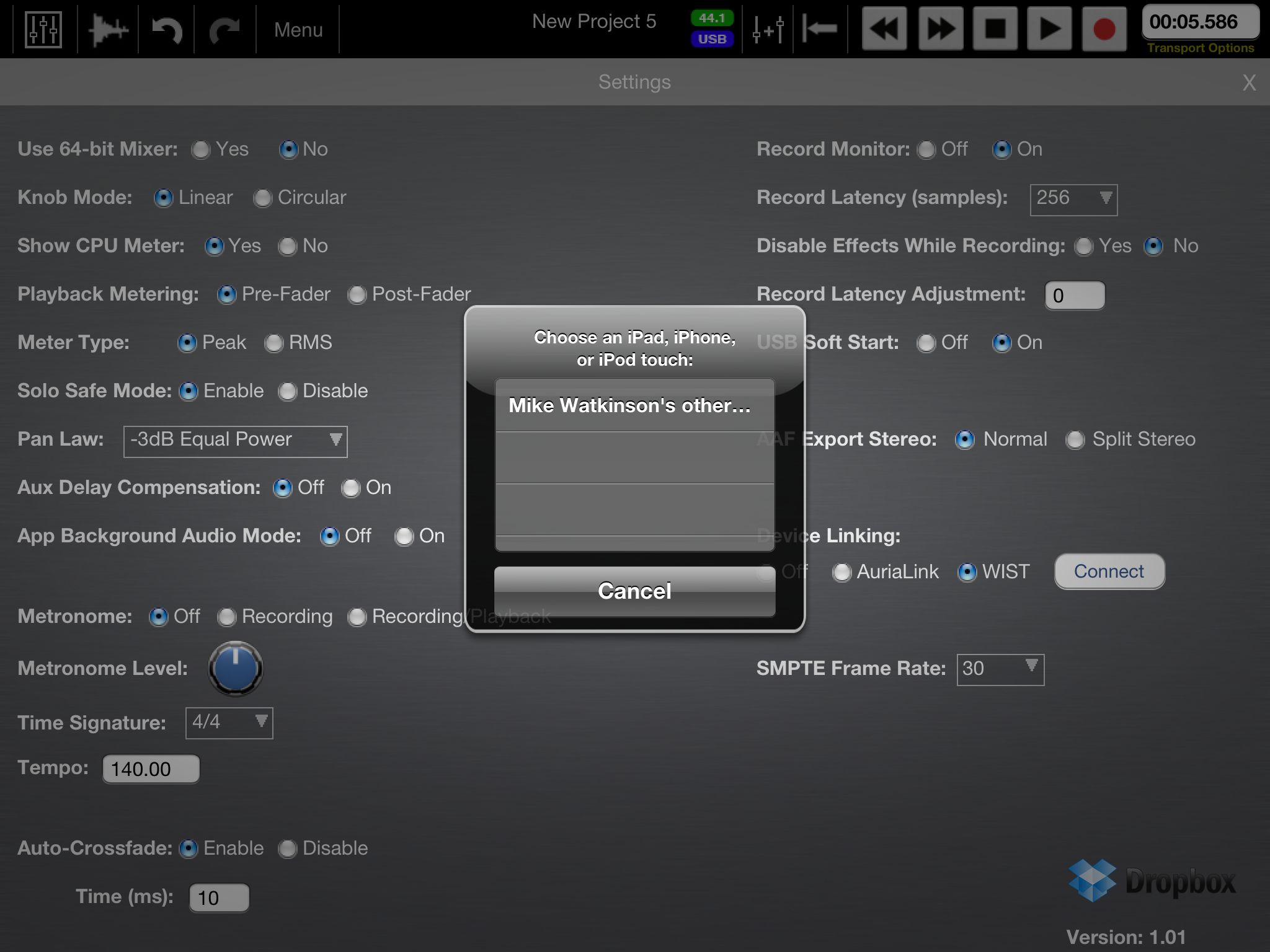 Syncing to a second iPad via WIST.

Once complete, projects can be mixed down to one of three formats (WAV, AIF, MP3) and exported straight to DropBox or SoundCloud.

The first thing to say here is that there is no way I could list all the features that Auria offers within the scope of this review. For recording and mixing on the iPad, it has all the bases covered - just about everything you can do in your regular DAW can be done in Auria. It is limited to two auxiliary buses, and the controls are sometimes a bit fiddly; currently the plug-in selection is limited - but that looks set to change as long as VST plug-in developers join the party. Auria is a very well-thought-out app and the development is top quality. I didn't experience a single bug or glitch while testing it. Yes it is expensive for an iOS app, but Auria is a very impressive implementation of many of the features we have come to expect in high end DAW software on the Mac, and on the iPad there is currently nothing to match it.

Learn more about Auria for iPad.