Language
German company, Audiowerkstatt, have come out with a rather nifty hardware MIDI step sequencer with some very cool features. G.W. Childs puts this the mini-midi-step to the test.

Leave it to another tiny German developer to convince me that I need another piece of hardware! Recently, I got to check out the mini-mid-step-seq from AudioWerkstatt.de—A powerful, and tiny hardware sequencer. Is it worth your time and interest? Well, it might just be!

The Power of Perception

Arriving in a nicely packed, unassuming box, a green, little sequencer arrived with some explanation. But, not much. Though, when you begin to mess with the mini-midi-step, you begin to realize, not a lot of explanation is really needed.

Built only of a few PCBs, some buttons, a few LEDs and some knobs, you might be scratching your head when you compare its look with the price tag. And, when you finally get your mind around the fact that you have to supply clock from somewhere other than the mini-midi-step, like a DAW or another MIDI device that generates clock, and that the MMS (mini-midi-step) does not come with a power supply... well you might find yourself scratching your head even more, wondering whether this is all worth it. However, once it’s running, you’ll find that a lot of love and polish has been put into this little box. And, it definitely offers a perspective that is both unique and efficient. 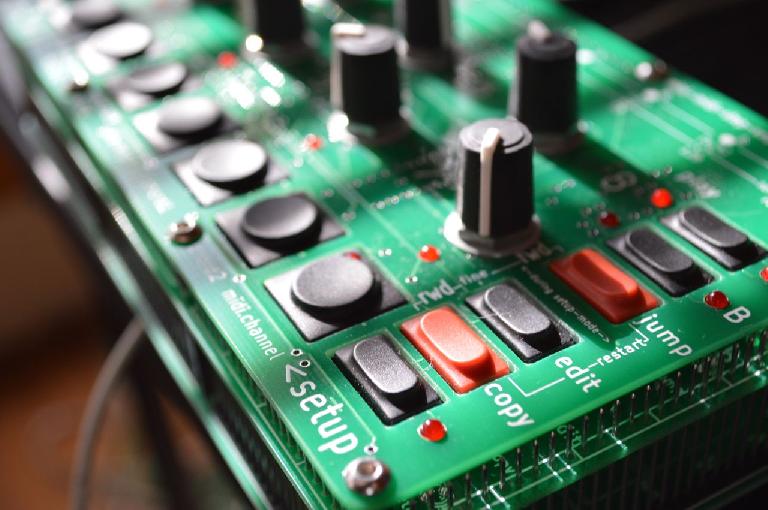 After sending MIDI from Ableton via my MOTU Traveler, to the mini-midi-step (MMS), and sending a little MIDI Out from the MMS, over to my handy little volca Bass, quite a jam session began.

I am quite fond of the sequencer on my volca Bass, but every now and then, building melodies with new interfaces usually, and in my experience, do yield fascinating new results. The mini-midi-step actually facilitated such an experience, much to my surprise.

I am not usually a fan of knob-based step sequencers, where you manage the key of each step with the pots, and enable each step with the buttons, etc. That being said, I have only really spent time with these devices when they were software generated (Reason’s Thor, and so on). So, with an open mind, I just decided to do what I was told—Have fun with it. And, I really did! 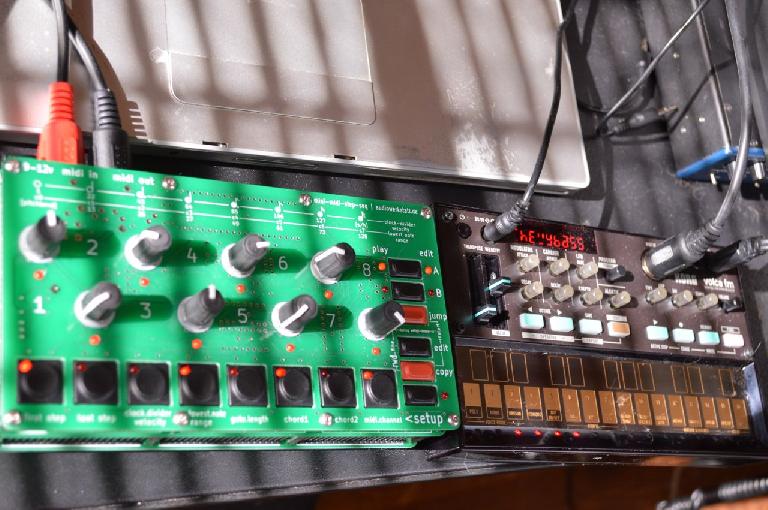 Once you get used to the LED-based programming, it’s pretty easy to figure out how to set up your MIDI channel. After using the Setup menu to establish the proper channel (1), and pressing play in Ableton, volca FM sprang to life with a new heart pumping.

With one synth, I quickly found my head bobbing to an unheard kick. I really did want to have it just be me and the sequencer and synth.

Now, we all know that when we have an electro jam session, where it’s just man and machine, nothing hurts worse than sensing structural fragility within the item of your musical escape. The mini-midi-step, despite fragile looks with its pictures, is actually much more solid than you might imagine. The knobs are on there, and they seem like they could hold up in a sweaty, warehouse, hardware jam. So, it’s tweaker friendly. The buttons also feel solid and dreamy to the touch. The light powder-coating is a nice touch, and really does add a ‘touch me’ feeling to the device. And, while I wouldn’t want to go mad, slamming on these button, they do feel like they can withstand more than what they let on, if you know what I mean.

The simple, linear sequencer pulls you in, there’s just something about it. I found myself turning dials like a fool. And, being able to reverse my sequence on the fly, from forward to backward and vice-versa was a trick that I really wished I had internally on my volca. I’m not going to say that there wasn’t a little bit of a learning curve. If I had to play a show with one today, I’d have to quickly decline. I’m not there yet! But I don’t think it will take me long. 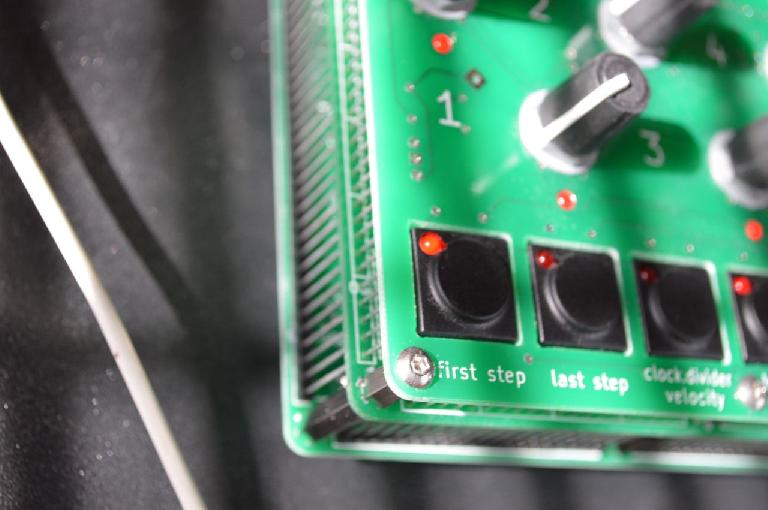 While there is only one pattern, there are two 8-step patterns that can be either used alternatively, or chained together. Being able to set the note range is extremely helpful, especially with the knob-based programming, as it makes it easy to narrow in on your preferred octave.

Being able to modify the clock divider, on the fly, is amazing.

While the mini-midi-step holds a lot of possibility with its rugged frame and clever workflow, it isn’t cheap. But you aren’t just picking up an assembly line, thrown together, chintzy piece of gear. You’re getting a handmade piece of German precision with great packing, if somewhat lacking in the manual department. I will say that once you’ve got it down, it really does add something to the workflow of electronic dance music that is both helpful and unexpected in a device so small, and so simple. I would even consider sending MIDI back into my DAW to have a new experience with soft synths, in addition to my hard synths.

Pros: A simple, but powerful, hardware step sequencer with a slew of cool editing features that are perfect for live jam sessions.

Cons: No power adapter, no internal clock, you need a device that can generate MIDI clock for it to work. No CV.