Language
Audified have updated their popular U73b compressor plug-in to add several new features, including external side-chaining. Will the enhancements entice current and new users to jump onboard?

Until Audified released the 1.0 version of the U73b, many of us had no idea what the classic—or should I say, notorious—hardware comp/limiter was all about. Not many of them made their way outside of Europe, so most of us used other classic hardware compressors like the Urei 1176, Teletronix LA-2A, and Fairchild 670. Little did we know that the U73b had become a legend among many mastering engineers… well, West German engineers, anyway. From its early progenitors built for the historic broadcast of the 1936 Olympic Games, this tube design was refined many times until the '60s, then production ceased in 1980. But many original U73b units are still working in mastering and broadcast houses today. Though most owners hold onto them like the family jewels, you can occasionally find one online. I just checked eBay and found a cherry pair for €10,419. (That’s roughly $11,342 plus over $100 for shipping to folks like me in the USA.) The other option is Audified’s U73b plug-in for $149.00, but can it really provide that original vibe?

The U73b 2.0 works on Mac and Windows, and comes in AAX, AU, VST2, and VST3 formats. At just under 100 MB, it’s really compact, and kudos to the developers for writing such efficient code. It uses the iLok for copy protection, which allows it to be installed on one computer if you don’t have an iLok dongle.

The first thing I noticed was the all-new interface with new controls. Gone is the aged front panel, replaced with design that looks out-of-the-box fresh. The interface is wider to accommodate the new controls, and they even put an extra latch on the front. (The latches match the look of the hardware U73b, but Audified kept it in their design… obviously to prevent the unit from sliding off your computer screen.)  It now has an English setting for the control panel, though I like to use it in the native Deutsch setting. However, for the rest of this review, I’ll use English when describing the controls.

The top of the interface can be customized (one of my favorite features, more on that later) and there’s an Auto setting to match the Output gain to the Input level. Other nice features include a default Calibration setting (so that subsequent instances of the plug-in will load with the same Calibration level), and a new Oversampling setting. (Note: Turning the Oversampling on will draw significantly more processing power, so it’s best to leave it off during mixing, then on when rendering.) But perhaps the biggest new feature is external side-chaining, which allows the compressor to be triggered by a different signal source. 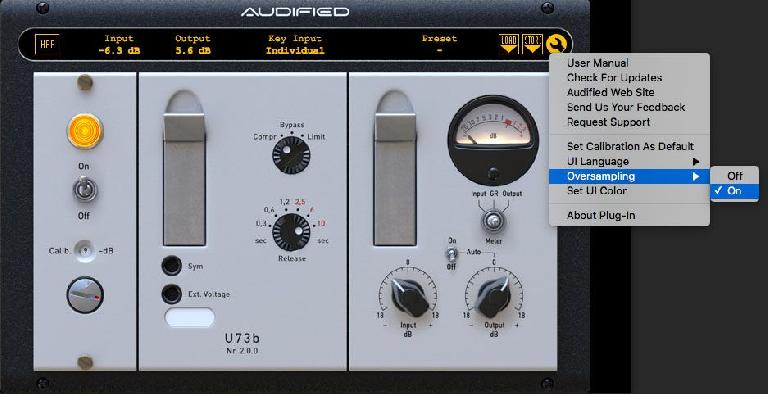 Yeah, Yeah, How Does It Sound?

While the U73b was originally designed as a bus compressor, that shouldn’t stop anyone from using it on individual tracks. To that end, I first applied it on a male lead vocal track and the sound was instantly delicious. I love it when you get stellar results just by launching a new plug-in, and the U73b is chock full of instant gratification. The U73b really shines as an ‘invisible’ compressor: You know it’s working, but you really have to listen for the effect. When you want to hear it, you can push it harder to get it to breathe nicely. It did wonderful things on both individual drum tracks, as well as the drum bus. The dynamics of bass, vocals, and any acoustic instrument can be tamed quickly with fantastic results. Putting it where it was originally designed—the master bus—was instantly pleasing. There are several presets, and a few are named with “BT” and “BC” prefixes to denote the artist presets made by Bjorn Thorsrud and Boris Carloff, respectively. (Not Boris Karloff the actor, rather Boris Carloff the Czech Grammy-winner.) You can also save your own presets, but adjusting the controls is so quick and easy that I found myself just crafting the desired sound from the default settings.

If you’ve used an 1176 (including many of the virtual emulations thereof), you’ll instantly feel at home on the U73b. While the hardware unit didn’t have Input and Output controls, Audified’s version has both (+/- 18 dB) along with an Auto gain setting, all of which are found in the Level Control model at the right of the interface. (See Figure 1.) Increasing the Input will result in more gain reduction, while the Output will alter the overall output level. The Auto setting latches the Input and Output knobs together, but the Output control remains independently adjustable. That gives you the ability to set an approximate input/output gain using the Input knob, then adjusting the desired output level with the Output knob. The resulting settings will remain relative to each independent setting when the Input knob is subsequently adjusted. Each setting can also be adjusted numerically at the top of the interface, and the VU Meter can monitor the Input, GR (Gain Reduction), and Output levels depending on the position of the switch.

The Compressor module at the center looks most like the hardware U73b, with the exception of the Instrument level setting. (The plug-in obviously doesn’t need that control, though the external inputs are depicted cosmetically on the panel.) There’s a knob with settings for Compressor, Bypass, or Limiter modes, along with a Release (time) control. The first three settings are static at 0.3, 0.6, and 1.2 seconds, whereas the 2.5, 6, and 10 second settings are program-dependent, therefore the release is adjusted dynamically based on the source signal.

The Power and Calibration module contains the On/Off switch, and the virtual light in the Meter will also reflect the power status. (A nice touch.) There’s also a small knob for setting the Calibration value with default value of -9 dB. That operational voltage setting comes from the actual hardware unit Audified used to model the plug-in, and it’s referenced to the dBu scale. Modern DAW programs work in the digital (dBFS, or Decibels Full Scale), so you’ll want to set the Calibration to the headroom value of your DAW. For Cubase, the factory setting worked well, but you may want to experiment with the levels in your DAW. When you’ve determined the setting you want to use, go to the Services menu and click Select Calibration as Default. That will allow future instances of the U73b to load with your Calibration value. (Note: Older sessions and projects will retain the Calibration values during the last Save operation, so you may want to check the Calibration in older mixes.)

At the top of the interface you’ll find the HPF button that controls the gentle 6 dB-per-octave high-pass filter at 100 Hz. (Solid when enabled, clear when disabled.) This emulates the ‘always on’ HFP of the hardware U73b, but you can disengage it for tracks and busses containing low frequencies. (Though you couldn’t disengage the HPF on the hardware unit, I kind of wish the button was featured on the control panel rather than the top of the interface, but that’s a very minor issue.) The aforementioned Input/Output values are next, followed by the Key Input setting for the compressor trigger channel select (Individual, Left, Right, Left+Right [summed], the latter two only available on stereo tracks.) You’ll also find the External Sidechain (sic) for allowing the Key Input to be triggered by another audio source like a drum track. Last, you’ll find the Preset buttons for loading and saving, and the Services menu. All the settings at the top of the interface are color-coded, and might actually change depending on the color you’ve assigned to the DAW track or bus. This feature worked automatically in Cubase, and it really helped to indicate which instance of a particular U73b was which. Since I’ve found myself loading more and more instances, this is a wonderful feature. Customizing your own color can be done in the Services menu.

Man, this plug-in sounds great, but I did have a few quibbles. I mentioned the placement of the HPF switch, but I also wish there was a way to enable/disable the Oversampling globally like you can with the Calibration setting. The lack of a global setting requires that you go to each instance of the U73b and set the parameter individually prior to mixdown. (Presuming you’ll want to enable Oversampling; it does sound slightly better enabled.) Lastly, the external inputs on the front panel are only cosmetic, but they might confuse the new user.

I’m glad my other compression plug-ins aren’t capable of experiencing jealousy, because I think they all just took a backseat to the U73b. It’s one of those plug-ins that does amazing things to practically any track or mix: just turn it on, listen, and season to taste, if necessary. Granted, I don’t have a hardware U73b with which to compare this virtual model. But Audified meticulously dissected a real one to reveal the inner magic and personality of the original Telefunken/TAG product, then added their own welcome refinements. (Even if you don’t read the PDF manual, make sure to sneak a peak because it looks like an old typewritten manual with yellowed pages from the '60s!) If you’re a version 1.0 user, you’ll definitely want to upgrade. If you’re looking to add the U73b vibe to your toolkit, you won’t go wrong. You can download a trial version at www.audified.com to experience it for yourself.