Audient is a British company that makes among other things a range of high-end recording consoles and mic preamps. More recently it has been diversifying into smaller units better suited to those producing music at home or in smaller studios: I was particularly impressed with the iD22 audio interface. Fresh from its stable is the iD14, designed for those on the move, in smaller spaces or who simply want easy audio in and out without the additional complexity of a larger unit. Audient has form for making really high-quality gear, so I was interested to see how its most budget-conscious model to date fared in day-to-day use.

It's a surprisingly compact unit but feels really solid, finished in metal and with a very good build quality. Although small, it's robust and isn't going to start sliding around on your desk. It powers over USB2 but also comes with a dedicated power supply: Audient states that mains powering is necessary to use phantom power since it guarantees the full voltage is delivered. Powering over USB works fine for non-phantom powered tasks.

"Audient has form for making really high-quality gear, so I was interested to see how its most budget-conscious model to date fared in day-to-day use."

Around the back are two combo XLR / line inputs which feature the same Class-A Audient Console mic preamps found in the company's larger units and inside, high performance Burr Brown AD/DA converters. The idea is that even when using this compact interface you still get access to the same sound quality of the more expensive models. There are stereo jack outputs for connection to a monitoring system and an optical input which accepts ADAT input, say for example for connecting a multichannel mic pre unit for recording a whole drum kit.  On the side, a Kensington lock port means you can secure it which is handy for any kind of public area.

The front edge features a discrete JFET instrument input for connecting a guitar, bass or other instrument and is designed to replicate the input stage of a classic valve amp, plus there's an independent class AB headphone output. The main panel has a gain control for each of the two channels and phantom power switches for each, with a high-quality action and pleasingly retro feel. A simple level meter in the center is color coded to show you current levels.

To the right of the unit is a large scroll wheel and this has multiple functions based on the three buttons underneath it. It is used to set the master output or headphone levels depending on which button is selected, or provide DAW control if the central iD button is activated.

"It's actually quite handy to be able to mouse over effect or instrument controls and alter them using the gently stepped dial on the hardware."

This is an interesting addition: in some DAWs, you can hover the mouse over certain controls like synth filters or effect dials, and use the hardware scroll wheel to move them around. This doesn't require any special mucking about, but it does require a scroll wheel-enabled DAW. So it works throughout most of Logic Pro, but not in Ableton Live. In Reason it scrolls the rack but not any actual modules. It's dependent on your DAW so if this is a deal breaker it's worth checking out though it's more of a nice bonus if you happen to have a compatible DAW than a core reason to go for any particular interface. In Logic it's actually quite handy to be able to mouse over effect or instrument controls and alter them using the gently stepped dial on the hardware. It's a feature found in a few other units, notably Steinberg's CI and CMC series, though they are limited to controlling Cubase.

As is often the case, the software control panel provides access to much more advanced settings than the hardware and in this case it's one of the best designed control panels I've seen. The two mic, two digital and two stereo DAW feeds can be managed and controlled easily and even renamed, grouped and monitor mixed. There are pad and phase buttons on the inputs and pan, solo and mute controls on everything. 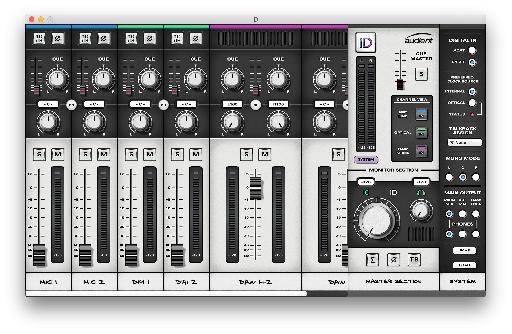 "It's a much more flexible and friendly software control panel than you would usually find with a compact recording interface."

In the Master section you can set up the behavior of the device in more detail, such as switching the function of the iD button from scrolling to controlling polarity, dim or talkback, selecting digital input format, clock source and assigning talkback. You can also choose which signals get sent to the headphones and even save and load console presets for easier switching between setups. It's a much more flexible and friendly software control panel than you would usually find with a compact recording interface and surely benefits from all the development Audient did for the larger units. Despite having a fair few options it's still straightforward to use and really expands the functionality of the hardware.

In everyday use the iD14 sounds as good as you'd hope, its high-end preamps and converters providing crystal clear sound and the independent headphone circuitry providing your cans with plenty of grunt. It's necessary to connect to mains power when phantom powering though when powering over USB for all other tasks it also worked just fine. With 24-bit, 96 kHz support you can capture sound at really high rates too. Having a single data dial with three assignable functions via the three buttons is a nice touch and cuts down on the number of physical controls needed on the box itself, while still providing all the functionality you need.

"If you want your recordings to sound as good as they can but don't want to spend a fortune getting there, the iD14 is a very serious contender."

If you're in the market for a high-quality and compact audio interface with excellent build quality and sound and a surprisingly flexible software control panel, the iD14 is definitely worth investigating. For the quality of the components and the results, the price is definitely reasonable and as any producer will tell you, saving a few dollars and sacrificing quality anywhere along your signal path is usually a false economy. If you want your recordings to sound as good as they can but don't want to spend a fortune getting there, the iD14 is a very serious contender.

Jay Asher
But for me, one of the most important issues is how efficient and how reliable is the audio driver? Can you run large sample libraries on a reasonably new and powerful Mac at e.g. a 256 buffer?
Jason Lee
How's the DAC compared to it's older brother, the iD22? Heard it's got different Burr Brown converters and opamp.
Jason Lee
How's it sound compared to it's big brother, the iD22? Different BB converters and opamps inside.
John M
I purchased my iD14 14 months ago. Loved it. Read on.

The other night I went to mix a session and noticed some serious hissing. The Mic 1 input meter was showing a signal even though nothing was attached. When I turned the gain knob on the unit it produced a crackle that I'm surprised my monitors survived. After some back and forth emails with customer service - including a recording of the issue - I was told that the issue was related to hardware and that my only recourse was to have it fixed on my dime - even though I was barely two months outside of the warranty window. While I understand how a warranty works I also understand that leeway is possible when the onus is on the company who manufactures and sells a $300 product - one which I would expect them to stand behind a little more, especially since the failure was no fault of mine.

My Audient iD14 is now a $300 paperweight. Thanks Audient!