Language
Getting high quality mic pres & A/D conversion with pristine sound quality from an Audient desk in a rack-based unit is now possible thanks to the ASP800. Hollin Jones gives this an in-depth review.

British manufacturer Audient is well known for its studio consoles and increasingly for its more consumer-oriented audio interfaces like the ID22 and ID14. The company also develops kit that falls somewhere in between the two: serious studio gear that will be of interest both to smaller and larger scale producers. The ASP800 is just such a product: an eight-channel mic preamp and ADC that’s designed to provide a higher quality and more professional recording results than you might get with a regular audio interface. With any recording setup, results are only as good as the weakest part of the signal chain, be it cables, preamps or other circuitry. The ideal situation is to maintain quality throughout the signal path.

It’s a 1U rack module and both heavy and solidly built: obviously it will almost certainly be rack mounted even if you travel with it. Most of the connections are made around the back where you’ll find eight combo XLR/line inputs for routing signal in. Each of these has an Audient Console Mic Preamp, a Class A amp that’s the same as those used in the company’s studio consoles. Developed and optimized over a period of 18 years, Audient says its mic pre is used in thousands of pro studios around the world. These sound really clean and clear, though it’s possible to deliberately color the sound too, as we will see. Line out is via a balanced connection and there’s ADAT out with optional calibration so you can expand the system, and Word Clock input for sync. 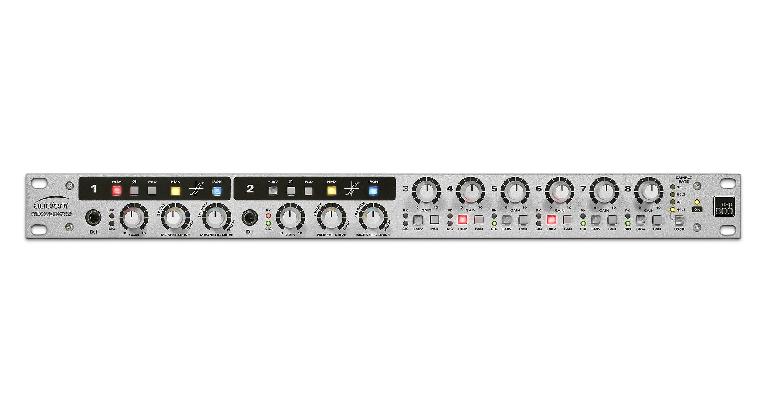 Moving around to the front you find loads more controls. Inputs 1 and 2 have alternative ports in the form of two jack inputs and these are discrete JFET instrument sockets for connecting guitars, basses, drum machines and that sort of thing. Audient calls these “Retro Channels” and that’s because they have access to some additional processing. This is Audient’s “harmonic generation circuitry” and it has two main elements: HMX and IRON. These are designed to emulate the sonic character of '60s tube and transformer circuitry and are intended to add warmth and punch to signal. Both can be switched on or off and each has a variable control.

HMX uses MOSFET Drive to add harmonic distortion to signal when active. It adds richness and body to sound and creates a richer, thicker feel which works well on any source you need to fatten up. It’s relatively subtle but you can definitely tell the difference when you drop it out, as the sound seems to lose some of its vibrance and life. The HMX dial can be turned all the way from “sweet” at one extreme to “thick” at the other, and of course by landing anywhere between those two you create a hybrid effect. 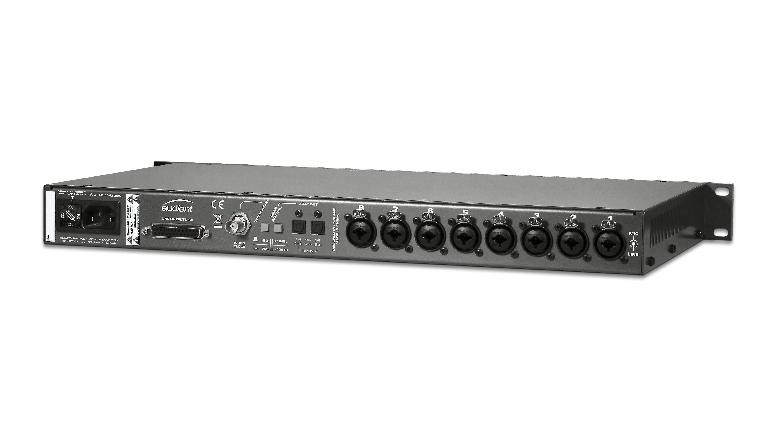 IRON has similar controls though this time the extremes on the Magnetic Drive knob are “sparkle” and “growl”. When active, this section uses a custom British transformer to alter drive, bass response, high frequency damping, phase shift, magnetic saturation and transient shaping all at the same time. The aim is to lend some additional bite to the signal and it certainly does this. The character it imparts is a sort of immediacy and authenticity that’s hard to quantify, but you can end up thinking it just sounds ‘better’! Again, dropping it out can show you what’s being added by the extra processing.

Getting signal from the analogue to the digital domain for recording is the job of A/D converters, and again this can be an area where some kit skimps a little for reasons of cost. The ASP800 uses 118-dB Burr Brown converters which do a fantastic job of maintaining integrity all the way through the chain. The remaining six channels on the front panel have identical sets of controls, with peak and signal indicators, phantom power and pad switches and extremely precise and solid metal knobs for setting levels. At the far right hand side is a sample rate selection switch and you can choose 44.1, 48, 88.2 or even 96 kHz sampling rate and use a Lock control to make sure this can’t be changed. 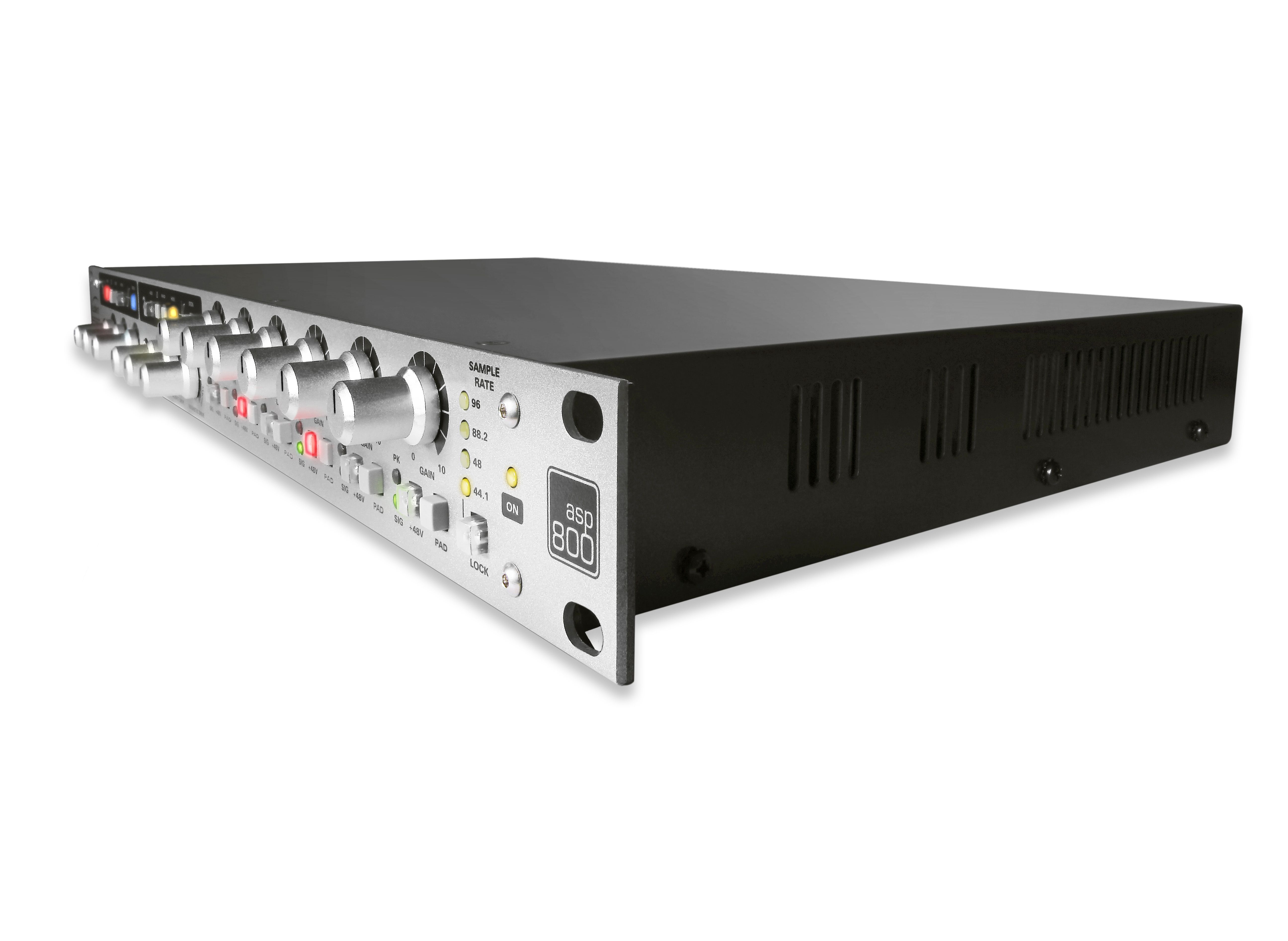 Adding higher quality mic preamps and A/D conversion to any setup is always a good way to ensure the highest possible audio recording quality, especially when you are using great microphones. So a dedicated mic pre unit is a good bet if you are able to factor one into your budget. The ASP800 is a bit more special however since it adds some onboard circuitry to create different sonic results. Although you can of course leave this switched off to capture a pure, clean sound (and processing is only available on channels 1 and 2), it’s really good to have the option of adding some coloration.

Like a lot of this kind of technology the results are subtle but certainly desirable. The character you used to get by recording through analogue gear was always hard to quantify but you could definitely hear it when it was there and when it wasn’t. Shaping your sound using the HMX and IRON circuitry on the two channels here gives you more control over the sound at source, rather than having to tweak it using plug-ins afterwards. And of course for any kind of live performance you’re getting that effect as part of the signal, not having to add it later.

Audient looks to have another winner on its hands with the ASP800. It’s appropriately priced for what it is and will almost certainly help you to take your recordings to the next level. The addition of the sound shaping circuitry gives you the option of adding character as well as capturing perfectly clean signal, both of which the unit does extremely well.

Cons: HMX and IRON on channels 1 and 2 only.