Aston has made a name for itself with its innovative and affordable range of mics. But will the Spirit move Joe Albano? Read on to find out...

A while back, British company Aston made a splash with their first microphone, the Origin—a large-diaphragm cardioid condenser with a eye-catching look and excellent sound. Well they’re back with another model, the Spirit, a more full-featured mic with the same distinctive appearance and, once again, excellent sound quality at a more-than-reasonable price. 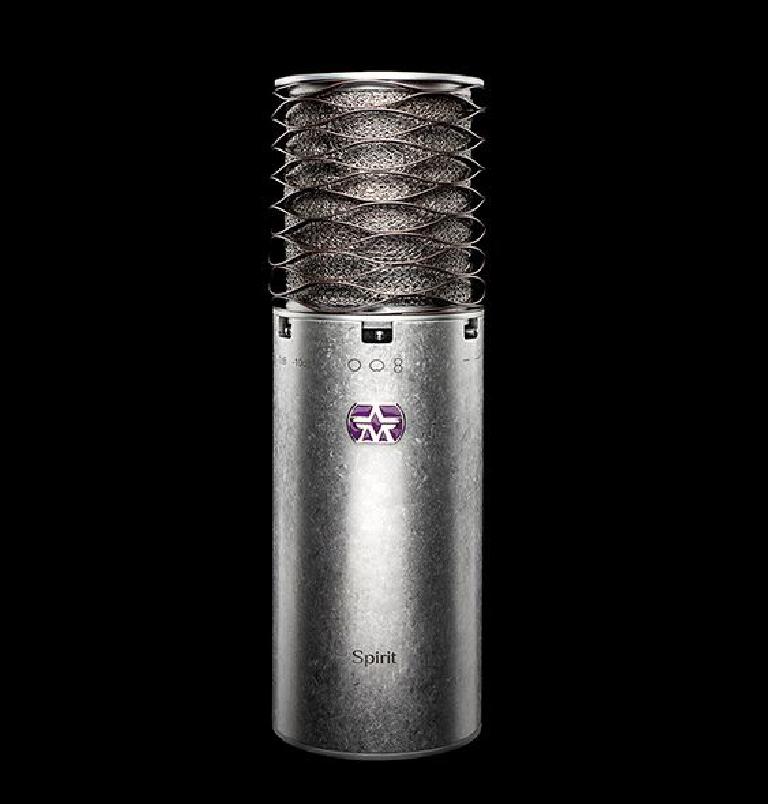 If The Spirit Moves You...

The Spirit shares the same distinctive appearance as the Origin—it’s a bit taller and a tad heavier, with a substantial feel. Construction is solid—a simple cylinder, with a unique grill. The 1” gold capsule is protected by with what Aston terms a Wave-Form Mesh Head. A stainless steel wire mesh pop filter is surrounded by the distinctive shock-resistant grill, which is designed to be able to take a “hard knock” and still return to its original position undamaged (needless to say I chose not to test this—no mic drop for this review). On the body are three solid-feeling switches: the pattern selector, an 80Hz lo-cut filter, and a pad with 0, -10 and -20 dB options. The Spirit is a transformer-balanced design, which could be expected to contribute some pleasant warmth to the overall character of the mic.

On the bottom of the mic there’s the XLR output, along with a stand-mounting thread with an adaptor, for either US or European stand attachments. Usually, with a mic of this type most people would tend to use a shockmount, but the Spirit’s construction seems to make it quite resistant to rumble and footfalls—in my tests I mounted it directly to the stand and there was no unwanted low-end pickup. For those that might want one anyway, Aston offers a couple of nicely appointed Rycote shockmounts as accessories—Custom and USM (universal) models—which complement the Spirit’s unique look with distinctive accents of their own.

The Spirit is a multi-pattern design—Cardioid, Figure-8, and Omnidirectional patterns are on tap. Performance-wise, the Spirit has a maximum SPL of 138dB, a respectable EIN of 14dB, and frequency response is spec’d as 20Hz-20kHz (±3dB)—however, that last spec really doesn’t tell the full story, as the frequency-response graphs show.

As you can see, the cardioid pattern shows a broad, gradual rise from 2kHz, topping out at around +4-5dB at 10-12kHz, with a slight dip (relative to maximum boost) between 5-7kHz. This lends the Spirit a nice detailed high end, but one that’s not overly bright, as with some mics in this price range. The Figure-8 pattern differs a little, with a maximum rise of 6-7dB in that 5-7kHz range and very slight dip (relative to maximum boost) at 9-10kHz. More surprisingly, the Omnidirectional pattern’s response—which is usually (or at least often) the flattest of the bunch—shows the widest variation—a broad dip of a couple dB between 4-7kHz, and a boost of around 8dB centered at 9-10kHz. But of course, graphs like this don’t necessarily reflect what a mic actually sounds like in the real world—when you factor in off-axis response and proximity effect, the differences are always much more subtle than they appear (see the In use paragraph below).

I tried out the Spirit on voice and acoustic guitar. As a vocal mic, it was clear and bright but without any over-emphasized presence. The slight proximity effect (with the cardioid pattern) gave voices a nice subtle warmth (at a normal studio distance of around 6”–12”). Since Aston promises that their “exclusive mesh-knit pop filter...virtually eliminates unwanted plosives”, I tried throwing some nasty p-pops at it (from ≤ 6”), but couldn’t get it to pop—that same test requires an external pop filter from most mics, so high marks to the Spirit in that regard.

The Spirit also acquitted itself well in the classic “key test”—jangling a set of keys in front of a mic will reveal any transient distortion, and is a good indicator of how the mic will perform with metallic percussion and other difficult signals. Less-than-ideal performance in this regard has been a hallmark of many otherwise very fine mid-priced mics, but the Spirit’s response was in line with that of much pricier high-end mics (like my U87).

On acoustic guitar, the Spirit offered nice detail on the strings, coupled with a pleasant sense of warmth and woodiness from the guitar body. I tried all three patterns, to see just how much audible difference there was in actual use. As you can hear in the audio clip below, the upper-midrange and treble frequency response variances visible in the graphs were, as expected, more subtle in actual use, though they were still audible. As with voices, the cardioid pattern was smooth, offering excellent detail (strings and pick noise) without harshness, and a pleasant extra warmth (from subtle proximity effect). The stronger boost at around 4-8kHz of the Figure-8 pattern came through as an extra sense of presence and fullness. Naturally, the omni pattern was a little less full in the low end, and a tad more distant, which jives with the slight dip centered around 5kHz, but very clear, detailed, and well-balanced.

The Spirit on acoustic guitar (Cardioid pattern, around 12” from the 12th fret)

The Spirit offers all the classic detail and richness of a high-quality large-diaphragm condenser at a very reasonable price point. Even in full nitpick mode, the only “fault” I could find was the lack of a fancy case to match the mic’s good looks, but the simple eco-friendly packaging is certainly good for the environment, and probably helps keep the price down. I’d recommend the Spirit wholeheartedly to anyone who’s looking for either a primary condenser for a small studio, or another LDC to augment an already well-equipped mic closet.

Learn mic techniques and recording with pro courses in the Ask.Audio Academy here.