Language
The Aston Origin has caused quite a stir since it was introduced, but does it really live up to the hype? Matthew Loel T. Hepworth compares it head-to-head with three other popular microphones.

As a company, Aston is new to the market. However, the team behind their products has been around quite a while. I had a chance to speak with James Young prior to hearing the microphone. It was great to chat with someone who brims with enthusiasm for their product, which in this case was the Origin, a very affordable side-address cardioid condenser microphone. While it has many unique features, one of the most interesting is that this $249.00 (street price) microphone is made in the U.K., rather than in Asia like many of its competitors.

Word circulated quickly that the Origin sounds much better than its low price might imply. I’d already decided to compare it to a few of my favorite sub-$500 mics, but James specifically asked that I put it up against a legendary Neumann U 87. That was a bold request, especially considering the $2,951 price differential. I asked James if the Origin would sound like a Neumann. His answer was, “No, but it will hold its own against that and many other highly regarded mics.” While I was initially skeptical of that claim, I was excited to hear the difference.

The Origin ships in 100% recyclable packaging, and doesn’t include a shock mount or case. The size and shape of the microphone are reminiscent of a can of Red Bull energy drink. The chassis is all metal and the capsule is surrounded by a combination of a woven steel mesh and a very stiff grille with large oval vents that won’t dent as easily or irreparably as traditional side-address designs. The grille is slightly springy, and the steel mesh acts as a pop filter. James said that some users don’t use a secondary pop filter, but I did encounter some plosives during my tests. Therefore, I’d recommend using a pop filter for vocal and brass recordings. 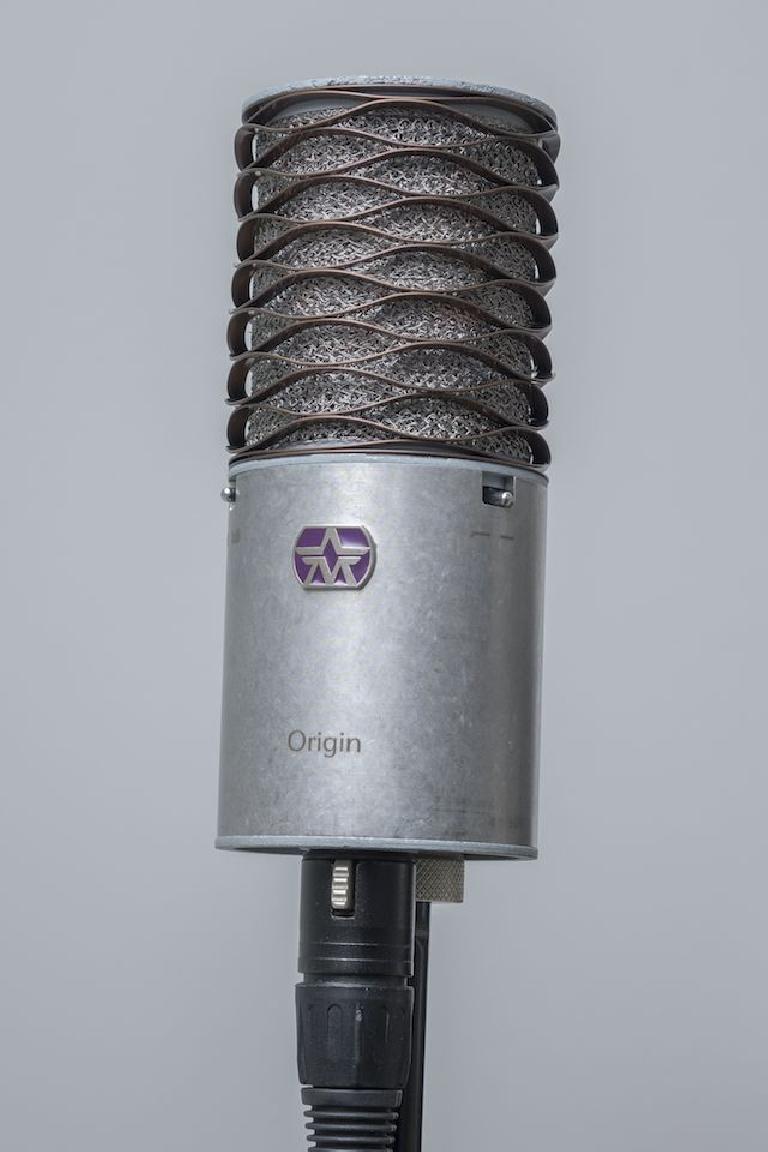 The Origin has mic stand threads in the base, and the internal shock mount does a respectable job of separating the capsule from the stand and floor. While this is a very convenient setup, it’s likely you’ll need a third-party mount for getting the Origin into cramped spaces with odd angles like individual drums on a drum kit. There are 10 dB pad and low cut switches on the front that click solidly when moved, lowering the risk of accidentally bumping them when repositioning the mic. The chassis is neither painted nor coated, which gives it an industrial yet pleasing esthetic. The switch labels, product name, and tag line of “The Art of Performance” are laser-etched into the body. The build quality is extremely good, and the solid feel would have you believe this mic should cost significantly more than it does.

Maximum SPL is 127 dB, or 137 dB with the pad on. Sensitivity is 23.7mV/Pa, and the noise is 18 dB A-weighted. (More on the self-noise a little later.) Aston assembled a team of audio professionals to decide on the 1” gold evaporated with which the Origin is equipped. The Origin works best when supplied with full 48-volt (+/- 4-volts) phantom power, so make sure your mixer or preamp can supply the requisite power.

Watch the video element of this review here:

I first tested the Origin by recording a female vocalist. The mic initially sounded quite thin. But I quickly realized I’d left the low-cut filter on. Correcting my error resulted in a full, rich sound, and the top end was wonderfully breathy. Then I recorded a Taylor GSce-FLTD steel-string acoustic guitar and got a very natural response. The pick noise was nicely balanced against the vibrating strings. The Origin is a very easy microphone to record with, so long as you know it has a potent and pleasing upper-mid response.

Next I recorded my RainSong WS1000N2 steel-string acoustic guitar and my own singing voice through the Origin, along with an AKG C 4000B, Audio-Technica AT4033/CL, and aforementioned Neumann U 87 Ai. 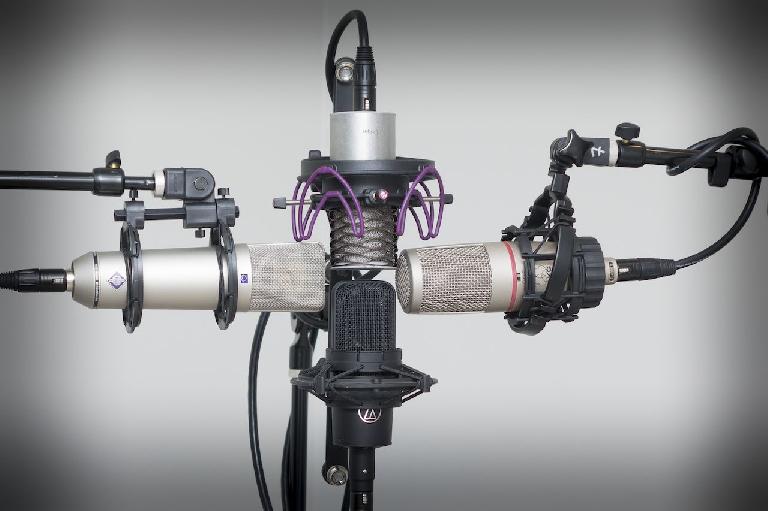 The Origin certainly had the most midrange and allowed the vocals to punch through the mix with ease. The low-end wasn’t as rich as the AKG, and overall wasn’t as natural-sounding compared to the Neumann. The AT4033/CL (one of my favorite recording mics) came the closest to matching the midrange of the Origin, but I have to admit that I preferred the Origin in this all-important respect. All the mics did a great job capturing the nuances of the guitar and vocals. In the end—and just as James had claimed—the Origin did hold up very well with the competition.

The only thing I noticed that was slightly disappointing was the self-noise. All the other microphones had a little lower audible hiss than the Origin, with the Neumann producing the least. (For the $3,199.95 price, the U 87 had better be quiet. Also, the Neumann EA 87 shock mount alone costs significantly more than the Origin itself!) Granted, all the other mics cost tens, hundreds, or thousands more than the Origin, so it makes sense that something had to give. Be that as it may, the noise won’t be a major distraction unless you’re recording subtle solo instrumentals.

Here's a "blind" microphone test using all four above-mentioned microphones. See if you can figure out which is which. Answers will be below...

So, which microphone did you prefer?

Living Up to the Hype

I was truly surprised by how good the Origin sounds, especially when compared to more expensive microphones. The midrange certainly sounds British and gives you plenty of options for post-recording tonal treatments. It’s refreshing to add compression to a recording without feeling the need to compensate for the usual loss of high-mid and high frequencies. Sure, you lose some of the accessories that come with more expensive microphones. However, if price, sound character, and build quality are important to you, you really should check out an Origin, or for those that need omni, cardioid, and figure-of-eight patterns, the similarly affordable Aston Spirit. (I’d love to try one of each in an M/S configuration for a mere $648.00 street price.) In a crowded field of capable recording microphones, the British-made Astons certainly have a lot to offer for a minimum of investment.

Cons: Slightly noisy, and a case and shock mount are not included.