Aston have added the multi-voiced Starlight pencil microphone to their lineup of condenser mics. But is the world's first laser-equipped mic useful, or a gimmick? Matthew Loel T Hepworth finds out.

If Dr. Evil (from the Austin Powers films) needed a microphone, he’d certainly pick the Starlight. After all, it has a frickin’ laser beam attached to its head! That may seem strange at first, but not if you’ve ever struggled to repeatedly and predictably orient mics to the ‘sweet spot’ of a recording source. While the laser might be both useful and cool, what really counts in any microphone is its voice, character and sound. Aston are quick to point out there are many unique features of the Starlight beyond the laser, so let’s see how the whole package measures up.

A Starlight can be purchased alone or in a matched pair. Aston was kind enough to send me the latter, which comes complete with both fixed clips and (Rycote) shock mounts, as well as a stereo mounting bar. Windscreens are included, as is the owner’s manual (covering all the Aston products, not-so-subtle marketing hint taken) and snazzy Aston lapel pin and sticker. Like the other Aston mics, the Starlight is built in Great Britain.

Side view in fixed clip

The mic itself is just over 7” long and about the diameter of a US quarter (25¢ coin.) The head is comprised of sintered metal, which is a simple way of saying many tiny (and I do mean tiny) little beads. This sintered design is similar to the venerable AKG D190 still used by The Vatican and by pontiffs past and present. It’s a great method for building an acoustically transparent yet durable microphone head, but Aston took a great deal of time (and certainly expense) updating the process to take full advantage of what modern sintering can provide, most notably in terms of off-axis high frequency response.

In other words, the Starlight won’t lose top end when it isn’t perfectly on-axis, and that’s thanks to Aston tuning of the head to the capsule within. That capsule is a 20mm gold-sputtered diaphragm matched with a discrete mic amp with multiple voicings. (More on that later.) Aston chose the capsule based on a blind listening test by 50 audio experts.

The body looks like a warp engine from the star ship Enterprise (from the original series) and is crafted in the same tumbled stainless steel found in their Origin and Spirit mics. The laser is mounted along the dorsal as are four multi-position switches. As with any laser-equipped device, there’s a warning label to remind you about safety. The serial numbers for the stereo pair models are also matched and differentiated by the letters ‘A’ and ‘B’.

There are four switches on the Starlight that are very crisp and snappy to operate. The Laser switch turns the emitters on and off, the voltage for which is supplied by the phantom power; no separate laser battery required. The Voice switch selects Modern, Vintage, or Hybrid tonal characteristics, and the Cut switch has off, 80Hz, and 140Hz low-cut filters.The dB switch activates a -10 or -20dB pad with the 0dB setting in the middle. 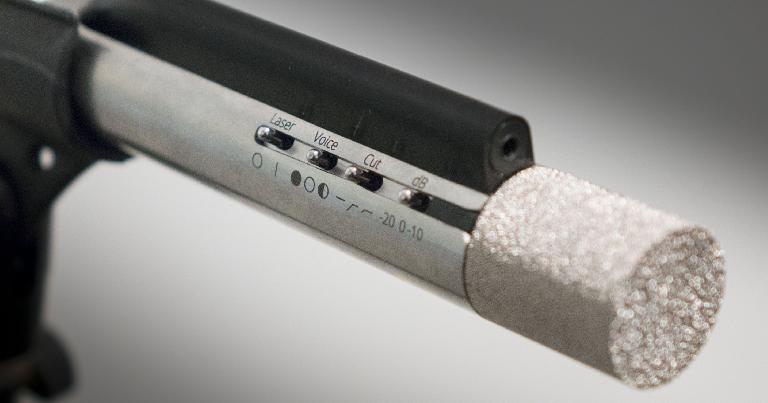 Warming Up The Voice

The Starlight’s frequency response is really telling, and is exactly what you’d expect in a pencil microphone. It’s virtually flat from 100Hz to 5kHz, but the responses below and above that range can be customized with the Voice and Cut switches. The manual describes the frequency basics, but each Voice setting distinctly changes the entire sonic personality, in essence giving you three mics in one. In the most general of descriptions, Modern gives you the most bite, Vintage the warmest and most natural response, and Hybrid provides overall neutrality with more body in the low end. You’ll want to try all the settings with different sources because each personality within the Starlight will garner different results.

Since many readers will want to know how the Starlight compares to the often-used KM 184, the Vintage mode is the most Neumann-esque to my ears. However the KM 184 starts to roll off naturally at 150Hz (capsules with low-cut can be purchased), whereas the Starlight provides more low end response. So if you’re trying to approximate the low end of the standard KK 184 capsule, make sure to try the 140Hz cut. Whichever setting you prefer, having a mic with these multiple personalities means you’ll spend less on mics while not enduring the put-up/take-down time required for changing between a fistful of transducers. (Admit it, you just heard an Ennio Morricone score in your head.)

Getting to the Point

The laser is one of those ‘why didn’t anyone do this before’ features. It makes quick work of mic placement by letting you surgically select the sweet spot. It doesn’t measure distance, so you’ll still need to take notes accordingly either by writing them down or taking photos and saving them to your DAW recording folder. (If you’re recording to analog media, shoot with a Polaroid and throw the pics in the tape box for ultimate vintage cred.) 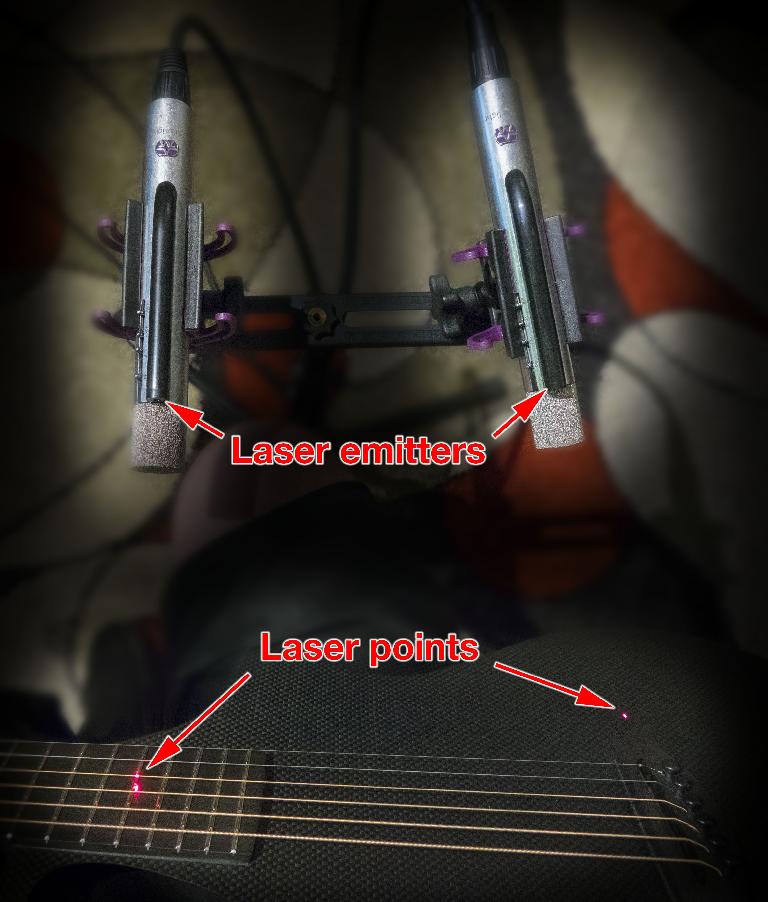 A few years ago I engineered and mastered a classical guitar book and CD project called, “A Collection of Fine Spanish Guitars from Torres to the Present” by Sheldon Urlik. We recorded 76 of his classical and flamenco guitars, some of which dated back to 1867. The concept was to record each instrument with the exact same mic position so that the unique personality of each guitar could be captured and compared. I used a pair of KM 184s for that project. While the producer, performers (Kenton Youngstrom and Richard Bruné), and I were all happy with the results, it was a challenge to keep the microphones positioned consistently. The Starlight lasers would have made that process much easier, and they can save both live and studio engineers valuable time getting the mic placements ‘just right’ over and over again.

(Note: Even thought the 650nm [red] laser has a low-power output [0.9mW], always turn it off after making placement adjustments to prevent any unsafe ocular exposures to performers and studio personnel alike.)

The first instrument I recorded during this review was an acoustic guitar. After making some initial placements, it was clear the Starlights and I were going to be fast friends. They instantly sounded right on the money, somewhat like the KM 184 but with a solid low end and certainly more sparkle with the Modern setting. Vintage and Hybrid modes provided more neutral high frequency responses. Next, while I generally prefer large diaphragm condensers for drum overheads, the low end response of the Starlights sounded nice and tight, and the Modern setting let the cymbals shine through. Just for fun I recorded a female jazz vocal which sounded very open and airy in Modern mode, and more ‘60s and ‘70s era in Vintage and Hybrid modes. (I didn’t need a pop filter, for the sintered head didn’t let any plosives through.) The Starlights performed flawlessly with every source I threw at them.

The Starlights are bigger and heavier than some of the competition, which could impact using them in tight spots. For example, the KM 184 is 126mm long (with capsule) vs. 181mm for the Starlight, and 22mm wide vs. 36mm (including laser), respectively. But by another comparison, the Shure SM81 is noticeably longer than the Starlight, but a bit thinner. (I’m not saying the Starlights are huge, just bigger…sometimes.) I thought I could reduce the length with right-angle cables, but the XLR outputs are mostly shrouded and make that option impossible. Perhaps there are more exotic plugs out there, but neither the standard Switchcraft nor Neutrik plugs would fit. While I may never need to reduce the mic length, it’s too bad the ol’ right-angle trick won’t work in this case.

The laser—albeit wonderfully functional—is permanently affixed to the chassis in its own black plastic housing, which gives it an ‘added-on’ esthetic. With the body metal being so (using my Immortal Joe impersonation from Mad Max: Fury Road) shiny and chrome, the difference in materials is a little obvious. Frankly the lasers are so useful I wouldn't care if the housings were polka-dotted. But while the metal chassis is extremely durable, I’m not sure the laser housing would survive many accidental drops.

The Starlight has many unique technological ‘firsts’ including the sintered head-to-capsule tuning and the laser. With such pleasing sonic results, I had to remind myself that these mics only sound expensive. For example, a matched pair of Starlights (that come with shock mounts and stereo mounting bar) will cost over $100.00 less than just one single-capsule Neumann KM 184. (The 184 comes with only a plastic clip, windscreen, and just like the Starlight, a cardboard box.) A single Starlight costs the same as a Shure SM 81, but the latter don’t come in matched pairs and therefore, stereo mounting hardware will cost extra.

If you regularly book clients who demand Neumanns (or any specific mic), you should certainly satisfy your customers and make the big investments or rent those mics frequently. But if you want a pencil mic (or two) that give you comparable performance without the big name and associated price tag, you should definitely check out the Starlight. Plus you’ll get three voicing personalities and the ‘frickin’ laser’.

Cons: Physically larger that some competitors. Laser housing is plastic, not metal. Might not have the name recognition to satisfy picky customers. Not compatible with most right-angle XLR cables.

Learn more about recording techniques in the AskAudio Academy NOW!