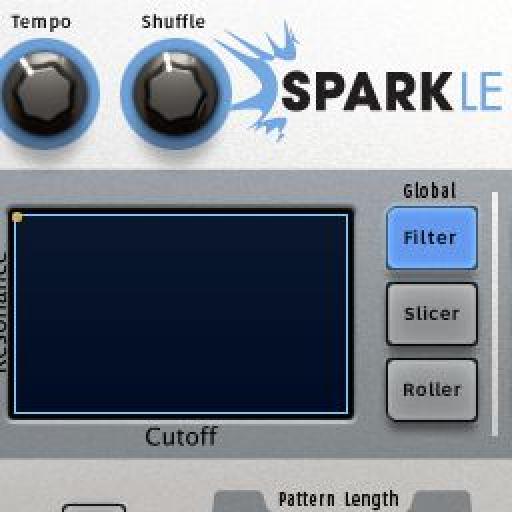 Language
Arturia's Spark was critically acclaimed by Mo Volans earlier in 2013, so how doe the slimmed down, more portable Spark LE perform? Find out in our detailed review.

Back in March 2013, I took an in-depth look at the excellent Spark hybrid drum machine from Arturia. For those of you who liked the look of the Spark but fancy something a little more portable, you are in luck.

Arturia have just released the Spark LE, (USD 299 / EURO 249) a more compact and slightly trimmed version of its larger predecessor. If this sounds good, keep reading as I go through the finer details and you can decide whether or not to part with your hard-earned cash.

I really enjoyed having the original Spark in the studio, I used it on a few projects and even considered hanging on to it. After I'd lived for it for a while, it became apparent that the unit was just a bit large for my desktop. Without losing something from my existing set up, I just couldn't house another large device.

A short time after Spark had shipped back to Arturia, I started to see shots of a new compact version. I knew I had to get my hands on it and I'm happy to say that I've had a Spark LE neatly slotted into my desktop set up for a couple of weeks now. 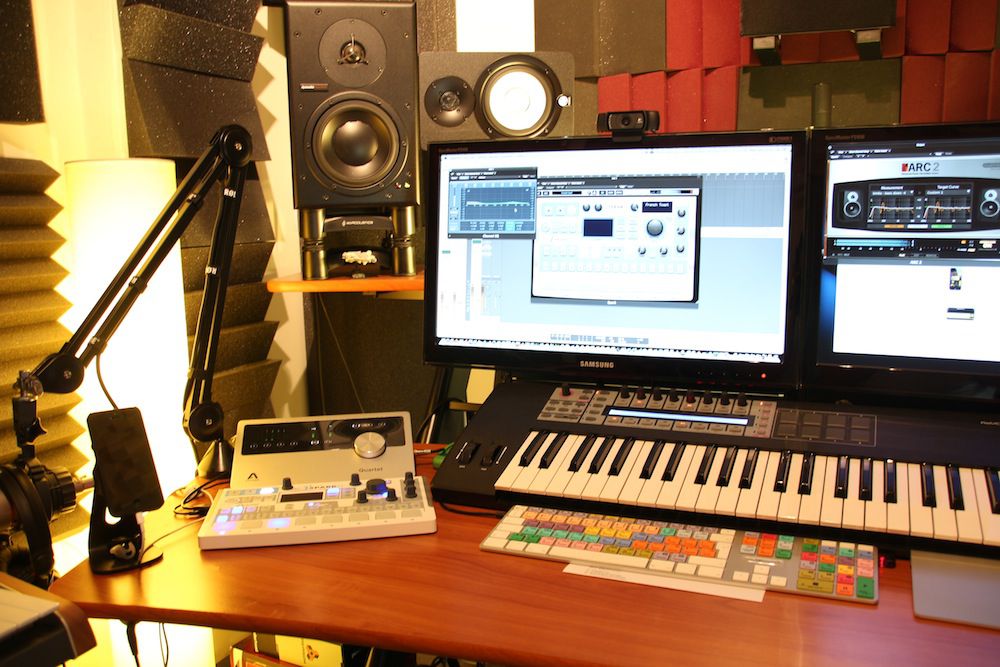 Spark LE tucked into my desktop set up.

So far I've been enjoying the same experience (if not better) than the original Spark but the LE takes up a fraction of the space. Let's take a look at how this version differs from the original and what we lose out on due to its diminutive stature.   Small things...

There's certainly no doubt that both large and small versions of Spark share the same DNA. The color scheme, knobs, buttons and LEDs all follow the same design ethos but this really is where the similarities end. The form factor and interface differ pretty drastically.

Arturia have actually used some pretty ingenious touches to pack everything into the smaller frame, some of which actually add extra functionality. For example, there is a new X/Y style touch pad right in the center of the front panel that allows you to perform various tasks that just weren't possible with the original unit. 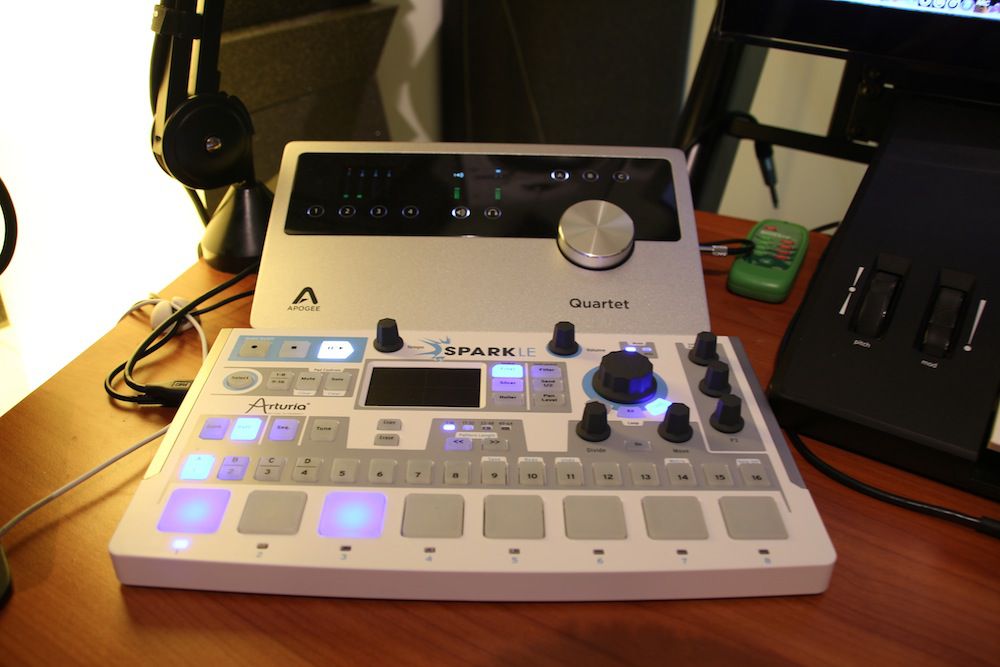 The Spark LE front panel is compact with a built-in touch pad.

I've found myself performing filter tweaks, applying rolls and even stutter effects via the touch pad. All of these are only available in the LE version and I for one really like the new features.

There are also a few extra additions in the form of buttons. One of these is a handy tune control button. This allows you to 'pitch' drum sounds and samples and even play individual sounds like a synth patch.

I had a few niggles with the build quality of the original Spark. Don't get me wrong, it wasn't bad! There were just a few details that I felt could be improved, namely the thin plastic supports (or feet). The Spark LE doesn't suffer from any of these problems. The whole unit feels really solid and well put together.

The unit is mostly constructed using plastic, bar a metal base, but it feels as if it could quite happily survive the rigors of the road. On top of this, it comes with a cool little zip up carry case. I've found it slips neatly into my laptop bag and sits nicely in front of a Macbook Pro. No accident I'm sure!

It's refreshing to see that the actual software hasn't changed much. At first glance, it may appear otherwise but essentially the plug-in's main interface has only changed to accommodate the altered hardware. It's really just aesthetic, the internal sound bank and overall operation really remain the same here. The only real change to the software is the graphical representation of the hardware.

After using the original software I was able to navigate to the spots in the library the identical sequencer function and even use the mixer in the same way. As far as I could tell, the only differences were the graphical representation of the controller. The sound editing capabilities remain the same in the LE version...

The sound library in both versions of Spark are truly excellent. I said something similar in my first review, but I really have enjoyed both the individual hits and patterns that Arturia have put together here. They sound both timeless and relevant... a neat trick if you can pull it off. 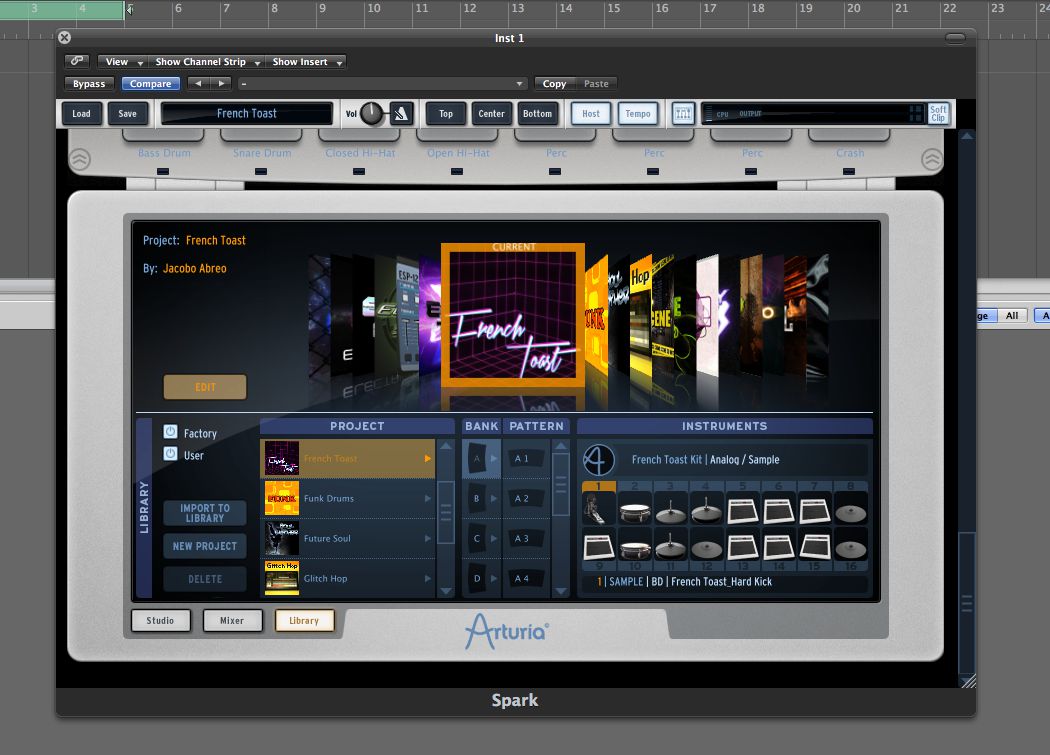 ... as does the excellent factory Library.

The Library tends to use a mixture of what appear to be samples and synth generated sounds. The only criticism I have here is that some of the synthesized drum sounds, such as the 808 and 909, are perhaps not as realistic as other examples that I've heard. This isn't to say that they aren't good but perhaps not quite up to the standard of exact sample-based kits. 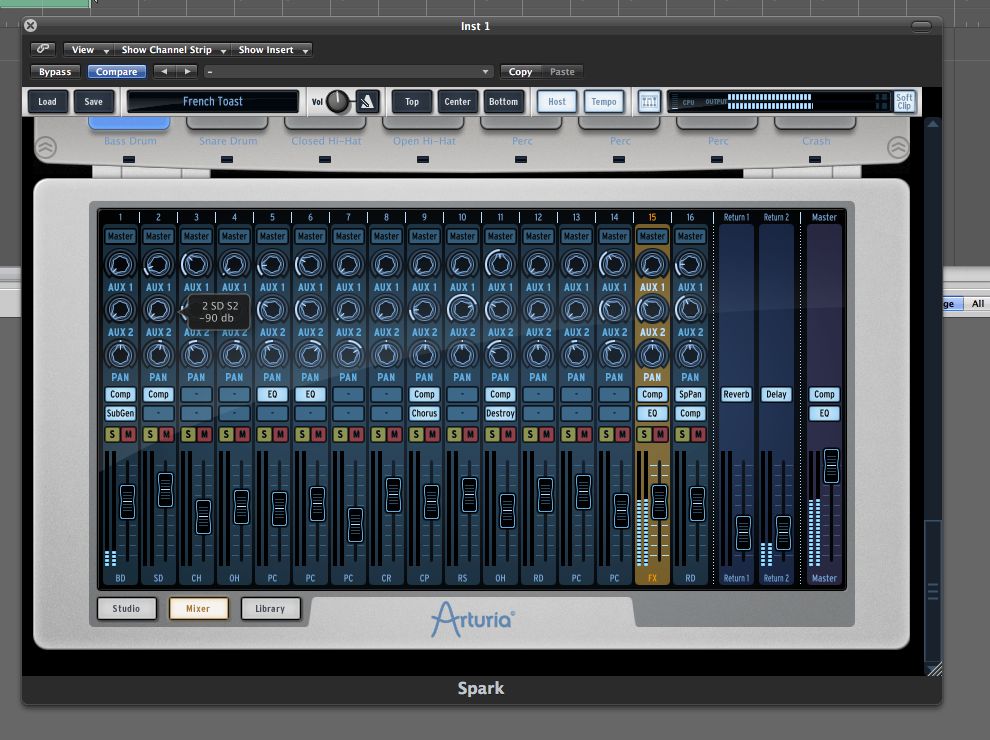 There are also no changes to the internal mixer and processing.

Both versions of Spark are excellent drum machines (or controllers). Either one would be a sound investment for those looking for a rhythm production solution. If you would prefer to access more of Spark's internal parameters straight from the controller, or if features such as an onboard display are simply essential then you should go for the larger version and just accept it'll take up more space on your desk!

If you are like me and you can live without these extra hardware controls and value your precocious workspace, then Spark LE is probably the one to go for here. The X/Y touch pad is an excellent addition and the workflow of LE is outstanding. In all honesty, I just haven't missed the larger controller. A small display might be the only thing I'd add, but I guess this would have defied the point of a much cheaper product.

In my opinion, you aren't going to regret parting with your cash for either version of Spark, they are both great products. More straightforward than Maschine and more flexible than a hardware MIDI device. If you want extra control go for the big version, and if you need the space and portability grab the LE. These are probably some of the best hybrid drum machines currently being built.