Language
We could simply tell you Arturia's MicroBrute is a monophonic hardware synth with analog audio signal path, CV In/Out & impressive sonic ability. But that doesn't come close to describing its beauty.

Arturia has built their reputation on fantastic digital emulations of classic analog synthesizers. As their controller and other hardware output grew in recent times, it came as no surprise when they eventually stepped into the burgeoning analog synth market with the MiniBrute. Employing the talents of famed French analog circuit-maker Yves Usson, they designed an affordable yet high-quality analog synth with a wealth of hands-on controls. Building on the MiniBrute's resounding success, they opted to package a similarly-focused yet tactile monophonic analog synth in a smaller portable size for traveling live acts and producers—while at the same time opening it up with CV inputs and outputs for seamless integration with modular analog systems. The result is the MicroBrute. Officially, Arturia recommends a 5-10 minute warm-up period for the three analog oscillators to get in tune, but that didn't stop me from tweaking it right away. There's no preset banks in this bad boy, so dialing in your sounds is a physical process—same as it would be on any classic synth from the era that inspired it. As such, it's a great synthesizer for someone learning basic synthesis, and while it'll be easy to use for any experienced synth practitioner, that isn't to say it isn't full of options to keep even the most savvy gearhead engaged.

"It's full of options to keep even the most savvy gearhead engaged."

At the MicroBrute's heart, we have four core oscillators to build our sounds. The first is a fat sawtooth oscillator, accompanied by an “Ultrawave” tone shaper that layers in two slightly offset copies of the same saw wave for added texture. Next, we have a square wave complete with pulse-width modulation, and a warm triangle wave with a “Metalizer” control designed to help emphasize transients with a sharp edge. Finally, the Overtone oscillator by default adds a sub-octave to really beef up your output—but for added value, the harmonics of the overtone can be morphed via the Sub-Fifth dial to a perfect fifth above the root note, providing the illusion of polyphony and a more expansive top end. 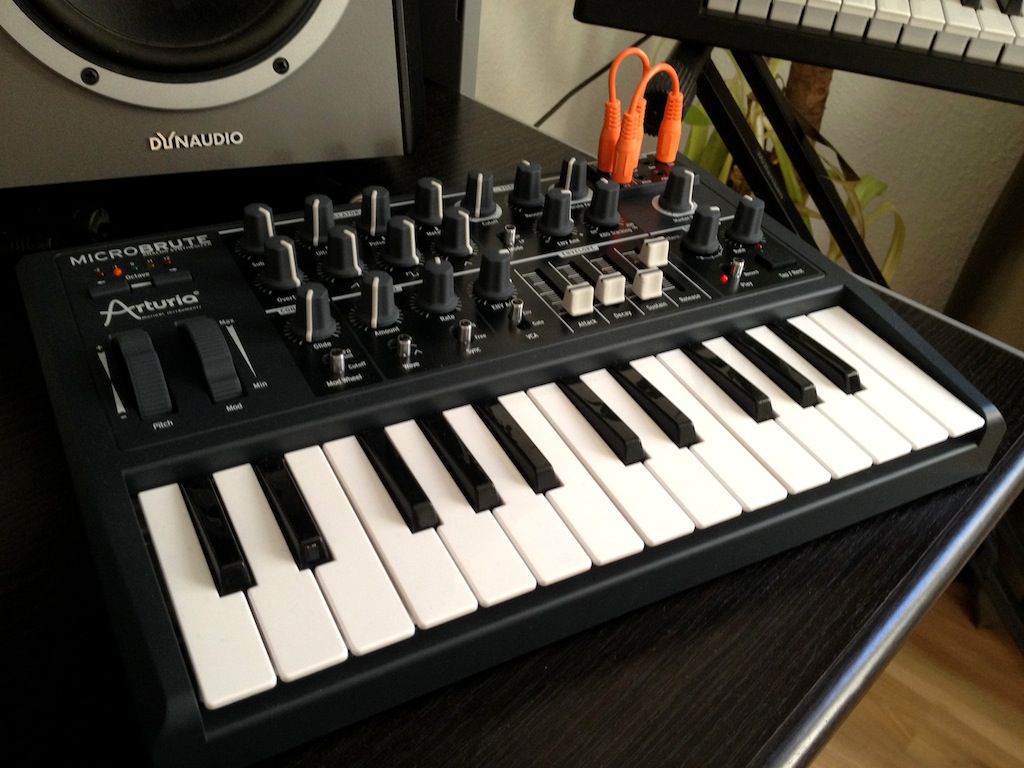 Opting for continuity with their MiniBrute by implementing the same Steiner-Parker filter, the -12dB/octave multi-mode circuit comes with low pass, high pass and band pass, selectable via a handy three-band switch. Envelope Modulation and Keyboard Tracking are hardwired, while the self-oscillating circuitry allows for some intriguing sound design possibilities even with all the other oscillators switched off: just crank the Resonance dial to maximum and use the Cutoff knob to set the current pitch—though you'll want to have the volume turned way down when doing so. Add in the Brute Factor knob—based on an emulation of a classic routing from the headphone output back to the input for an integrated feedback loop—and you've got some serious, hard-hitting sounds that earn the unit its barbaric name.

The MicroBrute's slider-controlled ADSR envelope is already mapped internally to the filter, and can be applied to the amplitude as well via switch; tweaking the sliders in real time easily results in some dramatic, hands-on shape-shifting. The built-in LFO comes with three waveforms: square, sawtooth and sine, with a host-syncable or free Rate, and an Amount dial. However, the LFO isn't mapped to anything by default—that's where the MicroBrute's patch-bay modulation matrix comes into play.

"Getting creative with the routing is what makes the Microbrute so much fun—and ensures its usefulness in the studio for years to come."

Since there are only two CV output modulation sources—the LFO and the envelope—the unit only comes with two cables, which plug into the corresponding mini-jack patch-bay in the upper right corner. There are six modulation inputs to choose from: Metalizer amount, Ultrasaw amount, Square wave pulse-width, Overtone sweep, Filter Cutoff and Pitch. Arturia recommends routing the envelope to the Metalizer for angular, percussive noises, and you can achieve a classic wobble sound by routing the LFO to the filter. However, getting creative with the routing here is what makes the MicroBrute so much fun and ensures its usefulness in the studio for years to come. You can route the LFO to the pulse-width input for unique textural intensity, or control the Overtone harmonic frequency via the envelope for dynamic stabbing sounds—experiment and tweak away. But this only hints at the true possibilities: the mini-jack CV inputs and outputs on the MicroBrute are compatible with the same CV control sources that you would find on any modular analog rig—so whether you already have a modular rack on hand, or just happen to be popping into a studio that has one, the MicroBrute has truly infinite expansion capabilities—which would be difficult to imagine in any other piece of kit this small.

At first I wondered: why bother including mini-keys on a unit like this? They're a bit tricky to play on, and the unit could have been even more portable without them. Then I realized they wouldn't have been able to include the built-in Step Sequencer without some kind of note input, and that's when it all came together.

With eight selectable patterns that can easily be written over on the fly, a tap tempo button, and a Rate control dial, the Step Sequencer adds a lot of value to the unit, allowing users to come up with melodies and basslines that would be difficult to write any other way. What makes it even more unique is that any sequence can be easily transposed in real time by triggering it from a new key on the keyboard.   If you want to sync the sequencer to your host's MIDI clock, you'll need to open the included MicroBrute software editor, connect it via the included USB port, and change the unit settings there—where you can also change MIDI channels, store and recall sequences, and much more.

Brawn for the Road

In all honesty, this was one of the most difficult product reviews I've ever had to write—because I couldn't take my hands off the damn thing! While the vast horizons of digital synth plug-ins loom ever larger, there's something to be said for the creative focus that hardware limitations present. Whether you're a traveling live act looking for a great-sounding portable synth, a studio rat looking to add an affordable analog unit to the rig, or a beginner looking for a pathway into the realms of synthesis, the MicroBrute is an amazing deal that meets all these needs with savage style.

"This was one of the most difficult product reviews I've ever had to write—because I couldn't take my hands off the damn thing!"