Language
If you're looking for beautifully constructed 88-key MIDI controller with a quiet keybed, excellent included software and a large soundset, then you might be in luck with the Arturia KeyLab 88.

I see a lot of MIDI controllers in my capacity as Ask.Audio guru, touring keyboardist, keyboard tech, and sound designer. Checking out a new controller is not typically at the top of my list of things that excite me, but the KeyLab 88 is definitely an exception. I’d heard quite a bit about Arturia’s boutique design and I also had some experience with their sounds as an owner of Mini V. I was excited to see what their take on a MIDI controller could be, and I was very happy when the KeyLab 88 arrived at my doorstep.

The concept behind the KeyLab is a pretty simple one. A beautiful aesthetic (I mean, the keyboard really looks like Jony Ive designed it. It’s classy and simple in design) meets complete and total customization with intuitive software. On these three counts, Arturia was completely successful. The KeyLab 88 looks stunning, and there is no excess visual clutter. Paired up with a wonderful aesthetic is an excellent feel. The Fatar keybed is known as the Porsche of the digital piano world and Arturia’s implementation of it is spot on. In fact, I was incredibly impressed with how wonderfully quiet the keybed was! When I compared the volume level of simply pressing the keys of the KeyLab with all of the other keyboards in my studio, I found that the KeyLab bested them all. I don’t know how they did it, but Arturia somehow managed to make a controller that feels like a real piano and yet doesn’t come with the mechanical ‘thwump’ that most 88 weighted controllers have.

Another point in the ‘win’ column is the inclusion of 9 sliding faders. It baffles me when keyboard designers only include 8, as a majority of folks using a MIDI controller will want to emulate an organ at some point and having 8 leaves you one short in this department! There are 10 programmable parameter knobs, as well as 10 edit parameter switches which double as ‘snapshots’ for loading presets.

I’ll go on record here and say that the MIDI control center which allows you to program the KeyLab is my favorite MIDI configuration software of any controller, hands down. It is downright simple to use, it looks as good as the keyboard does, and is wonderfully responsive. I know keyboard manufacturers are typically looking to keep costs down, but in this age where we can transfer gigabytes of data in seconds, I could never understand why it takes minutes to have my computer ‘tell’ my MIDI controller something as simple as ‘invert the sustain pedal’. This isn’t the case with MIDI Control Center. The software has a photographic representation of the KeyLab (instead of some weird schematic), and updating the keyboard is fast and easy to do. 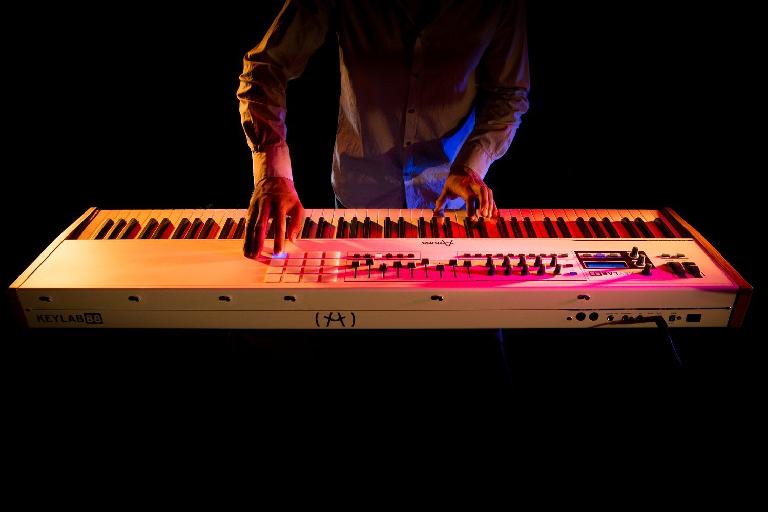 You can even play the KeyLab 88 in the dark!

The included sounds with Analog Lab are also top notch, and pre-mapped to utilize the controls of the KeyLab in a really intuitive way. You also get the stage edition of the awesome Pianoteq 5, as well as the UVI Acoustic Grand Piano’s Steinway Model D concert grand. That’s a pretty sweet lineup for an included bundle of instruments. All of them include keyboard maps that work seamlessly with the KeyLab.

The KeyLab looks beautiful, feels wonderful, cuts down on keyboard noise in the studio, and is seamlessly integrated with a host of included synth and acoustic piano sounds. You’re definitely paying a premium for the beautiful design and feel here, at $799 it might be a teensy bit higher priced than some of the ‘no-frills’ unweighted 88 key controllers. The frills you get, however, are fantastic. If you spend a lot of time with your fingers on the keys, the Arturia KeyLab 88 is a boutique choice that will make your fingers and ears very happy.

Cons - Tiny LCD for onboard programming, although you’ll want to do most of your programming with the MIDI Control Center Software - it’s quite nice.