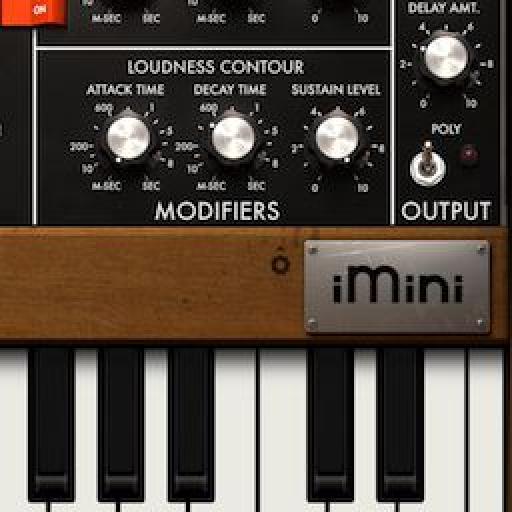 Language
When Arturia announced iMini for iPad there was literally a stampede of writers trying to get their hands on it. Hollin Jones persevered and discovers it's more than just a pretty interface!

It feels like 2013 is the year that the iPad is finally starting to be taken seriously as a platform for music-making. There have been music apps around since the devices first appeared of course, but the quality and variety seems to be increasing at an exponential rate. For musicians, this is amazing news, and more of the big hitters are now getting in on the act. Arturia is an obvious candidate to come up with something cool for iOS, given its history as a developer of virtual synths, and iMini is based on the classic 1971 Minimoog, recreated using Arturia's TAE synthesis technology. The introductory price is USD 9.99 / EURO 8.99 / £6.99 and it's a fairly modest 61MB download that runs on an iPad 2 or higher including the Mini, and requires iOS 6.

The app's main screen contains most of the sound generation controls, designed to work with the touch interface. You can play with the three oscillators, mix them together and adjust modifiers as you would in the desktop version, the Mini V. We don't have space to get into great detail about this but suffice it to say it's intuitive and rewarding, and the Mini's synth controls are among the more easy to understand so you can tweak and morph sounds without needing to be a synth genius. 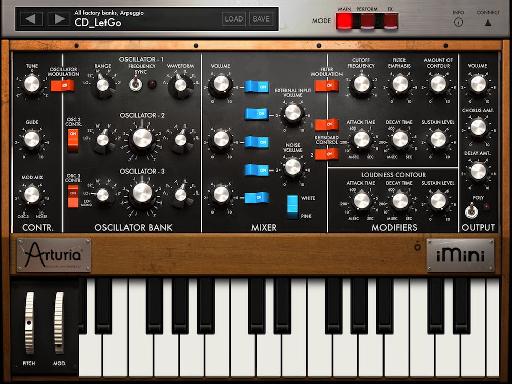 What's that coming over the hill? It's a Moog!

There are over 500 presets and the app can share sounds with the desktop version, meaning patches you design in one can be easily opened in the other. Loading and saving patches in-app is simple and they are grouped by category. The file names all have underscores in them as they do in many of Arturia's desktop instruments, which won't bother everyone but always looks a little untidy to me. The presets themselves are really excellent and the synth is capable of rich, deep basses, authentic sounding leads and great analogue sequences. 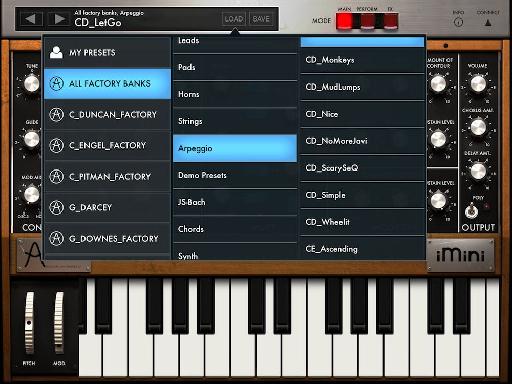 The presets sound great, though I'm not sure what's with all the underscores.

Tap a button and you are able to control the behaviour of the onscreen keyboard, enabling pinch to zoom and swipe to scroll, which are handy, as well as altering scales, octave, legato and glide. So playing the synth from the screen is more expressive than in some similar apps. The second page is called Perform, and contains two X/Y grids for real-time sound morphing. Tap on the control panel for either and you can drag to reassign each axis to any of the dial-based controls, which is a really nice touch and beautifully implemented. Here you can also control the arpeggiators. In the third page you can set up the chorus and analog delay effects which add a real depth and interest to the sounds. 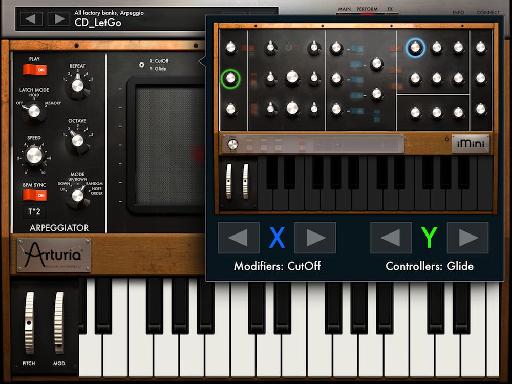 Assigning the X/Y pads to controls is really easy with drag and tap. 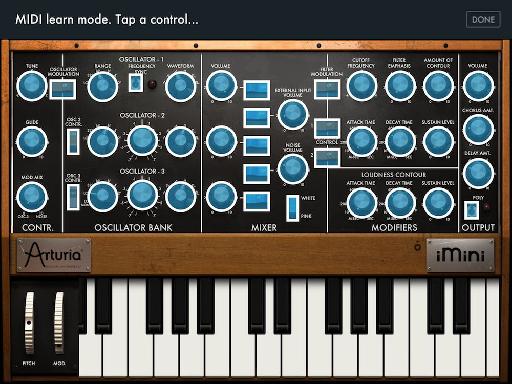 There's full MIDI in and MIDI learn, with a familiar tap-to-assign system.

So far, iMini is a really accomplished synth for iOS. But there's more to it than just that. Click the Connect button and you reveal more possibilities. It's WIST compatible, so it can sync up with other apps over BlueTooth. There's full MIDI learn, so a connected MIDI device can be mapped to its controls, and a fantastically simple tap-to-learn method is used to achieve this. The app is also Tabletop-ready, meaning it can integrate into the free Tabletop recording and sequencing environment, available separately from the App Store. Using it with Tabletop brings associated extra functionality like export to SoundCloud, render to WAV and Audiocopy, as iMini doesn't actually record anything itself. 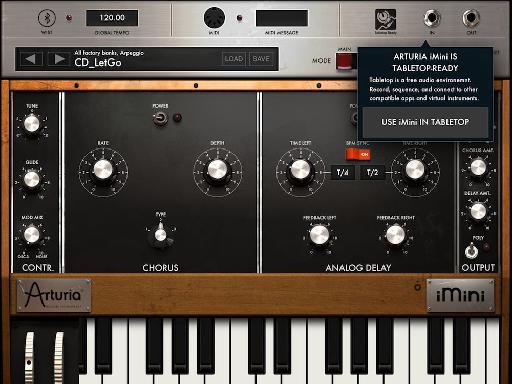 Connect with the free Tabletop app to integrate iMini into an iOS-based production environment.

You'd probably predict that Arturia's first full blown synth for iPad would be pretty good, and it is. It looks and sounds gorgeous, and is easily accessible for beginners while still feeling like a pro app. The control stuff is very well implemented too, with MIDI learn and the X/Y pads being particularly handy. Throw in preset exchange with the desktop app, WIST and integration with Tabletop and this is not only a great sounding synth but a real bargain, especially at the introductory price.

Find out more about iMini here.

BenB
Downloaded and played around with this last night. It is really awesome! I remember playing an actual Mini Moog when they were selling back in the 70's. This is an amazing reproduction. Thanks for posting this review!
lostinthesound
The price is certainly a bargain. Though it's still in its developmental infancy, I hope they'll enable a bit of control surface support similar to what Camel Audio has done with Alchemy (i.e. iPad Alchemy can control parameters on DAW Alchemy via WiFi). To me, that addition alone would make this lovely little synth really take off.