With its latest compressors, Arturia has come up with excellent recreations of some true classics. Joe Albano found they really were mix tools that he would actually use...

Arturia is primarily known for their excellent emulations of classic synths and keyboards and their hardware keys and interfaces, but they also offer various models of outboard studio gear, including several preamps and filters “You’ll Actually Use”—their latest product adds 3 Compressors You’ll Actually Use to this product line. 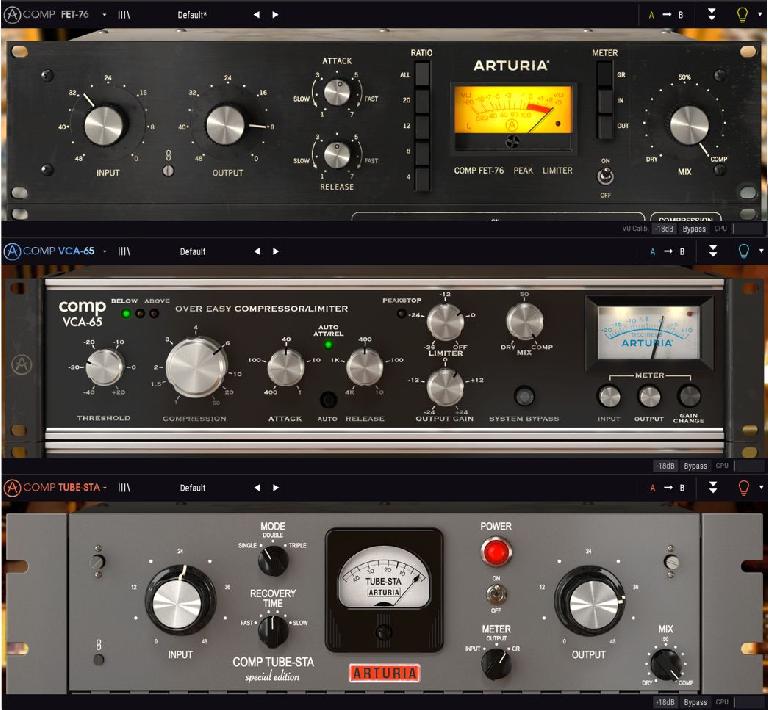 The 3 Compressors are available separately or as a bundle, in all the usual formats—AAX, AU, and VST2/3. Arturia has modeled three classic analog compressors, each known for its distinctive compression circuitry, but with a slight twist. The first two are models of the Urei 1176 FET compressor and the dbx 165 VCA compressor—both famous for their specific sound and response.

You might expect that the third model would be the remaining member of that familiar triumvirate of classic comps, the Teletronix LA-2A, but that’s where Arturia has pulled a switch—the third compressor is instead a model of the Sta-Level, a tube compressor that may be somewhat less familiar to many engineers and producers. The Sta-Level bears a clear resemblance to the LA-2A—both being tube designs—but its internal circuitry is quite different. Together, these three emulations offer a useful range of compression sounds and responses. Let’s take a look at Arturia’s take on these classic models.

The 3 Compressors all include photo-realistic front panels that for most part duplicate the control sets of the original hardware units, with the occasional extra control. Upper and lower toolbars provide a preset browser at the top, and options to calibrate the VU meter at the bottom. A drop-down panel adds a set of additional features—these include the choice of internal or external sidechain control, along with sidechain filters and EQ, and in stereo instances there are detection mode options that include MS operation. 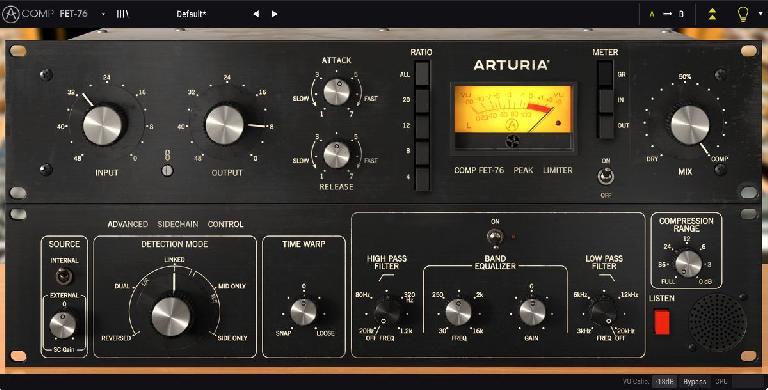 The additional controls in the 3 Compressors’ drop-down panels

The 1176 and 165 models also include a control labelled Time Warp, which sets an optional look-ahead time, and a Compression Range setting that allows the user to limit the maximum amount of gain reduction. Most of these lower-panel controls add features not available on the original units, for an extra bonus over the basic features of the emulations. All the modeling was done via Arturia’s TAE—True Analog Emulation—technology, for what Arturia proudly describes as “spot-on” emulations of the original hardware—anyone familiar with their models of classic synthesizers can attest to the effectiveness of this tech.

The hardware unit is a transistorized design that utilizes FET—Field-Effect Transistor—circuitry, which provides for fast, aggressive compression. The plug-in—like all of the 3 Compressors—is faithful to the original layout, with Input and Output knobs, and fast-acting Attack and Release controls that are clearly marked to indicate that—just like the original’s—they operate backwards compared to most attack and release knobs. The attack and release times are true to the original’s, with attacks as fast as 0.2 milliseconds (2 microseconds).

The four Ratio options—4, 8, 12, and 20:1—are available via pushbuttons; the original’s famous “all-buttons mode”—a more aggressive response especially good on drums, achieved by pressing all the Ratio buttons in together—is available here as a separate “All” button at the top. To augment the original control set, a Mix knob at the far right enables parallel compression right within the plug-in—a very welcome extra feature, especially when using the FET-76 on drums, one of the classic applications for FET compressors.

The Comp FET-76 on drums (in all-buttons mode): bypassed; then compressed

The 165 was the successor to dbx’s original 160, adding the company’s patented Over-Easy soft knee response. Its fast, tight response made the original good for almost any application—drums, vocals, and especially instruments in need of tight control, like bass.

Again, this model follows the original’s control set, with Threshold, a wide-ranging Ratio knob (labelled Compression), and Attack and Release controls, including an Auto switch that enables program-dependent automatic attack and release times—a key aspect of the original’s performance. There’s also an additional hard limiter, with its own threshold control. Output (makeup) Gain, a VU meter, and the same extra Mix knob—which is available on all of the 3 Compressor models—round out the front panel.

The Comp Tube-STA is the outlier of the collection. Most companies provide a model of the Teletronix LA-2A to fill in this slot, but Arturia has opted to instead emulate the Sta-Level tube compressor. While the original Gates Sta-Level had a very simple layout, a reissue from Retro Instruments updated that with additional control options, and Arturia has included those options in the Tube-STA. 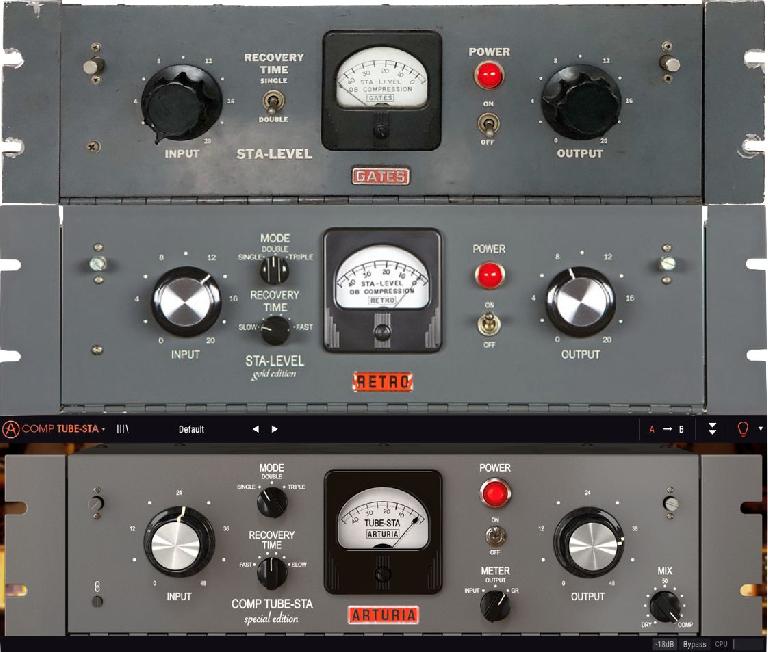 As I mentioned above, while the layout and tube design of this compressor may be similar to the LA-2A, internally the compression circuitry is altogether different. As opposed to the LA-2A’s optical compression, the Sta-Level utilizes a variable-mu tube, a tube with adjustable bias which controls the gain reduction. This is the same method used in the venerable Fairchild 660/670 compressor, and the Sta-Level actually has more in common with that classic unit.

The two main controls are the Input and Output controls, which set the overall amount of compression and output gain, respectively. Increasing Input adds compression by pushing the signal level into a fixed threshold—since this brings the overall level up, the Output knob then needs to be dialed down to compensate. There’s a Link switch at the lower left that reverse-links their movement, a nice convenience (Link is also available with the FET-76’s Input and Output knobs). Link mode only works when turning the Input knob—you can offset the relative position of the Output setting by moving the Output knob; this kind of welcome attention to detail is found throughout the 3 Compressors bundle.

The original Gates Sta-Level offered only a single additional control labelled Recovery Time, with Single and Double options; the reissue Retro Instruments unit re-labelled this just “Mode”, adding a Triple setting, and implemented a separate Recovery Time control, ranging from Slow to Fast. Arturia has modeled these enhanced controls in the Tube-STA, and these settings are key to getting the most out of the compressor.

The Mode knob affects both attack and release, with program-dependent response: Single Mode provides the slowest response, preserving the most transient punch—this might be a good choice to emulate the slower attack of the LA-2A; Double Mode apparently is the closest to the original unit’s response; Triple Mode provides a faster attack—according to Arturia this offers behavior similar to the Fairchild. The Recovery Time knob allows for further adjustment of the release. Despite the Fast->Slow labelling, the times actually range from slow to slower—approximately 2 seconds up to 8 seconds—and are affected by the Mode setting.

The sound of the original Sta-Level has been described as warm, thick, and velvety, and a little experimentation with the Mode and Recovery settings should provide a useful variety of responses, making the Tube-STA a welcome alternative to the more familiar tube compressor models typically available.

The Comp Tube-STA on a vocal: bypassed; then compressed

As it turns out, Arturia’s 3 Compressors really are compressors I would actually use—though I have numerous emulations of the Urei and dbx models, I found that I preferred the Arturia emulations in many cases. And I could easily see the Tube STA model becoming a go-to compressor for vocals, where it tamed some problem tracks with a smooth, warm sound that I found very appealing. Even if you also have a bunch of vintage compressor plug-ins already installed, these 3 Compressors—especially the Tube-STA—are still worth a serious look.