Apple's 2018 iPad Pro lineup is the biggest thing to happen to the iPad, well... ever. As fast as MacBook Pros, with USB C, Face ID and bigger screens, could they be the perfect musician's companion?

Like many of you, I was most interested to see what Apple was going to drop on us at their October event in NY this year. The rumors pointed towards an iPad refresh with USB-C finally added in lieu of the proprietary Lightning connection. I got my hands on one at launch and flew home as fast as I could to put it through the paces and see if this is finally the ‘must-have’ tablet for musicians.

Obviously, one of the biggest developments in terms of musician usability is the USB-C port now included instead of Lightning. For years, we’ve all been plagued with proprietary cables in order to get pro audio gear working with iOS devices, and I was incredibly anxious to test out the iPad Pro with a litany of gear laying around my studio to see if USB-C made any difference.

I’m happy to report that the new iPad Pro is an absolute leap forward in terms of connectivity to music and audio devices. While some of these worked before when using the iOS camera kit, there are quite a few controllers and interfaces out there that require power from the device that the camera kit just can’t provide. It’s ironic, but by removing the headphone jack and dooming some consumers to dongles for simpler devices, Apple has eliminated dongles like the camera kit for pro users. 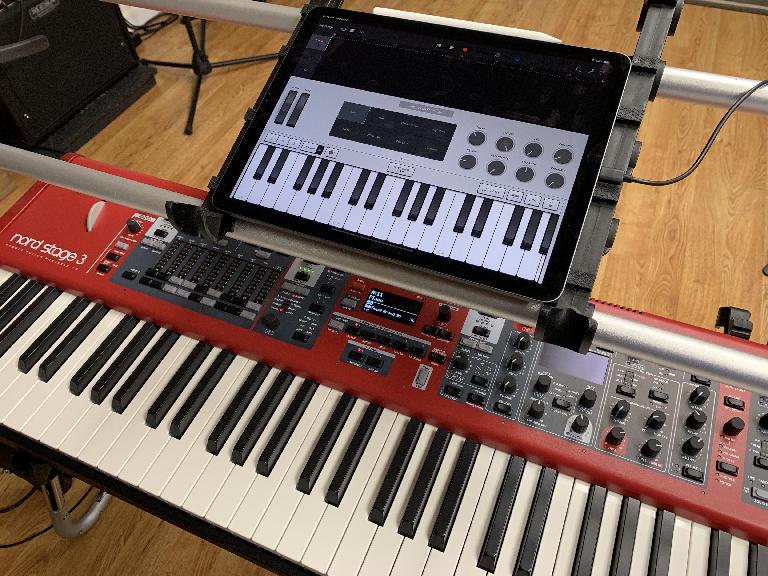 No more cable conversion needed! Standard USB type C cables will connect just about any standard audio or MIDI interface to your iPad. If it works without drivers on your computer, it will likely do so on your iPad. I hooked up the new iPad to a number of devices that used proprietary cables for iOS/lightning, and I’m happy to report that they work perfectly now with stock USB C to A cables. My Nord Keyboard, Korg Kronos, Arturia Keylab, IK Stomp IO, and more all worked perfectly with a single cable - just like they should.

The maximum onboard storage also took a massive jump to 1 Terabyte - although at a pretty massive dent to your wallet. That being said, for the modern musician who often has to film, edit, and produce their own live musical performances; 1TB is a realistic size that allows you to import directly from a camera (hey, thanks for the USB-C port!) and actually work on large 4K video and multitrack audio. Doing that on my ‘old’ 256GB iPad felt like a constant juggling act with available space (especially considering 256GB is the size of only ONE of my camera’s memory cards). 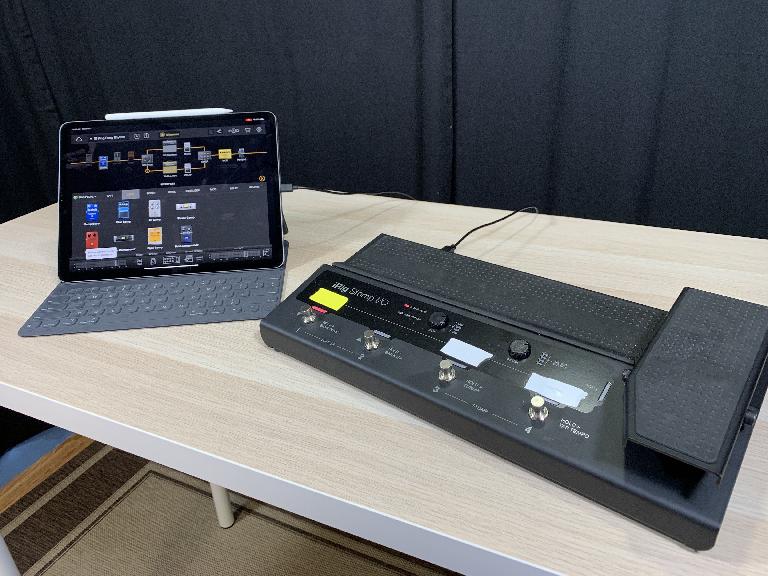 With the onboard storage bump came a performance bump as well, and the early benchmarks are stating comparable performance to current MacBook Pro machines. The A12X Bionic chip is absolutely smoking other tablets, and absolutely puts it firmly beside the entry level and 2nd tier 2018 MacBook Pro in terms of raw computing power. Of course, these are benchmarks only - it remained to be seen how this translated into real world app performance.

I quickly shot a video in 4K with my Canon 5D Mark IV and my iPhone, and I connected the camera to my iPad directly. I imported the footage into Adobe Rush and… wow. Just, wow! ’Snappy’ doesn’t even describe it. Of course, the iOS fledgeling video app doesn’t have even a tenth of the features of my trusty Final Cut Pro X, but I have to say - cutting together video on this thing feels like the ‘minority report’ tech-infused future that we’ve seen only in the movies. It’s just so…damn…fast. For a solid 60% of my projects that don’t require massive multi camera sync or other technical feats, this is absolutely going to be my ‘main machine’ from now on. It just saves so much time, and I can have it with me literally anywhere. If I can edit for 20 minutes while waiting for my kid’s hockey game to start, that’s 20 extra minutes I get to actually spend with my family when I finally get home. For folks like me who always have projects ‘in the queue’, this thing is going to really change up your workflow. 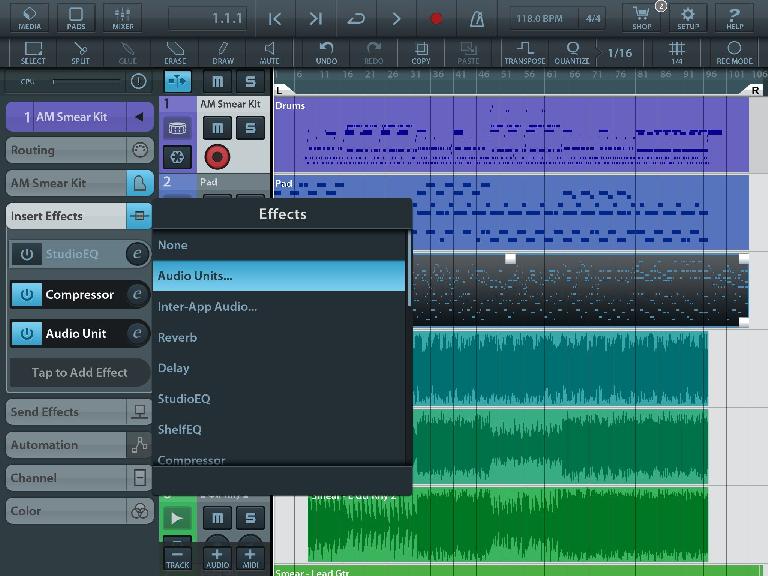 Online reports have noted that the 1TB model has an extra 2GB of RAM and while I certainly believe that, I didn’t really notice it. I had a 12.9” 1TB model to compare to an 11” 256GB model and I didn’t really notice any difference in horsepower when editing. The 1TB of onboard storage is certainly a big chunk of cash to plunk down, but the speed of that SSD is truly staggering. Apps are beyond snappy, they just feel fluid and connected to your hands. After spending a good chunk of time absolutely tearing through GarageBand with no lag whatsoever, I’m really frothing at the mouth for Logic iOS.

Where To Go From Here

I suppose now all we have to do is wait for the pro apps to land. Sure, there are a lot of alternative DAWs that work just fine on iPad, and I’m sure the extra juice in the CPU department will let them flourish - but I want Logic. I want Pro Tools. I want them on the iPad, and now that I have this device in my hands that is powerful enough to run them, I want them right fricken now.

MainStage would be another big one. Imagine showing up to a gig not really caring what keyboard they gave you or what amp you got ‘backlined’. You’ve got an iPad in your guitar case that can deliver every bit as much power as the MacBook Pros that run entire tours. If you’ve been dabbling in audio, video, and media production on the iOS platform, this device will let you do that at lightning speed. Once the majority of pro apps that already exist are updated to take advantage of the raw power, I think we’re going to see the iPad Pro powering a lot of professional rigs down the road.

Cons: The price for the upper tier is pretty painful, but this thing rivals a MacBook Pro in terms of horsepower. The pro apps that are already available for iOS will work better, but now that we have all this power, it’s *really* going to make you long for Logic iOS or Pro Tools iOS. The headphone jack is, you guessed it, a thing of the past. We all knew that was coming.

Learn more about making music on the move: https://ask.audio/academy?nleloc=new-releases

Wilizm
"I want them right fricken now", I definitely agree with that.
Paul
Overpriced, and crippled by an OS that fundamentally isnâ€™t designed for creators or professionals. Look Iâ€™ve only got an Air 2 but it runs the same iOS. So apart from processing power, itâ€™s as â€œproâ€ as a Pro. I *still* havenâ€™t found a consistent or easy way to do something so simple as download a WAV from freesound and use that file in a sampler. Not without jumping through hoops and using intermediary apps and creating redundant duplicate copies of the same file. Yes fhere are some amazing apps out there, but I feel like theyâ€™re good in spite of iOS. Not because of it. Ultimately everything is harder than on a desktop/laptop. From app switching to file management; basic stuff weâ€™ve had figured out for decades now. For top tier iPad Pro money you could get a PC laptop thatâ€™ll last you years, an audio interface, controller keyboard and full featured DAW of your choice. When this iPad dies Iâ€™m out I think. Iâ€™ll miss it for toilet Netflix though,
Enkerli
Sounds like software limitations are a big issue. Logic/MainStage would be huge. And while AUv3 plugins are gaining traction, we could use a lot more of them.
The software issue is also about the OS. Imagine if you could plug in an external drive and access samples directly, for instance? One can hope the next major version of iOS will bring support for all sorts of useful things but itâ€™s probably best to wait until that happens. Apple has been known to be slower than people would like, with these types of updates. Probably for good reason, as stability is essential. But it still impacts purchase decisions since itâ€™s better to buy gear for the existing setup than to â€œinvestâ€ in an expensive device in the hopes that maybe itâ€™ll suddenly get all the features you want through software.
TLMuse
I would have appreciated comparisons of 11 inch vs 12.9 inch for reading music (e.g., using forScore). Is 11 inch good enough for music stand use?