The Pointer Sisters sang, “I’m so excited, I just can’t hide it.”
Well, so am I! Why? Because Apogee has released its DualPath FX Rack.

While most DAWs these days come with a perfectly decent set of FX plug-ins, many of us turn to third party stuff for that little extra improvement we hear to the sound and we want to able to either trackrecording them as part of the sound or monitoring through them without the noticeable added latency that comes with employing for example a Universal Audio Accelerator.

The option has been to buy a Universal Audio audio interface to track through their Console app with no added latency plus the advantage of offloading some of the CPU to DSP. And they are a fine choice, but for me personally, I preferred the Apogee converters, mic pres and audio driver efficiency, so I bought an Element 24. In fact I recorded my pop album “Honestly” vocals through it with no boutique mic pre. But because I have a UAD Accelerator, I had to wait until the mix stage to add those plug-ins.

Another option is to use the same plug-ins with versions from a respected company like Waves, but then the CPU usage is all in your DAW and you are only monitoring through them and not tracking through them unless you set it up that way in your DAW.

The unique feature of the Apogee FX Rack is that the plug-ins are “DualPath.” You can load them into the Apogee Control panel and they use the built-in DSP of your Apogee audio interface or load them directly in your DAW and there is no added latency. With Apogee’s integration with Logic Pro X with Direct Monitoring, you can totally control the plug-ins from within Logic Pro X while they are offloaded to the Apogee DSP. Again, with no added latency.

Which Plug-Ins Are Included?

The ModEQ 6 is a 6 band Parametric EQ that features LoPass,Hi Pass, 2 Peak/Shelf and 2 Peak/Notch bands, each of which you can solo. Like Logic Pro’s Channel EQ is has a Spectrum Analyzer 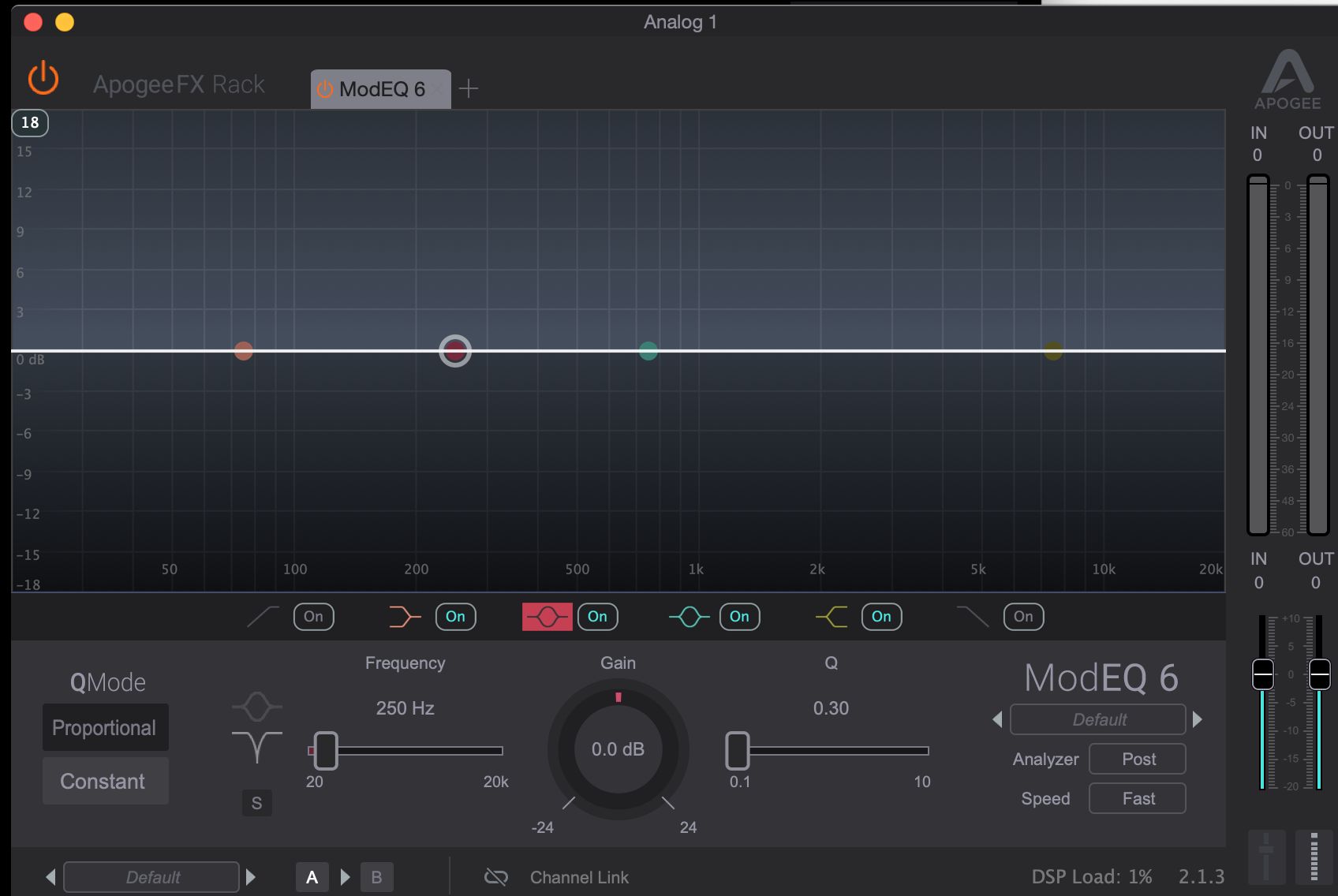 Next up is a ModComp compressor with Auto Makeup, Dry/FX mix, a 2 band Sidechain EQ, and  3 user selectable styles: Punch, Easy, and Level. 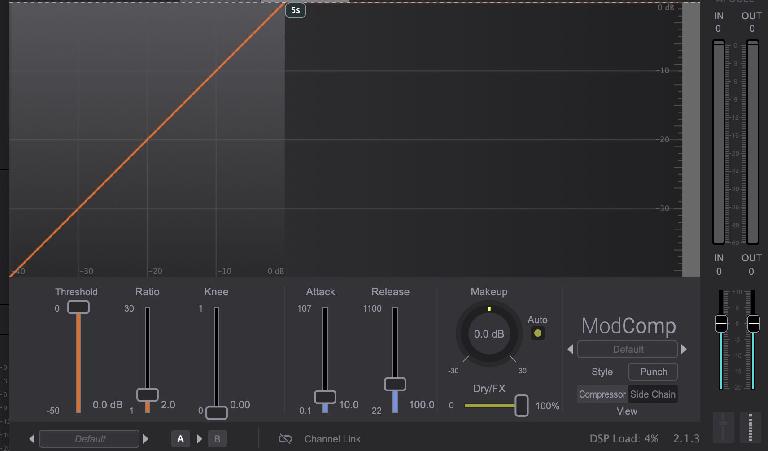 The Opto-3A is clearly an LA-3A emulation and a great sounding one. 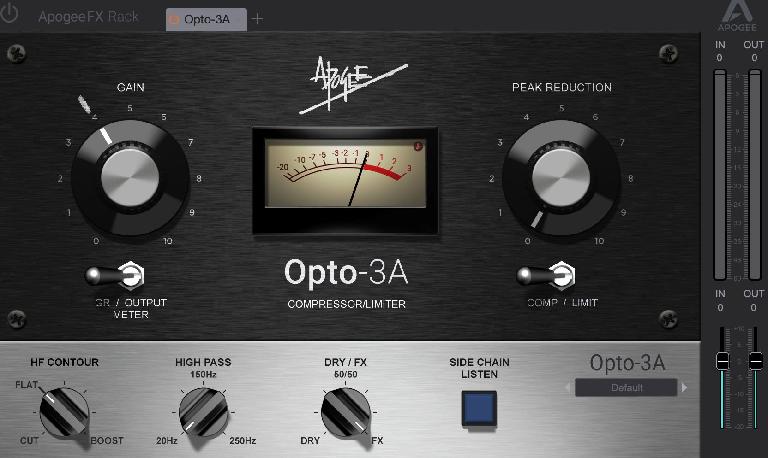 But the big draw is probably going to be the Pultec emulations, which were jointly developed by Apogee and Pulse Techniques, the current manufacturer of Pultec hardware. The Pultecs are legendary hardware of course, but crazy expensive. There are other emulations of them, but the advantages of the DualPath are compelling.

The EQP-1A Program E and MEQ-5 Mid-range EQ are now available as DualPath, and Native. 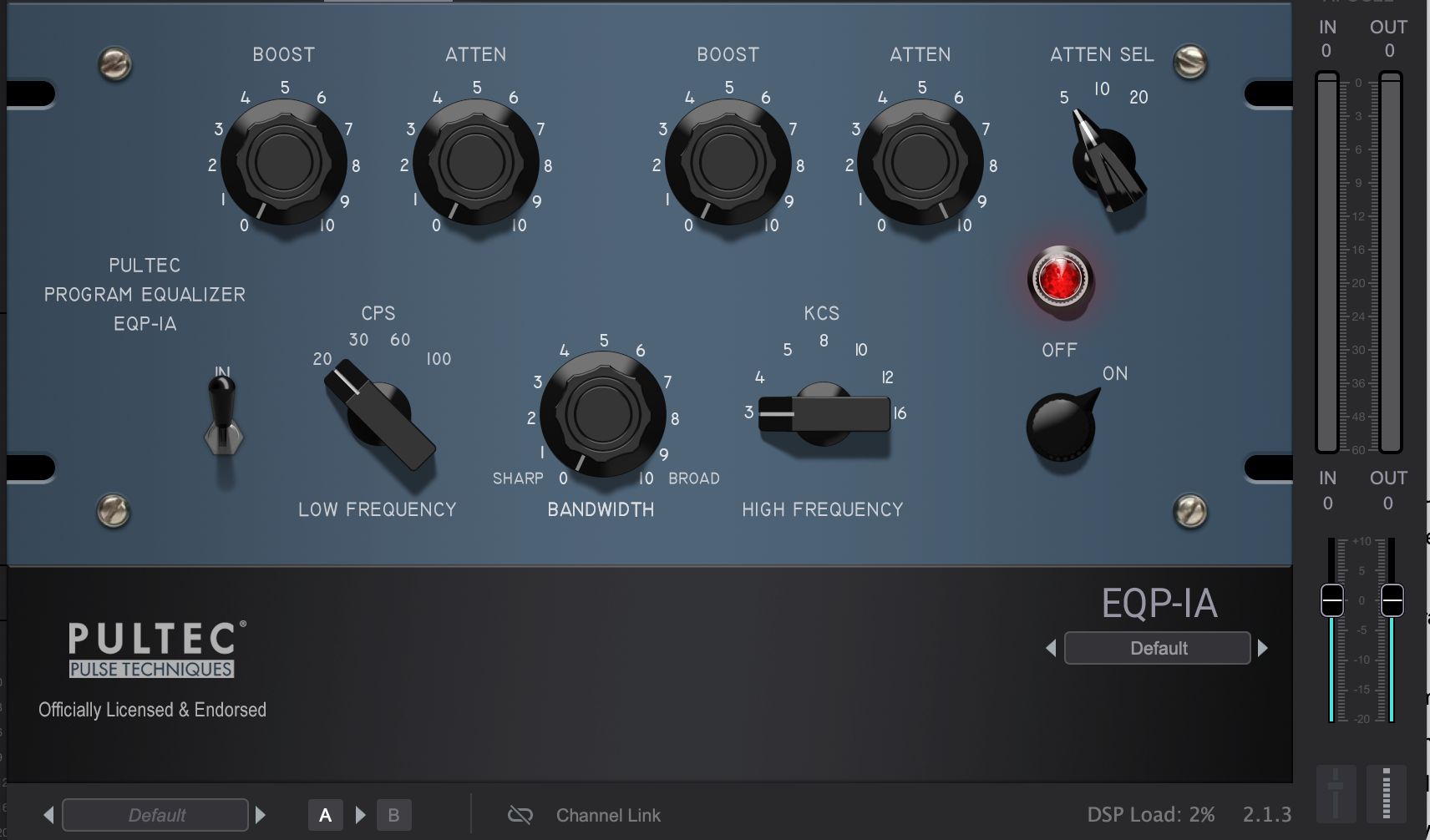 With the DualPath Monitoring mode, with any DAW once you instantiate the plug-ins in the Apogee Control panel, you can control everything - plug-in settings, levels, mic-pre gain, etc. from within the DAW. You don’t even need to look at the Apogee Control panel at that point, just the FX Rack plug-in in your DAW. And no need to print the FX, unless you want to and set it up in your Apogee Control to do so.

If you are a Logic Pro X user though it is especially a great workflow. In Direct Monitoring Mode, you can have really low latency. Monitor through the FX Rack and set your pan and volume levels for direct monitoring recording. You can even record your vocal monitoring with the FX Rack plug-ins and simultaneously record an electric guitar monitoring through Logic’s Amp Designer or other guitar amp simulation. Alternatively, without Direct Monitoring engaged, in Software Monitoring Mode you can record with the FX Rack plug-ins as part of the recording. You will though then hear a bit more latency as it then depends on your audio buffer size.

Playback Mode allows you to set different pan and volume settings for playback separate from record volume. Personally, I don’t envision ever turning off the Direct Monitoring. It’s just so great to monitor through a terrific compressor and EQ while sending to a reverb from within Logic Pro X.

You can also control all this through the free Logic Remote app on your iPad or iPhone. Awesome!

How Do They Sound?

I compared three different version of the Pultec EQP-1A: the UAD, the Logic Pro Tube EQ, and the Apogee FX Rack version.  I matched the settings and gain as close as possible. 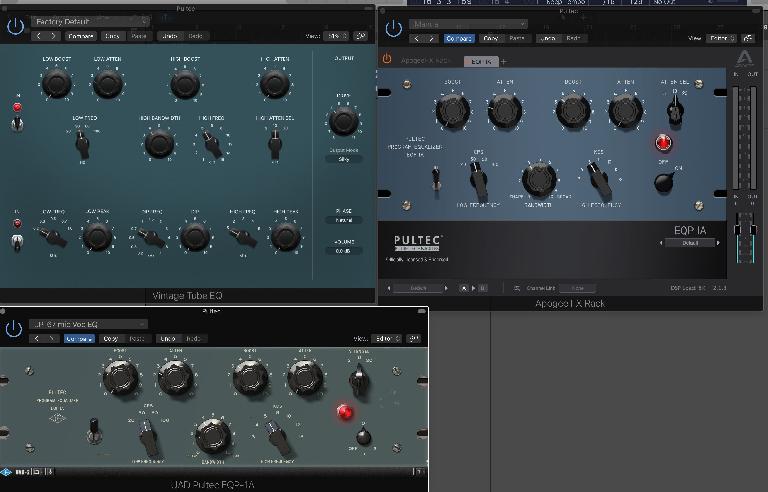 I am not going to lie, the quality of the sound of all three was close. For me the Apogee FX Rack version was a little smoother than the other two, but close. I would rank them FX Rack #1, UAD, #2, and Logic Pro X #3.

The big advantages for me to use the Apogee FX Rack over the UAD is the lower latency monitoring while recording and the fact that it uses the Element 24’s DSP, freezing up some CPU drain on my UAD Accelerator, because I use a lot of UAD plug-ins. The same is true for the Opto-3A, which will allow me to not use the UAD LA-3A.

Fortunately though, you needn’t take my word for their quality. You can download  a demo version and try it for yourself. Be aware though, you need to run a fairly recent version of the Mac OS and it does not work with Windows at all. Also, you need a Pace iLok account, although a physical iLok is not required.

How Much Do They Cost?

If you don’t own an Apogee Thunderbolt interface, you can purchase the plug-ins individually or as a bundle. The ModEQ 6 and ModComp are $149 each. The EQP-1A and MEQ-5 are $199 each. You can buy the two Pultecs as a bundle for $299.The whole shooting match can be purchased for $499.

There are several ongoing promotions for purchasers of the Thunderbolt interfaces. Check them out on the website as they are for a limited time.