Language
Recording, mixing or mastering? Want to highlight the vocals or get your instruments to pop through the mix? An aural exciter like the Aphex Exciter might be what you need. Joe Albano checks it out.

Back in 1975, Aphex came out with a hardware box that promised to improve the sound of recordings, adding presence and brightness that couldn’t be achieved with simple EQ. Initially they rented out the device to studios (at $30 per recorded minute!), where, despite initial skepticism, it lived up to that promise, and became a popular effect. Eventually, the unit was offered for sale, and became a studio staple.

... and the current Aphex Exciter (including Big Bottom).

Cut to the present—the Aphex Exciter model on review here is the current incarnation of that device, coupled with another Aphex processor, Big Bottom, which enhances the low end. The two processes complement each other, and even with all the virtual processing options around (including other exciters and similar tools), this hardware Exciter is still popular in studios, broadcast facilities, clubs, live DJ & concert venues, and churches, where it enhances music with subtle sparkle and oomph, and helps dialog with increased clarity and intelligibility.

This year’s model combines the patented Aphex Exciter processing, which adds brightness and clarity to the highs, with Big Bottom, which adds punch and fatness to the lows. Unlike EQ, the Aphex processes won’t add level to the signal. The Exciter circuit works via a combination of phase manipulation and controlled harmonic generation, making it capable of adding sparkle even to signals lacking in highs (remember, EQ can’t boost what ain’t there). A little of this is blended in with the original signal, for a subtle increase in presence and clarity. Likewise, Big Bottom also blends its processed output lightly in with the original signal—in this case, an optical compressor is calibrated to dynamically enhance the low end, again, without the concurrent potential tubbiness and big level boost you’d get with EQ. 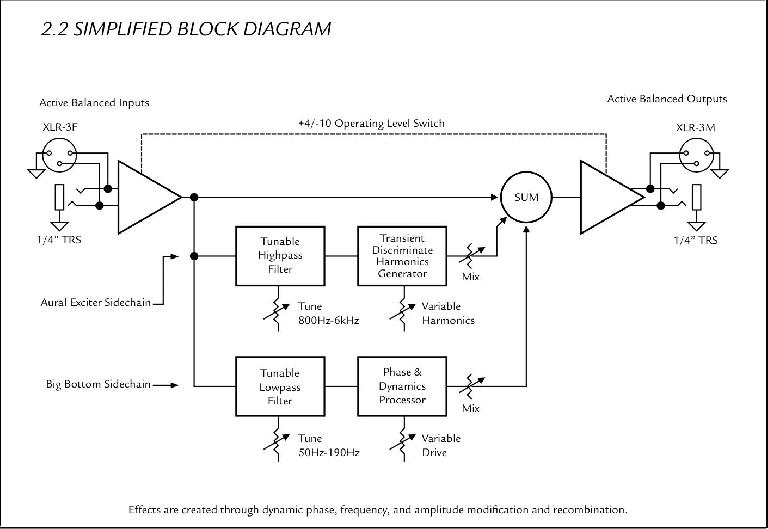 A (simplified) block diagram of the Aphex Exciter (courtesy of the owner’s manual).

The Exciter is a 2-channel, single-rackspace device, with rear-panel balanced XLR and 1/4” TRS ins & outs for each channel, along with a +4/-10 switch, to optimize levels for both pro/studio and DJ/project/hobbyist users.

There’s even a grounding lug, to combat any potential ground loop buzz or hum—a nice, professional touch you don’t often see much any more. The TRS connections can also be used unbalanced, but the 1/4” and XLR jacks should not be connected simultaneously (it will load down the signal).

Around the other side, the Exciter’s front panel consists of 12 knobs and 2 buttons. Each channel has its own independent Exciter and Big Bottom effects, and both effects can be bypassed per channel via the 2 buttons at the center of the panel. Each effect is controlled by 3 knobs—from left to right, for Big Bottom these are Drive, Frequency, and Amount, and for the Exciter, Frequency, Harmonics, and Amount.

Amount, in both cases, is a mix control—all the way left is the original (dry) signal only, all the way right is the processed signal only. Normally, you’d insert the Exciter inline, and dial up the ideal blend, or balance of effect against original signal with each Amount knob. But if you hook up either channel in a Send & Return configuration, then you’d want to turn the Amount controls all the way up, for processed signal only, and set the balance with the console’s (or DAW’s) Send controls. Each channel’s two effects can be used in tandem, or separately, by reducing the Amount to minimum for the effect not in use.

Besides setting the amount of enhancement you add in to the original signal with the Amount knob, you can fine-tune the Exciter effect as well. The Harmonics and Frequency knobs let you set the degree and range of the generated harmonics, respectively. The minimum position of the Harmonics knob is not off, it’s the “normal” setting for subtle enhancement, like you might want for acoustic sounds like voices, and complex signals like a full mix. For individual instruments, especially percussive ones, you could then advance the knob to taste. But remember, with both the Amount & Harmonics controls, a little goes a long way—too much of the effect can get harsh and edgy—subtlety is the order of the day.

The Frequency knob allows you to fine-tune the range where the harmonics are generated. It’s the corner (cutoff) frequency of a highpass filter that feeds the circuit, so the lower it’s set, the more midrange harmonics will be generated, in addition to high-frequency ones, adding more mid presence; at higher settings, the effect will  be concentrated mostly in the upper range, for more air and subtle sheen. Aphex’s newly-patented “Transient Discriminate Harmonics Generator” circuit discriminates between parts of the audio signal that would benefit from enhancement (i.e. high-level transients) and those that won’t (some high-level sustained tones), optimizing the effect for more natural sound, even on highly dynamic signals.

Big Bottom wants to be calibrated to the incoming signal level for the best results. This is done with the Drive knob, which works (likes a compressor Threshold) in conjunction with a small LED to its lower right. Starting at minimum, you advance the knob until the LED flashes on signal peaks, indicating that processing is happening. Basically, the circuit is providing parallel compression (via an optical compressor design), but it’s frequency-dependent compression, thanks to the Frequency knob next door. This is the corner (cutoff) frequency of a lowpass filter, which sets the range of the Big Bottom effect to act on frequencies up to a limit of 50 Hz to 200 Hz. Aphex considers the “universal” setting to be 12 o’clock, which corresponds to 80 Hz.

So how does this version of the Exciter sound? I tried it on acoustic guitar, where it added a nice sparkle to a somewhat darker, more midrangy instrument.

And I ran a full mix through it as well. With fairly subtle settings, the Exciter processing added a little welcome “air” to the mix, and Big Bottom provided some nice, subtle, extra thump and punch, without any excess boom or tubbiness—just the kind of tweaks people are often looking for to polish a mix, or gently enhance a Master.

Audio Example 2 The Exciter on a full mix (dry, then processed):

So this latest incarnation of a venerable studio processor is still offering its signature sound, to anyone in search of that extra subtle bit of enhancement—a mixer who wants to make certain tracks “pop” in the mix, a mastering guy looking for that final polish, a DJ who wants to pump up his sound without needing a subwoofer—the Exciter could be just the ticket to make tracks and mixes come alive. While there are other options, this is, after all, the original—the one that started the whole thing—and it’s definitely worth a look.

Pros: Can add subtle air and clarity, and nice thump and punch, over and above what you can do with EQ

Cons: May not seem as convenient as plug-ins for some studio DAW users