With its plethora of inputs and outputs, OSSC is well suited to serve as the center of a DAW-based studio. But there's much more to Antelope's latest high-end interface, as Joe Albano discovered.

The hits keep coming from Antelope Audio, the well-respected maker of ultra-high-end audio interfaces and studio gear. Their latest effort is the Orion Studio Synergy Core, a multichannel interface that blends Antelope’s audiophile-level sound quality with comprehensive i/o, onboard processing, and a generous selection of their latest and greatest modeled vintage processors. There’s a lot to cover in the Orion Studio Synergy Core—hereafter OSSC—so let’s get started.

When it comes to processing power, OSSC ups the ante considerably, combining a pair of Antelope’s proprietary Field Programmable Gate Array (FPGA) chips with no less than six ARM-based DSP processors. With all of this power, you should be able to run up to 256 instances of effects (at any sample rate) from Antelope’s library of modeled vintage and studio processors—50 are included in the box (see below).

OSSC is chock full of inputs and outputs. There are 12 analog inputs utilizing combo XLR/TRS jacks—the 4 on the front panel offer mic, line, or instrument connections, while the rear 8 are mic or line. All 12 include Antelope’s Class-A discrete ultra-linear mic preamps, but there’s an option for line inputs to bypass these for a straight-lime connection directly to the ADCs, for the cleanest possible signal path. The rear 8 also support mic modeling for users of Antelope’s Edge or Verge modeling microphones (again, see below).

On the analog output side, there are two independent stereo Monitor Outs (A and B), plus the two independent headphone jacks on the front, all with their own level and mute controls. 16 line-level analog outs are also available on standard D-SUB 25-pin connectors. The analog i/o is augmented by a pair of TRS insert jacks, a nice convenience for incorporating analog gear into the recording chain.

Digital i/o includes 16 channels of 24-bit ADAT i/o on standard lightpipe connectors (8@96k, 4@192k), plus S/PDIF in and out on the usual RCA jacks. Word clock i/o is implemented on BNC connectors, letting OSSC’s high-end clock be the master in larger setups. Finally, to the far left are the Thunderbolt 3 (USB-C) and USB2 jacks.

A bonus feature even allows the DC-coupled analog ins & outs to be used for CV/Gate signals (apparently with Ableton Live, via a Max for Live device pack)—I didn’t have the opportunity to check this out, but it might prove interesting to analog synth and Eurorack fans.

OSSC’s front panel offers a lot of adjustability with a minimum of controls. From left to right, there’s a power button, followed by the (first) 4 combo XLR/TRS jacks. A momentary Talkback button is next—Talkback can be independently routed to any or all of the two stereo Monitor Outs and two headphone jacks. At the far right are a pair of dedicated Reamp outputs—given that the signal from these is optimized (lower level and impedance) for being sent to an instrument amp, you’d want to reserve them for that use, as intended, and not try to press them into service as extra general-purpose line level outs.

Toward the center of the front panel is a big knob, which does double-duty as knob and button. The knob works in conjunction with the display to its right, and the six selection and Function buttons that surround the display. Via a combination of short and long button presses, the knob and the buttons lets you display and dial up many adjustments, ranging from individual Gain for the main and headphone outs, to basic system settings. But of course all of these settings can also be made via the Control Panel software, which also provides additional mixing and routing capabilities, along with access to the modeled effects.

The installation process for OSSC follows the same procedure as with all of Antelope’s interfaces. It’s not as straightforward as most, but if you follow the instructions in the manual and the online documentation carefully it’s easy enough. You have to first go to the Antelope website and download Antelope’s latest Universal Driver, and their Launcher utility. After installing these, open the Launcher panel and plug in OSSC—it should be detected. Then you have to update the firmware before the device can be used—this may take a few minutes with minimum feedback, but be patient and it’ll eventually finish. You’ll know it’s ready when you can click on the Launch Control Panel button, and the OSSC Control Panel software opens up. 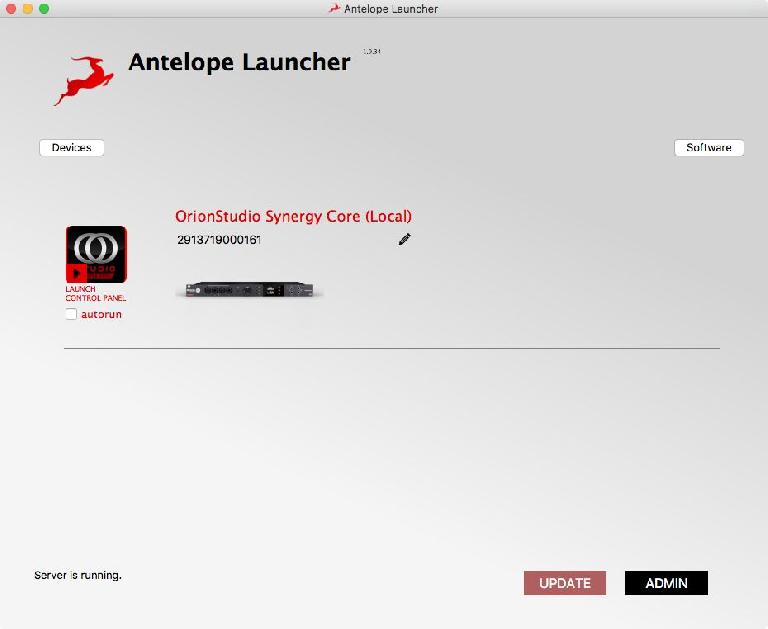 The OSSC Control Panel software provides access to all the same system settings as the front panel display, plus four panels—Routing, Mixer, Effects, and Meters. The Routing panel is a virtual patchbay, where you make all internal connections between input and outputs, the software monitor mixer(s), and the effects panels. 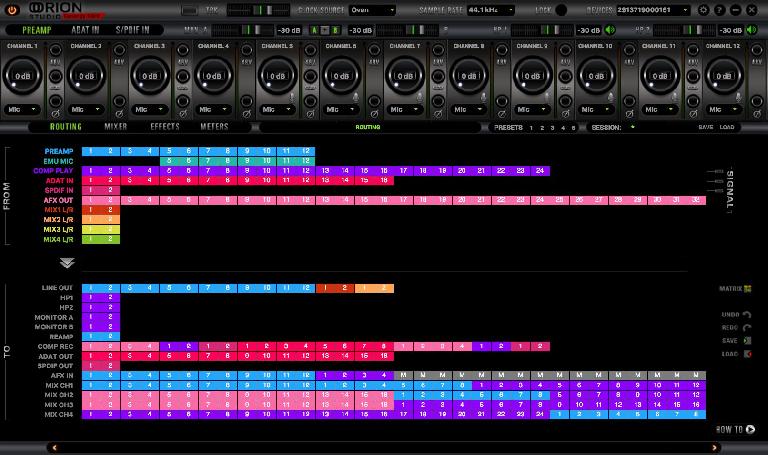 You just drag a channel from the FROM section to the desired destination in the TO section below—anyone who’s ever used a traditional studio patchbay will immediately feel at home.

OSSC includes a generous collection of Antelope’s modeled vintage and studio processors, as well as a good number of virtual guitar/bass amps and cabinets. With OSSC there are two ways to access these. As with all of Antelope’s interfaces, they can be patched in via the Control Panel’s AFX Effects panel—you can have 32 channels of up to 8 effects each, for a total of 256 instances in all. 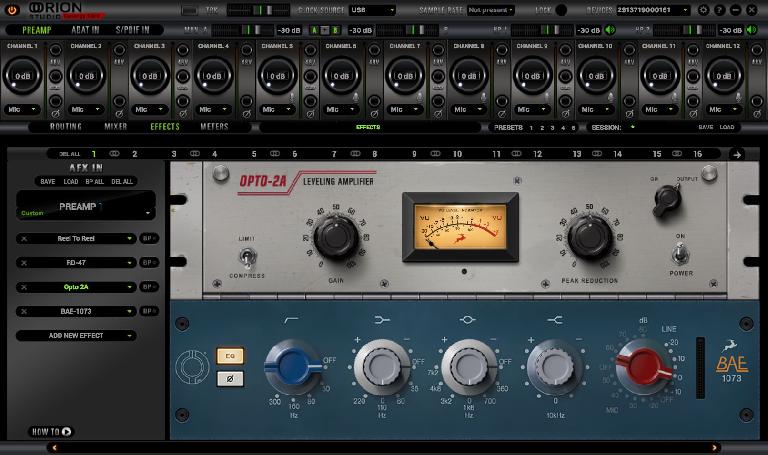 Depending on how you patch the effects in the Routing panel, you can run incoming audio through these effects—especially useful with the modeled vintage preamps—or to insert effects in a DAW channel for mixing you’d open up whatever kind of i/o plug-in that DAW provides and choose one of the 32 AFX channels, inserting the (up to) 8 effects you’ve added to that channel in the Effects panel. 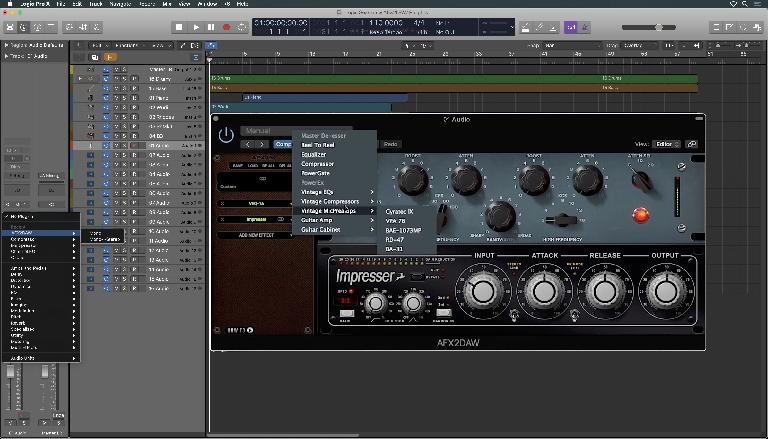 AFX2DAW is an add-on purchase, but I think the convenience it offers is worth the extra couple of hundred bucks. Currently the AFX2DAW software only runs over a Thunderbolt connection on Macs, though apparently a Windows version is in the works.

For those who’ve purchased one of Antelope’s modeling microphones—the SDC Verge or one of the LDC Edge models—inputs 5-12 support the modeling capabilities of those mics. All can emulate a wide range of various classic mics, and the Edge Duo and Quad models also allow for changing the pickup pattern after-the-fact, thanks to their dual-diaphragm design.

With its plethora of inputs and outputs, OSSC is well suited to serve as the center of a DAW-based studio—the extra main outs, inserts, and dedicated front-panel reamping outputs provide welcome flexibility without having to turn to an extra mixer, and the assignable TalkBack is a very handy inclusion. The combined FPGA/DSP processing power is considerable, and the bundled Antelope effects include most classic vintage analog processors and guitar amps/cabs—the optional AFX2DAW software makes their use even more convenient. And of course, OSSC provides the audiophile-level sound quality, high-end clocking, and low latency that Antelope is known for.

Like all of Antelope’s interfaces, Orion Studio Synergy Core is not inexpensive, but when you factor in the audio quality and feature set, it’s quite reasonable. Studio operators who need both top-quality audio plus comprehensive i/o and routing will find much to like, and the included effects are the icing on the cake—OSSC is an especially strong entry in Antelope’s line.

Cons: A bit pricey (though not unreasonable considering the specs/features)