Antelope Audio's latest flagship audio interface has some seriously heavyweight capabilities. Find out how Joe Albano got on when he put it to the test.

Antelope’s Orion 32+ | Gen 3 is the newest addition to Antelope’s stable of high-end interfaces. It’s a highly flexible 64/32-channel Thunderbolt/USB interface that incorporates a number of Antelope’s premium technologies. Let take a look at what’s on tap.

The Orion 32+ |Gen 3 can be connected via either its Thunderbolt or USB2 options. Up to 64 24-bit 192k channels can be streamed over Thunderbolt, while the channel count is limited to 32 over USB (as you’d expect). A USB cable is provided, but there’s no Thunderbolt cable in the box.

Orion promises vanishingly-low latencies, but Antelope do remind you that this is always dependent on the overall computer spec, so you’ll need to connect it via Thunderbolt to a powerful computer to get the advertised sub-millisecond round-trip latencies the unit is capable of.

The i/o is extensive: On the back panel you’ll find 32 channels of analog i/o on eight 25-pin D-SUB connectors. There’s also a balanced TRS stereo output that functions as the default monitor out (though all routing can be configured in the Control Panel, see below). Digital i/o is handled via 16 channels of ADAT connections, MADI in/out, and S/PDIF in/out.

For clocking (Antelope calls this its Acoustically Focused Clocking technology & jitter management algorithm), there are BNC connections for Word Clock input (1) and output (2), and a connection for Antelope’s own Atomic Clock. Antelope is known for their high-end clocking devices, and while The Orion 32+ | Gen 3 includes Antelope’s 4th-generation 64-bit clock circuitry, this connection allows discerning users to step up to their top-of-the-line standalone clock device.

On the front you’ll find a soft-touch power button, followed by three indicators that show the current clock source in operation—internal, external, or the aforementioned Atomic Clock. In the center is a display that shows the current Sample Rate, which can be set with Frequency up/down buttons just to the left; the display area also includes 32 small level meters.

To the right is the “Antelope button”, which calls up a front panel menu of options, including clock source, i/o trim settings, and SRC and S-MUX options. Settings can be adjusted with the Frequency buttons while the menu is showing. (Note—these settings are also available in the Control Panel software as well.) The front panel controls are rounded out by five setup Preset buttons.

I found installation a little tweaky, compared to some—it’s done via Antelope’s Launcher, whose documentation is not easily accessed. I had to flash the firmware and register the device to initialize it, but ultimately I got everything up and running, and Orion appeared in the interface menus for Logic and Pro Tools, where I successfully tested it with both DAWs. As it turns out, there is plenty of help available on the website via video tutorials if you poke around, but it would have been nice if a little more guidance was right there in the manual.

From the Launcher you can open the Control Panel, which provides very comprehensive routing capabilities, as well as access to the hardware-based effects that come with Orion. A settings panel provides access to the same options otherwise available from the front panel. The main Control Panel window has three tabs—Routing, Mixer, and Effects. 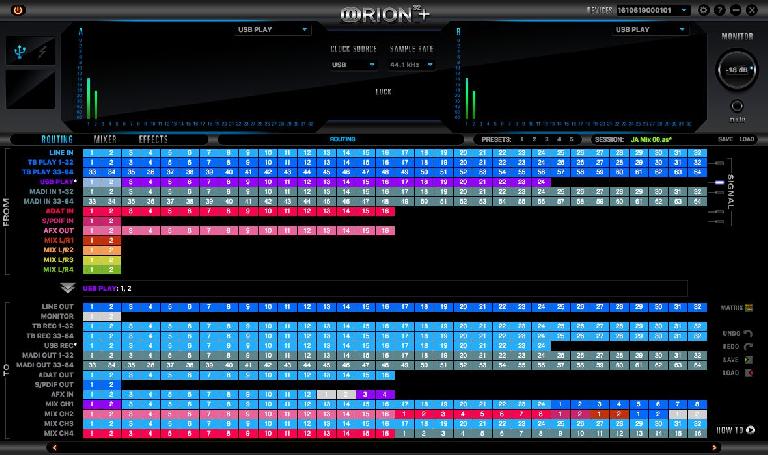 Routing provides an especially comprehensive set of routing options. There are two sections—From and To;  metering for all the channels in each is at the top of the window. These represent all the channels for input, output, and internal routing, including the analog, ADAT, and MADI i/o. Any channel in the From section can be routed to any channel in the To section simply by dragging—for example, to set the source for the two analog TRS monitor outs, you might have to drag either the TB (Thunderbolt) Play 1/2 or USB Play 1/2 channels in the top From section to Monitor 1/2 in the bottom To section. 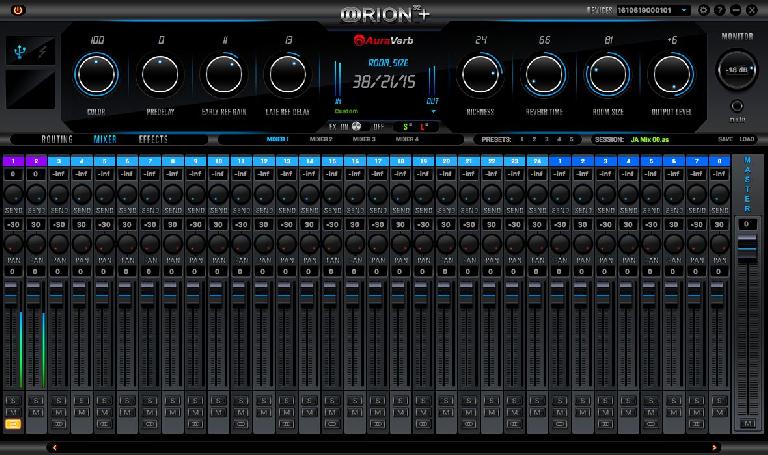 The channels in these also appear as To destinations in the Routing page, allowing the user to create (and save) their own custom configurations. The first mixer incorporates Antelope’s included on-board Auraverb algorithmic reverb processor, accessed via Send knobs.

The third panel is labeled Effects, and here you can access up to 16 channels of on-board effects. 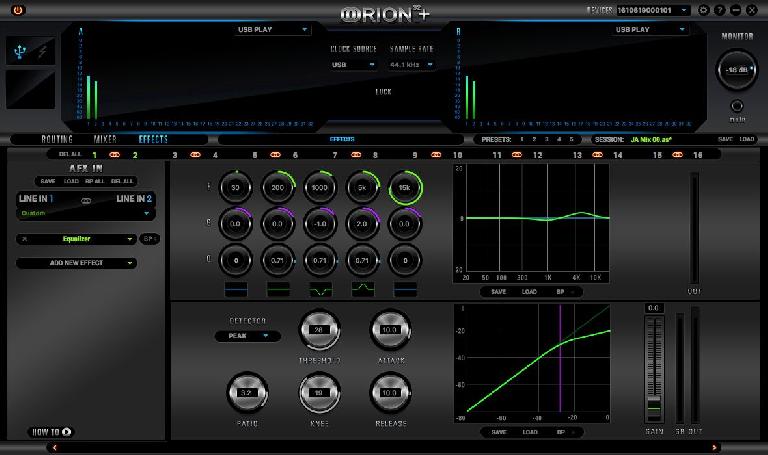 These also appear in the Routing page, and you implement them by routing channels there to an effect channel, and then to a record, mixer, or output channel. It works pretty much like a digital version of an analog patchbay, as opposed to the typical insert menu approach used in DAWs.

Besides the aforementioned Auraverb, Orion 32+ | Gen 3 comes with several additional effects—these include a 5-band parametric EQ; a Compressor with optional detector and knee settings; a flexible Expander and a dedicated Gate; and a Master De-Esser. Many more emulations of vintage hardware effects are also available as a separate purchase. 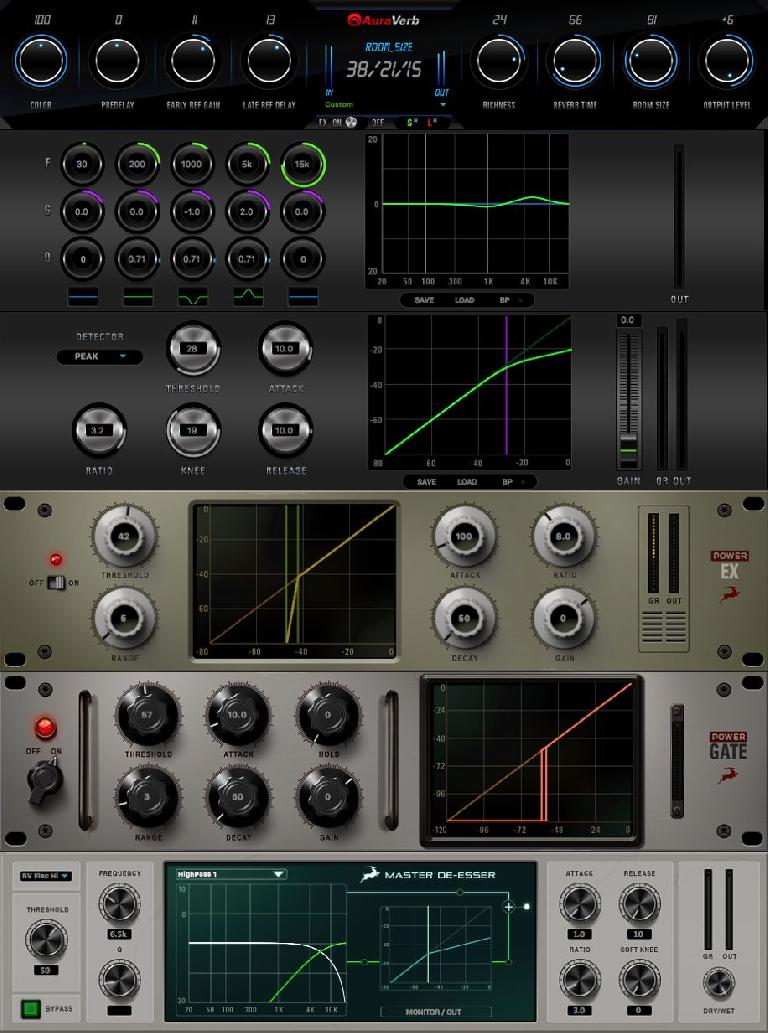 The bundled effects can be used while recording, if desired, printing the effected version even while routing the dry version to a separate channel in the DAW. If you wanted to use them in mixing, you would have to treat them like outboard hardware effects, routing audio out of the DAW through an i/o plug-in or the like (depending on the particular DAW), and patching in the effect in the Control Panel Routing page. Needless to say, this can be a bit more tweaky than you might like, but there is another option, though it requires an additional purchase.

For those users who might want to use Antelope’s effects—especially the add-on bundle of vintage emulations—more conveniently for mixing, Antelope offers the AFX2DAW software bridge (also a separate purchase). This allows the hardware-based plug-ins to appear as standard inserts in your DAW (much the same way that other hardware-based plug-ins from other companies do). With the software bridge you can use these plug-ins without putting any load on the computer’s CPU, and this would certainly be the preferred way of using them for mixing applications. (Note—currently, this option is only available via a Thunderbolt connection on Mac.)

The Orion 32+ | Gen 3 version of the AFX2DAW software should be available soon; along with the vintage emulations this should be a very welcome option for anyone using Orion, and I’d consider spending a few hundred extra on one of their Premium Upgrade plug-in packs (which include AFX2DAW) to be a no-brainer.

Like all of Antelope’s products, Orion 32+ | Gen 3 offers peerless sound quality, high-end clocking, and enough flexibility for just about any installation; the onboard effects (and the optional add-on vintage effects) are also a major bonus. While at its price point Orion is clearly not intended for the casual DAW user, for serious studio operators and hard-core audiophiles this interface is among the best around, and for anyone planning to step up it’s worth a serious look.

Cons: No included Thunderbolt cable; installation a little less straightforward than some