Antelope Audio''s Discrete 4 Synergy Core represents a more affordable way to get into the company's world of top-grade audio recording and DSP FX. Joe Albano put it to work.

Antelope is mostly known for its ultra-high-end clocking devices and top-of-the-line 64-channel studio interfaces, but the Discrete 4 Synergy Core interface on review here represents the other side of the coin, in both function and price point. The Discrete 4 Synergy Core—D4SC from now on—features more modest i/o at a more modest price than Antelope’s Orion range, which should make it attractive to smaller studios and producers, and its feature set is particularly well-suited for musical applications. But the D4SC is much more than just a little brother to the Orions, as we’ll see.

The D4SC is a half-rack box with 4 analog inputs and outputs plus stereo monitor out and 4 headphone jacks, expandable with another 8 channels of i/o via ADAT connections. It takes its “Discrete” name from Antelope’s discrete 6-transistor preamps, which are meant to provide “console-grade” quality, based on the company’s study of classic mic preamps. But despite its lower price point compared to the Orion range, the D4SC doesn’t skimp on quality, offering Antelope’s high-end AD/DA converters and clocking, and the usual extended dynamic range and flawless sound quality the company is known for.

Antelope’s interfaces all provide onboard hardware-powered virtual processing via their own FPGA engine, and the D4SC is no exception. But in addition to the FPGA engine, the D4SC also includes traditional DSP processing as well. This allows for compatibility with third-party virtual effects, like the Overloud modeled amps/cabinets included along with the other Antelope FPGA effects that come with the D4SC (more on the effects below).

There’s also an 8-channel unit available—the Discrete 8 Synergy Core—that doubles both the analog and ADAT i/o and offers additional extras, including a pumped-up 130dB dynamic range at the monitor outs. Since I have the D4SC here, that’s what I’ll be describing in this review..

The half-rack D4SC is a solid-feeling unit, with an elegant brushed-aluminum front panel.

On the far left you’ll find the first two analog inputs—combo XLR/TRS jacks that serve as mic/line/instrument inputs. On the right are no less than four headphone jacks—each can have its own low-latency headphone mix, set up in the D4SC’s software Control Panel (more on that below).

In the center is a display with three small buttons and a large knob. The top button displays output levels for the line out/monitor out and the headphone outs—pushing the button cycles between these, and they’re set with the big knob just to the right. The middle button toggles between the default display—four input level meters—and various settings (sync, sample rate, etc). The bottom button toggles between preamp gain settings, again set with the knob—a long click accesses additional utility settings. Note—all of these settings can also be made via the software Control Panel.

Around back you’ll find the remaining two analog inputs—they’re also XLR/TRS combo jacks, but these only function as mic or line inputs. There are four analog outputs, plus dedicated L/R Monitor outs, all TRS. A pair of BNC connectors provide Word Clock outputs. On the digital side, ADAT in/out lightpipe connections allow for 8 additional channels of i/o—ideally the master clock in that case would be the D4SC’s high-end internal clock, with Antelope’s signature “Acoustically Focused Clocking” technology, via the Word Clock outs). There’s a pair of RCA jacks for S/PDIF i/o. And in the center are Thunderbolt and USB2 jacks—obviously Thunderbolt is the preferred computer connection, offering the lowest latencies, with USB2 available for full compatibility with older computers.

Installation is handled by the Antelope Launcher—this installs the audio driver, updates the unit’s firmware, and provides software download links. During installation, it may occasionally pause momentarily, but just be patient, and when it’s done the interface will appear under the Devices button. 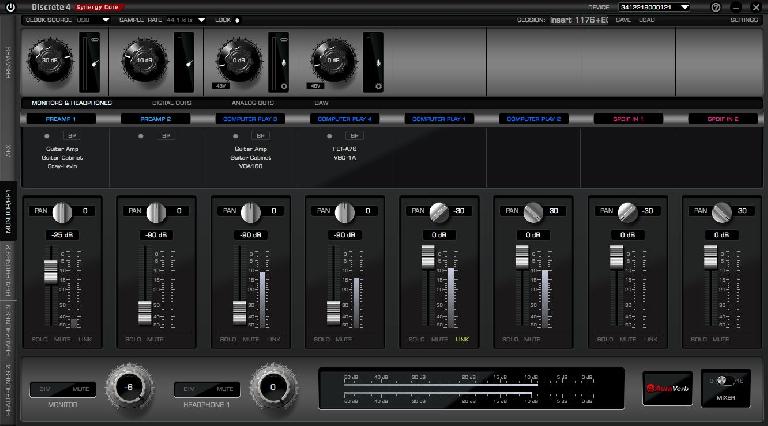 The Launcher is also where you can open the Control Panel software, which offers internal mixing and access to the onboard effects—the Control Panel can be set to launch automatically. At the top you’ll find the same settings available on the front panel, with additional settings available via the settings button at the upper right, including niceties like test oscillators for setup, and even Pan Law options—the kind of controls you’d expect from a high-end device.

Below that are four panels—Monitors & Headphones, Digital Outs, Analog Outs, and DAW. In Monitors & Headphones you can set up the four monitor mixes for the four headphone outs. Above each mixer channel you choose the source—one of the four inputs or one of the computer outputs. There’s a fader and pan for each channel, plus solo, mute, and channel link buttons.

Between the channel selector and fader sections is the AFX area, where you can insert the onboard effects. A click here opens a separate window, where you can instantiate the FPGA or DSP effects you want to use in that channel.

The D4SC comes with a number of Antelope’s FPGA effects, including several modeled vintage EQs and compressors, and a bevy of DSP-based modeled guitar amps and cabinets, courtesy of Overloud—36 in all. 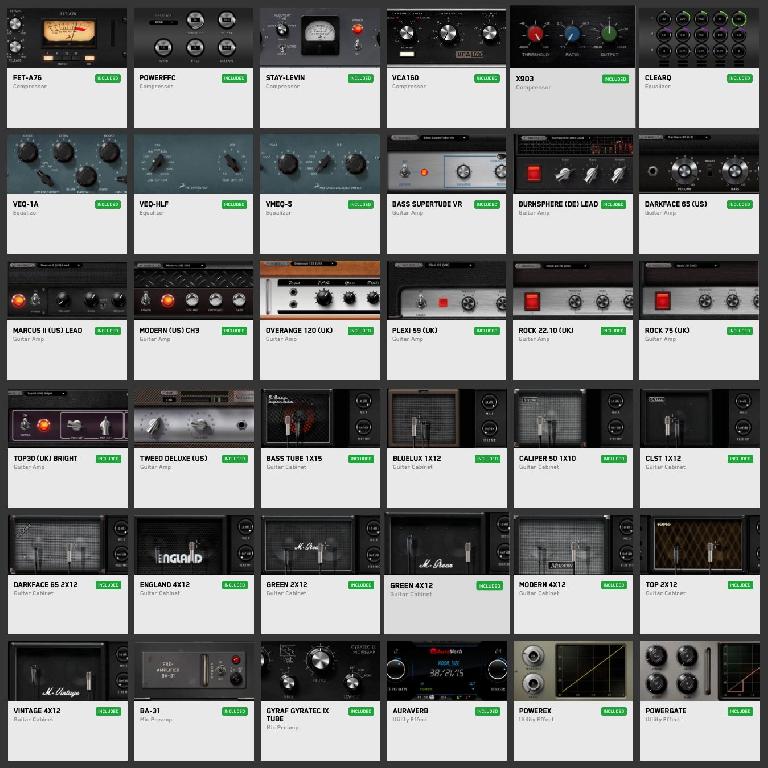 The inclusion of the DSP processing promises future availability of more third-party effects, for even greater processing expandability. The dual FPGA and DSP processing engines combine the advantages of each (latency, architecture, etc) for both optimal performance and flexibility.

As you’d expect, adding effects in a mixer channel assigned to an input channel will result in the effect being monitored and recorded in the DAW. But while it may not be immediately obvious, you can also insert effects in the DAW’s mixer channels as well, where they can be used on playback during mixing, just as if they were regular effect plugins.

The onboard effects can be patched in as insert effects in mixdown from both the Monitor mixer or the DAW mixer panels. You can have up to 4 FX channel strips with up to 8 instances per strip, for a total of 32 effects. To insert an effect channel in the D4SC Control Panel into a DAW mixer channel, you’d use whatever i/o plug-in or routing option that DAW provides. 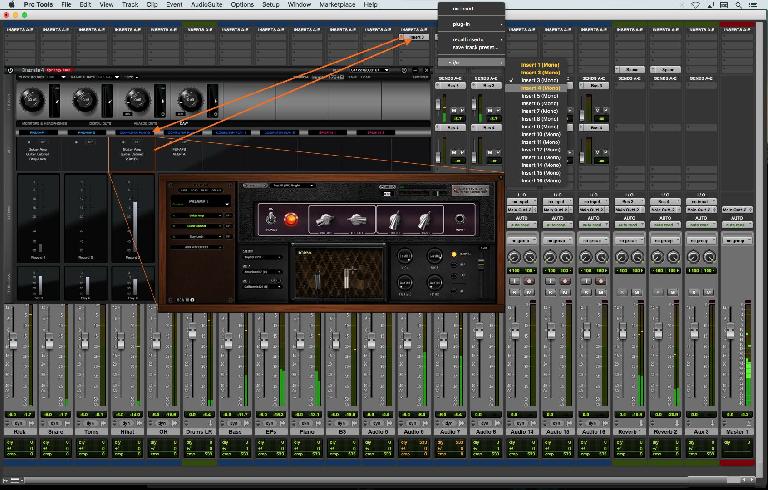 I set it up in both Pro Tools and Logic using those DAW’s i/o plug-in options, and it worked like a charm—just like using a regular plug-in insert, except that you have to have the D4SC Control Panel utility open to make the effect settings. You do have to remember to save your effect settings in the Control Panel—I’d recommend saving those files right into the DAW’s session/project folder, to make sure they stay with the associated session.

D4SC users who are connected to a Mac via Thunderbolt have another option—besides running the effects as described above, they can also use Antelope’s AFX2DAW bridge software (available as a separate purchase). This lets the onboard effects appear in standard plug-in windows in the DAW, for even more seamless integration. As I noted, currently this option is only available via Thunderbolt on Mac, but if that’s how your system is running, it may be worth a look.

With its flexible features, low-latency monitoring, and FPGA/DSP onboard effects, the Discrete 4 Synergy Core seems like a winner—while it’s not a budget unit by any means, it is competitively priced, providing an option for studios and producers on a more limited budget without sacrificing the sound and quality that Antelope is known for.

Learn everything you need to know about audio recording: https://ask.audio/academy?nleloc=new-releases