Language
Everyone knows the familiar sound of Auto-Tune used "creatively" on pop vocals. Love it or hate it, Auto-Tune can be used to correct music performances too. Hollin Jones checks out version 8.

One of the biggest technological advances in pro audio in the last decade and a half has been the increasing flexibility with which we are able to work with digital audio. Not so long ago, it was the case that you could muck about with MIDI until the cows came home, but your audio was pretty much what it was when you recorded it, unless you wanted to massively slow it down or speed it up in a sampler. That's no longer the case of course, and there are a fair few tools around that let you manipulate (often monophonic) audio with incredible precision.

Auto-tuning as a phenomenon now runs the gamut from minor correction of wobbly notes through changing vocal performances from a minor to major key after the session has finished, all the way to 'hard correcting' vocals for a synthetic, robotic kind of effect that is used in some styles of music. Whether you like this or think it's an affront to the very idea of good music, auto-tuning is everywhere.

Antares pioneered the process of auto-tuning and helped to bring it into the mainstream. Where once it was unavailable outside the biggest studios, now there's a version of it to suit most budgets. Auto-Tune 8 is the latest flagship version of the company's processor and costs $399, though various upgrade prices are also available. There are also cut-down versions available with a more modest feature set, if they satisfy your needs. It comes in AAX, VST3 and AU formats and runs as a plug-in inside your compatible DAW. You'll need Mac OS 10.6.8 or Windows 7 or higher and a USB port for the iLok key for authorization. A demo is available though this requires a physical iLok USB key as well. 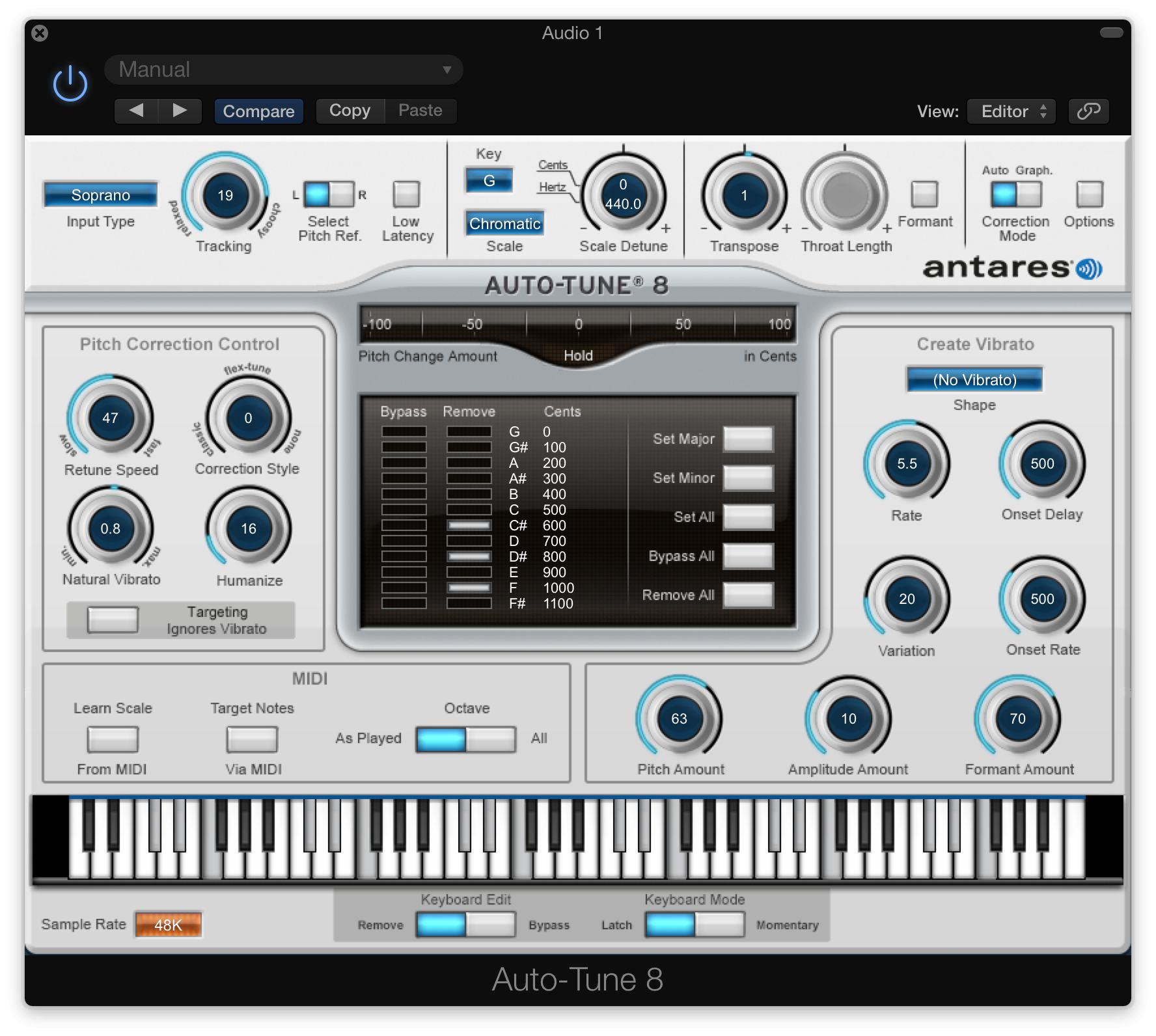 The plug-in is applied as an insert on an audio track and processes sound in real time. It has two main modes: Automatic and Graphical. Automatic is the more straightforward of the two to use but still has plenty of features. You can choose between input types based on voice characteristics and then set a key and a scale, and specify the notes to be corrected, bypassed or removed in the central display area. It's also possible to transpose any part in real time and add “throat length” to alter the formant of the voice without changing its speed.

One of the major new features in Automatic mode is what Antares calls “Flex-Tune Natural Pitch Correction Technology” which offers a sort of variable correction amount. The explanation is that most auto-tuners pull every note towards a preset scale note which can make the results sound overly artificial. With this new system, it's only when a singer approaches a scale note that correction is applied. The idea is that more expressive vocal gestures are left intact. There's a Correction dial that has three areas: Classic, Flex Tune and None. Set near 'none', little pitch correction is applied. Move towards the 'Flex Tune' area and more natural correction is applied, pulling notes in but only when they are close to scale notes. Move over towards 'Classic' and correction becomes more strict, if that's what you're after. So it's kind of like a variable wet/dry control, only with three states.  As ever with pitch correction, tiny adjustments don't always yield obviously different results, but it was certainly clear in testing that the Flex-Tune option provided a halfway house, correcting those notes specified but leaving others untouched. 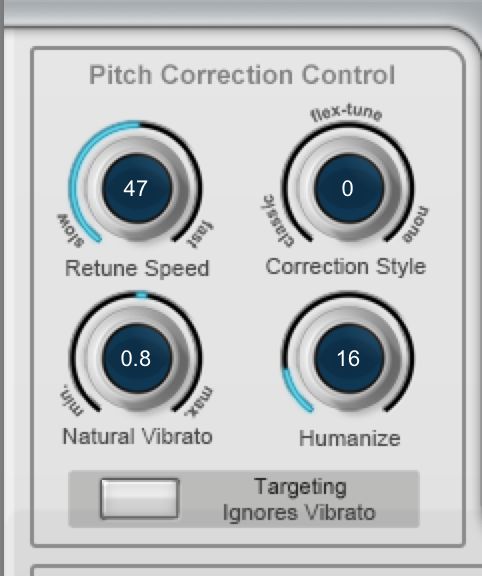 There's also a new low latency mode that's designed to allow vocalists to hear the results of their auto tuning in real time during performance or tracking with no latency. Again this worked well in tests, though hearing a pitch corrected version of yourself coming back in the headphones as you sing can be a little disorienting at first. Nonetheless I can see this being a really useful feature for some performers.

If you switch into Graphical mode you get a more advanced set of tools and a visual representation of the pitch of any audio that runs through the plug-in. This is more like the pitch correction tools you get in DAWs like Cubase's VariAudio and Logic's Flex Pitch. In Auto-Tune 8 there are a number of new features here that will really help your workflow. There's a toolbar containing the various tools you need for selecting and manipulating areas of pitch data in the grid, and these are now active during playback, meaning you no longer have to stop playback, make edits and then hit Play again to hear the results. 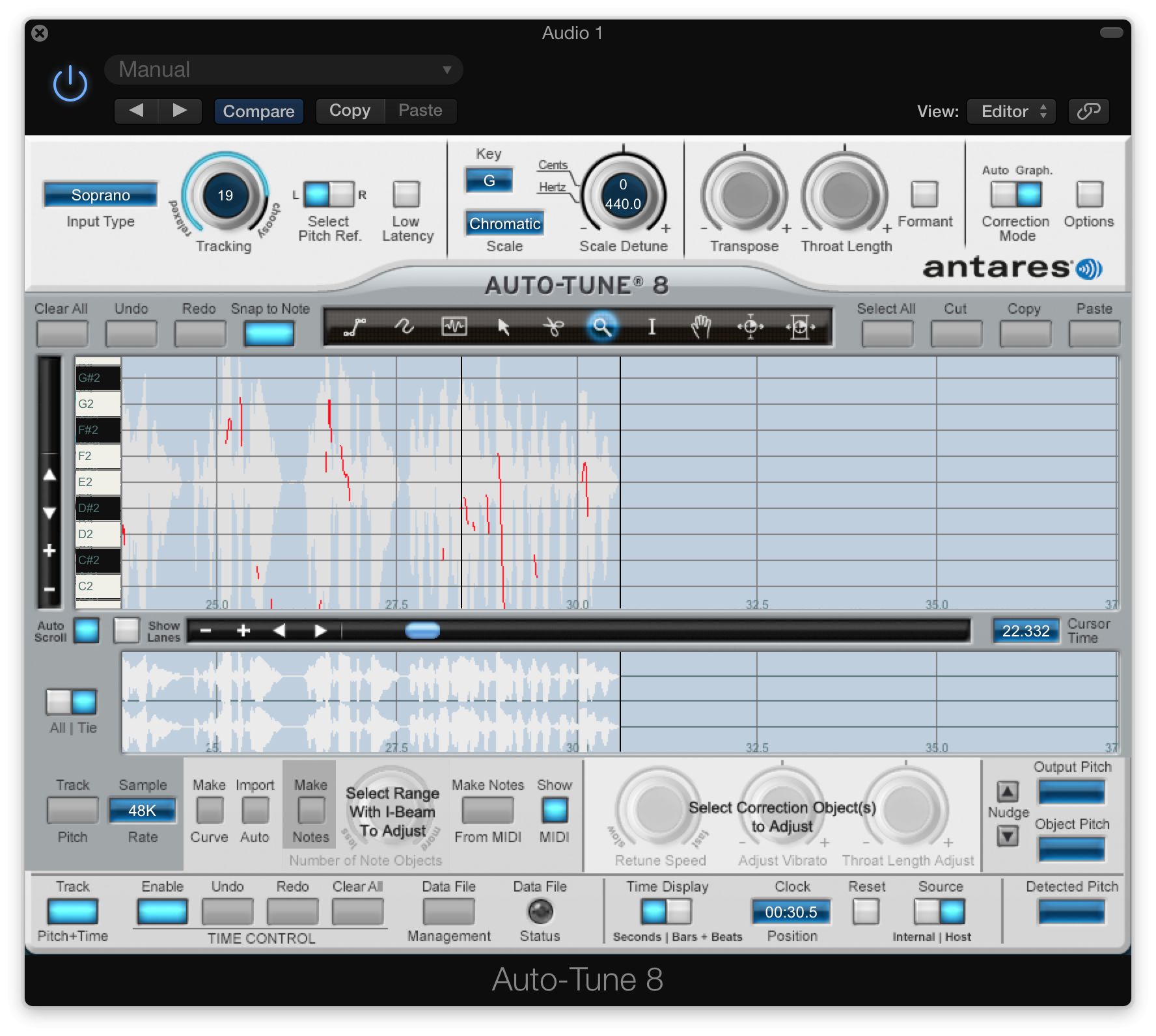 There's audio feedback of note object pitch so selecting new notes just means using your ears, the ability to hide or show amplitude envelope and envelope display to save screen space, and an in increased maximum timeline resolution in bars and beats mode, up to 16th notes. The Graphical section is very flexible, with a range of other tools such as the ability to cut and paste data within the plug-in, modify time as well as pitch and make notes from MIDI data.

Auto-Tune 8 is undoubtedly one of the most powerful pitch correction tools on the market and of course in addition to vocals it can be used on other sources, though vocals are what it's really designed for. Antares claims that it's now virtually impossible to tell that a vocal has had the plug-in applied to it, and with the new Flex Tune mode this is certainly more true than it has been in the past. I tend to find that when auto tuning any vocal with any tool, it's the patience and skill of the person making the settings that tends to make all the difference. In Automatic mode, Auto-Tune 8 does take a lot of the work out of the process and Flex Tune helps to preserve some of the natural expression while still pitch correcting certain notes. You'll still need to exercise some judgment because every vocal is different, and if you need fine-tuning control, Graphical mode is there to help as well. This is a fine pitch correction and manipulation plug-in and though it's at the upper end of the product range, does have many features not found in the more entry-level versions.