Language
If it's anything like their much loved Machinedrum, Elektron Analog RYTM promises to a huge hit. Noah Pred sold his Machinedrum and put RYTM through its paces in this in-depth review.

Swedish manufacturer Elektron made their first big impact with the iconic Machinedrum unit, the digital drum machine known for highly tweak-able sounds, deep booming kicks, and a powerful step sequencer geared for hands-on control. More than a decade later, they've completely revamped their flagship drum machine line, meeting the analog demands of today's electronic producers while adding flexible sampling capabilities and integrating real-time trigger pads with their infamous sequencer for the first time. There's no question the Analog RYTM is a deep and multi-dimensional beast, ready to fuel ideas in the studio and live performances on stage—but what exactly feeds this beast?

Before delving into the rich sonic possibilities contained within, I'll give you a brief overview of what's on offer. Of the 128 pattern slots available, each pattern starts with a kit. Selectable from 128 kits stored on a default memory slot, of which 32 are initially factory presets, each kit contains 12 drum sounds, or “tracks”, which correspond to the 12 trigger pads that cover the left side of the device. 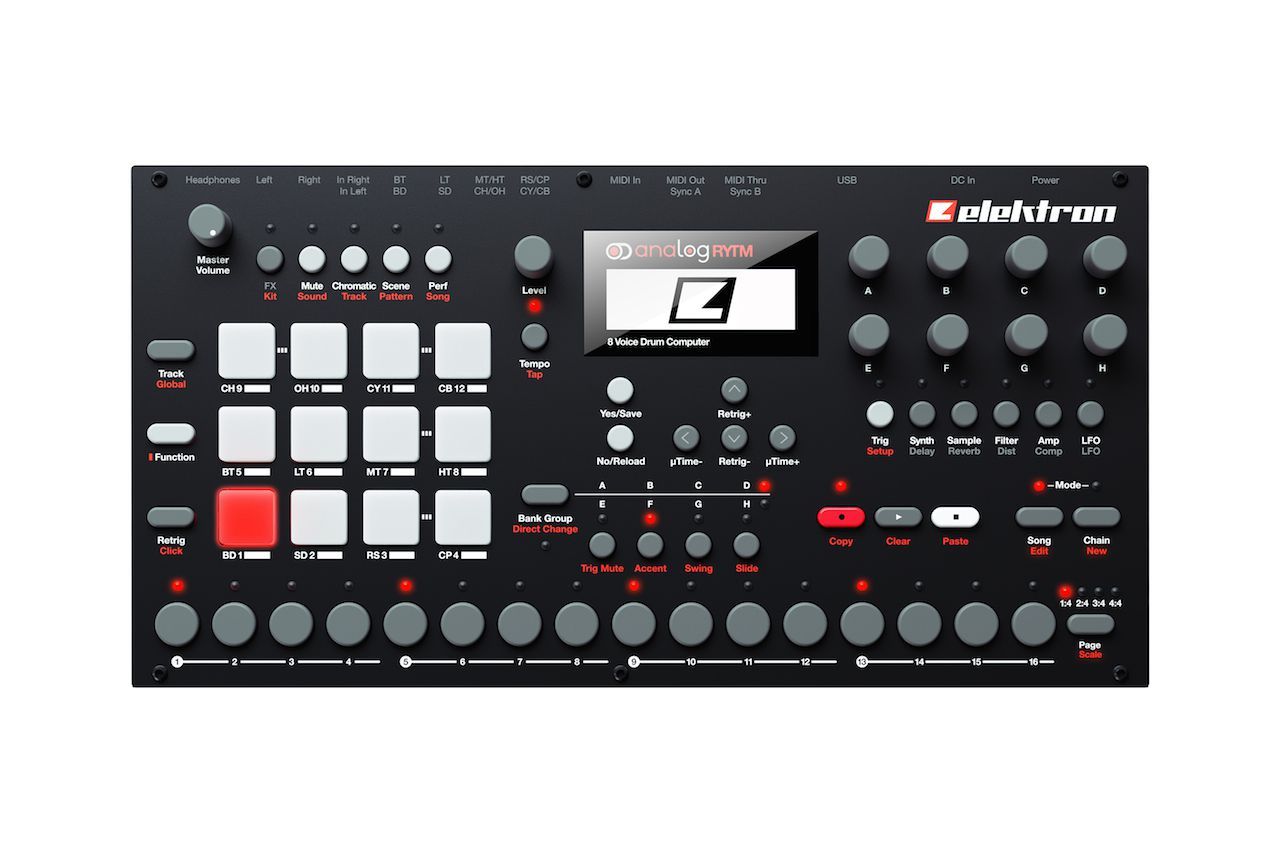 Top view of the Analog RYTM.

The track types are: Bass Drum, Snare, Rim Shot and Clap; Bass, Low, Mid and Hi Toms; Closed and Open Hi-Hats; Cymbal, and Cowbell. To optimize use of the 8-voice analog polyphony the unit offers, a number of these are assigned to choke groups; aside from standard Hi-Hat choking, the Rim Shots and Claps choke one another, as do the Cymbals and Cowbells, as well as the Mid and Hi Toms.

What struck me at first was the sound: not just the powerful analog quality, but also the range of expression on offer—even just on a single pad. To begin with, each drum track has dozens of starting points, each with its own combination of fine-tuned analog circuit routing and customizable sample layers. Once a starting point has been chosen, you can edit the sound through five primary modes via the eight rotary encoders located in the RYTM's upper right area.

"What struck me at first was the sound: not just the powerful analog quality, but also the range of expression on offer—even just on a single pad."

The parameters on offer via the Synth editing mode vary from track to track, or patch to patch—depending on the analog circuitry selected for your sound. Common settings include tuning, sweep time and amount, snap, decay, waveshape, hold time, level, noise decay and amount, symmetry, tone, color, rate, randomization, and detuning. This is where I was able to do the core adjustments of each sound, and the results were stunning in terms of the range of modification each parameter offered. 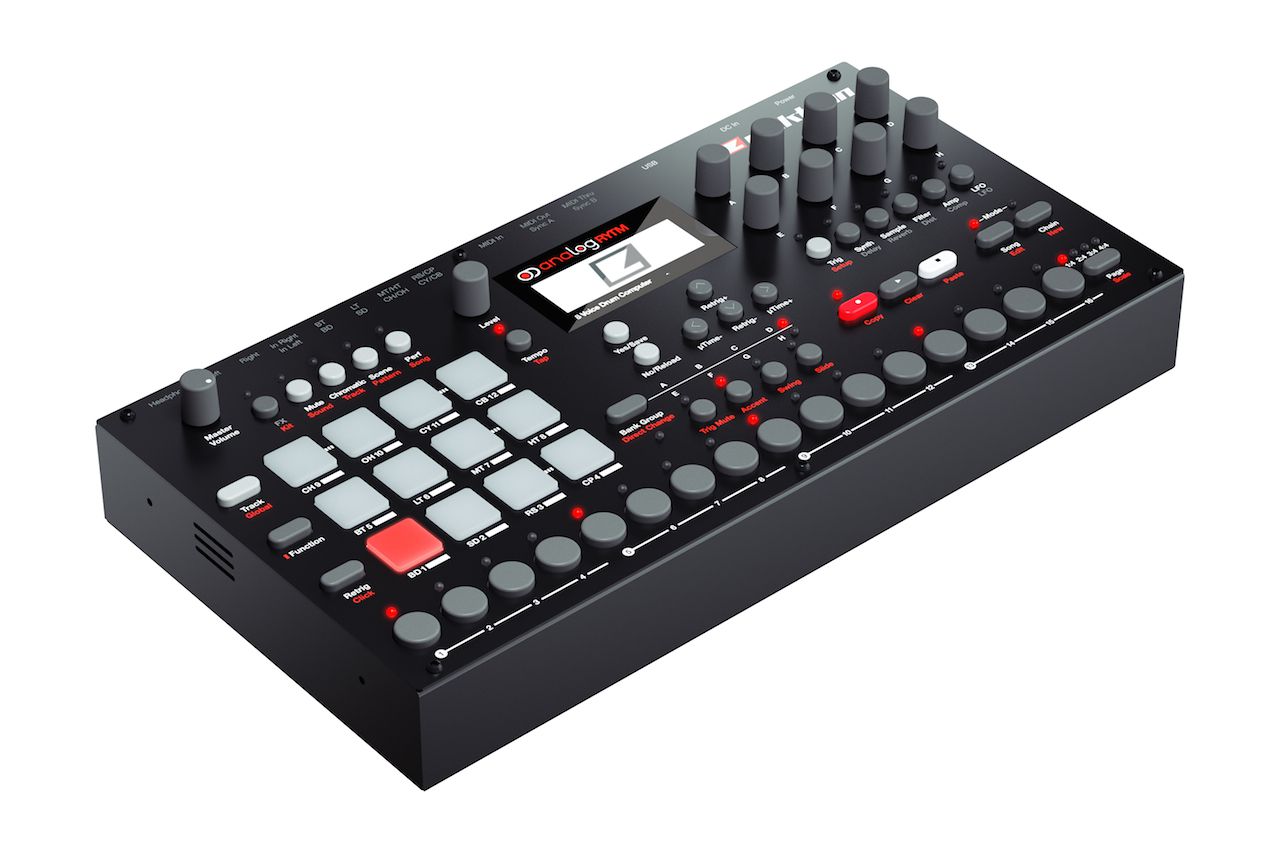 It looks great whichever way you turn it.

In the Sample edit mode, you can easily select a sample from the +Drive library that comes installed, or from any samples you've imported via USB with Elektron's somewhat clunky C6 SysEx transfer application. Once a sample is selected, you can change the tuning, start and end points, activate looping, and add bit reduction for a grittier, crunchier sound.

Whether or not you'll add a sample layer, the Filter editing mode comes in handy indeed. Along with ADSR controls and a bi-polar envelope amount, the standard cutoff and resonance parameters can sweep through seven selectable filter types: low pass 1 and 2, band pass, high pass 1 and 2, notch, and a useful bell peak for accentuating specific frequencies without coloring things too drastically overall.

"The possibilities to manipulate each sound are extensive, to say the least."

The Amp mode shapes the onset and release of the sound via attack, hold and decay parameters. Each sound can also be discretely distorted here via the independent overdrive setting. The built-in Delay and Reverb sends along with panning and volume controls are also accessible here. In the final editing panel, each track has its own assignable LFO with a selectable destination throughout the drum track's many parameters, along with six wave shapes and with the typical speed, depth, phase and attack settings.

As you can imagine, the possibilities to manipulate each sound are extensive, to say the least. I was really impressed with the dynamics and variety I could squeeze out of initially pedestrian patches—to say nothing of the more unusual ones. While it's easy enough to switch between editing modes, I did find myself wishing for a sort of “macro” mode where the eight most important user-defined parameters for each track could be assigned to the eight encoders for easy access during performance and recording. I get the impression Elektron has more up their sleeve for the RYTM than they've shipped the units with to start, so who knows? Perhaps this could be implemented with a future firmware update.

"The button-based step sequencer is an elegant and fun system that only takes a few minutes to grasp."

Anyone familiar with Elektron's previous drum machines should be familiar with their button-based step sequencer, but if you've never used an Elektron unit, fret not—it's an elegant and fun system that only takes a few minutes to grasp.

After selecting a pattern slot and activating step record mode, just select your drum track by holding down the Track button on the left of the device and tapping the drum pad of the track you want to sequence. Now, the 16 buttons along the bottom of the device correspond to the 16th-notes of the selected bar of your pattern; if you increase the pattern length during recording, the sequencer handily copies any material on existing tracks in the previous bars to the newly created bars—seamlessly in real time. Tap a button to enter a step and a red light goes on above the button to indicate the step is active; tap it again to delete it, and the light goes off. 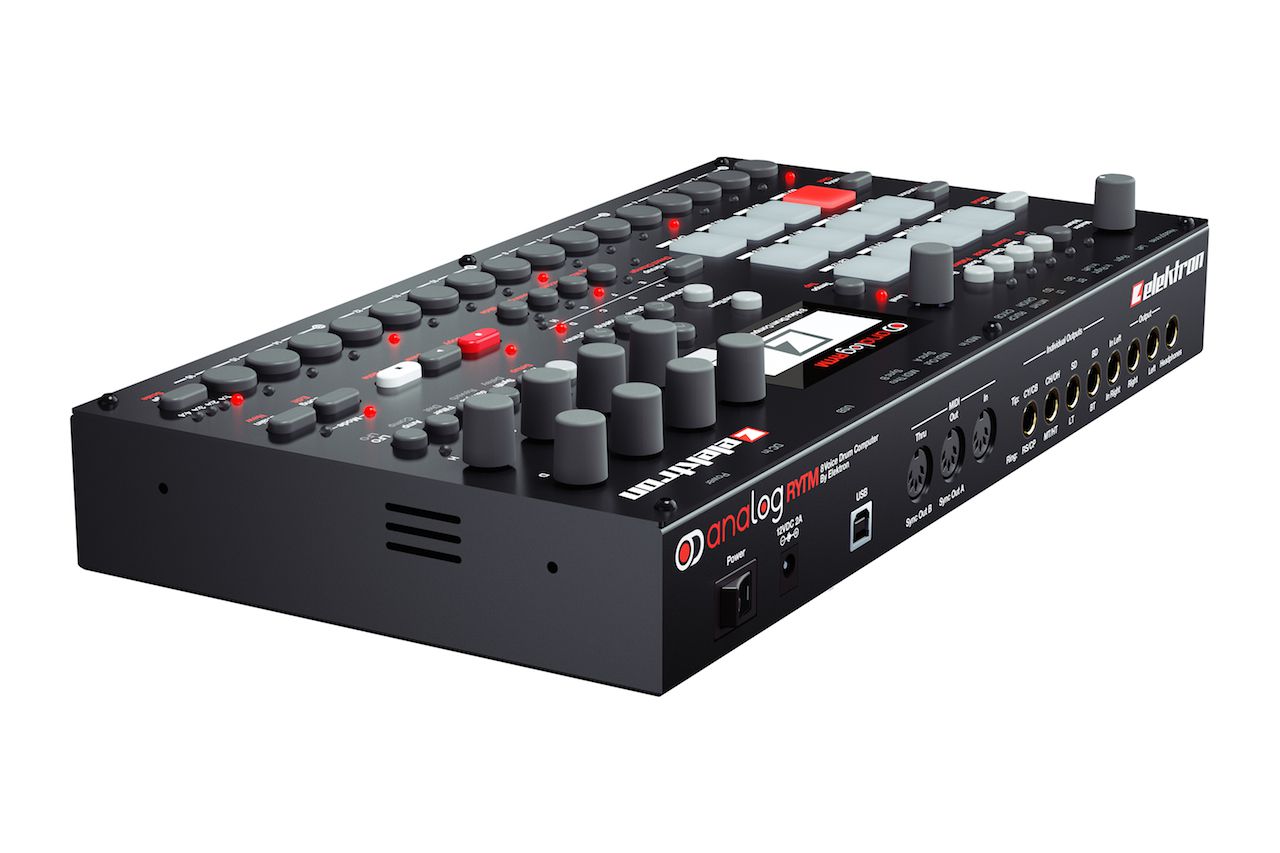 Back angle view of the Analog RYTM.

Better yet? Hold down a given step and adjust any of that track's parameter encoders, and the parameter will be changed strictly for that particular step, allowing for some incredibly dynamic patterns to be generated as you modify the tuning, length, distortion, FM amount, and any other parameters available on a per-step basis.

What's brand new for the Elektron with the RYTM is the velocity and pressure-sensitive backlit pads that allow for real-time note entry à la MPC—either on its own, or along with your existing step sequence. Tap the record button twice while holding the play button to enter real-time recording mode and start banging away: recorded notes will now light up on their respective pads when triggered. These can be quantized, left loose, or quantized in real time immediately after being recorded in. The recorded notes show up naturally as active steps along the trigger buttons for easy step-editing once entered. 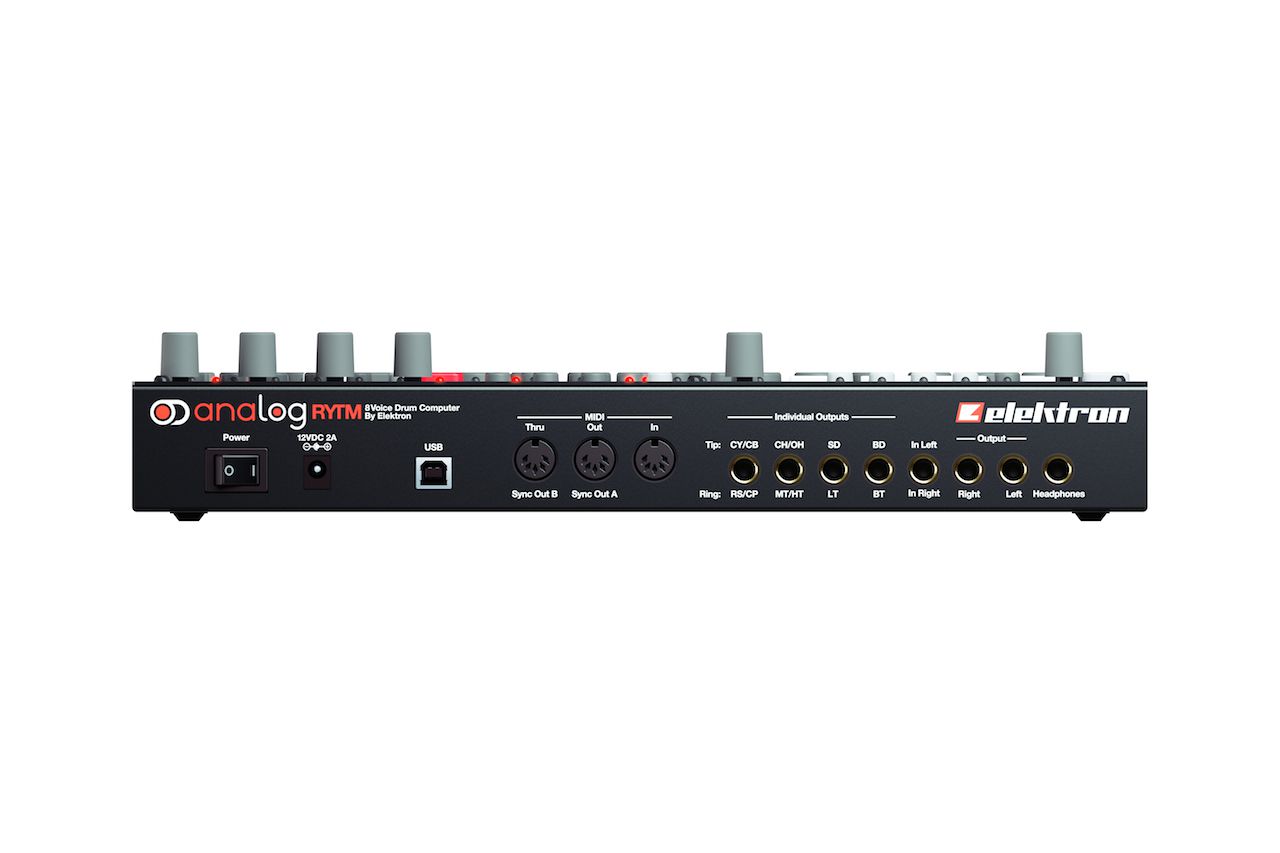 Looking at the ins and outs.

In Chromatic mode, the selected drum track can be played and recorded in real time across an octave of semitones at a time as the twelve pads correspond to a semi-tone each, allowing for quirky melodies and intriguing pitched percussion in a pinch. Scene mode allows for on-the-fly changes between fixed parameter snap-shot states across multiple tracks by striking a blue-lit pad, while Performance mode adjusts single parameters of specific sounds by striking green-lit pads—both making for an engaging performance injected with instant dynamics.

RYTM is a Dancer

"It's hard to imagine what more anyone could want from a drum machine."

Add in a wickedly unforgiving analog delay line, lush, expansive reverb, a filthy distortion circuit and a well-calibrated, punchy master compression—along with the extensive song sequencer and plenty of outputs—and we've got an inspiring piece of kit on our hands. The sounds themselves are probably worth the price of entry; combine them with the step sequencer and real-time drum pads and it's hard to imagine what more anyone could want from a drum machine. Effortlessly integrating digital controls with analog circuitry, the Analog RYTM is a beast of a drum machine ready to tear the dance floor apart.

Ray Man
Great review Noah!
Now how about you guys do a tutorial on Analog Four/Keys?