Language
Orange Amplifiers have been a long-time favorite among guitarists and the new IK Multimedia AmpliTube Orange App allows you to take the legendary Orange rig and effects with you on the go. 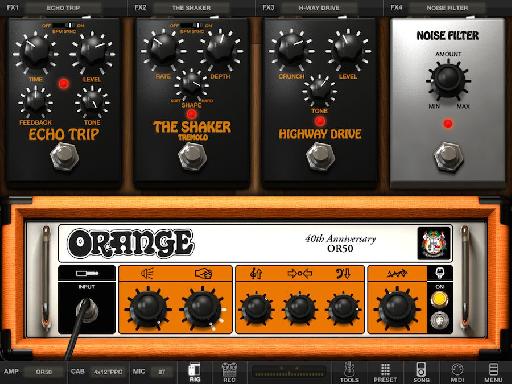 The AmpliTube Orange for iPad is a collaboration between IK Multimedia and Orange. Orange Amplifiers have been a long-time favorite amongst guitarists and the new AmpliTube Orange App allows you to take the legendary Orange rig and effects with you on the go. It's a great app for forward-thinking guitarists that gives players the ability to create and record a multitude of classic sounds.

In order to get started with AmpliTube, guitarists will need to purchase the app from the iTunes App Store and use a connector called an iRig. (There's a whole family of iRig devices that are compatible with the app). The iRig is a guitar interface adapter for the iPhone/iPod Touch/iPad that allows you to connect your guitar to your iOS device. From there, you simply have to launch the app and begin to explore all the cool features AmpliTube has to offer.

I found it helpful to read through the Quick Start Guide, which is accessible from the Menu tab in the lower right hand corner. The app is already configured to make it easy for guitarists to navigate, but I did appreciate the quick break down on the app's many features. 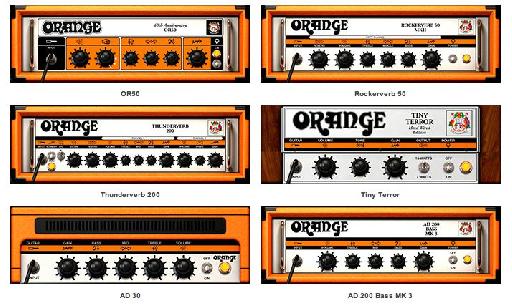 There are six amp models included inside the app: five guitar heads and one bass head. The individual models are named: Rockerverb50, AD30, Tiny Terror, Thunderverb 200, OR50 and AD200. There's a selection of five matching cabinets and a choice of two different mics. All of the controls on the amps respond in real time and are easy to adjust. Overall, the tones produced by the amps sound authentic.

There's four different effects included to choose from in the Stompbox section. The effects are not Orange effects, but instead are some of the best effects that AmpliTube has to offer. Players can choose from Echo Trip, (a delay) Highway Drive, (vintage overdrive) The Shaker (tremolo) and Noise Filter, (reduces hiss). The FX are easily accessible and located right above the Amp section. Each effect can be turned on or off by clicking the Stompbox button. AmpliTube offers players the ability to record their songs right inside the app. Simply click on the Rec tab to access a single track recorder. The recorder is expandable to up to eight tracks, although the additional tracks have to be purchased from inside the app. The full recorder allows players to bounce their tracks as well as import tracks and edit recordings. It's worth mentioning that AmpliTube is also compatible with Audiobus and Inter-App Audio, inter-app routing systems that allows you to connect music apps together.

For guitarists who like to jam along with recordings, there's a handy Song feature that allows you to import music from your devices and play along in real time. There is a useful feature called 'no voice' that mutes the center channel, which is typically where the lead guitars are placed in the stereo spectrum. This is a handy feature for learning to solo and playing along with your favorite recordings. You can also slow down songs using the 'speed trainer' without using the pitch. Another helpful feature is the Loop button, which allows you to repeat one section and learn to master the difficult passages in songs.

There's a whole range of MIDI features too; iRig devices can be used to control AmpliTube with any MIDI pedalboard. The MIDI compatibility opens up a whole new world of possibilities for the musically adventurous.

AmpliTube Orange is an impressive app that gives guitarists access to legendary tones in a portable, easy to use app. Guitarists who are open to future music technologies will really appreciate how easy and well-thought out this app is. With an affordable price tag, now everyone player can afford to sound like a rock star.