If you're looking for a new way to play your hardware and software MIDI instruments, this intriguing Theremin-style device looks good. Hollin Jones checks out the Altura from Zeppelin Design Labs.

UPDATE: In the time between reviewing and going to press the developer notified us of a new software update that we didn't have time to test but is present on all new units. They told us: "we just released a software update for the Altura that significantly improves its playability. We re-wrote the algorithm that processes data from the right sensor to make it much more precise and responsive, both in Play mode and in XY mode. If you are an Arduino junkie, you can update your unit with the new code in a few seconds".

Here’s an interesting new product from Zeppelin Design Labs, makers of quirky, bespoke hardware including the Percolator 2 watt tube amp and Macchiato Mini Synth. The Altura is a Theremin MIDI controller that emulates the behaviour of everyone’s favourite odd retro instrument - the Theremin. It comes either pre-built or in kit form if you’re the kind of person who likes soldering. Many people do, though I’m not one of them. There’s also a pre-cast acrylic case, or a template to let you make your own. Being someone who much prefers playing instruments to building them, I was happy to receive the fully completed, “ready to go” unit. 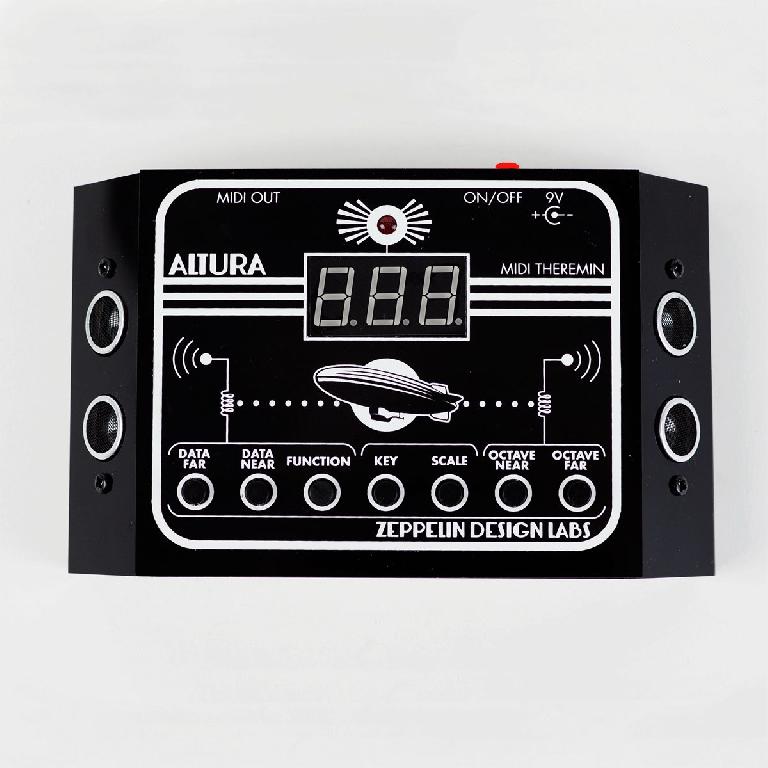 You’ll probably have seen people playing a Theremin in old TV footage, waving their hands around in the air to adjust pitch, volume and portamento. In truth it is much harder than it looks, since not only are there no frets or keys, there’s literally nothing to see or touch. So the performer must literally play by ear. On the upside, it’s a very unique way to create music. Indeed, it makes touching an iPad screen - something invented many decades after the Theremin - seem rather standard by comparison. The nearest comparison is something like the D-Beam controller than Roland included for many years in some of its products, and was - probably is still - popular.

The pre-constructed model is lightweight (it’s really just a few electronic components) and has connections on the rear for power and a MIDI out DIN port. The original Theremin used antennae but here, on the left and right edges are 2x2 sonar range finders that transmit the signal you manipulate to control the MIDI signal. It’s worth mentioning too that by popping the top cover off you can also power it via a battery so you don’t have to always be near a power outlet. Feedback is via a three-segment LED display that, while basic, provides all the information you need, when combined with the control set on the front. 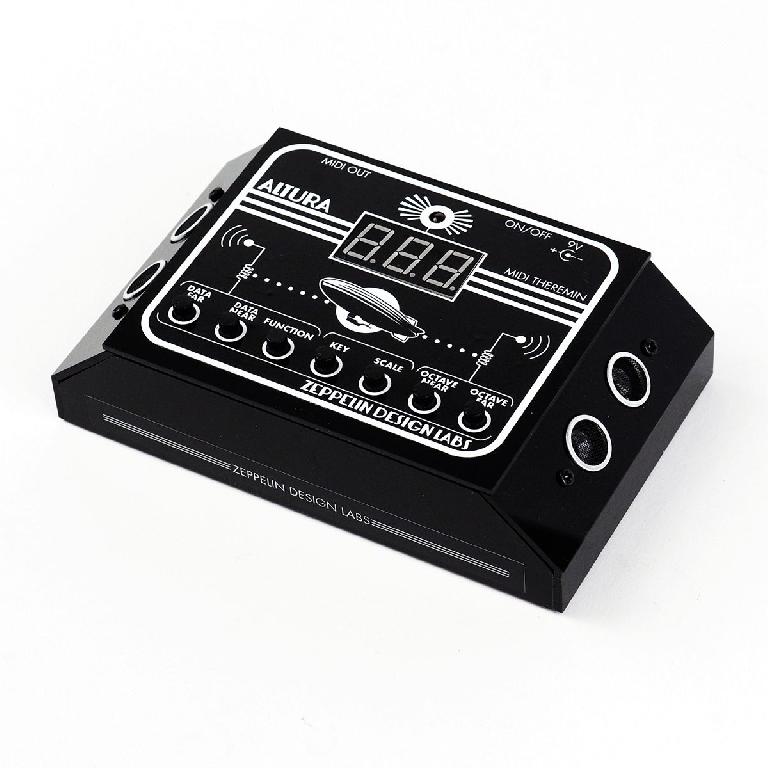 You can use the dials on the front panel to alter the way the unit interprets your playing. The right sensor controls MIDI pitch and note on/off. There’s the option to select 1 to 8 octaves of range, ascending or descending; choose a key and also a scale. The scale guide is printed on the underside of the unit for handy reference and there's also a list of functions and what they correspond to - helpful when your only other source of variable visual feedback is the three digit LED readout.

The left sensor handles the sending of control change messages, so this is a secondary way to manipulate the signal. You can control pitch bend, modulation, velocity, channel volume, portamento time and the data value for each - like with any CC in your DAW - can be set from 0 to 127, ascending or descending.

It’s also possible to put the device into X-Y mode, where both the left and right sensors send control change data using any two controllers. Internally, it runs open source software written in the Arduino environment, so it’s fully hackable. Some features work best when paired with the company’s Macchiato synth, but otherwise it’s fully compliant with the General MIDI standard.

Wave Your Hands In The Air

Playing Altura is a little challenging to learn - like a real Theremin would be - and you’ll need to practice to go beyond the initial “wow, I can make sweeps and swoops” style of playing. But once you start to get the hang of it, it’s tremendous fun and even quite addictive. Hook it up to your hardware or software synths for a whole new playing experience. Since it sends General MIDI signal and certain CC messages it can be hooked up to pretty much anything. In my tests, all the synths I connected it to seemed to accept its signal just fine. 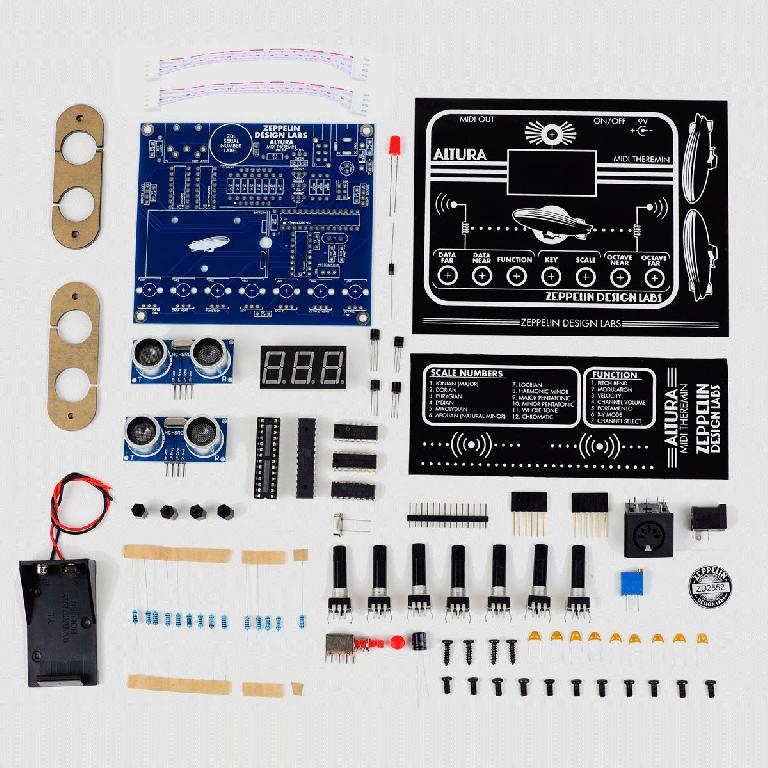 Flipping through the different modes was great fun. Trigger a note on with one hand then pitch bend it with the other. In mode 2, add modulation and in mode 3, change note-on velocity - all the while changing the note that is played by moving your right hand closer or further away. In mode 4, change channel volume while a note sounds and in mode 5, alter portamento time. X-Y mode is really fun, and lets you assign any two CCs and data range using the front panel dials and in mode 7 you can use hand movement to select a MIDI channel.

Affordably priced, this is a great addition to any studio to bring a fresh angle to live performance. It might seem like a novelty and sure, not every track is going to require Theremin-style input. But in the seemingly endless quest to add more expression to MIDI performances with companies like ROLI going super hi-tech, this represents an alternative approach. Simple, intuitive and fun, it’s also priced in a way that means it’s likely not a purchase you will have to agonise over too much. All in all, a cool and fun way to get more organic control over your MIDI-triggered hardware and software.

Pros: Great fun and truly expressive. Affordable and hackable. Build it yourself to save some money.  Bring new life to software and hardware synths. Looks cool.