Sara Simms gets hands on with the Allen and Heath XONE:96 mixer designed by DJs for DJs. But just how useful is it in the real world? Read on to find out more.

I was thrilled to finally try out the Allen and Heath XONE:96 in my home studio. The first time I was able to get hands on with the mixer was at ADE 2018 when I played on SpinnZinn’s live broadcast for Allen & Heath. 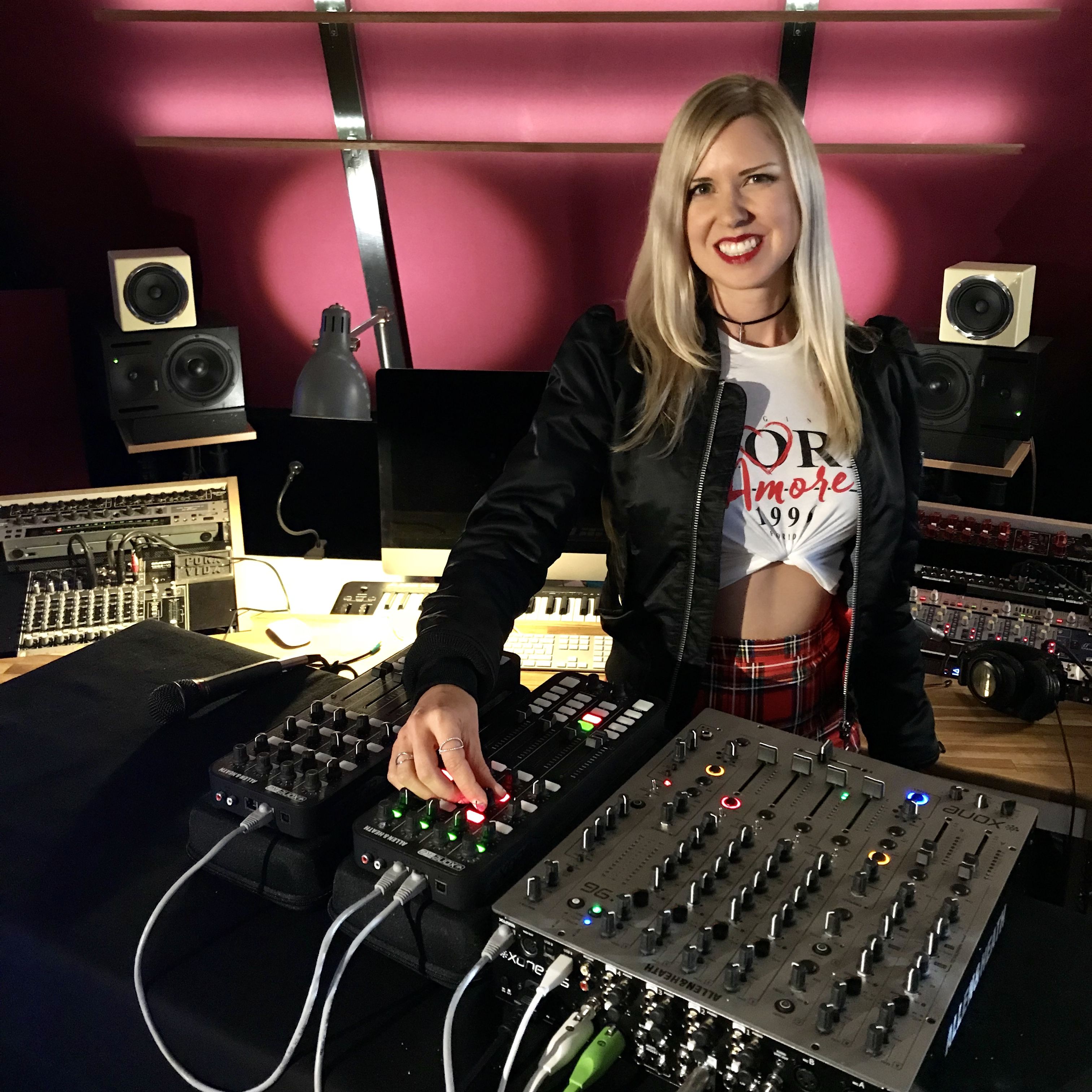 As a long time XONE:92 user, I was instantly comfortable playing on the XONE:96. Developed for artists who want to push the boundaries of performance, the XONE:96 is a modern interpretation of the XONE:92. 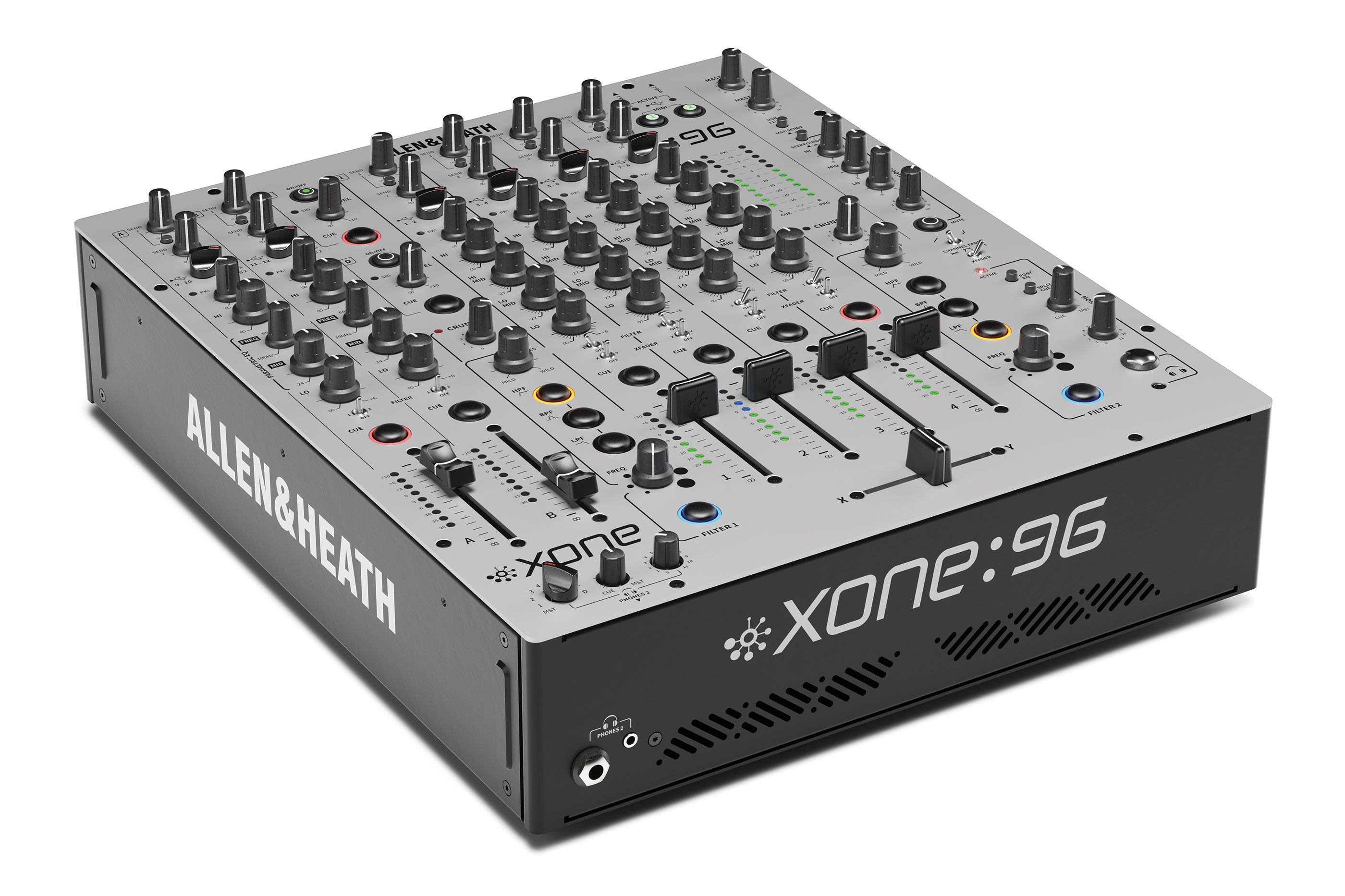 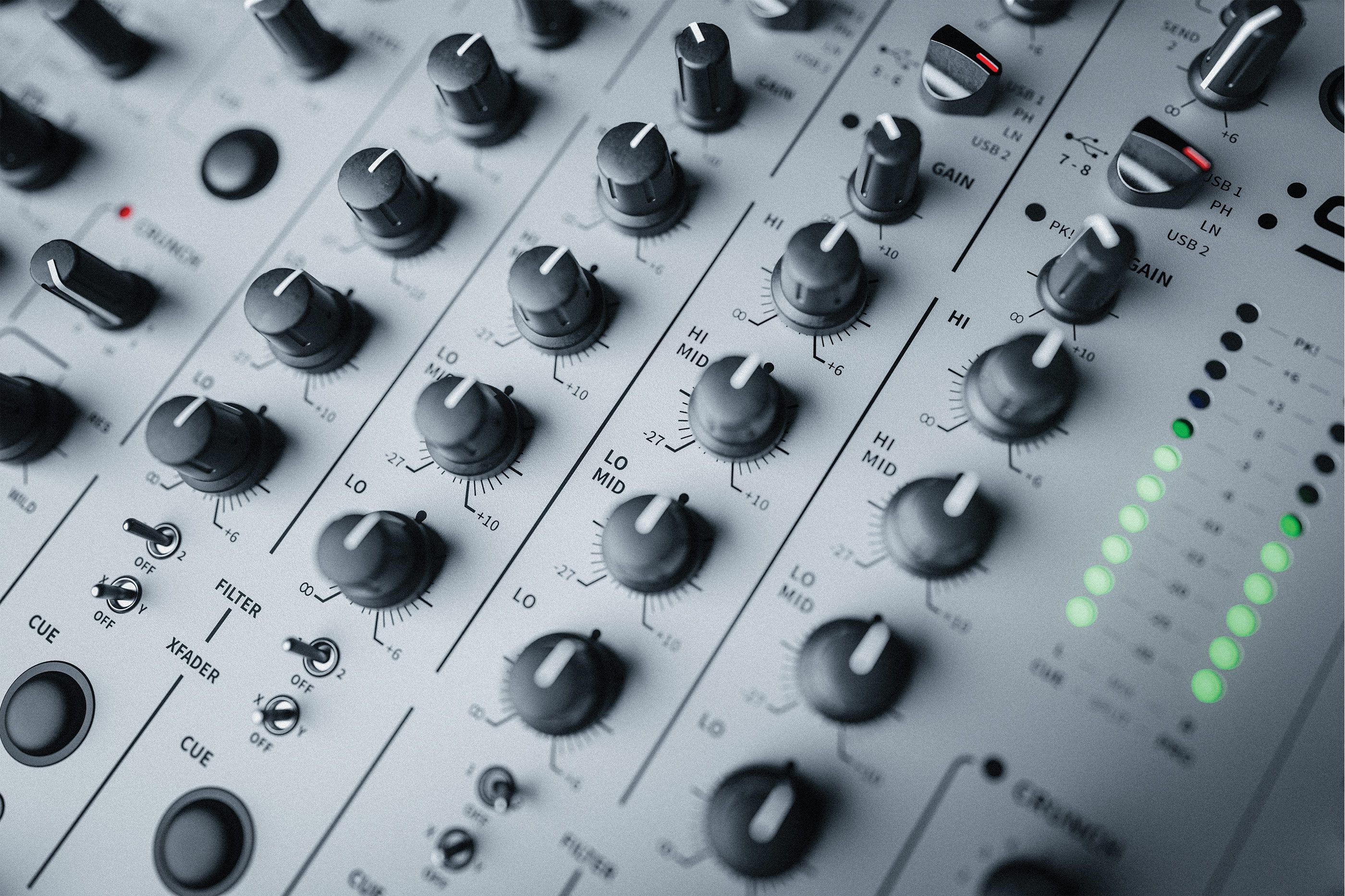 The XONE:96 features four main stereo channels, each of which have two auxiliary sends. The aux sends allow you to send audio to external devices (eg. an effect unit). Aux 1 can either send audio pre or post fader. The pre-fader position allows you to send out audio when the channel fader is down. While in the post position, audio is only sent when the channel fader is up. Below the pre/post fader switch is the channel select switch, which can be set to USB 1, phono, line or USB 2. The XONE:96’s phono inputs have been carefully matched with the line level inputs, which means there’s less gain adjustment necessary when switching between phono and line. This will be a helpful feature for those who like to mix up digital and vinyl tracks in their sets.

Further down on the mixer is XONE:96’s four band EQ, which is a fabulous feature that allows DJs to mix with exacting precision. Though it may take artists who aren’t used to dealing with this style of EQ time to adjust, having a fourth band really makes a difference when carving out a mix. Below the EQ are the filter assign switches; each of these channels can be assigned to one of the XONE:96’s two filters or set to the off position where they can be used to bypass the filter. 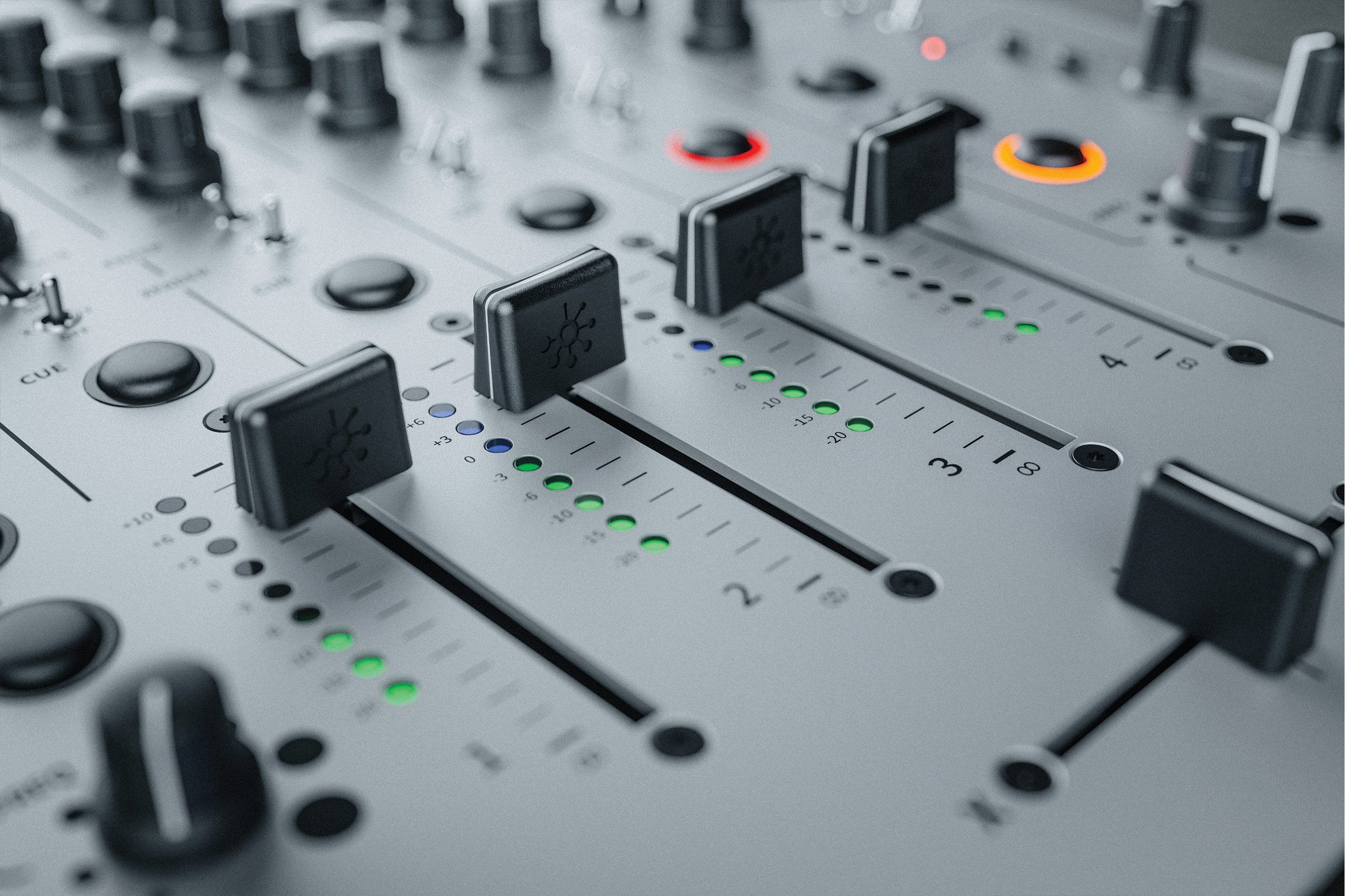 The crossfader (XFader) assign switches are found below the filter assign switches. Each channel can be assigned to either side of the Innofader crossfader. The Innofader crossfader is personally a favourite feature of mine; these crossfaders can be used for either mixing or scratching. I like the feel of each of the channel fader’s linear faders; they’re a custom designed 60 mm VCA (voltage controlled amplifier) fader. The linear fader itself is a sideways sitting fader that minimizes dust and dirt getting stuck in the faders.

On the right hand side of the mixer is a three way fader curve selector switch, which is a thoughtful new feature on the XONE:96. This switch allows artists to adjust the XONE:96’s faders. Set all the way to the left, this setting gives the faders the same feel as on the XONE:92; the final adjustments to the top of the fader create the most noticeable volume changes. As you toggle through the switches all the way to the right, the faders give a more linear reaction. The crossfader curve on the XONE:96 is selectable; setting it hard right selects the sharpest curve and hard left selects a gentle fade.

One particularly interesting feature on this mixer is that it includes two USB ports, which allow for easy changeovers and back to back sets. The sound card has six stereo channels into the mixer and six stereo channels out and provides high quality sound that can run up to a 96 kHz sample rate with 32 bit depth. The master buss can feed inputs 11 and 12, allowing for recording on a laptop. The XONE:96 is certified by Native Instruments and fully Traktor scratch compatible, which means all you need to do is plug your computer into the USB port to use this mixer with Traktor.

On the back of the mixer, below each phono input is a button which allows you to select whether the phono or line should be routed into the internal audio interface’s input.   The XONE:96 has the ability to send and receive MIDI with a total of 31 MIDI enabled controls, including 19 different buttons, 5 faders and seven rotary switches. The mixer features a MIDI port on the back, and allows you to send out MIDI clock from any connected computer. Its fully ready for integration with drum machines, analog equipment and other outboard gear.   Cue System

The XONE:96’s mixer cue section is located on the right hand side and has some unique features. At the top is an active LED, which turns red when any button is selected. The cue system includes a post EQ button, which allows DJs to monitor pre or post EQ. Below the Post-EQ is the Split Cue button and the Cue Master Mix control, which allows you to blend the master left-right with your Cue signal in your headphones. The Cue Master Mix control is by-passed if Split Cue has been selected.  Each channel on the mixer has a cue select button; one channel can be selected at a time or multiple channels can be selected at once.

As you press cue buttons on the mixer, the previous cue you selected is automatically cancelled. This can be changed from the auto-cancelling mode to a latching mode. 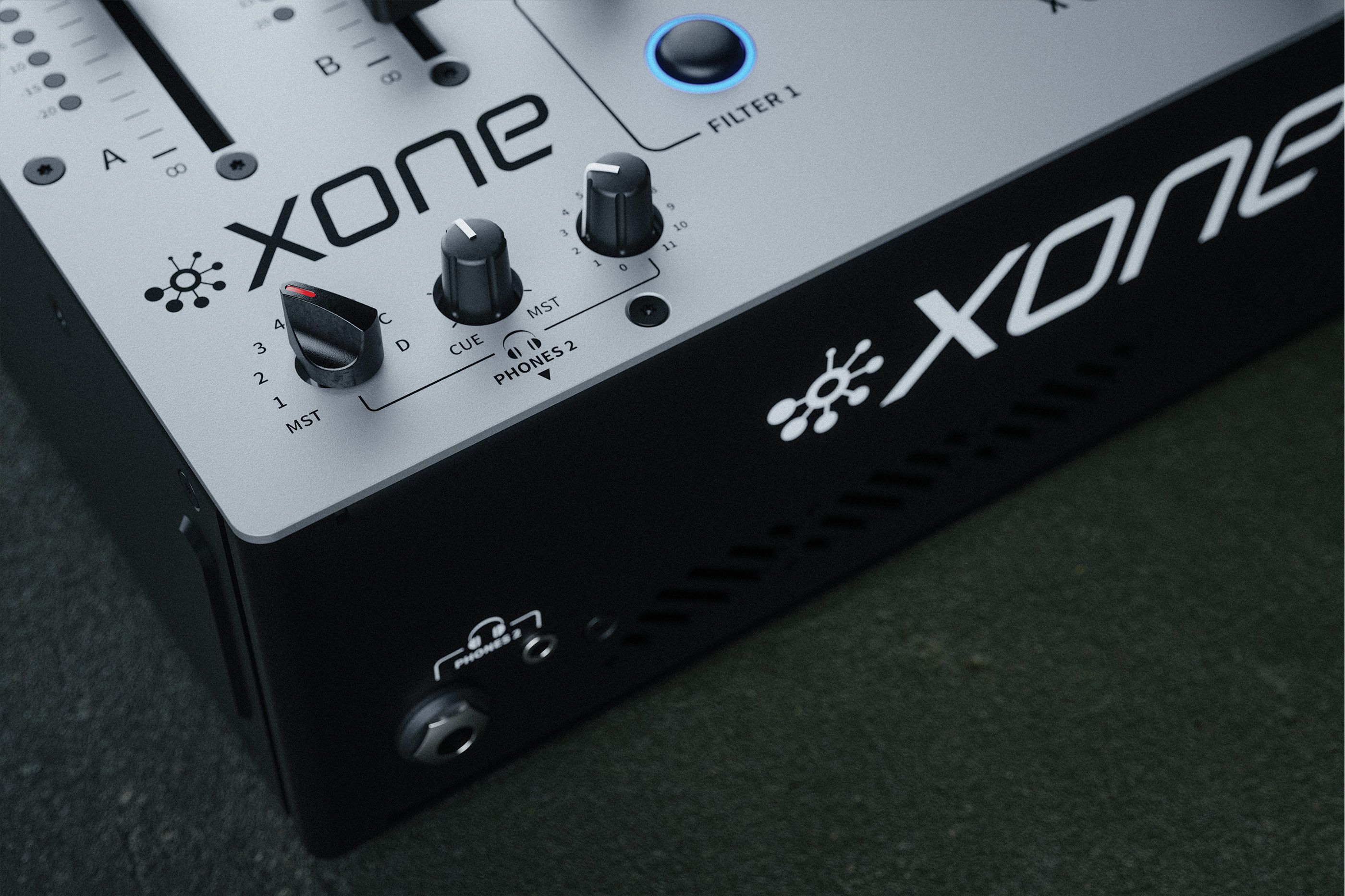 The XONE:96 includes a fully independent second Cue, which allows for two DJs to cue at the same time. Cue two has a nine-way select switch, and a cue master/mix control which works in the same way as the main monitor section. The dual cue a great feature, as it allows two DJs to play back to back on the mixer. 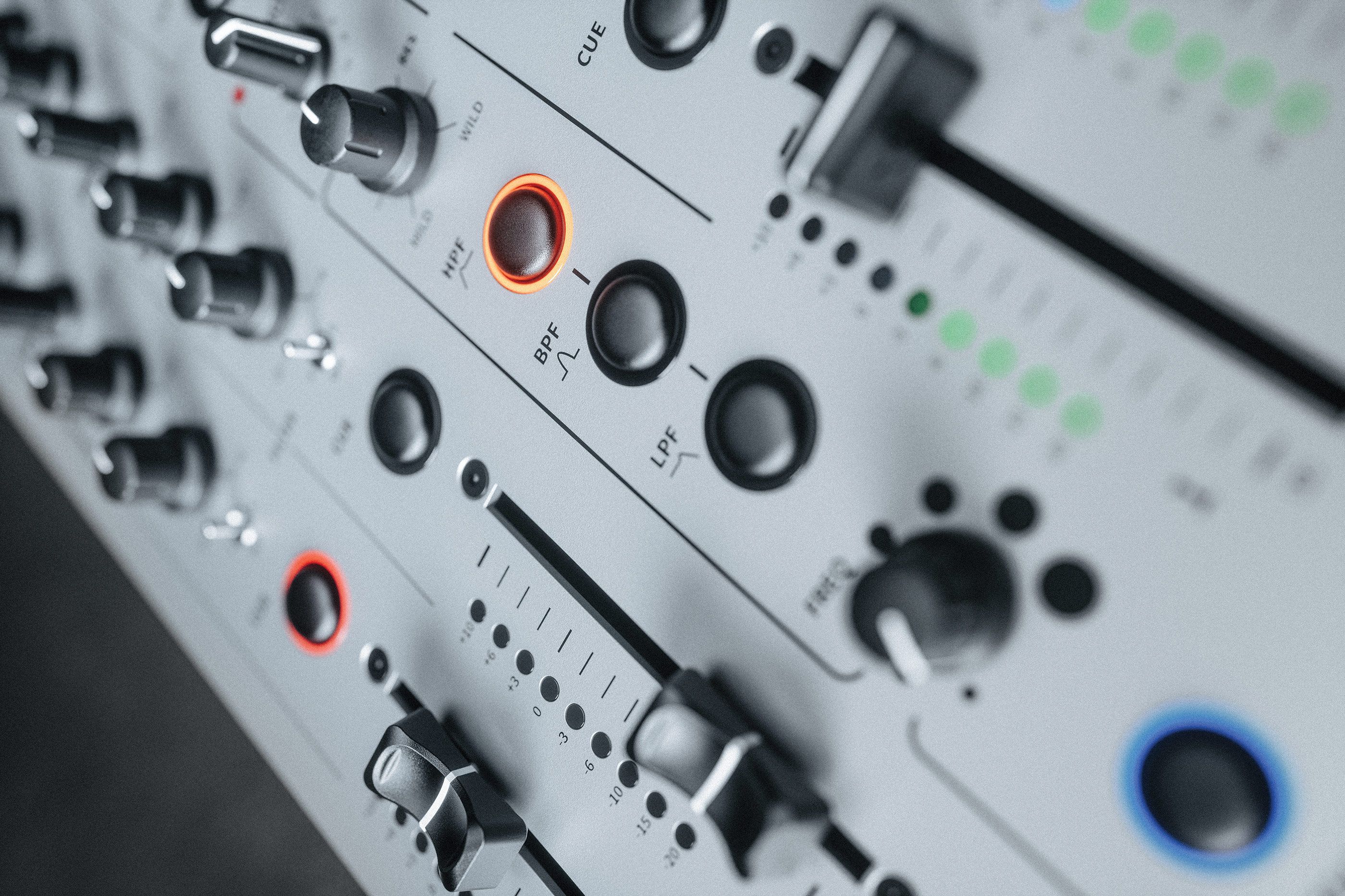 The XONE:96 has two VCF’s (voltage controlled filters) on either side of the mixer and can be assigned to either channel. Each filter section includes three types of filters, Low Pass Filter (LPF), Band Pass Filter (BPF) and High Pass Filter (HPF). Multiple filters can be selected at the same time by pressing filters simultaneously. The filters sound smooth and allow for creative mixing. There’s no filter pop when either of the filters are engaged. I like the resonance settings on the filter, which can be set from mild to wild to produce some awesome-sounding filter sweeps.

New to the XONE:96 is the new Crunch feature, which introduces harmonic distortion into the filter. Crunch is a cool sounding effect that can be used to add density to records or as a performance tool. It's worth mentioning that Crunch can only be used when a filter is engaged and assigned to a channel. 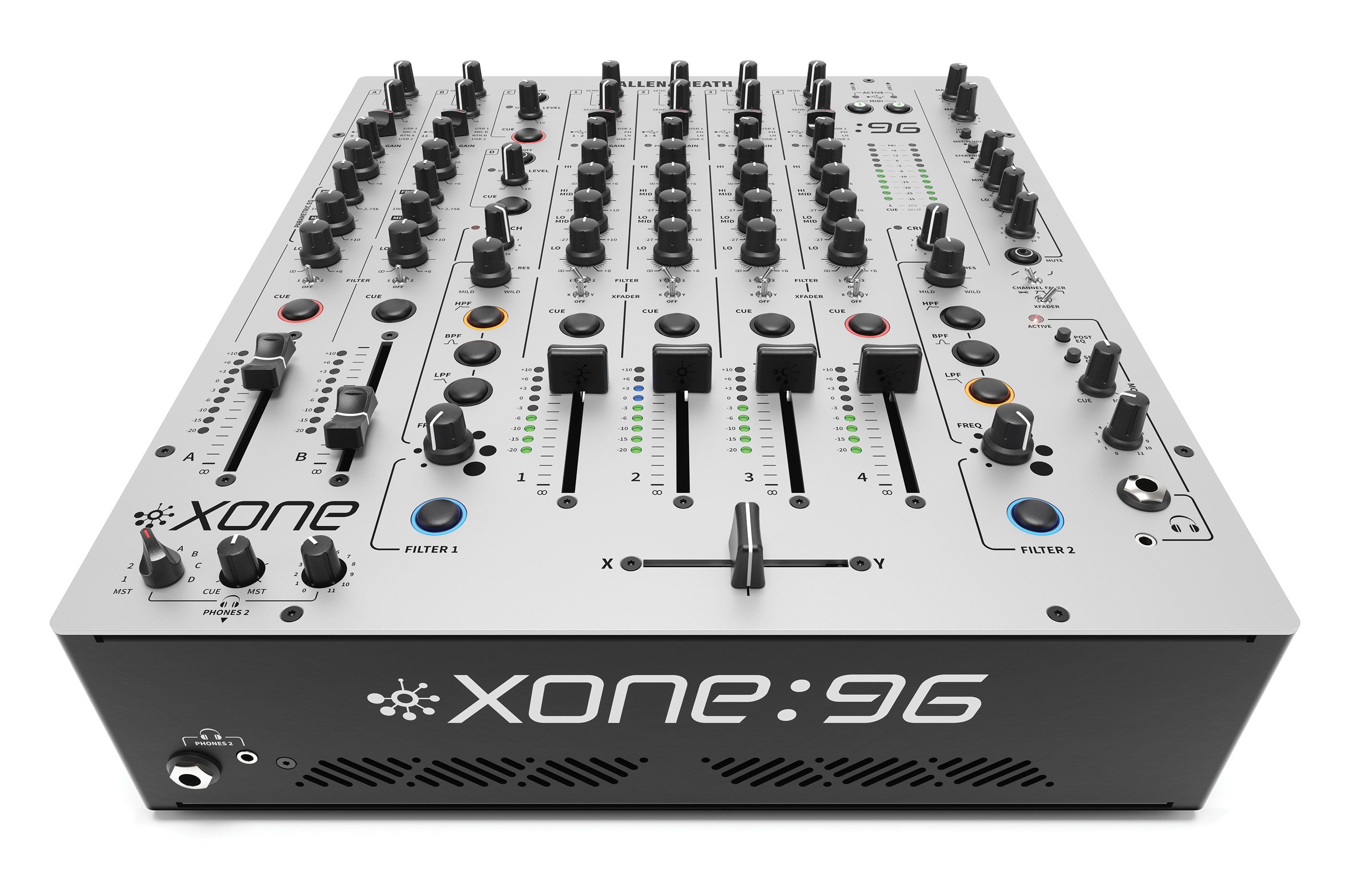 The XONE:96 features four return channels; on the far left of the mixer are return channels A and B. Aux Sends 1 and 2 allow you to send audio from that channel out the Aux Sends to external effects units or through the internal sound card. In this section there’s a selectable switch that allows you to choose between USB 1, Mic A, Return A and USB 2. Next is a gain control, a peak indicator and a three band EQ. A new feature on the XONE:96 is the ability to route channels A and B to the filters. The return channels have cue inputs and a 60 mm fader. There’s an addition of two stereo return channels, which are fully analog and have a simple on/off switch, a gain control and cue.

A signal switch displays in green to let you know when there is signal present or red to let you know the input is distorting.   The XONE:96 Master Insert allows you insert external hardware in the master output signal path. The master signal from the mixer is sent to the FX unit and returns to the mixer before being sent out the master and booth outputs. Given the number of return channels, features these channels offers and the ability to insert equipment into the master signal path, I think its fairly safe to write that the XONE:96 will satisfy the needs of even the most creative DJs and live performance artists. 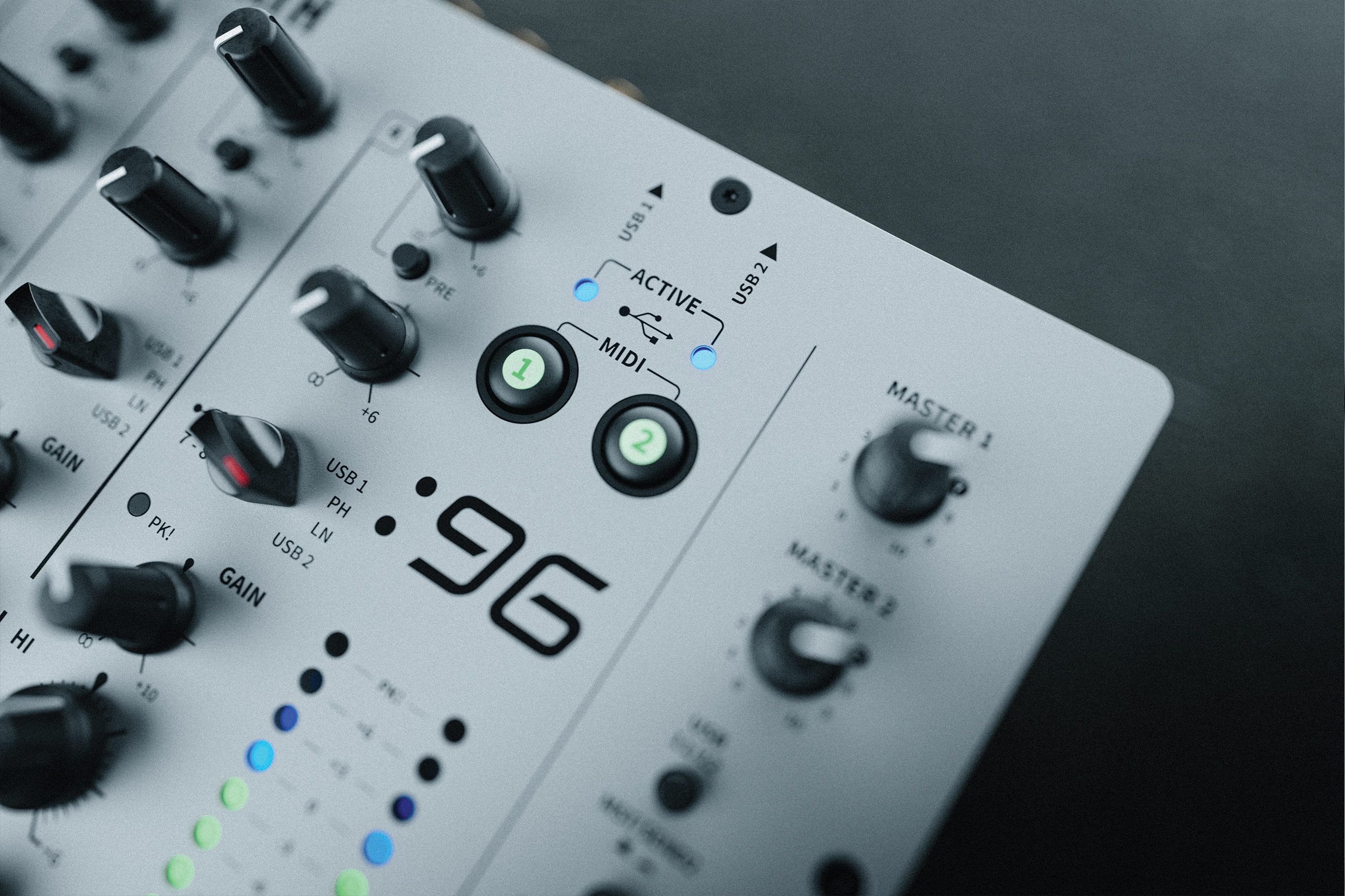 The main meters follow the selected monitor source. The default display is the left/right mix levels but when a channel’s cue switch is selected, the main meters display the input channel levels. There are two Master controls to adjust levels for the main left/right mix; MST 1 is routed through the XLR output and MST 2 through two ¼” jack outputs.   The booth section has some cool features; there’s a stereo/mono switch that allows left and right monitor signals to be summed together. Next is a 3-band EQ that allows DJs to adjust the sound of the monitors to their liking. There’s a level control and a mute switch; when pressed this switch mutes signal to the booth outputs.

The additional EQ controls on the booth monitor section are a helpful addition for artists who want to tweak the sound of the monitor mix to their liking. 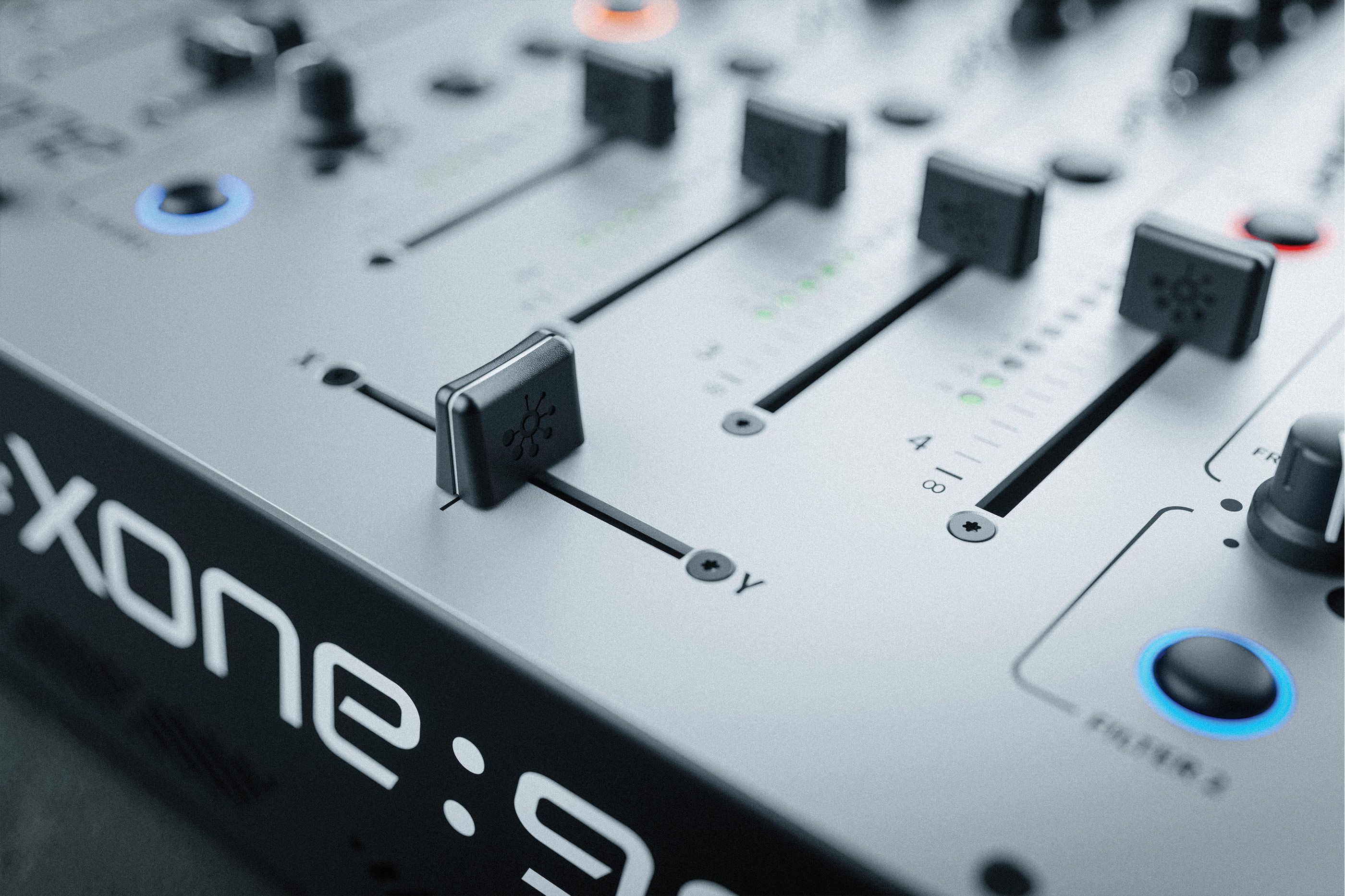 The XONE:96 is an amazing sounding mixer that’s extremely well built. It's been crafted with thoughtful design and a multitude of features. A few highlights include the four return channels, two USB ports, sound card that’s Traktor certified, the updated filters, four band EQ and booth section. This a fully professional mixer that’s reminiscent of the XONE:92, but updated for the modern DJ. With its slick design, powerful sound and creative features that will appeal to artistic DJs, the XONE:96 is sure to become a classic mixer that will be loved for many years to come.