Language
Are you in the market for a compact, feature-rich digital mixer? Joe Albano finds out if the Allen & Heath Qu-24 can be the heart of any small studio.

Allen & Heath's Qu-24 Digital Mixer is the middle child in a family of compact digital mixers—its siblings include the (rackmountable) Qu-16 and big brother Qu-32. All three share a common design and feature set—aside from the obvious differences in channel count, the Qu-24 (and 32) adds a few additional features, as well. While its primary application would be live mixing & recording in small/medium-sized venues, the Qu-24 could function equally well as the heart of a small studio, thanks to its ability to interface with a DAW. 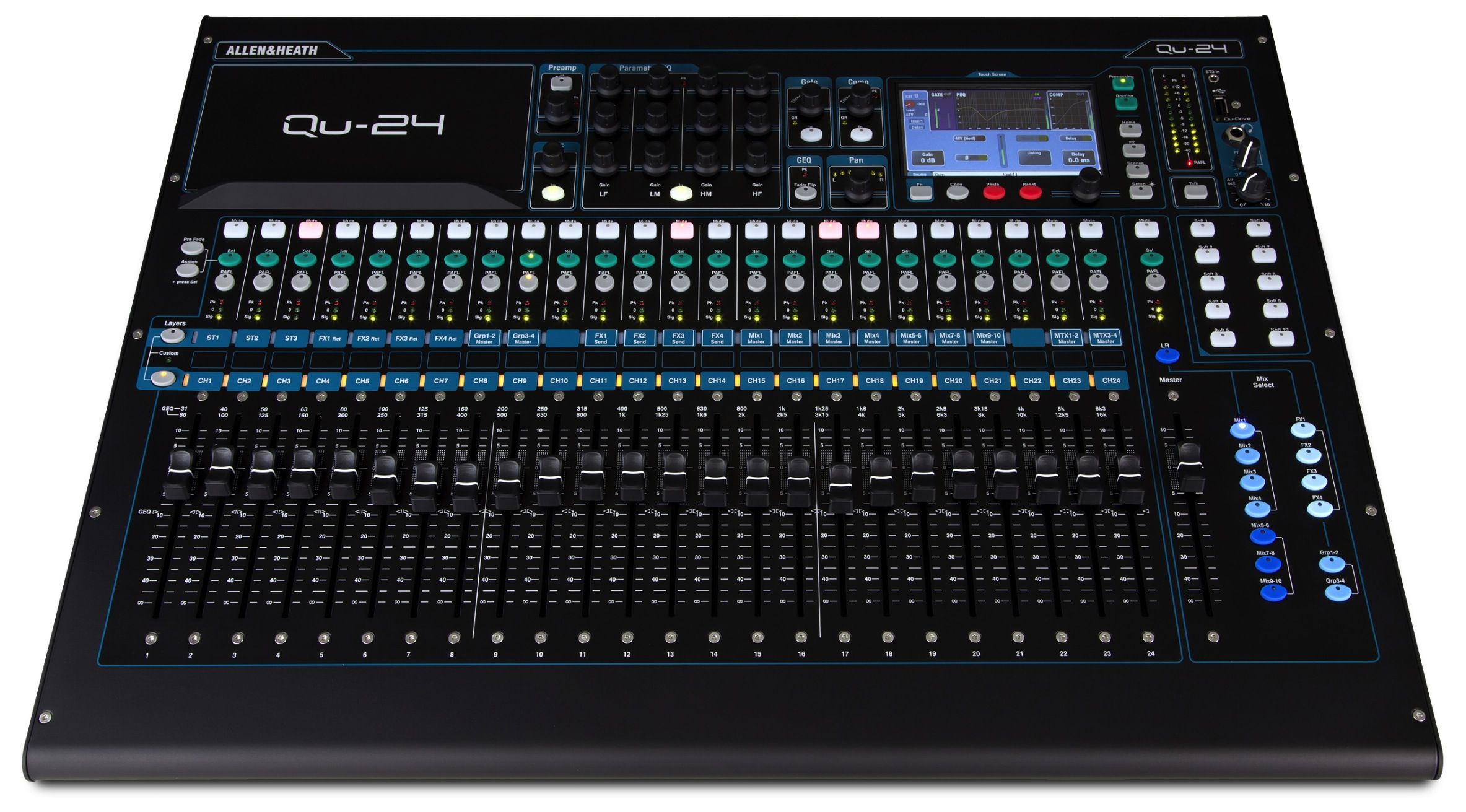 The Qu-24 has 24 (mono) mic/line inputs, 3 stereo line ins, and a dedicated talkback (mic) input. On the output side, there are stereo Main & 2-Track outs, along with 10 Mix outputs (configured as 4 mono and 3 stereo outs), a stereo Alt Out, and a digital (AES) out. The Qu-24 also has 4 Group outs and 4 Matrix outs, not found on its smaller stablemate, the Qu-16 (the Qu-32, besides the additional 8 mic/line inputs, also doubles the number of Group outs).

Besides the analog audio I/O, the Qu-24 sports some other connections as well. There's Ethernet (100 Mbit/sec) and USB (2.0, labelled USB B) for streaming multitrack audio to and from a computer/DAW (and note, the USB connection now works with both Mac and PC computers too). The Qu-24 can also send & receive MIDI, allowing it to function as a control surface.

For recording, there's a second USB connection, on the front panel, labelled Qu-Drive. This is for a USB hard drive, which provides stereo or multitrack recording capabilities. The drive can be formatted from the Qu-24, and records up to 18 tracks of 48 kHz, 24-bit WAV files, which can then be played back or transferred to a DAW.  This could be a great convenience for live recordings of smaller ensembles (within the limit of the Qu-Drive track count), eliminating the need to bring along and interface with a separate DAW rig.

Besides the standard industry connectors, the Qu-24 features A&H's proprietary dSNAKE connector, which allows for a long (≤ 390') multichannel cable run from mix position to stage over a single Cat 5 cable. A&H offers an 8x4 (I/O) remote unit, the AR84, and a 24x12 box, the AR2412. The larger remote rack can also interface with A&H's ME-1 Personal Mixing System, which can provide musicians with individually-controllable personal monitor mixes.

So while the basic audio I/O for the Qu-24 is all self-contained, all this additional connectivity would let the mixer serve as the hub of a larger, more elaborate system, making it highly adaptable to different situations and installations. To top it off, A&H offers an iPad app, Qu-Pad, which provides for remote control of mixing functions from your iPad. With the appropriate network connections in place on the Qu-24, the Qu-Pad app could be a great convenience for dealing with any number of mixing-related scenarios, like letting a second engineer deal with monitor mixes while the primary engineer handles FOH, or the like. 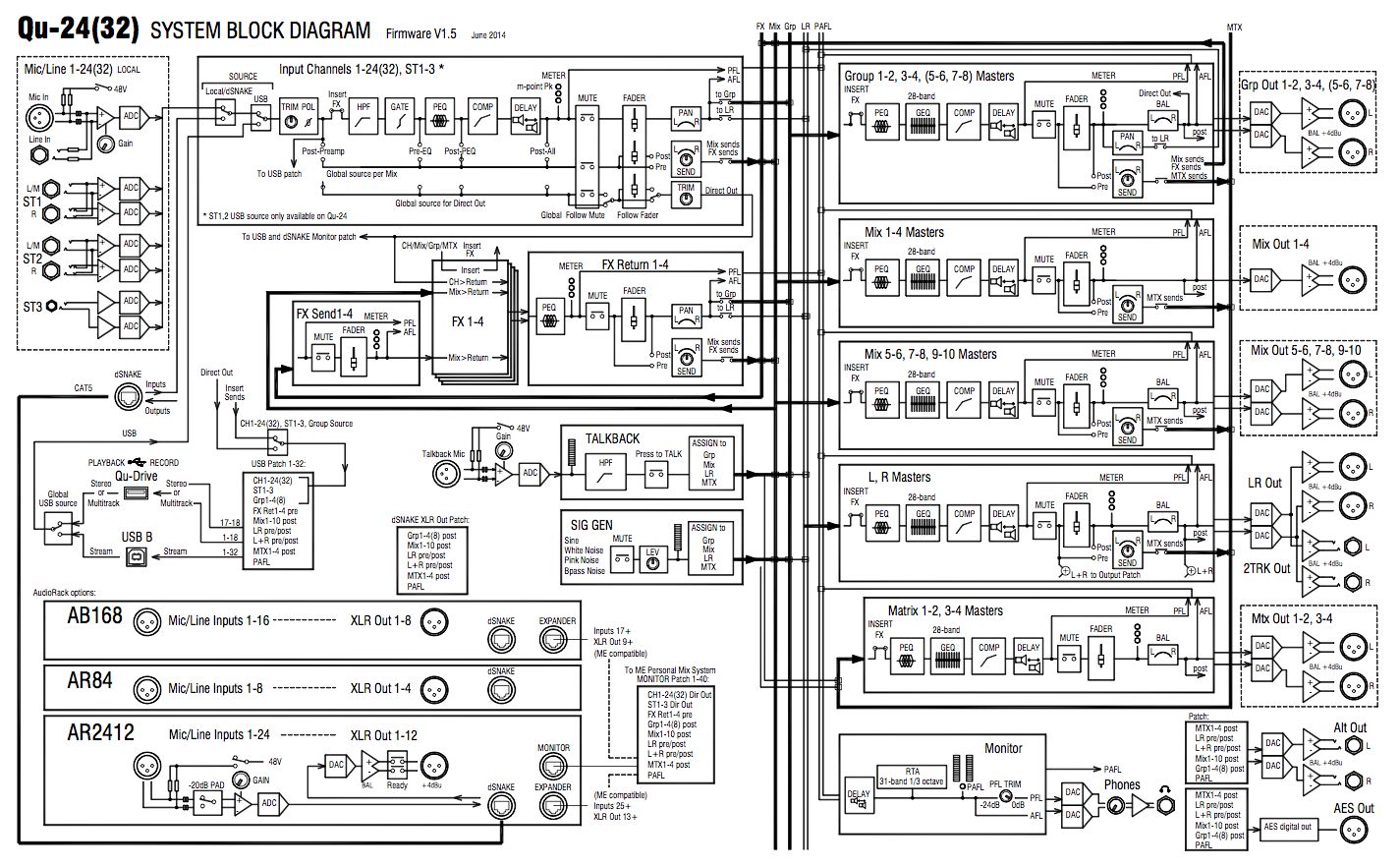 The Qu-24 packs a lot of routing & processing flexibility into a relatively small space, but I found it easy to acclimate to. The front panel should be immediately familiar to anyone who's ever used a digital mixer.

There are 25 motorized faders (24 channels + Master), and each channel strip consists of the fader, Mute, Select and PAFL buttons, along with simple metering (Sig, 0, Pk). There are three banks: Bank 1 = mono ins 1-24, and Bank 2 = stereo ins, group & mix masters, and FX sends & returns; Bank 3 is for a custom arrangement. The faders also provide other functions (like graphic EQ control) as well, depending on the application. On the right side of the mixer are master controls, mix selection, and 10 assignable soft keys (the Qu-16 has only 4). Toward the top there's a Talkback button, and a (generously powered) headphone jack+level knob.

Along the top is A&H's “SuperStrip”—a set of rotary encoders for quick & convenient adjustment of basic mixing functions like panning, EQ, and dynamics. There are dedicated encoders for 4 channels of Parametric EQ, Gate & Compressor Thresholds, Pan, Preamp gain, and HPF/cutoff. Just to the right is the touch screen, an 800x480-pixel color screen, which is the heart of the QU-24's user interfrace. On the screen's right are quick-access buttons for  Processing, Routing, and several Setup screens, including the four FX processors, and saving & recalling Library Presets & (100) Scenes, which include everything from FX settings to channel setups to global configurations. A Function key calls up additional pages for each category, and there's a single assignable rotary encoder that follows selections made by touch.

Each Input channel, and each Group, Mix, & Matrix out, has a dedicated 4-band parametric EQ (with graph), compressor (with four different response types, peak, average, opto, and “punchbag” (VCA?)), and basic delay. The inputs also include preamp trim, gate, and pan controls, while the outs add a graphic EQ. There are four FX processors, from A&H's flagship iLive series of mixers, which include reverb, delay, and modulation FX—these are primarily intended for send & return configurations, but they could also be used as inserts. 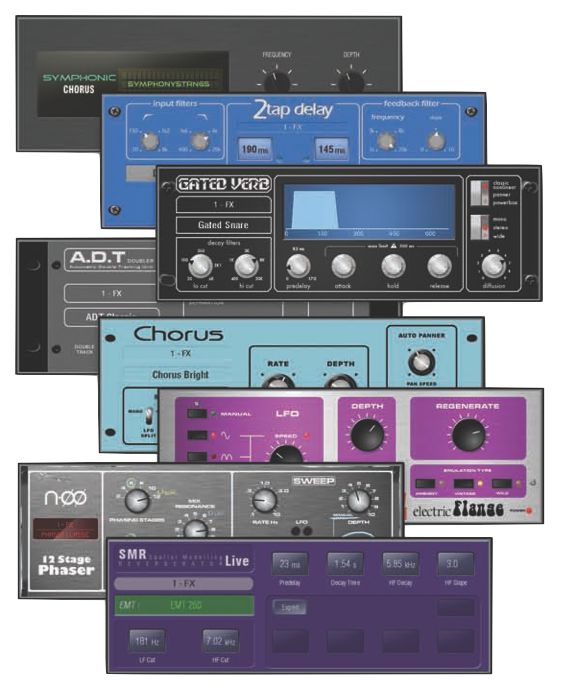 There's much more on tap, including comprehensive metering and even a real-time analyzer (for ringing out a room), but there isn't enough space to touch on it all, so I'll wrap this review up with a few impressions about the Qu-24 in use.

Though the box it came in was huge, the Qu-24 is extremely compact, given the amount of I/O and the comprehensive feature set, yet the mixer surface never felt cluttered. The only thing that was a tad cramped was the 5” Touchscreen—it felt reliably responsive, but the graphics are small enough that I might worry about selecting the wrong function in the rush of a live situation (I'd assume the slightly larger 7” screen on the Qu-32 would alleviate that concern). The faders, encoders, and buttons all had a solid feel, and the touchscreen and indicator lights were bright—there'd be no missing the status of a function, even in a dark club (and the Qu-24 does have a socket for a standard gooseneck light, if needed).

Though the box it came in was huge, the Qu-24 is extremely compact, given the amount of I/O and the comprehensive feature set, yet the mixer surface never felt cluttered.

I tried connecting the USB B port to my Mac, and it worked perfectly. The Qu-24 showed up immediately as an interface in Logic (it's class-compliant, so no driver required), and I was able to transfer multitrack audio reliably, with no glitches or perceived latency. 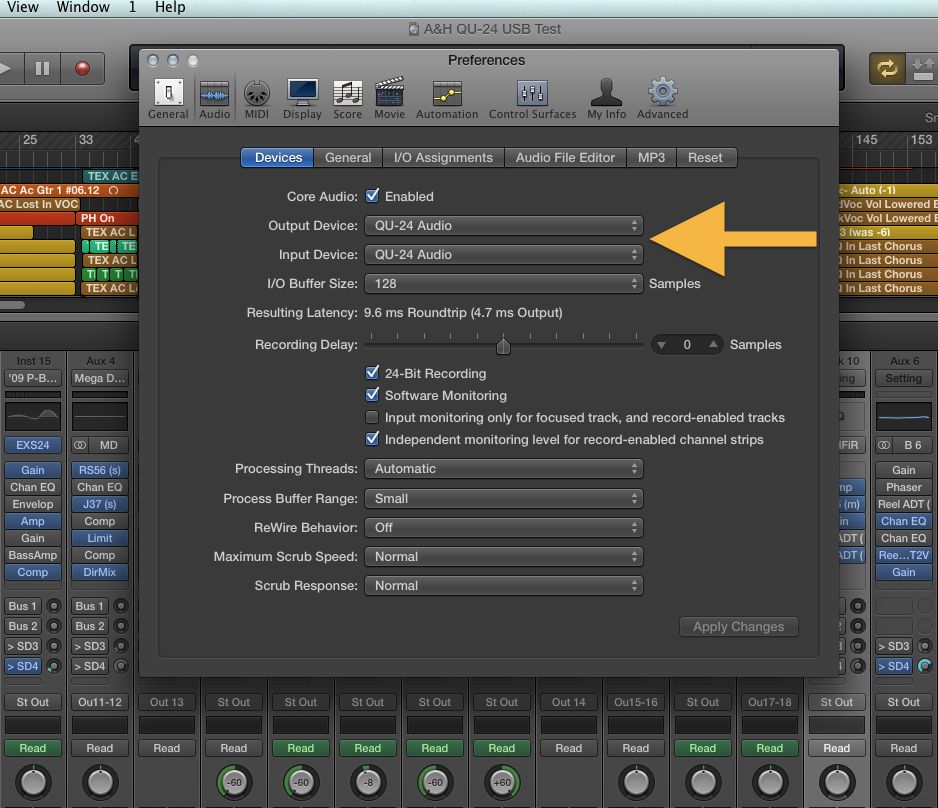 The Qu-24 interfaced with Logic via USB.

Mixing a song, I was impressed by the quality of both the basic channel processing and the four FX—in fact, I wish there were more than four! It didn't take long to build up a speedy workflow, and although I thought it might be uncomfortable stretching to reach the SuperStrip and Touchscreen at the top of the mixer surface, it turned out that the unit is shallow enough that this wasn't an issue after all.

(...) anyone who's in the market for a compact, feature-rich digital mixer should take a serious look at the Qu-24.

While I didn't have a chance to test all of the Qu-24's comprehensive routing and monitoring options, or the Qu-Drive recording feature, it was obvious that this board would be at home in many situations—I can think of several live recordings I did in the last year where this console would have made the experience so much more efficient and convenient! All in all, I think Allen & Heath may have a winner on their hands with the Qu series—anyone who's in the market for a compact, feature-rich digital mixer should take a serious look at the Qu-24.