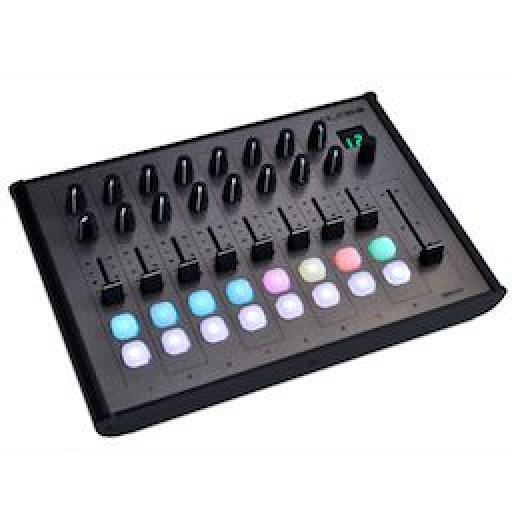 Language
Livid are well known for their hand-built, rugged and beautiful controllers, like Ohm64 and Code. Does their latest (more portable mixer-style) controller, Alias 8, live up to the Livid name?

Livid Instruments have been steadily creating a name for themselves. If you aren't familiar with them, they've built amazingly solid and functional controllers like the Ohm64 and Code. And, if you've never actually touched one of these devices... Well, you really should. They are hand-built in the USA, and are about as solid and beautifully crafted as you can get. Seriously, these controllers are not like some of the controllers built by other manufacturers out of plastic. These devices are made of wood, aluminum and some plastic. To sum it up: They are built like tanks.

Recently, Livid Instruments released a new controller that is really their first step into the small, transportable arena. This new device is known as the Alias 8, a controller seemingly designed to be more of a mixing control surface for those on the go.

But, are looks deceiving? Does it have a few more tricks up its sleeve? Read on, and let's find out, together. 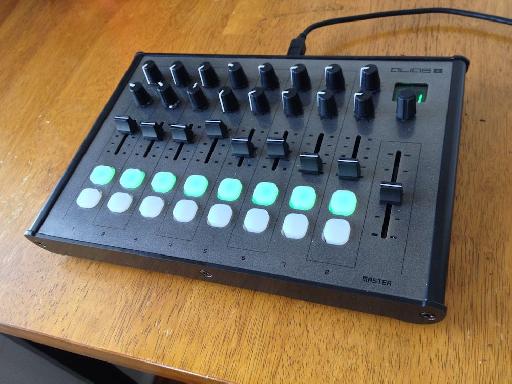 Alias 8 in all its glory.

Having reviewed several of the Livid Instruments devices at this point, I'm quite familiar with the quality that they regularly produce. And, as I hadn't even seen, or heard of this device before it landed on my doorstep, I really had no idea what to expect. Well, not true, what I expected was another tank-like controller.

What arrived was far from what I expected. True to the advertising I've read since pulling the Alias 8 out of the box, this device is truly more portable than anything I've seen come from Livid. It is exceptionally light, so you backpack studio engineers will appreciate the fact that it doesn't add more weight to your rig as you walk towards your DJ gig, or the coffee shop.

And, initially, it was the lightness that threw me off. It's easy to say, at first, that the build quality is like any old portable MIDI controller. However, as you get used to its knobs, faders and buttons, you quickly realize this is not the case.

The pots are ultra smooth, and firmly attached. You will not easily remove any of these, even if you wanted to. And, in fact, they are the same pots used by all other Livid Instruments. This is also true for the buttons. They have a nice feel, and are recessed firmly inside the aluminum chassis.

The faders were the only thing that I felt a little concerned about, as I placed the unit within my backpack. But with the way the pots are positioned, it appears that the unit is rugged enough that it would be difficult to damage a fader in transit. The pot placement seems to buffer a little bit of contact. And, after playing with the faders, they too seem to be firmly rooted, even if they are a little wobbly horizontally. Regardless, these are faders that have been proven time and time again, I'm not too worried.

There is also one encoder that can be used to shift between different MIDI channels, and can also double as MIDI assignable knob as well. This feature is actually much nicer than it sounds, as you'll see moving forward. 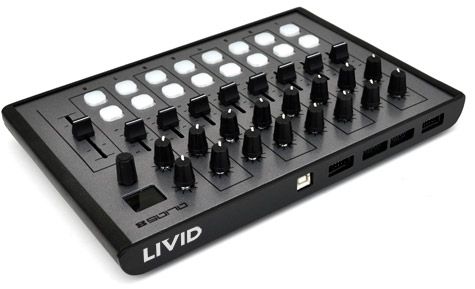 The back of the Alias 8 reveals the XPC Controller Ports.

As I mentioned earlier, this controller just looks like a mixing console from a distance. And, as I hinted earlier, looks can be deceiving. Really, like all Livid devices, you can assign any knob, or any button to do pretty much anything, as it's just a standard MIDI controller. But, the encoder takes it a step further.

Because you can switch between MIDI channels on the fly, you can actually assign a button to control one parameter when set to one MIDI channel. But, as you switch to a different MIDI channel, the button can be reassigned on the different channel to an entirely different function. The encoder makes it extremely easy to switch MIDI Channels, and because of the display, you can always know what MIDI channel you are working in, and what mode you're in.

Yes, mode. As I mentioned, the encoder can also be set, with the tap of the knob, to become an assignable knob as well. Tap the knob, the display will go from the MIDI channel numbering to display CC, suddenly, this knob is assignable.

The Alias 8 is also semi-expandable in the sense that it has ports on the back that allow you to hook up XPC controller, also made by Livid. These smaller, handheld, supplemental controllers currently come in a few different configurations that include joysticks, more faders, more pots, and so on. But, Livid, being Livid also give you another option, on top of this one. Technically, you could also build additional controllers with the DIY portion of the Livid Shop, allowing you to create custom configurations. Technically, Livid's Elements series would work as well, though you'd want to create an enclosure, if you go this route. Also, the only types of Elements that would work would be analog controller types. Pots, faders, and such would be fine. No buttons, or LEDs.

So, how does a controller that has no form of software, or driver to set up do with my configuration. Actually, quite well. Because there is no software to install, I had to manually map everything in Ableton Live, which is easy. Once I was finished, things really worked wonderfully. The faders, knobs and buttons performed smoothly. And, being able to shift between MIDI channels so easily, really made this controller highly assignable. In fact, I was running out of things to assign. There's just a lot. I found I could designate one MIDI channel for Mixer, one channel for instruments, and so on. I also tried out the Alias 8 in Reason. This was a little different. All knobs and faders in Reason worked fine, but the buttons, because they transmit MIDI notes, instead of CC weren't as usable as I'd have liked. But, because the Alias8 can be reconfigured through Sysex, this can be modified as well. 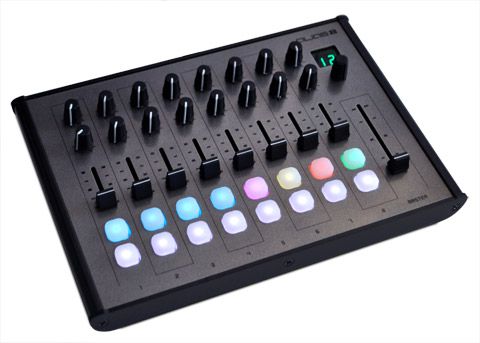 The Alias8 is a real triumph for Livid Instruments. First off, it's at a great price point for a hand made, rugged controller, like it is. The price is currently set at $299. And, though it's small, because of the way the MIDI channels are set up, you actually get several knobs and sliders that go far beyond the physical limitations. And, unlike the other controllers that are out there currently, you can expand it, and you can configure it without the need of having to deal with software.

So, if you're looking for a semi portable controller/console/control surface at a great price, that will last for a long time... And, you support enthusiasts, like yourself, building a product by hand, with love and integrity, this is your controller. Really, this isn't the normal, disposable controller. This is like buying a custom guitar... It's just smaller, and fits in your backpack. When you think about that, $299 is cheap. I hope they will save one for me!

Discover more about Alias 8 on the Livid Instruments website.