Language
Algoriddim's djay 2.5 has received an interesting update for any Spotify subscribers out there. And there's more that just full integration of this music streaming service as Tadhg Leonard discovers.

Integrating Spotify with a DJ app is something I have wanted for a long time. That came in February when the Pacemaker DJ app announced it would be incorporating Spotify along with its 20 million tracks. This was considered by many to be the first step in an iPad DJing revolution. DJs would now have the option to leave their record bags (or more recently USB sticks) behind and instead DJ from the cloud, safe in the knowledge that they had access to a library of music that would suit any dance floor. However, it still wasn't the solution I was looking for. Pacemaker was not without its positives but its lack of hardware integration and advanced DJing features meant it was not really a valid option for professional mixing.

Luckily Algoriddim have jumped to the rescue with a Spotify partnership of their own. djay, with its unintimidating interface, clever syncing features and vast array of FX is thought of as the main competitor to Traktor DJ as the best DJ app available. Therefore it was quite exciting to hear that with the update to djay 2.5 you had now essentially 20 million tracks to play with in a professional mixing environment. Lets have a look at how this integration works in the real world and see if it really is the game changer many people think it is.

The first thing you are going to want to do is load a track onto the decks but with 20 million tracks to choose, it's hard to know where to start. Luckily Algoriddim and Spotify have pulled out all the stops in making track selection an easy process. When you tap the load song button you will see five tabs at the bottom of the screen, each designed to help you choose the next track. 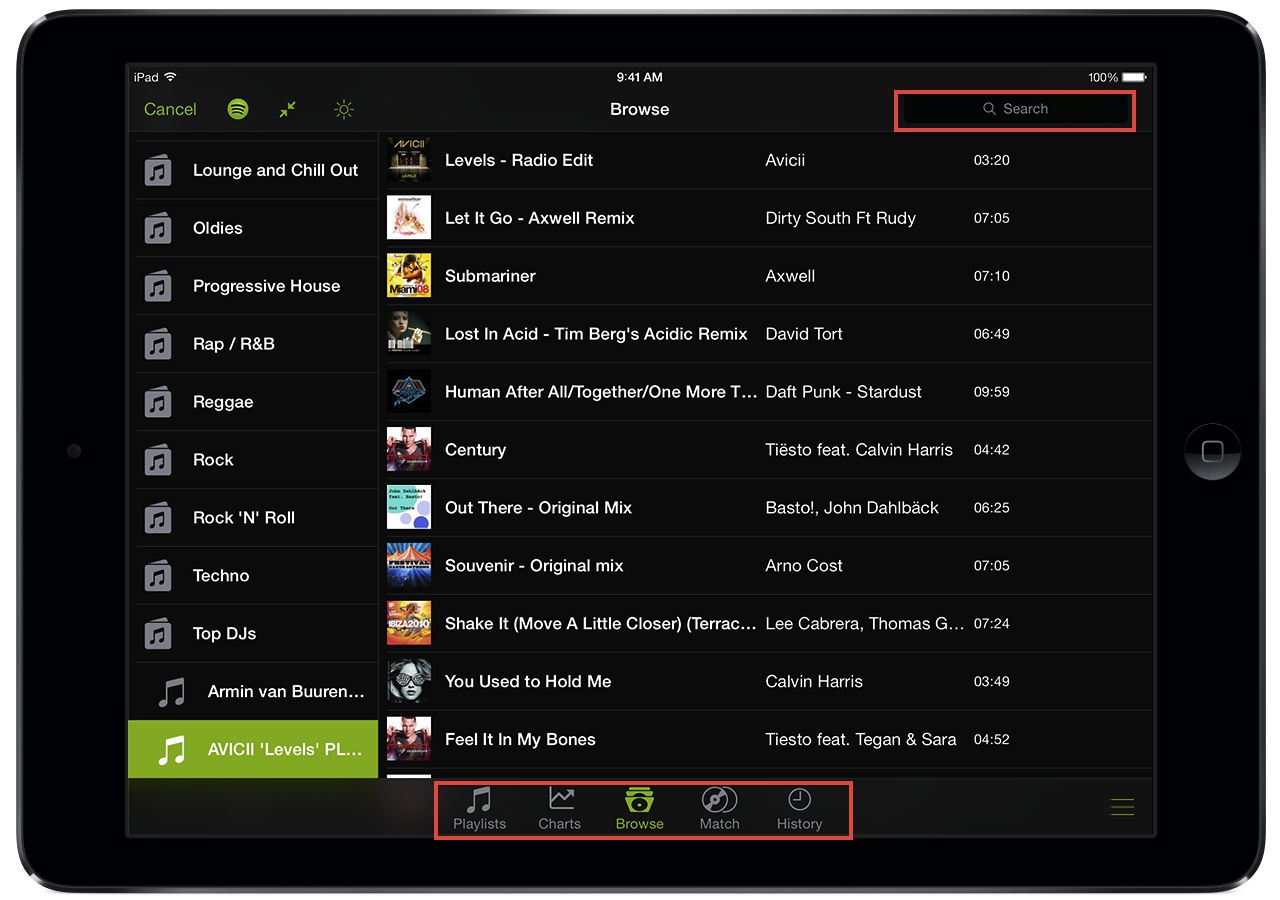 Of course you could use the Search bar on the top left of the screen which will allow you to directly search for one of the twenty million tracks at your disposal.

Firstly, all your playlists that you created from your regular spotify account appear the left hand pane of the Playlist tab. This is ideal for DJs who like to prepare a tracklist before gigs as they can use Spotify on their other devices to build up different set lists.

If you're a DJ that keeps up with today's popular music trends, then the Charts tab should be right up your street.

If you're a DJ that keeps up with today's popular music trends, then the Charts tab should be right up your street. Comprising of Spotify's 100 most streamed songs, the list is updated every day ensuring that you will always be in the know as to what the masses are dancing too.

However, if you would rather not succumb to such commercialism then the Browse tab gives you access to twenty charts of various genres. There is also a Top DJs' chart if you want to see what tracks David Guetta and Co are currently rocking dance floors with. 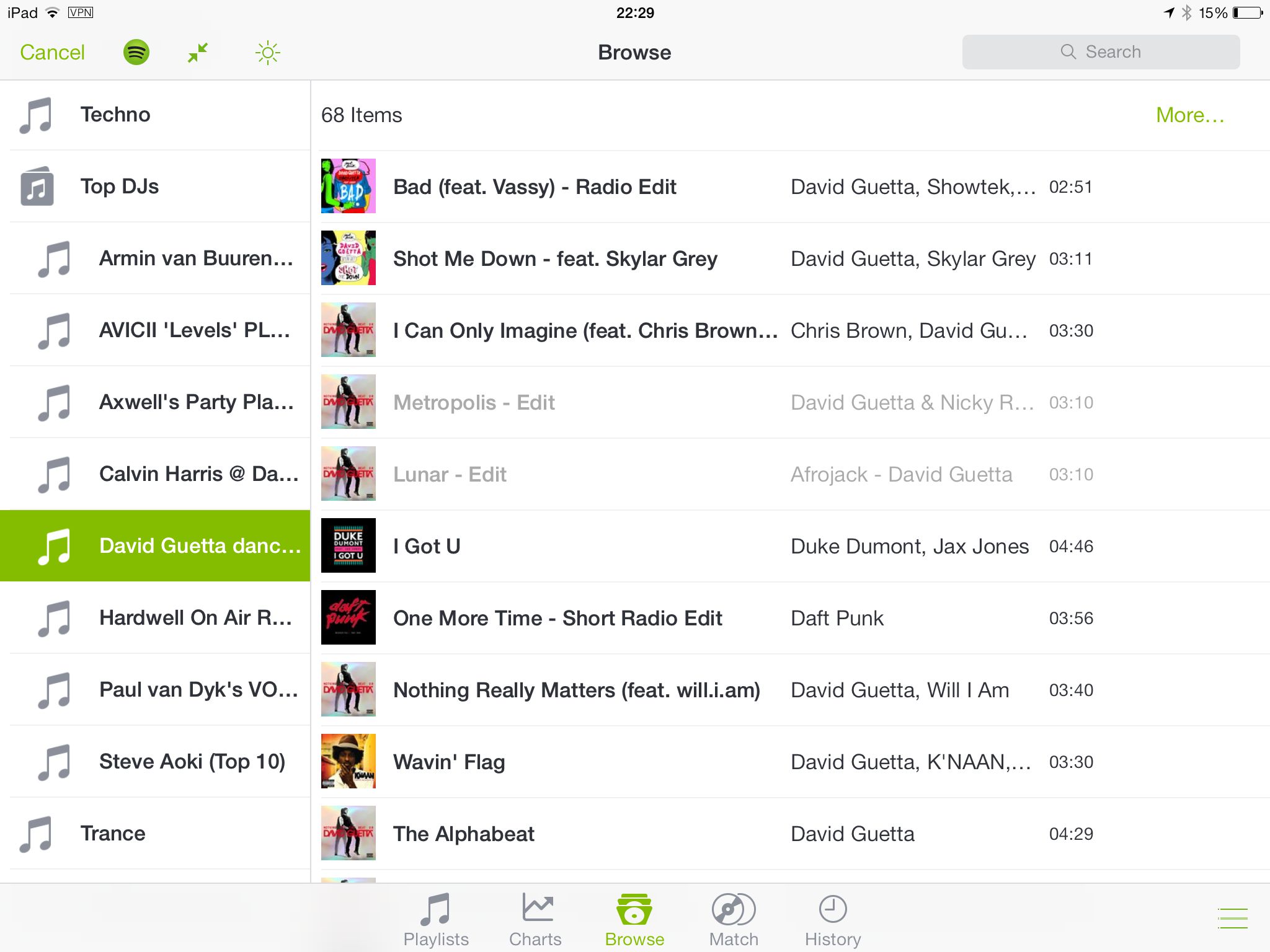 Next up is the Match tab which works in a very interesting way. It is designed to give you suggestions of what song to play next based on the one that is currently playing. Algoriddim have teamed up with Echo Nest Technology to ensure this feature is not just a fad. In fact Echo Nest calculates suggestions based on many different factors including danceability, BPM, key, style and how it mixes with the currently playing track. In practice, the Match function provided surprisingly useful as it presented complimentary songs that I probably would not have thought of otherwise. To preview any of these recommendations long press on the song title and select 'Preview'.

The Queue tab is also quite handy as it grants users the ability to queue up tracks for playing from both Spotify and iTunes (by the way iTunes is still perfectly integrated, should any users be worried that their locally stored music might be given the cold shoulder)

Finally, the History tab is designed to remind you what tracks you have already played in your set should you have forgotten. You also have the option to export your playlists or share them to your social network. Unfortunately you can't record your mixes but with current day music copyright laws that is hardly much of a surprise.

Now that we have our track selected, let's have a look at how well these Spotify tracks perform back in the mixing interface. Despite the fact that the tracks' data is being pulled from the cloud, analysis is just as quick as if it were a track that was stored locally. (Tip: The track will load faster still if you turn Key Detection off in the settings.) The track can even be played immediately before the waveform is fully displayed.

Another nice touch is that the artwork from each track is also displayed onto the relevant deck.

Better still, djay will store all this information within the app itself so the track will be already analyzed the next time it is loaded onto the deck. Of course the hot cues that you created will also be stored. Another nice touch is that the artwork from each track is also displayed onto the relevant deck. 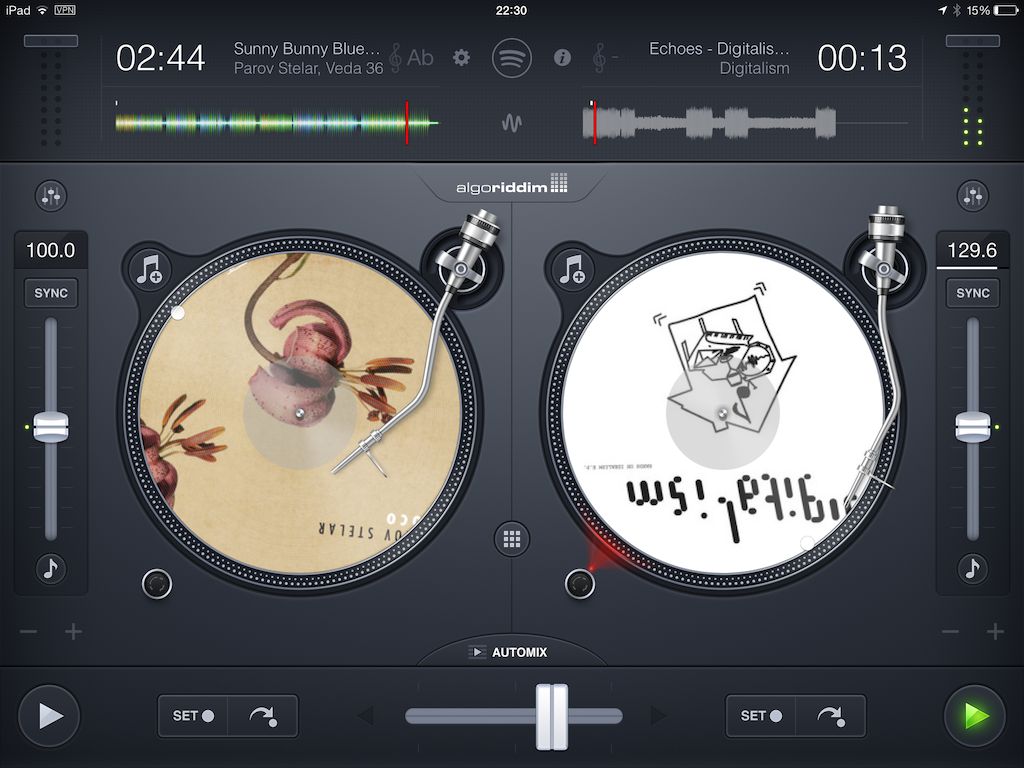 Spotify integration is obviously the main headline in djay's update to 2.5, but it is also worth mentioning that Algoriddim have included some new FX as in-app purchases. Powered by Sugarbytes there are now an additional thirty 'desktop- class' FX to play with, perfectly complimented by djay's excellent FX interface. 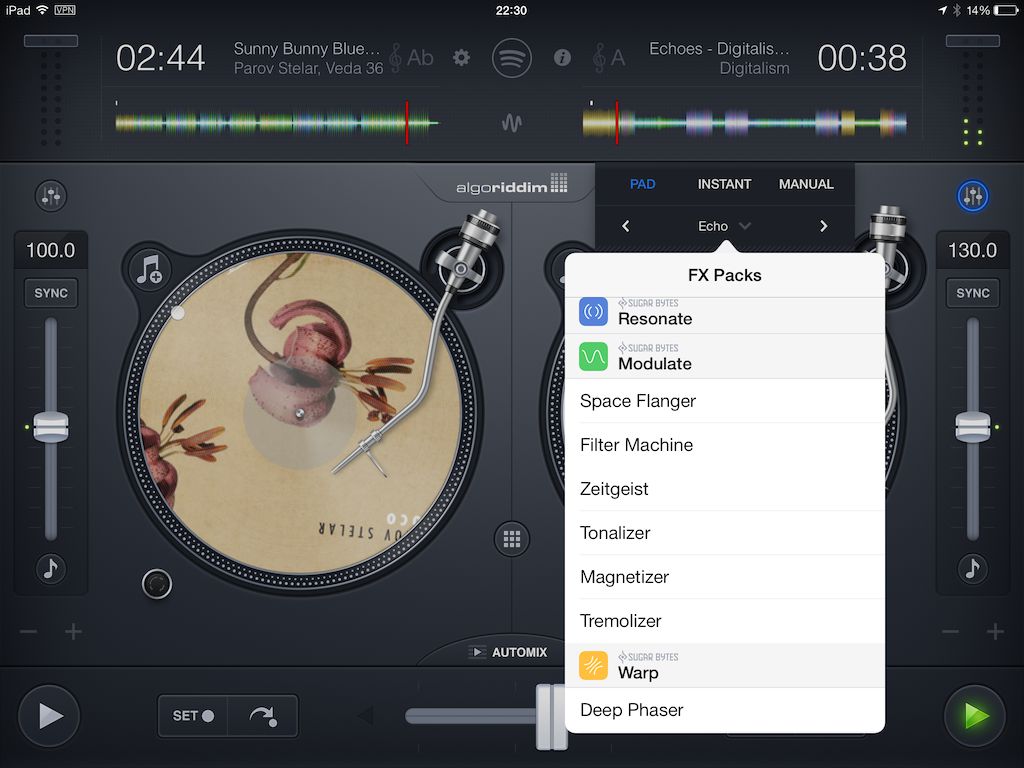 Needless to say I was very impressed with the integration of djay and Spotify. Not only because there is now 20 million tracks in my virtual record bag but also the way in which the app was laid out to make the track selection process very easy indeed. The Match feature was especially impressive and although I don't believe any DJ should depend on charts or various algorithms to choose your next track, there is nothing wrong with having suggestions to browse through.

Also, if you're a DJ who spends a considerable amount of money downloading tracks, then shelling out for djay and a premium Spotify subscription could very well save you a small fortune. It is also worth investing in one of djays approved hardware controllers to give yourself some physical mixing control over a pretty much limitless library of music.