Take the hassle out of ducking, mixing and leveling audio tracks in your Premiere projects with this time-saving audio plug-in. Hollin Jones summons Alex, Audio Butler.

Producing video and producing audio are related but different disciplines. There’s timelines, plug-ins and chopping and scrubbing, but they are not the same. And while a video editor will know something about sound production, they may not be an expert in it, in the same way that a music producer might know a bit about video editing, but it’s not their main job.

Non-linear video editors like Premiere have solid audio processing and mixing capabilities, though nothing like what a full DAW like Logic would give you. In the case of Premiere (for that is what this plugin is designed to work with), the audio side has improved a lot, but it’s still some way off giving the kind of experience a pro audio person would expect.

Bring Me My Audio!

Enter Alex Audio Butler - a VST3 plugin for Premiere on Mac and PC that aims to take the hassle out of the nuts-and-bolts work of ducking and mixing sound for video. It’s a simple but undeniably useful idea - a plug that will automatically level, mix and duck specific audio tracks in a Premiere project based on their contents. 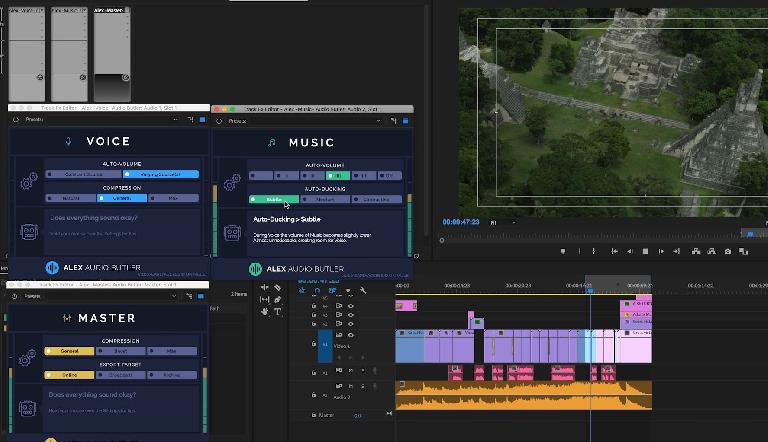 Here’s how it works. There’s a little fiddling initially re-scanning your VST folder after installation (this is Adobe’s fault as they still don’t really prioritise audio tools in Premiere) and then when you’ve input your activation code, you load up an instance of Alex Audio Butler (henceforth referred to as ‘the plug’) onto an audio track. It has three versions - Master, Music and Voice. These are the three main kinds of audio tracks you might typically have in a Premiere project. Of course you might have multiple voices, several foley or ambience tracks, in which case this tool would probably work better if you sub mixed them down to a more manageable selection of just a few main channels. UPDATE: The developer got in touch to tell us that a new module geared towards sound FX / ambience will be added in the near future. 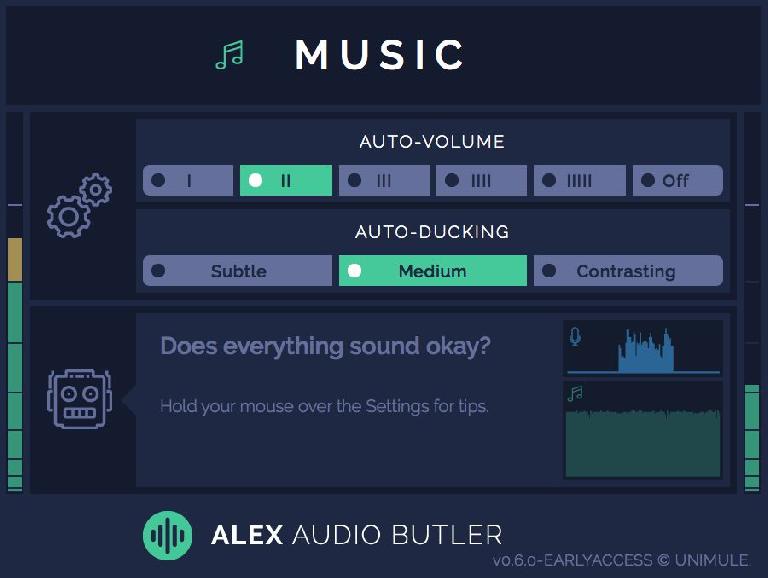 It apparently uses AI to listen in the background and work out what should happen to which tracks, at which point. The trick is to assign the plugs correctly so that they know how to treat the signal they receive. They use a combination of compression, gating, sidechaining and limiting (I’m guessing) to do their work. So by assigning “Music” to a music track, you can control the amount of ducking - the music getting out of the way whenever the voice appears on another track. You can also control auto-volume level. On the Voice plug there’s controls for compression amount and what kind of source it uses - is it one voice or several for example. It also seems to pull quiet voice clips up automatically, which is helpful 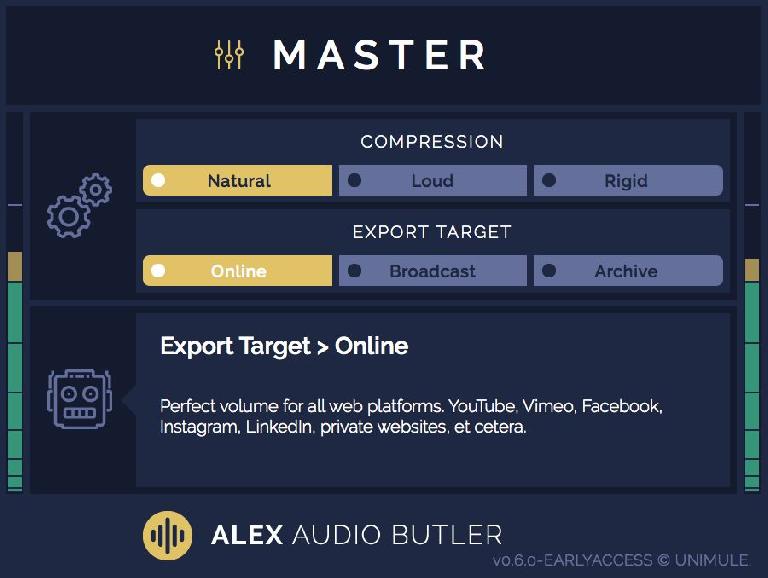 Finally the Master version of the plug has a compression amount control (three buttons) and an export target setting - Online, Broadcast or Archive, which I’d guess controls the amount of limiting going on. It’s all pretty straightforward and it works very well - often the default setting is fine and pulls a vocal to the front while ducking the music, and levelling off the master channel to make everything sound nice and glued together. You can see it in action here:

This is a plugin (or three related plugins, to be precise) that essentially automates a slightly tedious process for you. Someone with a bit of music or audio post production experience could of course set levels, load a few compressors and automate some music tracks up and down to make room for a voice over - but this does take a bit of time and effort. It’s not hugely complex, but what these tools do is basically remove the need to think about it.

In my tests it worked really well, although it seems designed to work with a simply-defined set of sources. I’m not sure what it would do if your project contained lots of sound effects and other tracks - presumably you’d have to sub mix them down first. Nevertheless, it’s an efficient and elegant solution to the problem of creating smooth-sounding, ducked audio tracks for your Premiere projects. I can see how it would quickly become indispensable to many video editors.

Pros: Elegant solution to repetitive tasks in Premiere. Really works. Default settings seem to handle most situations. Can be customised if you prefer. Quickly mix and duck audio tracks without messing with automation and other plugs.