Language
Who needs a computer anyway? With an iPad and an iO Dock II, Alesis reckons you can do things differently'¦

Alesis was one of the first manufacturers to turn its hand to making a dedicated pro audio docking station for the iPad and the first iO Dock was well received. Time and technology move on of course, and now the company has come up with a second revision, designed to account for changes like the new Lightning connector format amongst other things.

Since the release of the original iO Dock, much has changed in iOS world. Most importantly, an increasing number of audio and MIDI interfaces are becoming “universal” by which I mean that they work with your Mac or PC and also with your iOS device, thanks to class compliance, meaning they don't need any special drivers. So the iPad dock as a concept is no longer the only game in town when it comes to pro recording on the platform, though it does arguably still have some advantages. Not least, the ability to physically hold and charge your iPad during use, and the fact that you don't need Apple's Camera Connection kit which you mostly still do to connect USB interfaces. 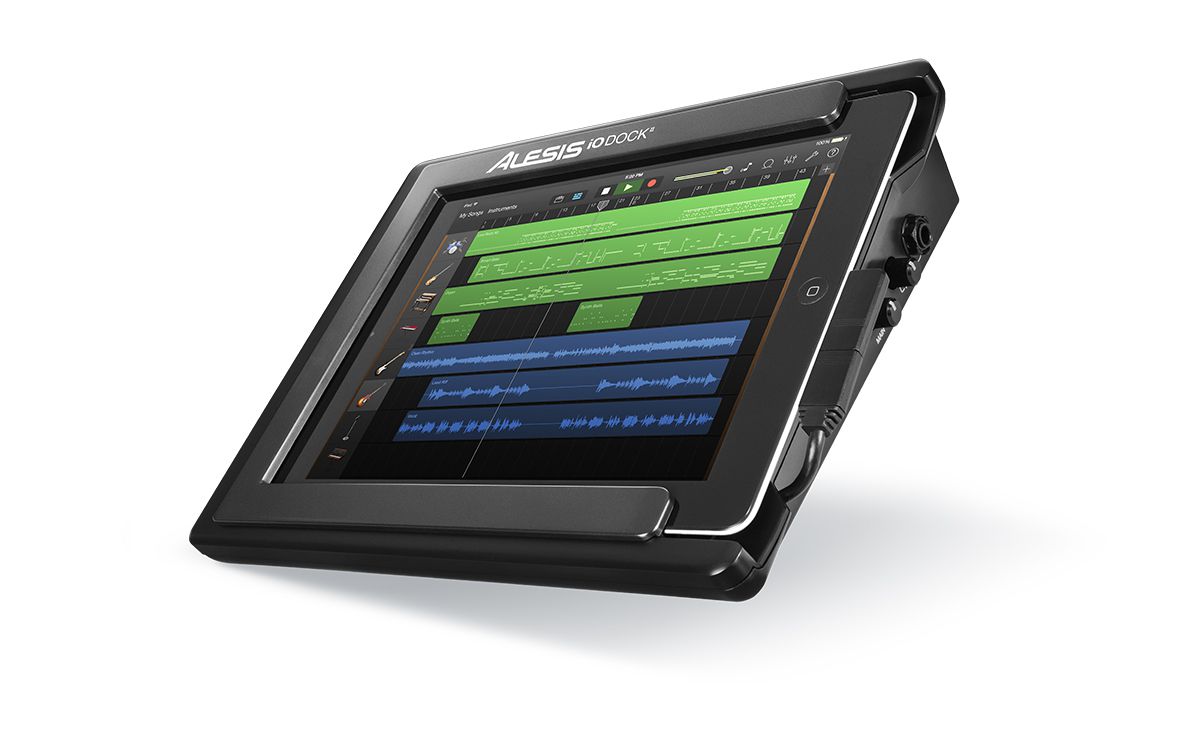 The iO Dock II is physically quite chunky and feels like a serious piece of kit, though it's not too heavy. It has an external PSU which provides all the power you need as well as rubber feet to stop it sliding around. All models of iPad from the original through to the iPad 4 are compatible with the slider tray system and will be held securely in place thanks to the removable insert which adapts for the different thicknesses of the different models. A protruding connector cable has swappable 30-pin and Lightning connectors to cope with the 30-pin of iPads 1-3 or the Lightning of the 4. This is handy, though you'll want to be careful not to lose the removable attachments.

You'll notice a significant omission from that description: the iPad Air and iPad Mini. Although you can physically connect these models via Lightning, they won't be held securely in place because they are too thin (and too small in the case of the Mini) for the adaptor. This is quite an issue, and unless Alesis offers an adaptor for the iPad Air at the very least, it's going to render the iO Dock II a bit pointless for owners of the newest iPad models. You operate an iPad by touch and if it's loose, it moves when you touch it. Focusrite's iTrack Dock takes the opposite approach, with no support for 30-pin iPads at all, but a movable connector for any Lightning iPad, and a casing that allows both large and Mini models. 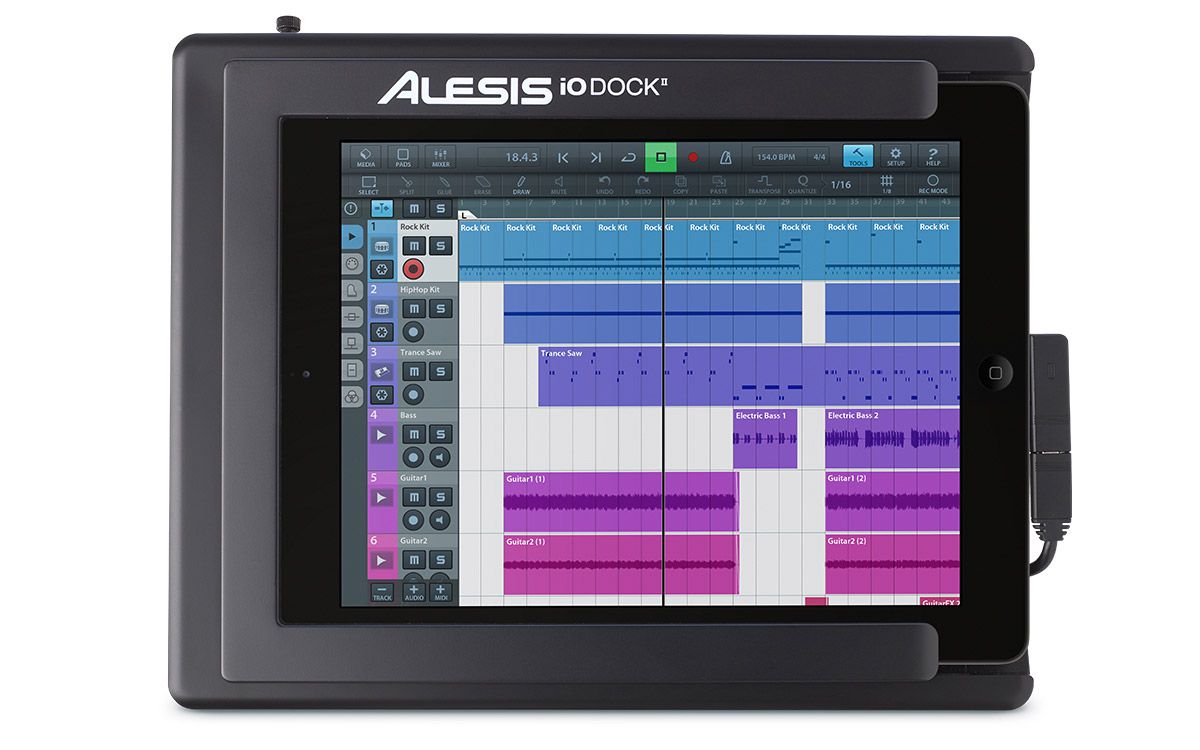 If you do happen to have an earlier model of iPad—and a large number of people do, given that iOS 7 runs on the iPad 2 or later—you'll find that it fits snugly into the slider tray and is powered by the dock. The audio and MIDI ins and outs on the unit are all routed to the iPad and thanks to the widely supported CoreAudio and CoreMIDI frameworks, there's virtually no setup, with the device appearing in your app of choice.

On the rear panel is the majority of the connectivity and you'll find two combo XLR / jack inputs with phantom power and gain controls, one of which is switchable for guitar and mic / line operation. There are stereo jack outputs for connecting speakers, a direct monitoring button which is great for eliminating latency during recording, and a footswitch input with function assignable by whatever compatible app you might be using. Inside, the unit uses professional 24-bit converters which sound great. There's no longer a video output as there was on the first generation model, but Airplay mirroring is now easy to use if you want to output video, though you will need an Apple TV to receive the signal. It does also make the iO Dock II slightly less of an all-rounder in live situations, as you used to be able to connect it to a video projector. 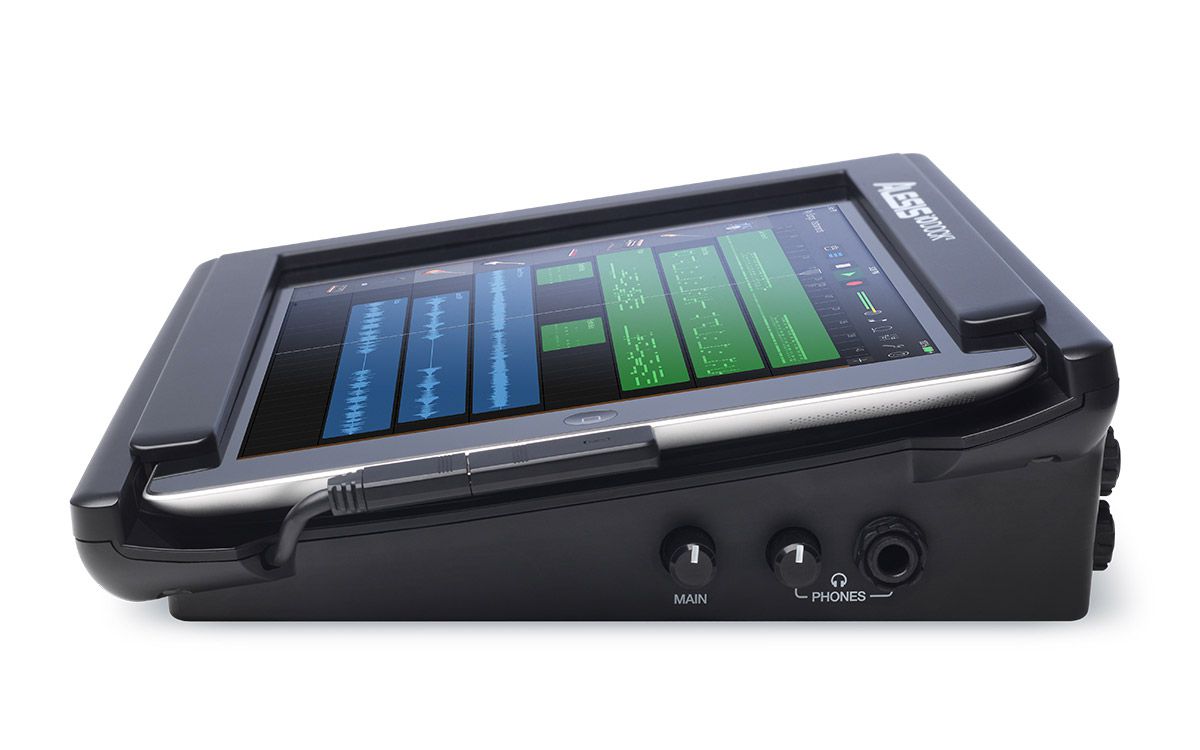 On one side of the casing is a master output volume knob and a headphone out with dedicated volume control. On the other side you'll find conventional MIDI 1x1 in and out and a USB MIDI port. IO Dock II also now fully supports Sysex, something more advanced users will be happy to hear. You can connect MIDI hardware using the traditional ports, to trigger external kit using iPad-based sequencers, and trigger instruments and DAWs running on the iPad from MIDI hardware or using a USB-based MIDI controller to fire data in. USB MIDI devices are very common and they're a better way to record beats, melodies and other parts than tapping on a screen. Slightly bafflingly, the USB port doesn't provide power to your MIDI controller so you'll need to plug it in to the mains separately. 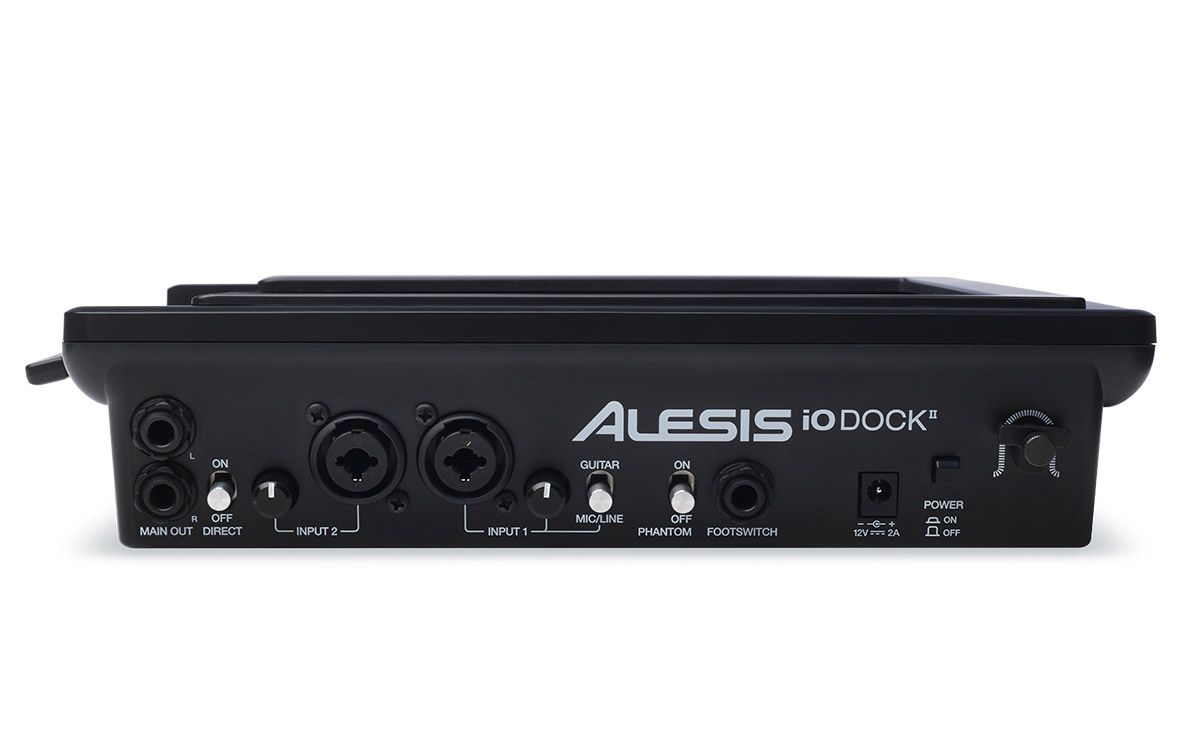 As far as audio recording goes, everything ran smoothly when I connected a guitar and a condenser mic and put down some tracks in Cubasis, Auria and GarageBand for iPad. There are only two simultaneous inputs but this is often enough for many iPad musicians and Alesis also makes the iO Mix, with four inputs, if you need more. The direct monitoring option is very helpful when tracking as it feeds your input straight back to your headphones, eliminating latency. Additionally, IO Dock II has improved guitar circuitry over it's predecessor which allows for a higher input gain and gives recordings a little more warmth.

The iO Dock II is a great way to record audio and MIDI on your iPad but it faces increasing competition, and has some limitations. The current lack of physical case adaptors for the iPad Air or Mini limits its appeal to owners of previous iPad models, though there are still many of these around of course. Although you can plug your Lightning Air or Mini in, and it'll work perfectly, it won't be held securely. It might also have made sense when considering video out to have replaced the old connector with HDMI, instead of nothing. And USB power to a MIDI controller would have made it a better all-round solution.

With increasing numbers of USB interfaces now offering iPad as well as desktop support, iPad docks are becoming a bit more of a niche proposition. They do have particular strengths: they hold your (compatible) iPad securely, power it and provide a very integrated way to work, as opposed to the trailing cables of a connected USB interface. But without direct physical support for the Air and Mini, Alesis is missing a trick and keeping its otherwise very solid iO Dock II looking backwards rather than forwards.

lostinthesound
Those are some truly dealbreaking cons listed. The lack of ability to power USB devices is hugeâ€“the majority of MIDI keys don't include AC power, it typically must be purchased separately. I'm curious as to why this (and the Air sizing issue) were omitted. They both seem like significant factors that would have justified delaying the production of the Alesis iO2 in order to include. Honest review Hollin. Cheers.