AKAI’s latest MIDI controller has a new keybed, a generous software bundle and a price that may surprise you. Hollin Jones gives you all the details…

AKAI’s MPC sampler and sequencer hardware was pivotal in creating the sound of much 90s hip hop and while its large workstations remain popular, the company has more recently turned its attentions to creating a more portable range of MIDI controllers. The MPK Mini Mk 3 is the very latest and it’s fair to say it packs a great deal of punch into an incredibly portable package. Not only that, the bundled software and price make it sorely tempting not only for beat-makers but for anyone who wants an on-the-go controller with a bunch of cool features too. 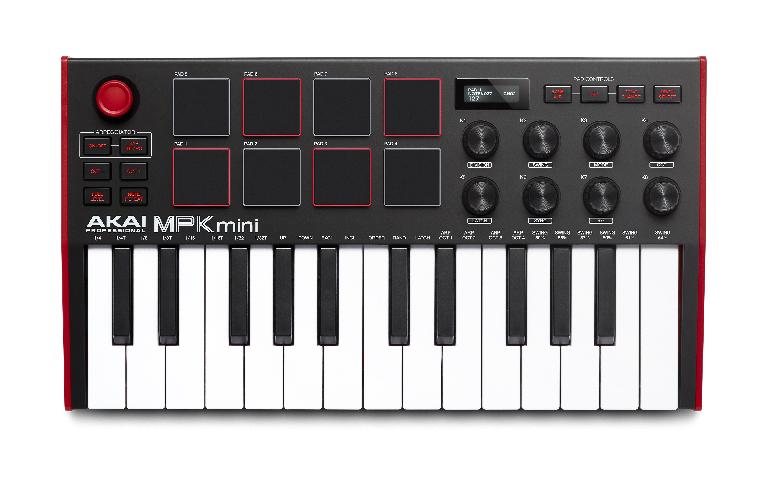 The unit itself is very well built but feels portable enough to carry easily alongside a laptop. Power and data are carried over a single USB cable - a USB-A to USB-C cable is supplied - and on the rear there’s also a sustain pedal input, which is a nice inclusion for such a compact controller. The red and black livery immediately identify it as a member of the AKAI family (three colour schemes are available). The keybed is a newly designed “second generation” type and the 25 keys offer a good deal more responsiveness than you might expect for their size. Small keys are never going to let you play piano concertos all that expressively, but for the kinds of performance you’re likely to be doing here, they are more than adequate. 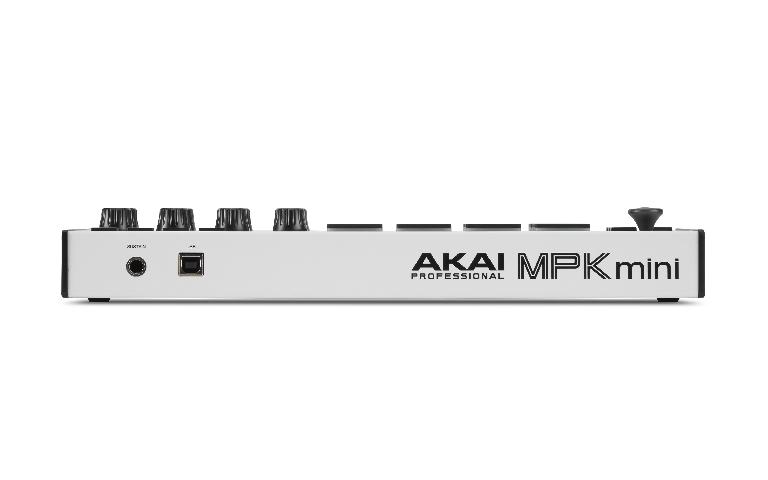 You download the MPK Mini Manager app to register and manage your downloaded software, of which more later. The hardware is class compliant so there are no drivers to worry about, and although it’s designed specifically to work seamlessly with the MPC Beats software, there are also a number of DAW modes that you can activate for Logic, Live and more by pressing a button combo. It’s not entirely clear at the time of writing exactly how controls are mapped across from the hardware to the chosen DAW when you do this. Obviously the basic stuff like keys, arp and pads still trigger notes, and there’s a program editor app where you can build custom MIDI setups pretty easily using CCs and values of your own, so it’s very customisable. Still, a little more clarity about DAW mapping would be welcome. 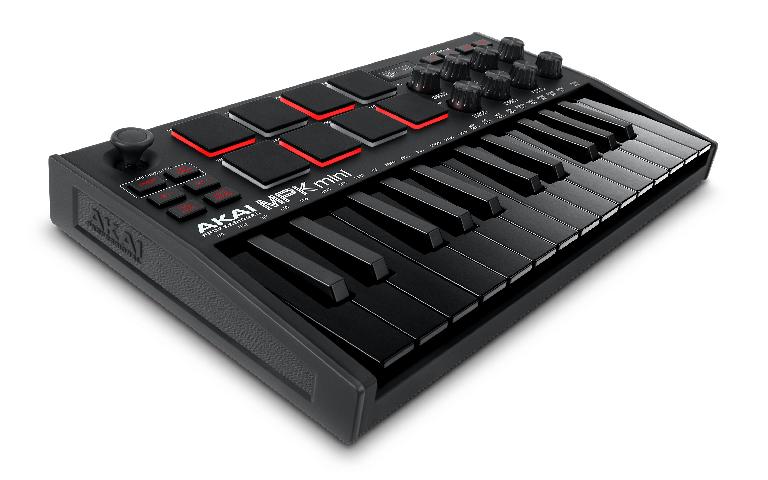 There’s a new OLED display that gives you visual feedback about the CCs, program selection and other parameters that you are working with and this is a great help with keeping up with your movements. This being an MPK, you get 8 backlit performance pads with note repeat and full level functions for creating the kinds of beats and sequences that AKAI is known for. There are also 8 endless rotary knobs that can be assigned in any MIDI software and also have secondary functions related to the arpeggiator and keyboard like swing, octave, sync, latch and more.

Speaking of control, the Mk3 makes good use of secondary functions across its keyboard as well. Each note is labelled with a quantize or swing value or one of a selection of other settings. These fairly quickly become second nature to work with during performance or recording. Another cool performance feature is the omnidirectional joystick for pitch bend or other CC changes that saves space in comparison to an actual pitch bend wheel. The Pad Control section contains buttons for program changes, bank A/B selection and more. A quick read of the getting started guide when you’re getting up and running will familiarise you with the operation of these, after which they are pretty easy to work with. The performance experience overall is very good, and you’re able to get maximum creativity and control out of an incredibly compact unit, whether you’re playing simple sequences or getting involved in more advanced, pad and arp-based programming. 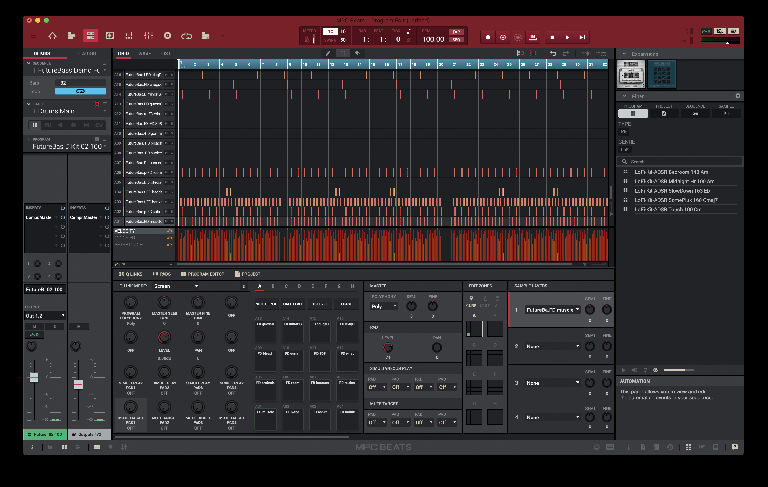 Performing beats, notes, rolls, melodies and sequences from the hardware is accessible and fun, and it’s most at home when connected to AKAI’s bundled MPC Beats software running on your Mac or PC. Compatible with many of AKAI’s controllers, this lets you record and edit samples and of course sequence and mix, plus it can load VST and AU plug-ins as well as being available itself as a plug-in inside your DAW of choice. As with any DAW it has its own layout and workflow but it does really reward being paired with the MK3, designed as they are to work seamlessly together. It’s very much geared towards making beats and loops and could of course be the heart of your production setup, irrespective of any other DAWs you may own. If on the other hand you are heavily invested in Logic or Cubase for example, you can run it as a plug-in. There’s the flexibility to work in either way.

Focusing for a moment on a scenario where your primary setup is the MPK and the Beats software, you’re still going to need some sounds to work with. Luckily there’s a generous software bundle, downloaded and managed via the companion MPK app. You get the “Complete Music Production Starter Kit” which as well as the Beats DAW features AIR’s Hybrid synth, Mini Grand piano and Velvet electric piano as well as a number of MPC Expansion packs. All of these are usable in any DAW too. So you get a great selection of sound sources as well as a DAW, all as you would expect targeted towards beat-making. 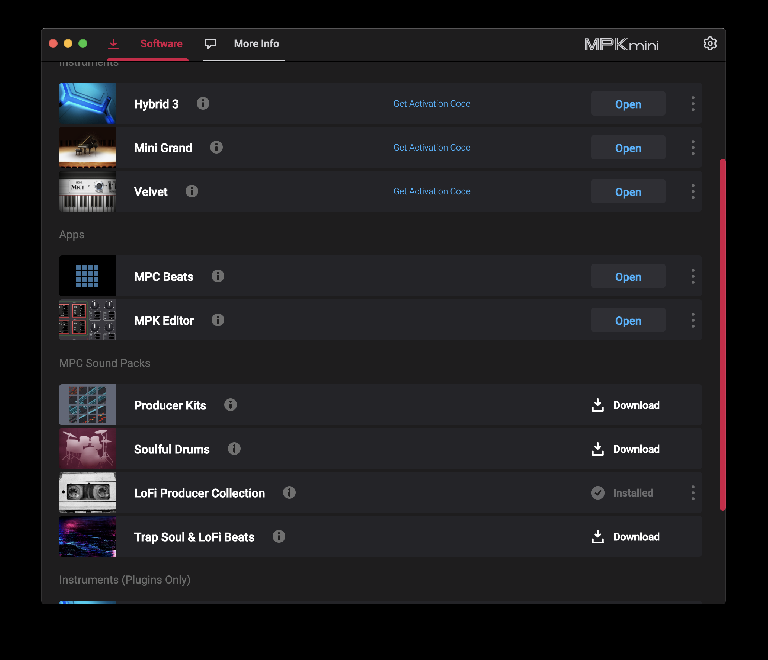 The MPK Mini MK3 is an excellent MIDI controller that incorporates the essence of MPC-based performance and control into an incredibly compact and portable unit. Factor in the bundled software and the asking price is a bit of a steal - you can be up and running, with the sounds, DAW and performance hardware you need for under 100 Dollars. For anyone looking to get into beat-making without spending a fortune it’s a fantastic option. For those just after a MIDI controller it’s still a great choice, though to get the most out of it you’ll likely want to pair it with the MPC Beats software.

Cons: Mapping to third party DAWs could be a little clearer in terms of what gets mapped by default.