If you needed evidence that the iPad is becoming a really serious alternative both to conventional music hardware and established music software, iMPC Pro might well be the proof you were looking for. It's not so long ago that a real MPC represented a pretty hefty investment for most ordinary musicians. While the hardware still has its advantages, there is now a much more accessible alternative for those who are looking to get into the sampling and sequencing world without making a major financial commitment.

Compatible with any iPad that can run iOS7 or higher (which means iPad 2 and upwards), the app was developed with Retronyms (makers of Tabletop) and is around 500 MB in size, much of that consisting of 1400 sounds by acclaimed sound designer Richard Devine. It has a built in CPU and RAM meter which is a nice touch. It performed very well on my iPad Air but some users appear to report that older hardware struggles a little, so it's worth contacting the developers if this is a concern. 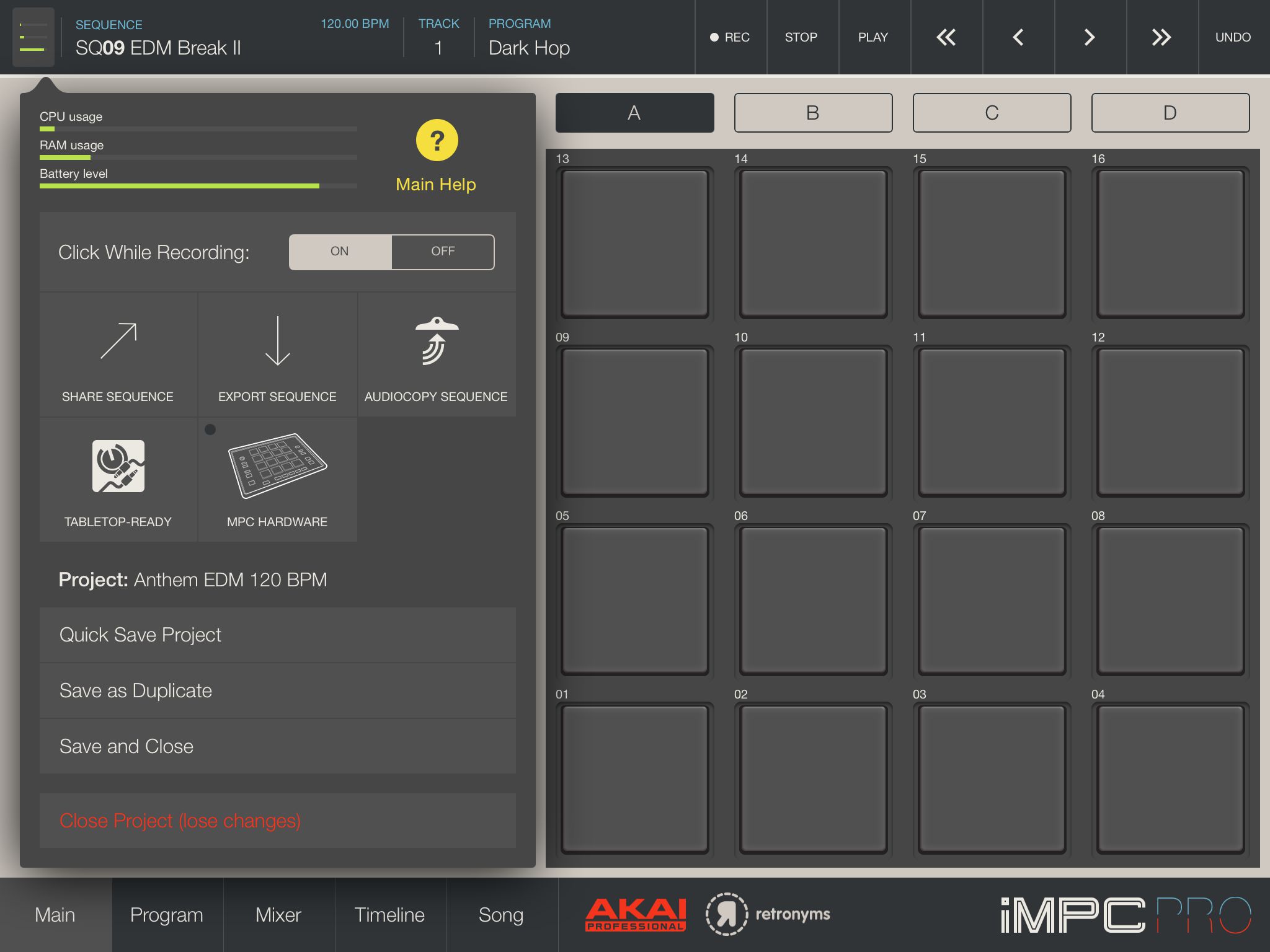 Monitor your resource usage with the handy built-in meters.

Graphically it's modeled on classic MPC hardware and this works brilliantly on iOS, with a minimal but appealing look. The app is broken into five main sections. In the Main section you can access the four banks of 16 pads and on the left there are performance controls. One really nice touch is the effect pad at the top where you can slide and tap to stutter, filter and even do a tape stop effect on your beats. This is great fun to use and perfect for cool-sounding performance tricks. Moving on to the Program section you can make settings for the sound assigned to every pad and so customize your kit, including adding effects and the “Turbo Duck” processor which is an automatic sidechain compressor that sounds awesome on kick drums. 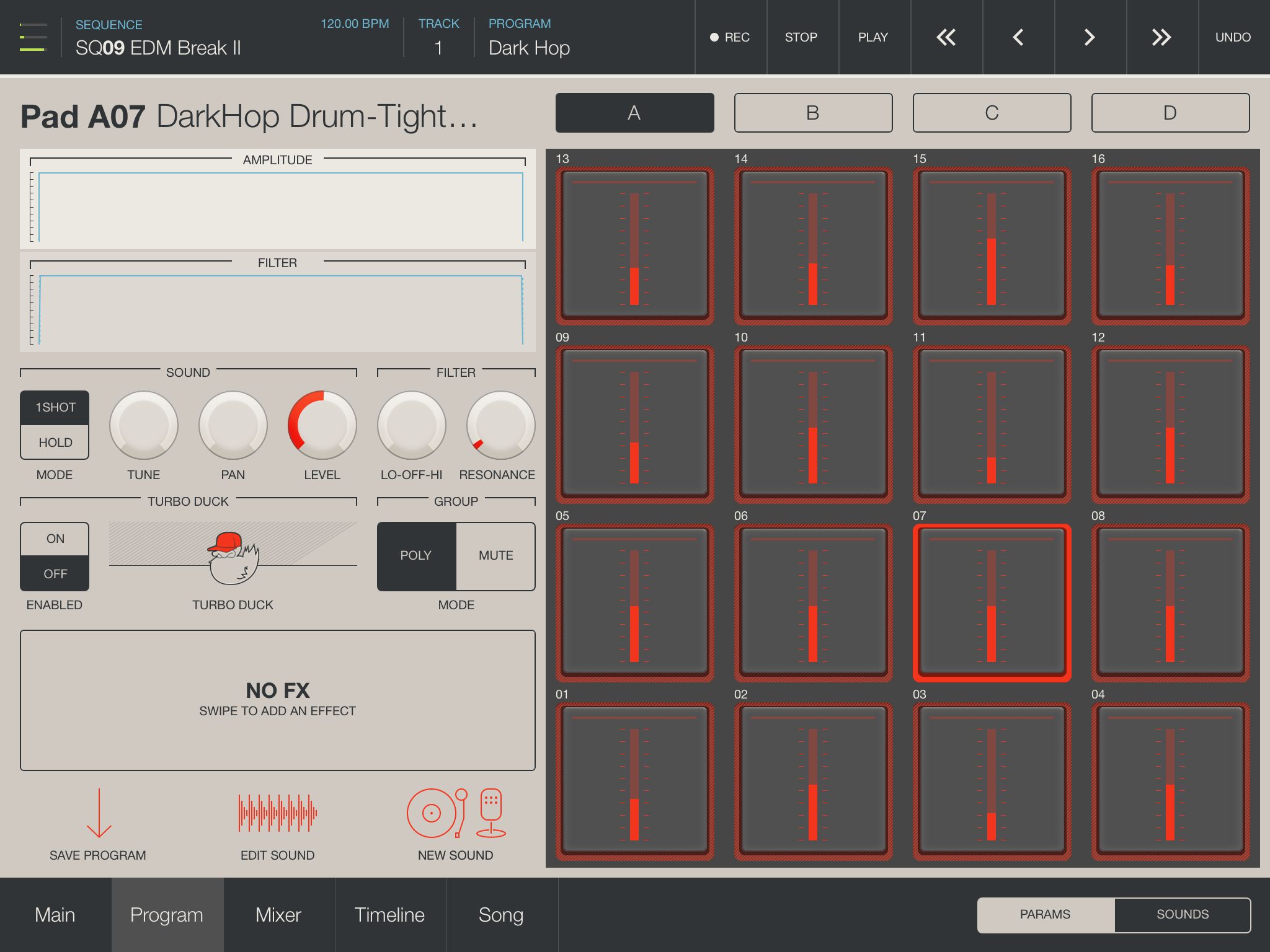 The mixer section gives you access to EQ, mix effects and automatable levels and detailed controls for the effects section. There's a very slick way to interact with the many dials in the app: tap and hold to reveal a much bigger, pop-out display that lets you make more accurate settings. In the Timeline section you can access your 64 channels and enter and edit MIDI notes, with useful functions available by hold-tapping on groups of notes. Finally the Song section lets you make global settings, arrange sequences into songs and share and export sequences. 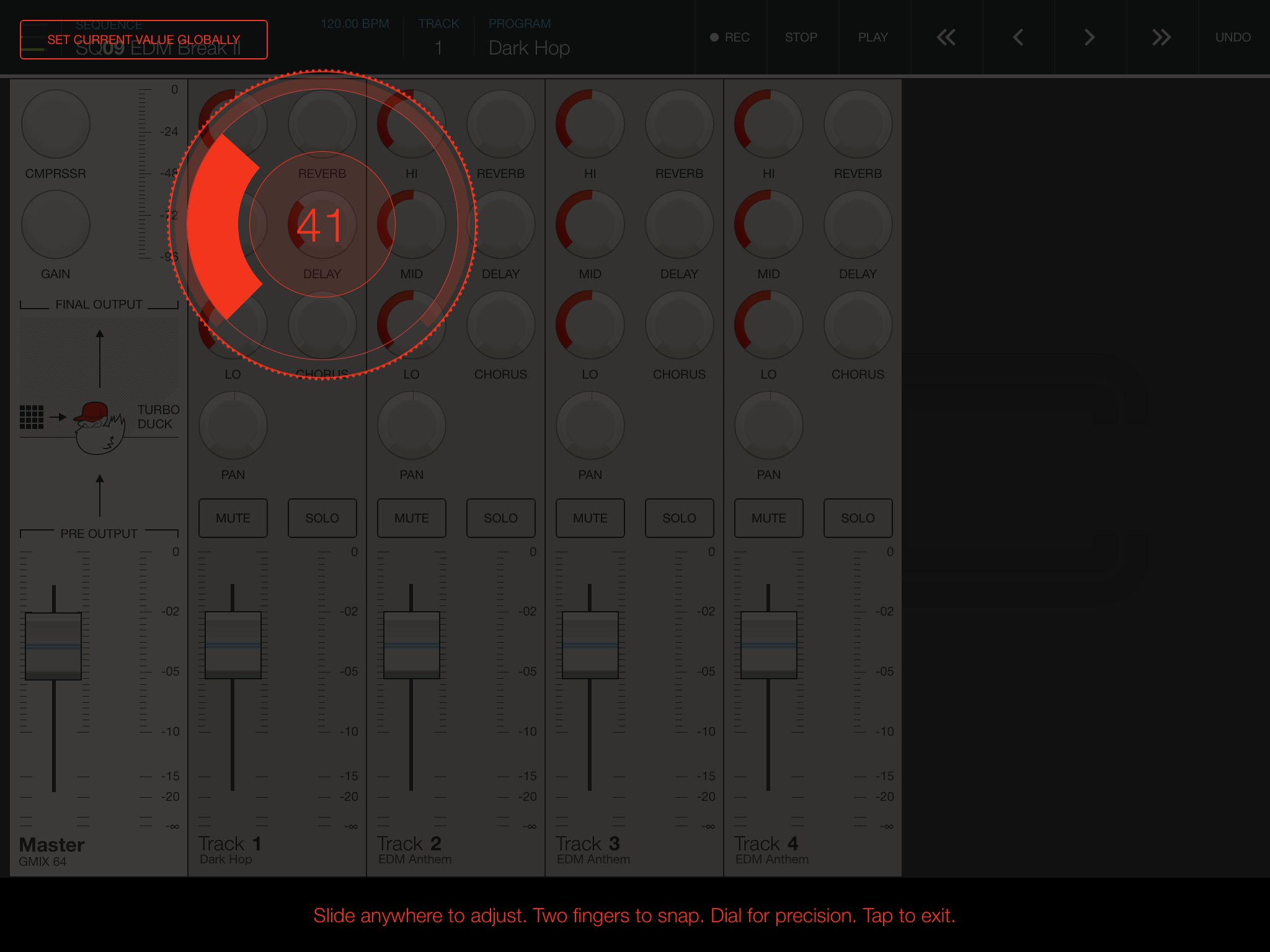 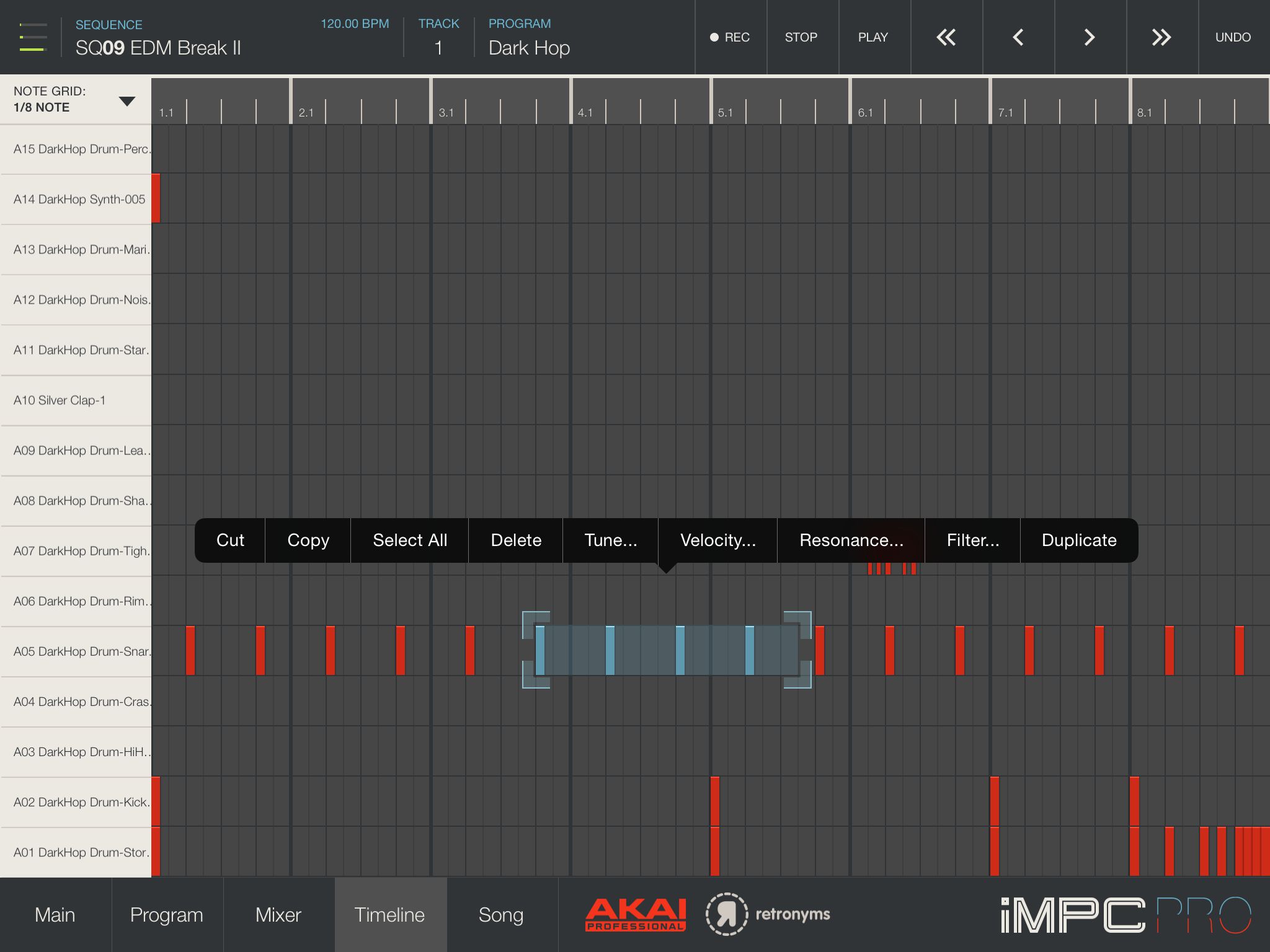 It samples too, and from a variety of sources. Use the mic/line in of your iPad, audio from another app routed via inter-app audio, resample internally or load a track from your music library into the excellent turntable, fully scratchable and with speed control. You can also import regular audio samples and however you record, edit the sounds in a surprisingly well-featured sample editor with fade, reverse, normalize and other audio tools. There's even a button to slice an imported sound straight to the pads and you can choose the number of slices. An undo history feature means you can roll back changes and try different things. 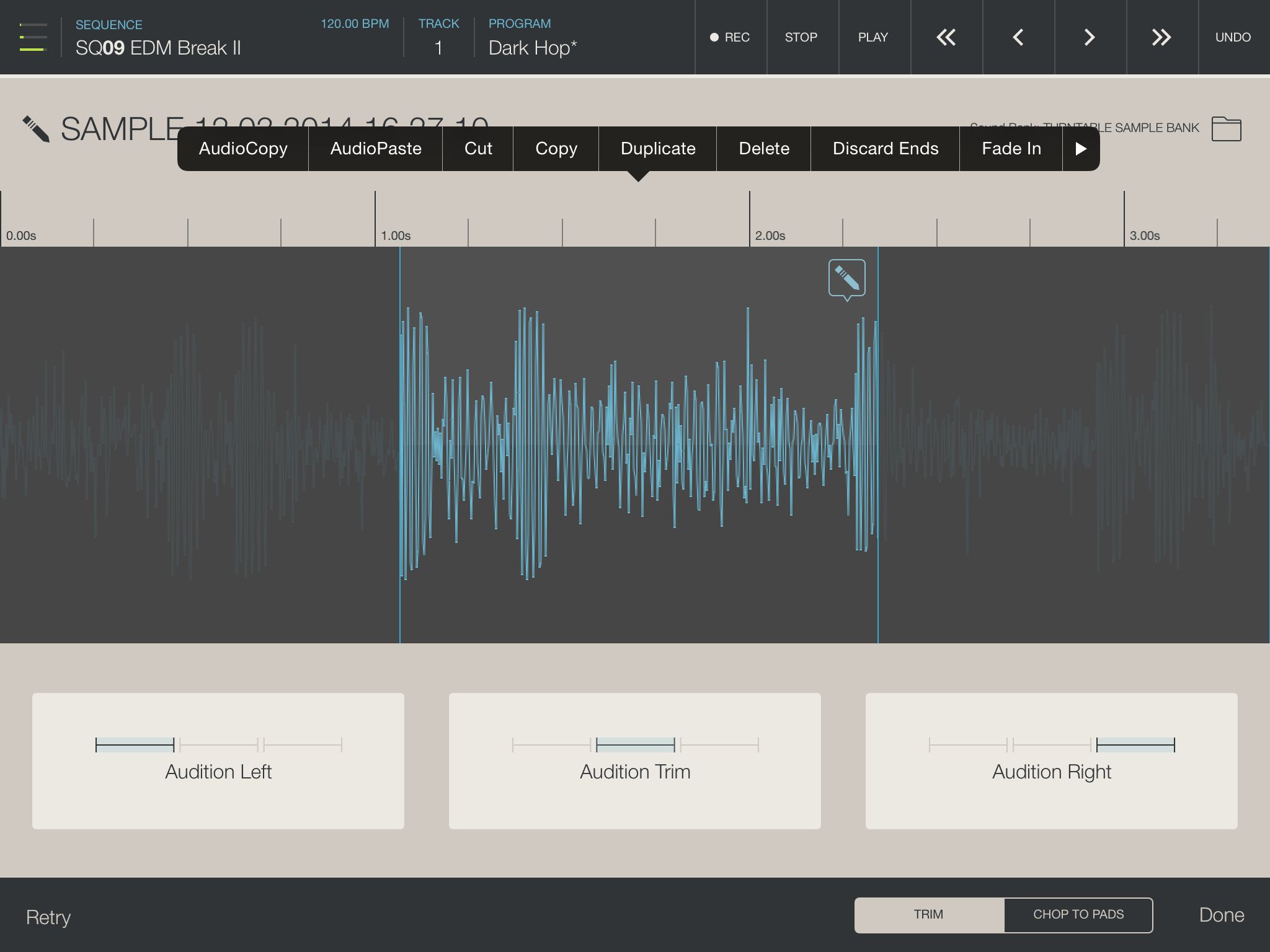 iMPC Pro is a remarkably powerful app that puts the power of Akai's vast sequencing and sampling knowledge at your fingertips. At the price it's an absolute steal and if you're into making beats, EDM or anything else that suits this kind of workflow you're going to find an awful lot to like here. Paired with an iPad dock or iOS-compatible audio interface, this could easily be the heart of your beat production setup.