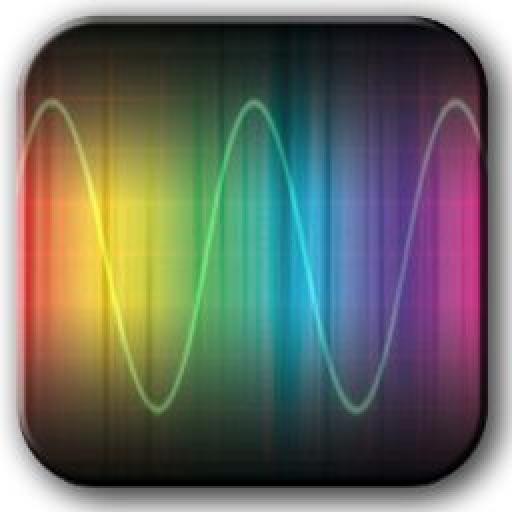 Language
Synths for iPad/iPhone are arriving with increased regularity. Find out what makes the Addictive Synth for iPad shine in this MPVHub review.

Way back in 1988, I saw a demo of a then-new hardware synthesizer called the Technos Axcel, touted as the first realtime additive synthesis system. It featured a huge LED screen that let you interactively draw waveforms and filter shapes directly on the screen and see and hear the results immediately, in realtime. Remember, this was two decades before the iPad. Not surprisingly, at the time such a system was enormously expensive, and not many were made or sold. But I always remembered that demo and how cool it looked and sounded, and how great it would be to have that degree of interactivity in an affordable system.

Now, some 23 years later, VirSyn, the makers of well-known softsynths such as Cube and Tera, has released Addictive Synth for the iPad, which offers many of the same features as the old Axcel in a much more affordable package. Let's take a look.

When you first launch Addictive Synth, this is what you'll see: 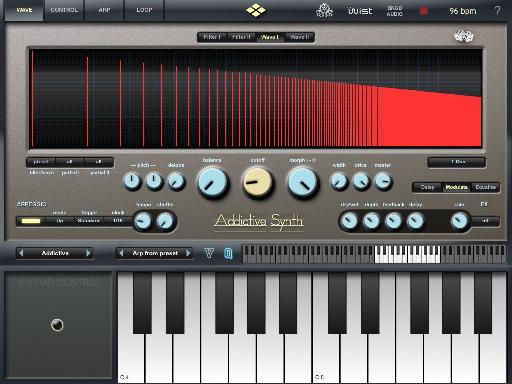 As its name implies, Addictive Synth is at heart an additive synthesis system. Additive synthesis (sometimes called Fourier synthesis), as opposed to the more familiar subtractive or FM synthesis method, is based on the idea that all sounds can be expressed as a series of sine waves, or partials, whose frequencies and amplitudes change over time. It's perhaps the most powerful and accurate way to simulate acoustic instruments or create new ones, but it's also one of the most processor-intensive synthesis methods. Controlling hundreds of individual sine waves' frequencies and envelopes in realtime wasn't very feasible until recently.

But VirSyn has managed to design an additive synth app with realtime touch interactivity, much like the old Axcel. Those vertical red lines in the Wave display represent up to 128 partials in one of two active waveforms in the current patch, and the really cool thing here is that you can just sweep your finger through that wave display to change the relative levels of any of the partials at once.

For example, this track shows what happens when you play a simple arpeggiated preset and just randomly drag around in the first Wave screen, continually changing the harmonic structure of the sound as you do:

Here's the waveform I started with.

Note that the results here aren't at all the same as simply opening and closing a filter - groups of partials are changing at once in a way that would be very complex to recreate with filtering.

Also note the little dice icon above the Wave window.

This is a parameter randomizer, and every screen has one. You can have a lot of sound design fun just stepping through the two Filter and Wave windows in the main Wave screen while tapping the dice, which will give you a huge variety of interesting and useful sounds, as I'm doing here:

You can also morph'"or continuously change'"between the two Waves in the sound, either with the Morph knob in the Wave screen (with LFOs or MIDI controllers since Addictive Synth supports iOS CoreMIDI), or with the X-Y Pad next to the keyboard, all of which can be configured in the Control screen.

That Control screen lets you assign LFOs and MIDI controllers, along with iPad controls like Tilt, to any one of four different parameters, as well as restrict the onscreen keyboard to specific scales.

Presets (Addictive ships with 128 of them) can have their own custom arpeggiation settings, or use one of the 32 arpeggiator presets included with the app. The arpeggiator has its own dice randomizer button, which is as much fun to play with as the Wave dice controls.

All this, along with Addictive's multi-channel loop recorder, built-in Audio Recorder (for capturing performances, with audio pasteboard for sharing with other apps), up to 8-voice polyphony with up to 6 oscillators per voice, extensive effects capabilities, support for internal virtual MIDI connections with other apps, as well as support for Korg's WIST (Wireless Sync-Start Technology)'"so apps can start and stop each other and remain in sync'"make Addictive Synth a great performance and recording instrument, and a great value for $9.99. I recommend it highly.

oddnoise
Good overview. Have initially found Addictive a very good buy and will get under the skin over shortly.