Language
Jay Asher (the reviewer) told us that becoming familiar with Acousticsamples B-5 organ was a case of not knowing that he was unhappy with what he had until he found something better. Read on...

Full disclosure: the Hammond Tonewheel B-3 organ was never my main instrument or one that I owned (I did own and play an M-series) but I did play one on a number of gigs, was in the studio with one many times, and of course, lots and lots of my favorite records featured B-3 players from Jimmy Smith to Billy Preston to Rod Argent to Keith Emerson to Rick Wakefield and on and on.

So to my mind, Logic Pro X has always had a good Hammond organ modeled emulation called the Vintage Electric Organ, previously called the EVB3 in earlier versions of Logic Pro. It sounds good and has a pretty good Leslie speaker emulation.

But Acousticsamples has raised the bar to the point where I am no longer happy with the Logic offering. It is called the B-5 organ and it is a hybrid sample-based/synthesis emulation. And man, it sounds great!

Acousticsamples uses the UVI Workstation 2.6.6 sample player, which is free with the purchase. It may take you a little while to become familiar with the process of loading, saving, etc. which is different than Kontakt or Play (more like Best Service’s Engine sample playback) but it is actually pretty straight ahead after a little time using it. The UVI Workstation is cross platform runs under all the Mac and PC OS of recent years (no Windows XP or OSX 10.6) and is not a CPU hog so any decent modern computer can handle it with aplomb.

You need an iLok account but you can have it on either a physical iLok or a machine license.

Acousticsamples sampled all ninety-one tones of the B-3 while recreating the drawbars, upper and lower manuals, bass pedals, percussion, key contacts, foldback, resistance wires, swell pedal, and all the other tablets and knobs that are on the real deal.

It includes a stellar rotary speaker emulation (they can’t call it a Leslie, but it is a Leslie) and even some amp emulations based on cabinets by Rhodes, Fender, Gibson and others, for rock organ playing, as opposed to the more pure B-3/Leslie sound favored by jazz and gospel players. (BTW, Mr. Hammond never liked Leslie speakers, though they have always been almost universally used with tonewheel organs.)

You can control the rotor speed either from a MIDI CC (it defaults to modulation CC1) or the sustain pedal. You have a way to control the distance of the microphones to the cabinets to add more or less ambience.

You can play different presets on the two keyboards and bass pedals, addressing them discretely by MIDI channels 1–3. You can play the bass either by the pedals or by the left hand.

(The best B-3 player I ever heard was a Boston-based cat named Webster Lewis. He would sometimes play runs on the bass with his left hand while doubling up the most important notes on the bass pedals!)

In Pic 1 you see the main GUI. One of my few complaints is that for my eyes it is rather small and to write this I changed my display resolution to make it larger.  I also wish we could see both manuals in the GUI. See Pic 1. 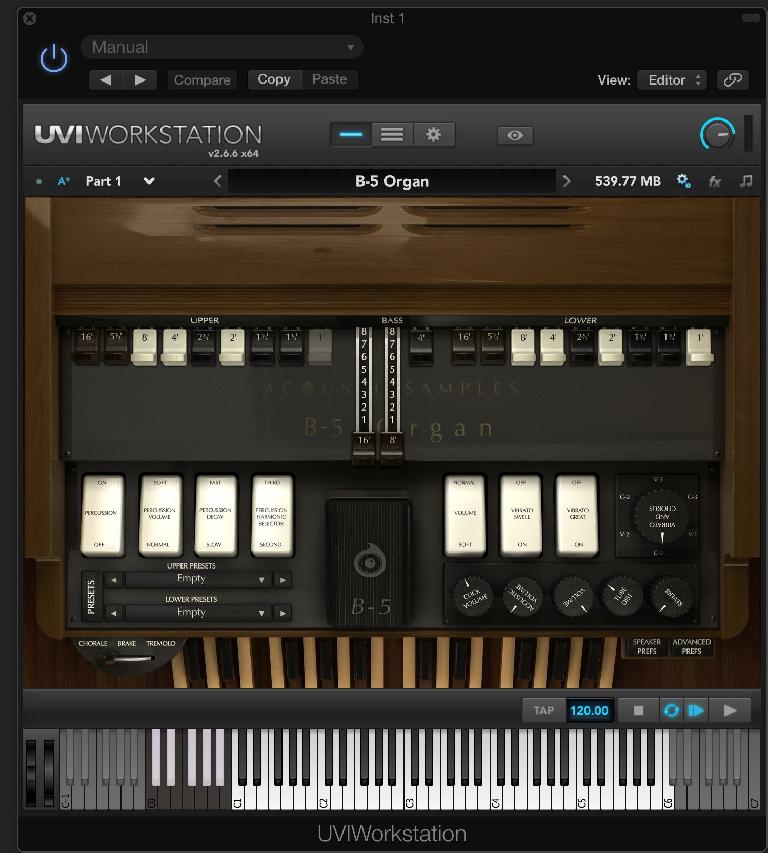 In Pic 2 you see the area where you can choose presets for the upper and lower manuals of the organ.

There are over 200 for each manual and you can scroll through them by pressing the right and left arrows on each or choose them by holding your mouse down on the down arrow, as I am doing in Pic 3. 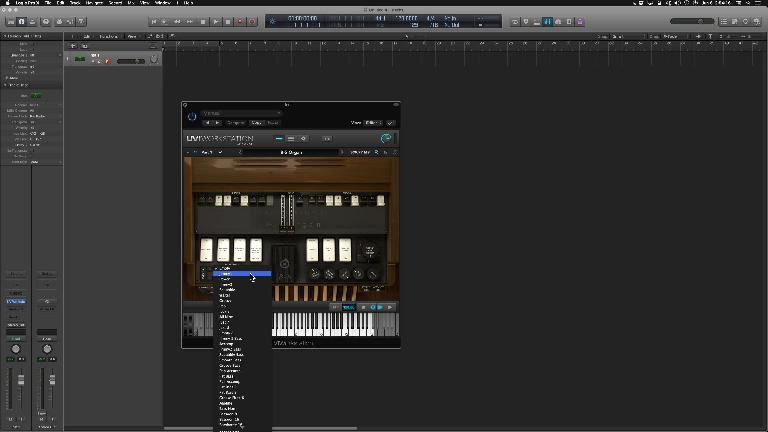 Also, you can create your own and for live use assign them to the twelve keys to see highlighted in Pic 4. And, of course, pulling down on the drawbars works like a real Hammond B-3. 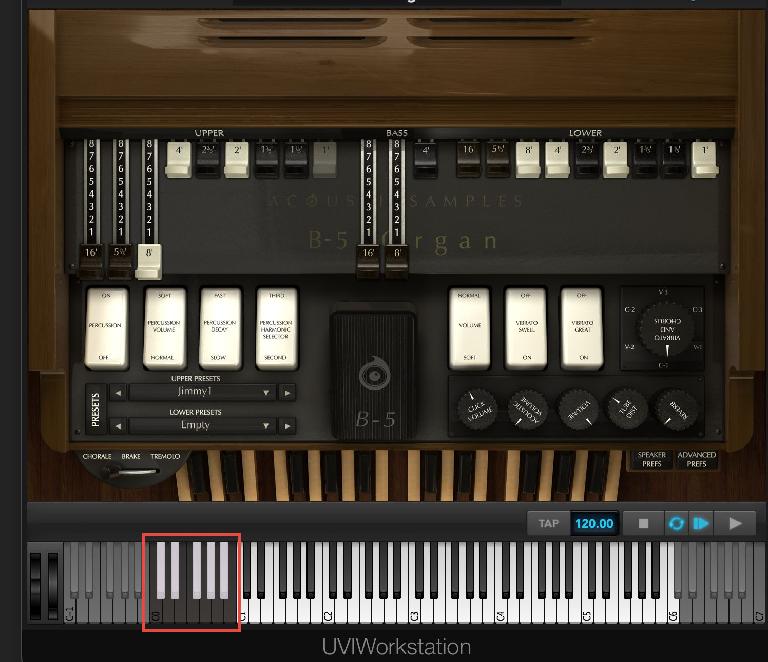 The tablets and knobs all control the sound in the ways a real B-3 does. If you are not familiar with them, here is a link to download a Hammond B-3 manual that will inform you.

Clicking on the area you see in Pic 5 opens up the Advanced Prefs page where you can tailor the behavior of the instruments controls to your taste that you see in Pic 6. 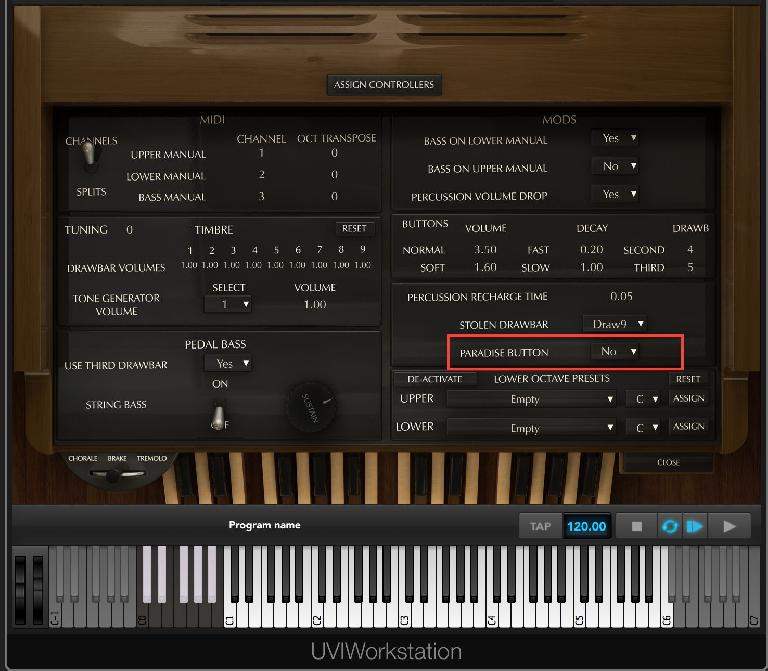 Notice the Paradise setting that I have highlighted? What is that all about? Well, one of the most famous B-3 players was the late Jimmy Smith, a blues and jazz player extraordinaire. It so happens that on some of his famous recordings he played a B-3 on which the percussion feature was not quite working properly as it did not decay and turning on that setting emulates that. Try doing that on a real B-3  ☺

In Pic 7, you see the area to click the Speaker Prefs that you then see in Pic 8. 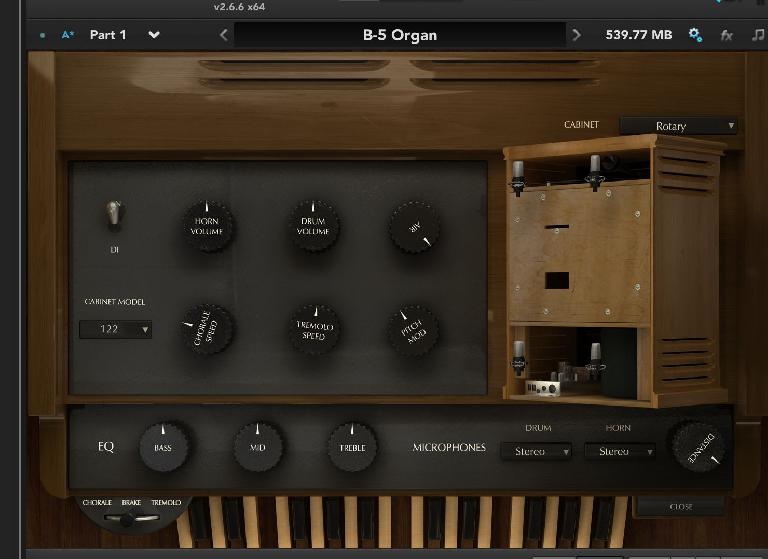 Once again, you have a great level of control here, allowing you to choose between different cabinet models of the Leslie speaker

(I owned a 145)  mono and stereo mics and horns and mic distance, speed of chorale and tremolo to which you can assign MIDI cc control, and even a three-band EQ. See Pic 9. 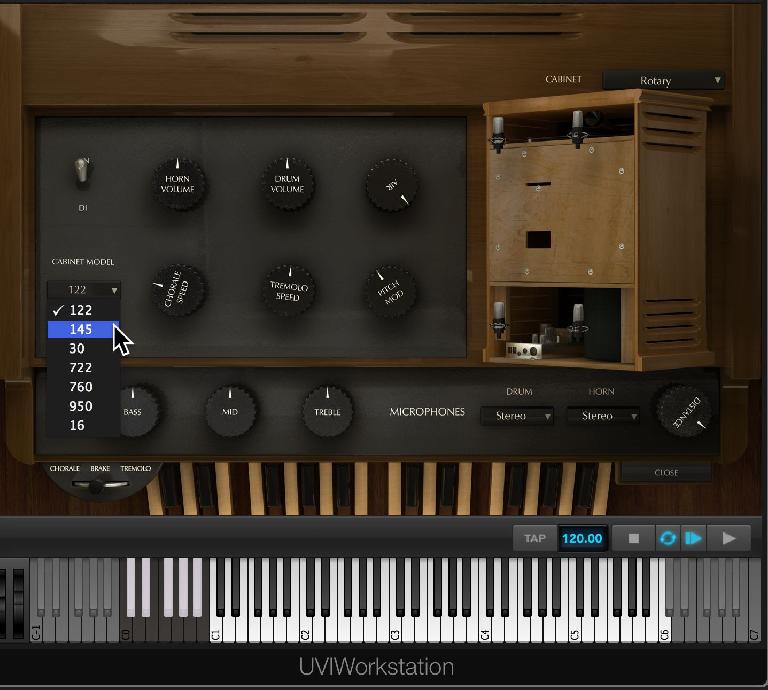 In Pic 10, you can see that I can change from a Leslie speaker to an amplifier, including a switch for the amp to be mic’ed or a D.  I. Box and an “Air” button. 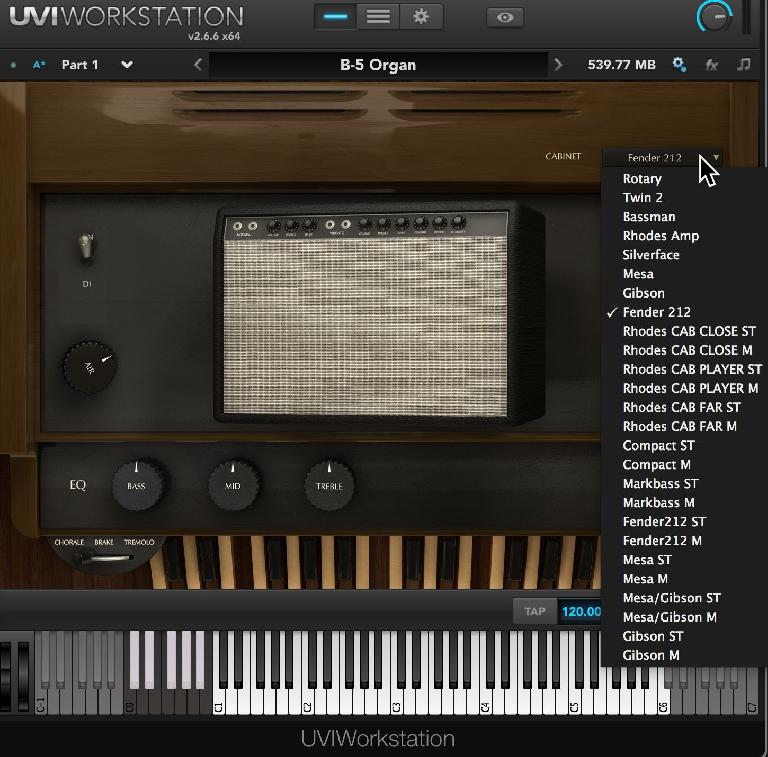 The sound? Judge for yourself, but I love it.

There is also a presentation video.