The Spectral Multiband Resonator from 4MS provides an innovative new spin on the filter bank concept with features like rotation, scale quantizing and a host of other attributes. For someone like me, who enjoys making music using field recordings, this module offers a perfect means to convert noisy material into something musical in an enjoyable and intuitive way.

Filter banks have been around for decades, utilizing the basic concept of reducing, boosting, or completely isolating specific ranges of the frequency spectrum. Dividing audio into separate bands allows for flexible processing possibilities, on both the practical and experimental ends of the spectrum. I really enjoy using Vierring in Native Instrument’s Reaktor, which can step sequence four sweepable frequency bands with controls for attack, decay, resonance, and delay. Could  the Spectral Multiband Resonator open the floodgates to Vierring style processing in my modular rack? 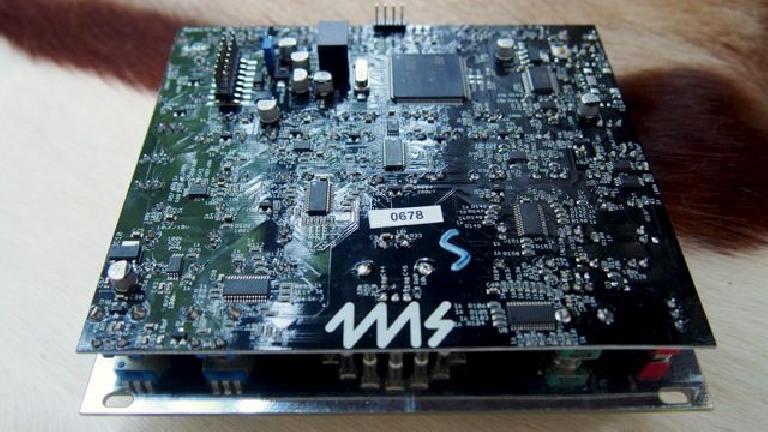 The 26HP layout is logical and clearly defined, but packed with carefully considered functionality. Aesthetically, 4MS has departed from their more esoteric past designs along with their trademark red blue and green color scheme. Their Atoner and Noise Swash had panels that looked like something Hieronymus Bosch might have doodled after a college dorm room mushroom trip. The SMR, on the other hand employs a more clean and utilitarian white and black look, contrasted by a beautiful array of customizable LEDs.

The SMR divides a signal into 6 bands tuned to notes of a scale with sliders to control their individual levels. LEDs at the tips of the faders let you know how much post fader energy a channel has passing through it. The input signal is converted at 96 kHz/24 bit, but without an input signal, digital white noise is generated and fed into the signal path so it can sing standalone. The rotate knob allows you to spin these notes through the selected scale. The rotate control can also be controlled by three separate CV inputs, one in each direction and one bidirectionally. You can also control the spread, or distance, of the notes in the scale and the rate of transition between notes. Notes can be locked to prevent them from rotating, and they can also be nudged to fine-tune them. With the scale rotation switch up, the SMR will even cycle into notes in neighboring scales. This allows you to create anything from complex chord patterns to evolving harmonic washes of sound. The level of the channels can be CV controlled, and each channel sends out an envelope which can be set pre or post and fast or slow with a trigger mode in the center position. This allows the SMR to also function as a 6-band envelope follower. 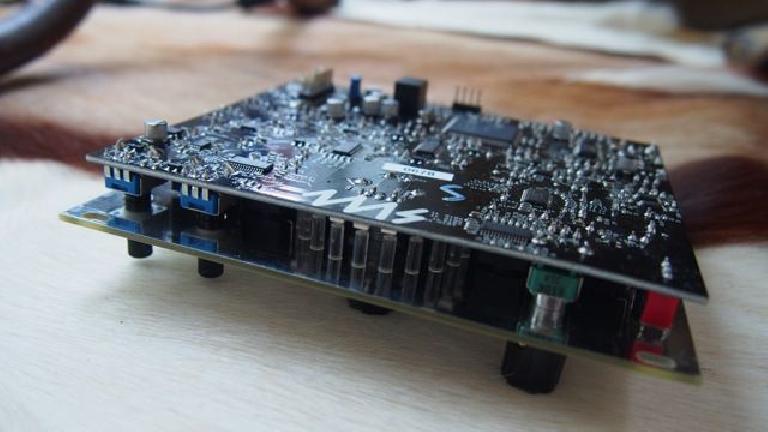 Raising the resonance narrows the width of the bands and introduces glassy resonance at high settings. The Freq Inputs on the left and right will respond to a 1V/Oct signal which allows you to have two separate melodies for all the odd and even bands, or just channels 1 and 6. An alternative filter type is accessed by holding down the rotate button for 5 seconds and then turning the Odds Freq Nudge knob up and down 5 times. 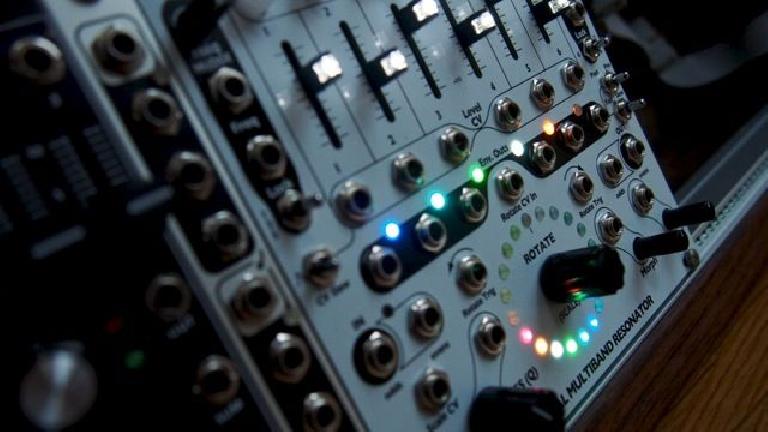 Up close and personal

Holding down the Rotate (Scale) button lets you select from 16 banks, each containing 11 scales. Tapping the button lets you scroll through these scales. By locking channels while changing scales you can use multiple scales at once. Personally, I found the implementation of the banks and scales rather strange and confusing. While I think it’s great that they decided to include more esoteric and exotic scales, I would have preferred more emphasis on boring old traditional meat and potatoes scales. I have lots of respect for Wendy Carlos, but I have to admit I never even considered attempting music using her microtonal Alpha and Gamma scales. Out of the 16 banks, seven use standard western tuning (eight if you include gamelan), one is for user-made custom scales, and the rest are micro-tonally tuned. One bank is set like a graphic EQ, which is quite useful for isolating important bands of the frequency spectrum. I found it difficult to tell some of the bank colors apart, so I found myself scrolling back and forth to find more obvious shades in order to figure out their neighbors.

The documentation for the banks and scales is similarly confusing. For example, the description of the Western scale bank reads: “Just intonation. Each scale contains a root note and one interval, repeated over 10 octaves. Each scale uses a different interval (m2 to M7) and spans 27.5 Hz to 15 kHz”. Even though this is the default bank used by the SMR, there is no documentation on which root notes are used for each scale in the bank, nor which intervals. The approach they took with the Diatonic scales is more in line with what I expected: Starting at A, each scale in the bank increments one semitone. Personally, I would have preferred Major, Minor, Modes, and some other pentatonics represented rather than microtonal oddities. The ability to set the root note independently from the selected scale would have been useful, as this would give the user more variety of scales to work with and make the module more musically adaptable. One bank of scales is available for creating custom user made scales, so you’re not stuck with their offerings. Also, 4MS has made the source code for the firmware available through their website, so in theory the banks and scale selections could be completely overhauled along with the entire functionality of the unit if someone were so inclined. 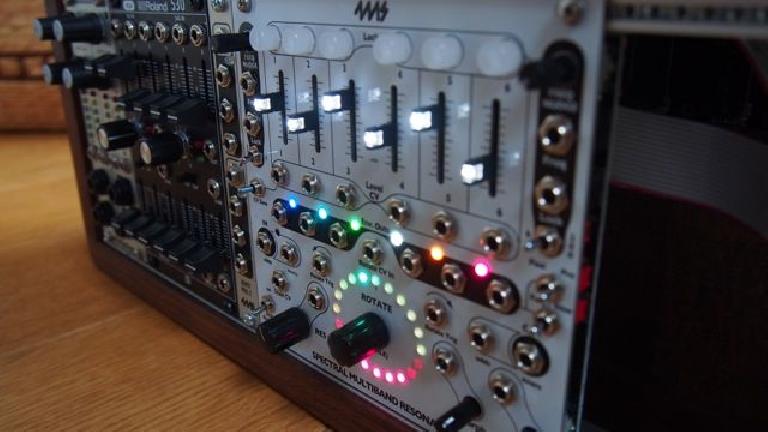 Many controls for patch cables and your fingers

The level CV inputs respond well to drum triggers which is great for creating short percussive chimes. There’s something really magical and satisfying about spinning the rotate or spread controls and playing with the morph settings.

Running drums through is quite interesting as you can extract rhythmic pitches, or extract envelopes to trigger other elements for layering. 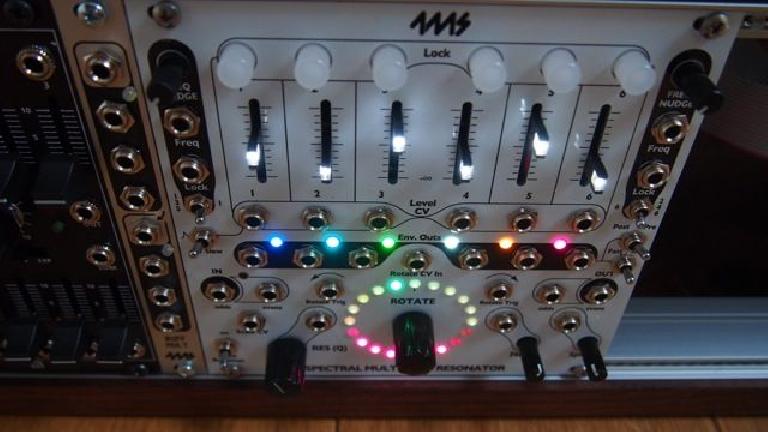 When using it to process my field recordings, I found that since lower frequency content has much more power and energy, this range would make notes pop out or even distort in a nasty way, while high frequency content would be far softer. Using EQ and compression beforehand to tilt and squash material might be necessary to get more usable results.

The Spectral Multiband Resonator is a unique and well-designed module that sounds great and is a joy to play with. It can be used and controlled in a multitude of ways and rewards active tweaking of the controls. However, the implementation of the scales places a roadblock on the scope of its use. Clearly this module will not resonate with everyone, but what module does? No, not even Maths. Or Disting. For most of my examples I tried to keep the SMR isolated and free of effects to focus on the sound of the module itself. Below is an example of it being used as a parallel processor for the 4MS Noise Swash with reverb from the Pittsburgh Modular Verbtronic and bit reduction from Pittsburgh’s Crusher. 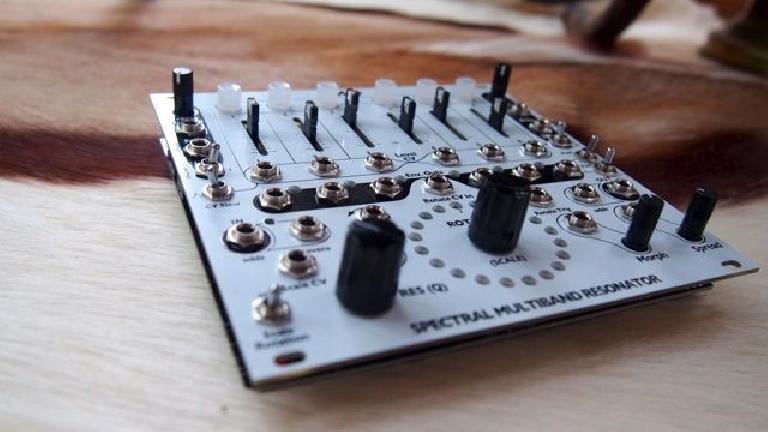 If you’re still looking for more information, DivKid has a great thorough video overview which shows the SMR in action. I would definitely recommend checking it out if you haven’t already.

Cons: Odd implementation of scales. Prone to distortion if pushed too hard.