Reverb Plug-Ins Every Producer Should Know

If you haven't explored beyond your DAW's stock reverb plug-ins, you could be missing out on a wealth of mixing options. Joe Albano shows you what's what when it comes to reverbs.

Reverb is an effect that’s used so often that sometimes people tend to take it for granted, but there are many different reverb options out there for those who are a bit more discerning about the space they place their mixes in. There are so many good 'verbs around that it’s hard to pick just a few, so I’m going to make up this list of standout reverbs by type, with two or three plug-ins mentioned in each category, just to be a little more inclusive.

Convolution reverbs use audio recordings of the response of real acoustic spaces as the source material for the reverb/ambience they create. These recordings are called IRs, or Impulse Responses—a click or swept tone stimulates the room and microphones pick up the room’s response, which is stored as a regular audio file—the IR. Most IRs can be loaded into any convolution reverb but different models include their own libraries, and while there are usually not as many controls as with traditional algorithmic reverbs—many of the aspects of the room sound are fixed in the audiofile IR—plugins still offer a variety of features for shaping and fine-tuning the reverb sound. And besides the natural spaces that are their forte, convolution reverbs can also be used for effects—more on that below.. 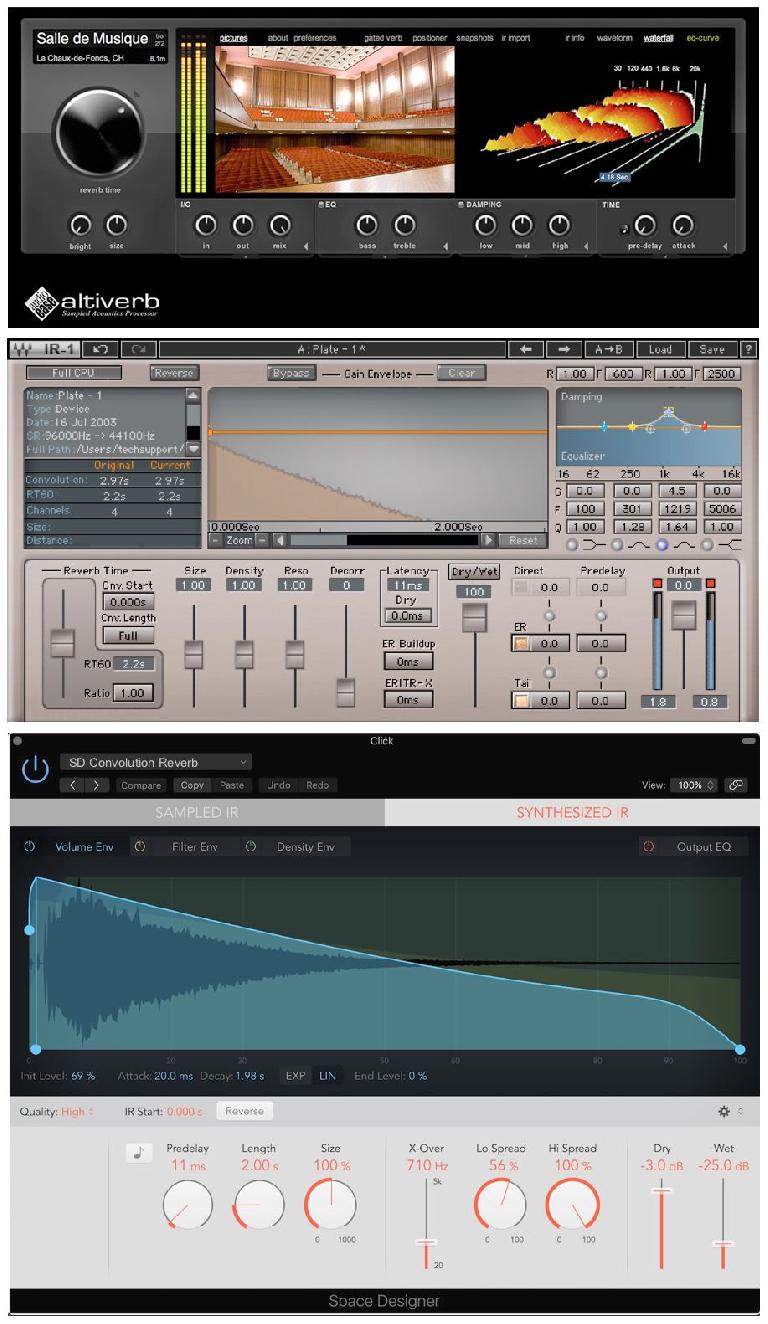 The dean of convolution reverb plug-ins is Audio Ease’s Altiverb, currently at v7. Altiverb offers a large library and as with most plug-ins, additional IRs can be downloaded from the company’s website. The plug-in displays both an image of each real room/space and a graph of the reverb response, and there are useful controls for the aspects of the sound that can be tweaked in a convolution reverb: tone, reverb time (decay), and damping.

But Altiverb is not alone—excellent convolution reverbs are also available from many companies—like Waves’ IR—and many instrument libraries include them, especially orchestral libraries. There are free convolution verbs as well, and nowadays most DAWs also include one. Logic’s built-in Space Designer is widely employed by Logic users, and even includes a utility for creating one’s own IR recordings (as do others).

Algorithmic reverb is the traditional type of digital reverb. The reverb sound is created from scratch by generating complex patterns of delays, which simulate the reverberant sound field by generating initial delays, distinct patterns of early reflections—which define the character of a particular room or space—and the later decaying tail of denser reverberation.

Since the sound is created within the plug-in, algorithmic reverbs usually provide a much wider range of controls. The best of them allow the user to dial up very specific reverb sounds, with full control over just about every aspect of the virtual room’s response and tone, going well beyond the more limited set of options that convolution designs provide to fine-tune the reverb character. 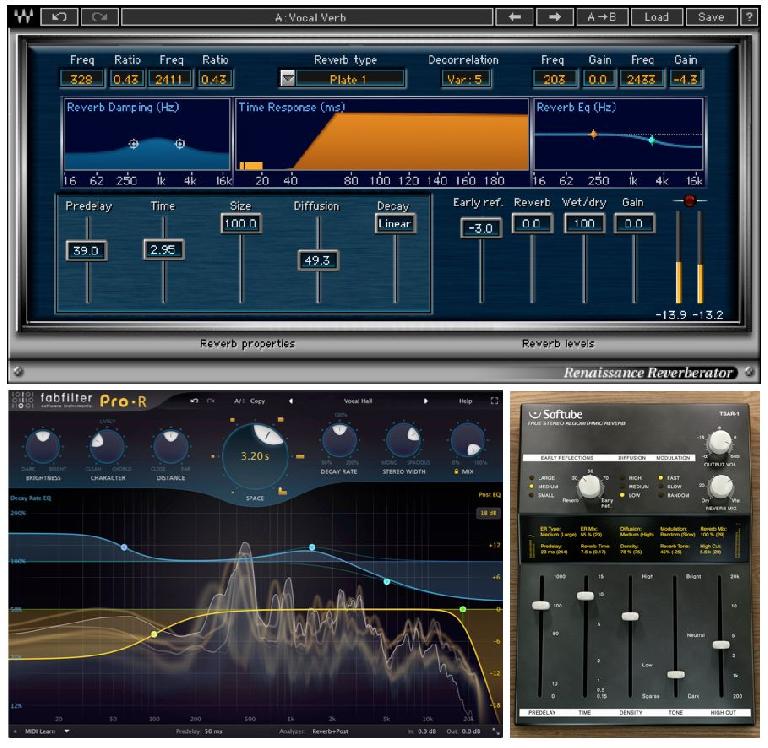 Some older and newer algorithmic reverbs

Classic algorithmic reverb plug-ins like Waves’ Renaissance Reverb have provided warm, rich reverb tones for countless recordings for many years. More recent offerings include FabFilter’s Pro-R, which augments its comprehensive yet accessible control set with a dynamic display that helps to inform the user’s tweaks via a graph showing the changing response of the reverb signal. Other standouts include Softube’s TSAR-1, and Logic users will enjoy the new ChromaVerb, which also incorporates a colorful and useful display. Waves’ H Reverb—the H is for hybrid—combines convolution processing with algorithmic design, for a best-of-both-worlds approach; the interface itself is closer to an algorithmic design, with comprehensive controls for many aspects of the reverb sound.

In fact, while many reverb plug-ins do a good job of emulating the classic algorithmic Lexicon hardware models—like the PCM 70/80 and 224/480—Lexicon itself offers those algorithms in its own collections; several bundles provide the sounds and features of Lexicon’s most famous and widely-used hardware reverb boxes. The Lexicon reverb sound, warm and rich, helped to define the sound of modern recordings, and those sounds are now readily available in plug-in form. Eventide, another creator of classic digital reverb hardware, offers emulations of some of their classic designs: the Reverb 2016 plug-in emulates one of their classic rackmount boxes, while the T-Verb recreates a specific reverb setup from a classic album session. 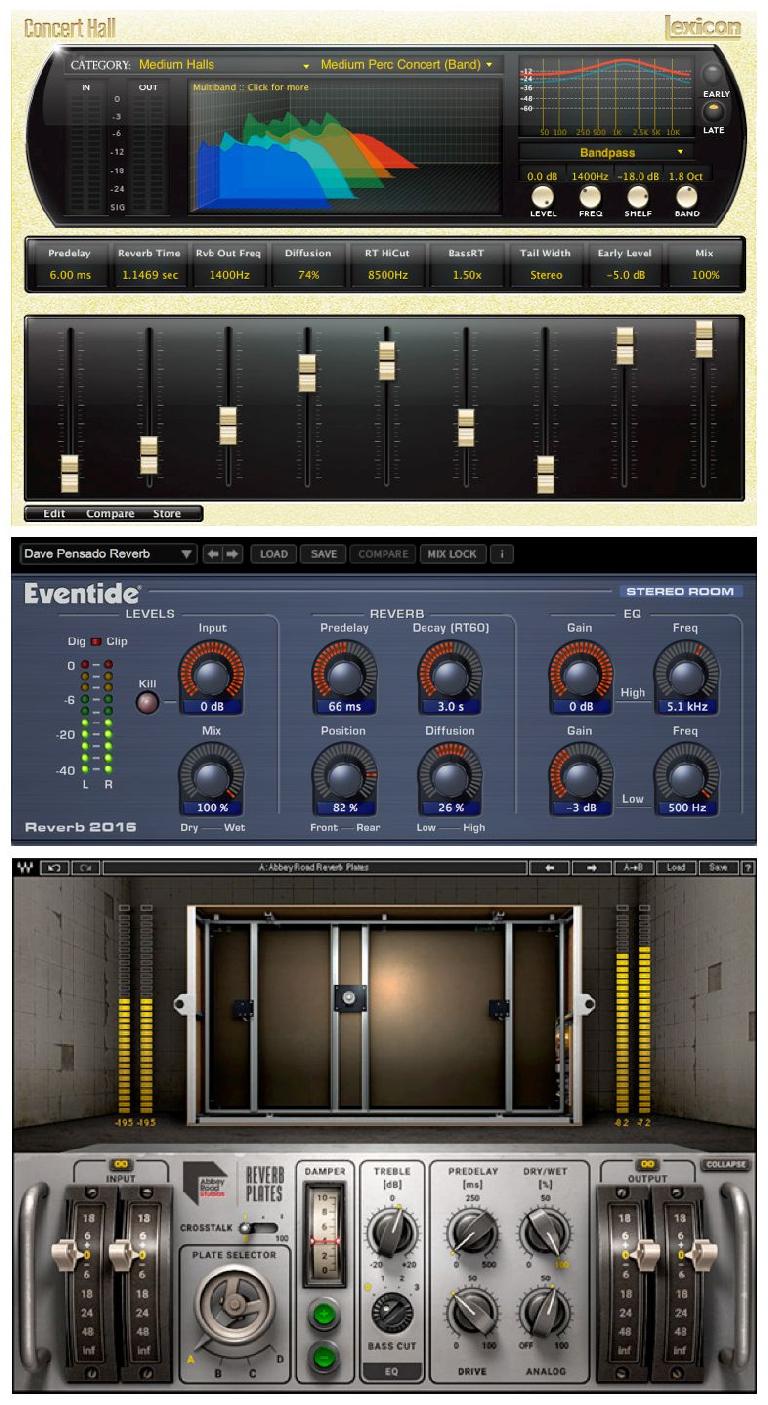 While many reverb plug-ins both convolution and algorithmic primarily seek to provide realistic sounds of natural spaces, reverb can also be used more creatively as a special effect, and there’s no shortage of reverbs that go beyond the basics, offering more creative opportunities for reverb-based sound design.

Both algorithmic and convolution designs can provide effects. In fact, while convolution plug-ins are generally marketed as reverb—since that’s their primary application—any IR audio file can be used, not just recordings of rooms or natural acoustic spaces. Most IR libraries include IRs of odd or unusual resonant spaces, and even non-space recordings can be convolved, for anything from weird bubbling, shimmering effects to shifting, phasey tonalities, allowing for some highly creative sound design. IRs of loudspeakers are commonly employed in guitar amp sims to emulate the sound of running the signal through the limited bandwidth and slight breakup of a typical amp’s speaker, or the distinctive edge of a table radio or bullhorn; Audio Ease’s Speakerphone plug-is dedicated to this, with a large collection of specialized IRs of everything from amp speakers to walkie-talkies.

Many algorithmic reverbs are also well-suited to effects. Being able to dial up any settings for early reflection patterns, reverberant sound fields, decay/damping and tone lets the creative user dial up reverb effects that go well beyond natural/realistic room response to unusual response patterns, creative filtering and shimmering sustaining-reverb sounds. Reverbs like Waves’ H Verb with its modulated “Time Filters”, as well as Logic’s built-in Chromaverb with its effect-oriented algorithms are good examples of algorithmic reverbs that can be special-fx tools as well as simple room simulators.

If a mixing engineer from the 60s, 70s, or 80s were to travel through time to the present day, he’d think he had died and gone to reverb heaven. Modern reverb plug-ins offer so many options that it can be hard to decide which plug-ins to choose and which sounds to dial up, so many people may just pull up a few of their favorite presets and leave it at that. But a little time spent exploring less-familiar models and features might reveal some interesting and welcome new sounds and capabilities, over and above that favorite room.

Learn more about reverb and other audio concepts in the Ask.Audio Academy here: https://ask.audio/academy?nleloc=new-releases