Language
It doesn't matter what genre you're creating for, remixing tunes in Ableton Live can be helped by being well-prepared and knowing a range of tricks to keep your creativity flowing.

The art of the remix has become an essential component of electronic music. Producers of all stripes are called upon to bring their magic touch to material by other artists—often from colleagues producing in a similar style, or sometimes from artists working in a completely different genre. Ranging from simple club re-edits to nearly unrecognizable revisions, the approach to remixing can vary as widely as the source material supplied.

Getting started on a remix can be easy if the provided parts are well-prepared, especially if at least one or two elements inspire some ideas right away. If the material is less exciting—or in some cases, so exquisite you're worried whether you can do it justice—there are a number of tricks to get the creative juices flowing.

The first thing you'll want to do is navigate to the folder containing the remix parts in Live's browser. If you're lucky enough to have some helpful info such as BPM written into the file or folder names, you may want to adjust your global tempo accordingly for easier warping—this can always be changed later on.

In the event you've been sent arrangement-length stems, often featuring a great deal of useless silence, you'll want to bring them into the Arrange view and isolate the most useful passages, selecting and Consolidating them—via Command-J (Mac) or Control-J (Windows) or the Edit menu—into new clips that can be brought into the Session.

Previewing parts in the browser, you'll want to decide whether to bring them into audio tracks as clips, bring them into a sampler instrument—or convert them to MIDI, which we'll explore in a future installment. Generally, if they're loops you can start with them as an audio clip, while one-shot samples may be better served in a Simpler instance—possibly as part of a Drum Rack.

Once you have all the usable parts from the remix pack arrayed in your Session view, you should take a brief moment to name your tracks accordingly—and your clips as well, if they weren't named by whoever provided the samples. With all this configured, you now have a raw palette of parts to work with from the original, ready for extensive manipulation, editing, and recombination. 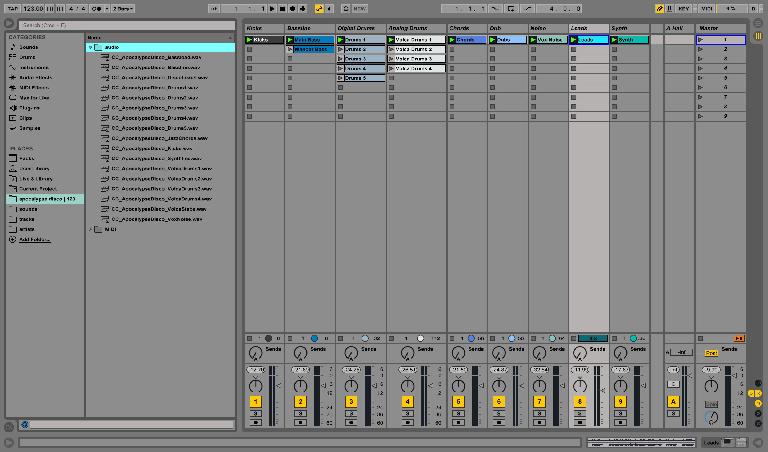 Pic 1: Clips laid out and ready to go.

First up, you'll want to make sure your clips are warped properly and looping at the master tempo. Next, you can select a warping mode appropriate to the type of sound you're working with: Beats for drums and percussion, Tones for smoother melodic and harmonic content, Texture for atmospheric elements, Re-Pitch for drums and other sounds devoid of harmonic content, and Complex or Complex Pro for full loops that incorporate elements of all the categories outlined above. 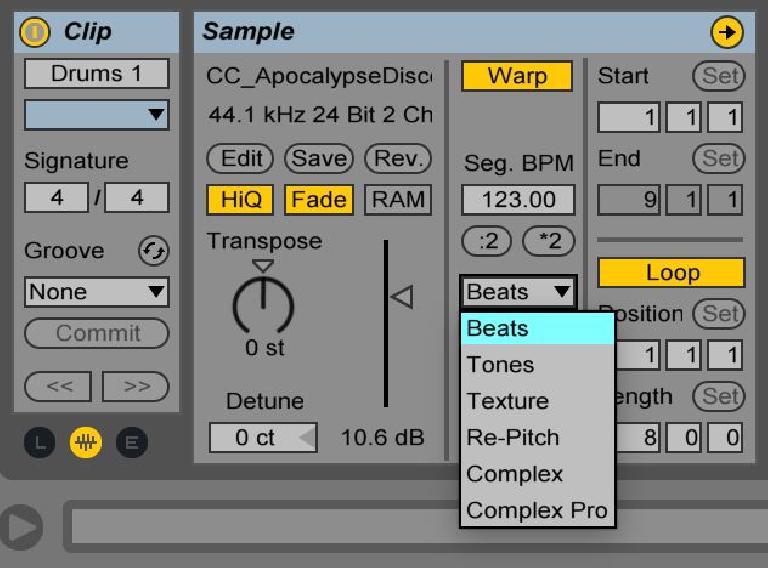 Before delving further, it's advisable to duplicate the nicely configured clip—via Command-D (Mac) or Control-D (Windows) or the Edit menu—before making any further changes so you can easily revert to the pristine version if needed.

Finally it's time to start tweaking. You can twist the Transposition dial to alter the pitch in semitones, with the Detune control available for finer adjustments; try this on drum loops to modify the tonality, or drop a lead line an octave (12 st) at a time to hear how it sounds as a bass line. Likely familiar by now, the slider to the right adjusts the gain of the clip independently of the track's mixer volume.

PRO-TIP: Loops that have been cut correctly for the BPM but at an odd loop-length will sometimes be stretched oddly by Live as the algorithm assumes some division of eight-bar phrasing has been employed; to compensate, just type the original project BPM into the clip's “Seg. BPM field” and you should be good to go.

Four of the buttons above come in handy during the remix process. HiQ ensures the highest quality interpolation, and should be engaged in all cases before rendering the finished piece, if not sooner. Fade adds nanosecond amplitude fades at the end and beginning of each loop to reduce unwanted clipping. Rev reverses the audio—simple as that. Last but not least, Edit opens a third-party destructive audio editing application (specified in the Sample Editor field of the File/Folder preferences), which can be handy for simple procedures such as removing DC offset, converting to mono, or amplitude normalization.

PRO-TIP: If you're looking for an easy-to-use free audio editor for Windows and OS X, try Ocen Audio: http://www.ocenaudio.com.br

The first thing to explore within the Sample Editor is the loop area and start point. Simply grabbing and looping a smaller or differently-phrased loop can lead to a whole new tangent of musical ideas. You can also adjust the start marker, offsetting it by 16th or 8th notes to easily achieve a completely new rhythmic feel.

For detailed editing, you can start to look at adjusting the Transients within your clip. In cases where you're hearing digital artifacts where there shouldn't be any, try selecting and deleting transient markers that don't coincide with any particular impact in the audio.

Preparing to submit remix parts of your song to an artist or label for remixing purposes? Make the remixer happy—and the world a better place—by following these simple tips.

If you're not happy with the timing or groove of an audio clip, you can select the time range in the Sample Editor and use the quantization commands (Command-U/Control-U, Command-Shift-U/Control-Shift-U, or via Edit menu) to swiftly align the transients with your specified musical intervals. Doing so will lock your transient markers into warp markers, which can be further adjusted as needed for “elastic” audio editing.

In the event that you only want to adjust a single note or drum hit, hold down Command (Mac)/Control (Windows) while you hover over the target transient and then click it to instantly create three warp markers: the one you clicked, and one on either side which will remain in place to protect the timing of the audio preceding and following the adjusted marker, allowing you to make subtle rhythmic edits without altering the rest of the loop. To tighten the audio to an existing warp marker, hold down the Shift key and drag the warp marker left or right accordingly. 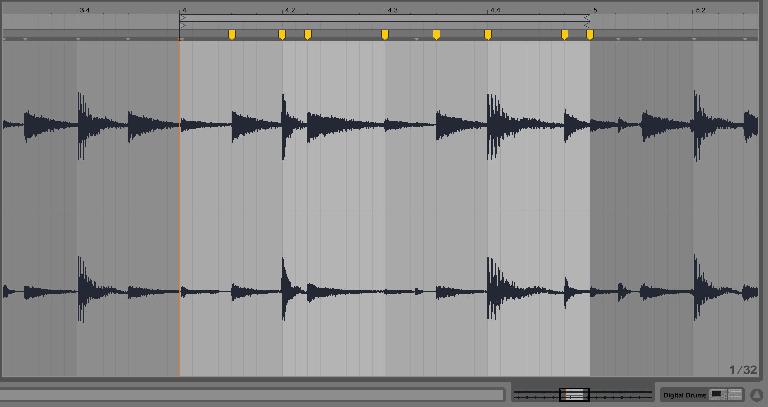 While in Beats mode, there are a number of transient looping options available. The default mode denoted by the two horizontally opposite arrows in the transient preservation area is to take each transient and to loop it forward and then in reverse until the next transient has been triggered, providing a smoother sustain when stretched. The other looping mode, denoted by a pair of forward facing arrows, loops forward over and over, which is usually not quite as smooth. The last option is to play the transient once and not loop it at all, denoted by the single arrow pointing at a vertical line. The value box to the right of this controls the envelope amount, which determines how long each transient plays for. Using the “play once” mode in conjunction with short envelope amounts—try zero to start and slide up from there—you can get very clipped sounding minimalist drum loops, giving you some welcome control over the decay of the notes and/or drum hits in your audio clip. 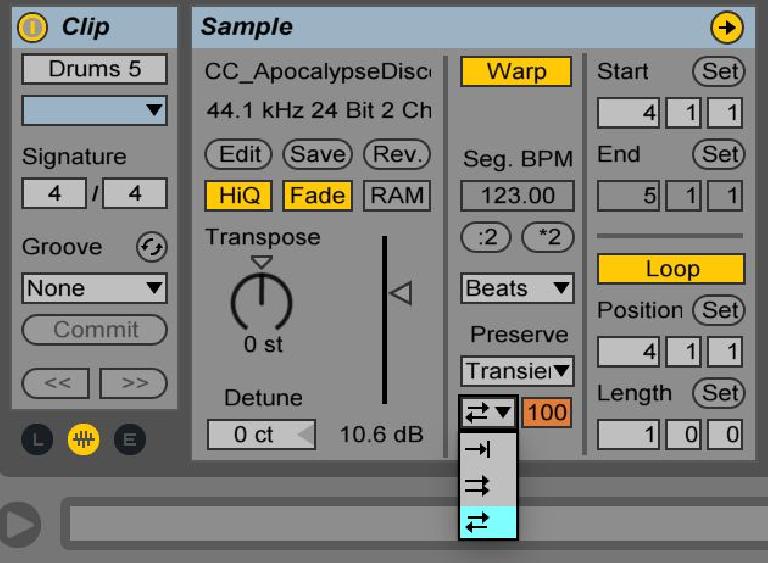 PRO-TIP: The preserve transient envelope amount isn't available for automation or modulation, but you can create different clips each with a different value to model convincing decay dynamics where needed.

Above this area is another drop-down menu that determines timing intervals to be played back instead of the transients, which can be used for stuttering rhythmic effects, or to simply isolate particular elements of a drum loop. For example, by taking a full house beat loop, setting the transient preservation to 1/4 notes in “play once” mode with some envelope adjustments and setting the loop length to the first single quarter note, you can grab and loop just the first kick drum hit without any interstitial percussion. 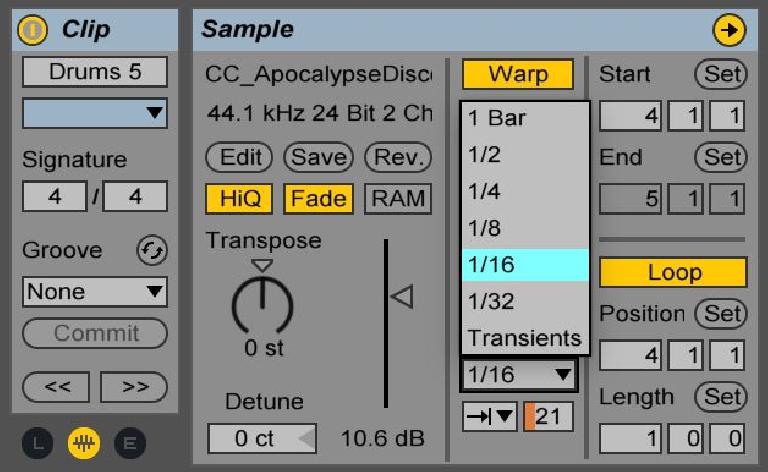 Tones and Texture modes use granular pitch shifting to spread audio over the allotted time, chopping the source material into tiny slices, or grains, and distributing them as controlled. In Tones mode, there's a simple Grain Size knobs that you can adjust to taste, noting the difference between larger overlapping grains at the highest settings, and the slivery, serrated edges brought out at the lowest settings—particularly evident with material that's been transposed up or slowed down considerably. Texture mode provides a much wider range of Grain Sizes along with a Flux control for randomizing the playback order of the grains, to create textural ambience with a distinctive sound.

PRO-TIP: Try taking a lead element, transposing it up 12 or 24 st, then experiment with the most extreme Grain Size and Flux settings in texture mode to retain the melodic contour of the original while drastically altering its tonal character. To extend it into a pad, try doubling or quadrupling the BPM and corresponding loop length via the :2 button.

Whether you plan to add your own additional elements or not, the goal at the outset of the remix is to make the most of the source material supplied. In this tutorial we've looked at some initial ways to imprint source material with your own attitude and character without even leaving the audio clips themselves—stay tuned for the next parts in our Remixing in Live series for advanced clip manipulation and sound design using Simpler, Sampler, Slicing, and more.

Watch & learn how to remix a complete track in Ableton Live HERE.

Other articles in this series:

Elliot Rent
Hi, is good to get this kind of information, but could be most effecient make a video, is more easy for everybody get the information when see a video. When people have to read is too boring. Cheers