Red Light District Is An Analog CV/Gate Sequencer For Eurorack

Red Light District from Golt! Synths is an 84hp traditional cv/gate sequencer that can be synchronised at different ratios to MIDI clock. There's also much more to it...

There's a CV/Gate sequencer for Eurorack synths that, although not strictly just released, is worth checking out. The GOLT! Red Light District is available from as little as $319 AUD (about $240 USD) as a DIY kit through to $895 AUD ($695 USD) fully built. The creator, Stuart Allan, took to Facebook this morning to tell people about RLD and the response has been very positive so far.

Here's what Stuart tells us about the RLD eurorack sequencer:

It’s a CV/Gate sequencer in analogue format that syncs to MIDI. Timing is done in x0x step sequence format and you can program the timing for rests as easily as you can for gates. It has many different modes for step order, multiple sync ratio’s, A/B patterns, synchronised clock dividers, external clock in (that gets converted to MIDI clock) and an optional Din Sync out (configured at build time).

Best thing is how the CVs can be held even when the gates are terminated, and the way the slew interacts with the sequence when the gates drop out. It’s very playable and allows your modular to be easily synchronised to the rest of your studio.

It's a large module, but to avoid menus and give that old analogue feel and playability, it needed to be big to fit all those switches in. So far about a third of people who bought one (I did a prerelease run) have chosen to put it in a separate skiff. 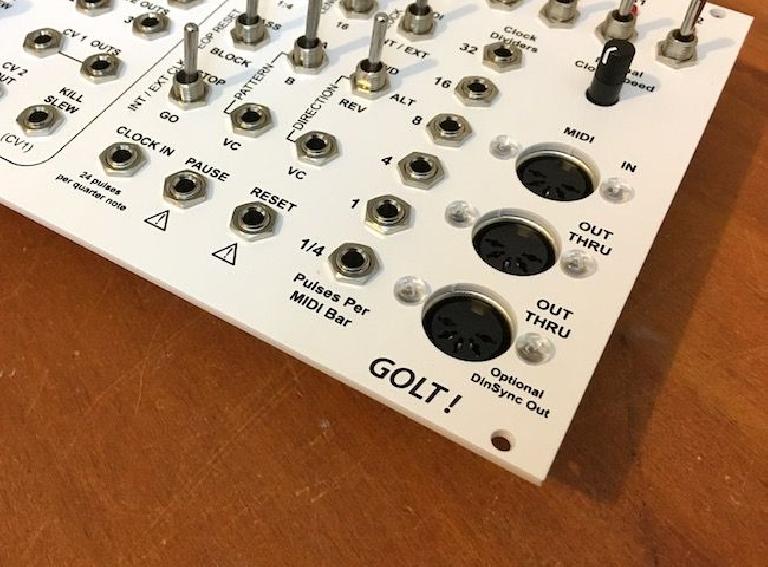 More information is available from the RLD page: http://goltsynth.com/rld/
The User Manual, Build Doc, BOM, Packing Lists and other documents are all there.