Language
If you're looking to re-create an acoustic instrument or vintage synth/drum machine in software, sample-based instruments will only take you so far. Joe Albano explores modelling instruments in depth.

Sample-based virtual instruments have been around forever, and most of us depend on them whenever an acoustic instrument sound is called for, and the real thing is not available (and even sometimes when it is). But while modern sampled instruments are better than ever, there's another type of V.I. technology that's becoming more widespread'"modeling.

The Very Model of a Major Instrument

We're all familiar with modeling technology, as it's applied to audio processors and effects'"every time you see a plug-in with a photo-realistic front panel of a classic piece of studio gear, it's probably a modeled version of that unit.

Modeling of a processor involves analyzing the contribution of each component in the signal chain (circuits, transitors, tubes, transformers, speakers, even mics), and the range of effect of all front-panel controls, and then coding all that into software, so when a signal is run through the plug-in, it's processed dynamically, just as it would be if it were passing through the actual, physical circuit path, with all the complex interactions that make the original sound so rich and compelling. Well, that approach can also be utilized for creating virtual playable instruments, that respond to the player's touch with all the complex nuance that the real thing would bring. Of course, analyzing and capturing the dynamic response and interactions of the physical components that make up an instrument is more challenging, and modeled instrument technology is still evolving. But it's definitely ready for prime time, and there are a large number of excellent modeled V.I.s out there now, that are possibly the closest thing you can get to playing their actual, physical counterparts. 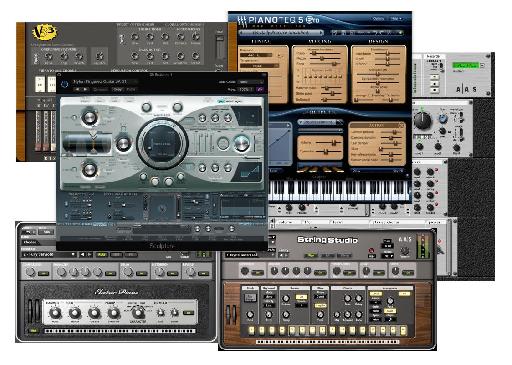 So how is a modeled instrument put together? Well, the designer would start by analyzing the physical elements of the real thing, like, say, a drum, or a piano. For example, the sound source for a piano note is the vibrating string, so first they'd come up with a formula to emulate that'"actually this kind of research dates way back to a time long before there was sufficient computer power to utilize it for real-time (playable) applications (see Karplus-Strong algorithm)! The sound is created by a hammer striking the string, so it's characteristics would be another part of the calculation. Then the string's vibrations are altered and modified by the bridge and soundboard, so they'd also analyze those, and the interaction between all these elements, and create code to emulate the complex responses you'd get from different playing conditions (i.e. hard, soft), and other variables (materials, thickness, pedal positions, etc). One of the most difficult aspects to capture would be the acoustics of sound bouncing around between the strings/soundboard and the lid, but that's a big part of a successful piano model. All of the components interact dynamically, in response to variations in the player's performance, and all of those interactions must be designed into the model, to make it react to the player as expected, so he/she can fully apply all their musical technique, honed from years of playing and practicing. On the output side, modeled instruments often complete the signal path that would get the instrument from studio/stage to tape/disk, including emulations of room acoustics (when relevant) and the specific characteristics of virtual mics at various placements (close, distant), suitable for recording different musical styles. 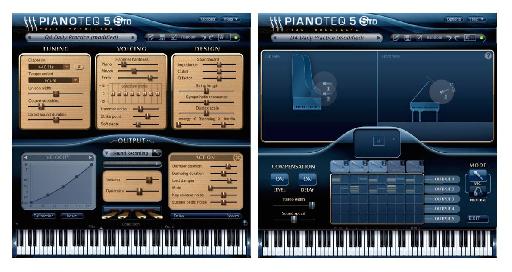 Fig 2 Some of the components of a modeled (piano) instrument (Modartt Pianoteq).

Put it all together and'"if the execution is up to snuff'"you've got a virtual version of the original instrument. And not necessarily just a generic 'piano' or 'drum' or whatever'"once the model is constructed, the specific characteristics of a particular brand/model can be dialed up, via controls that give the user (at least some) control over the individual elements that make up that virtual instrument. For example, a model of a snare drum might allow the user to specify size, depth, material (wood, steel, brass), head type (single-ply, double-ply, coated), head tension, damping, and other specifics, dialing up the exact quality of the desired drum. For a piano, a brave or adventurous user might want to try his hand at altering the size and density of the soundboard, the hardness of the hammers, or even re-balancing the individual string harmonics, in search of the particular characteristic timbre of a Steinway or Boesendorfer. In fact, all the tweaks I just described are user options in some real modeled instruments'"respectively, Roland's V-Drums (hardware kit) and Modartt's Pianoteq (plug-in). Both of these instruments represent some of the best use of instrument modeling technology out there, but there are plenty of others as well. 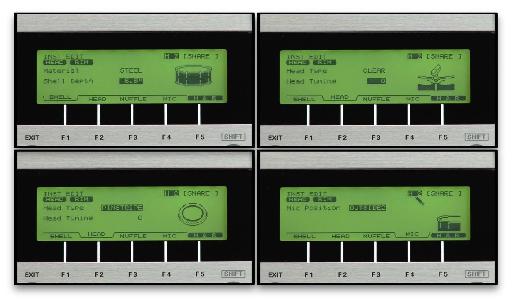 Fig 3 Some of the modeling programming parameters in one of Roland's V-Drum 'brains'.

So where will you find modeled instruments? As I said earlier, instrument modeling is still evolving (and can be pretty CPU-intensive compared with sampling, which often relies more on disk streaming), so there aren't as vast an array of modeled V.I.'s out there as there are modeled guitar amps and studio processors. But there are quite a few, and they range from specific emulations of a single instrument to general-purpose roll-your-own designs, for those that want to jump into the deep end.

Though underlying research has been around for quite a while, it took quite some time for applications to reach the point where the instruments could sound virtually indistinguishable from the real thing. Yamaha, notably, was an early modeling proponent, with their very popular VL-1. Despite the fact the sounds were still clearly artificial at this point, the modeled brass (and other) instruments in this hardware box were among the most musically expressive virtual instruments ever created (up to that time), especially when played from a suitable MIDI controller, and they really showed the promise of modeling (awaiting the greater DSP horsepower available 10 years down the road).

Many of the first fully successful applications of instrument modeling were emulations of electro-mechanical instruments, like the Rhodes and Wurlitzer electric pianos, and the Hammond organ. This makes sense'"those instruments all have physical components to be modeled (hammers, dampers, tynes, tone bars, pedals, etc.), but the finished sound is output electronically, eliminating the need for the analysis and calculations of more complex elements, like a player's lip buzz or breath, or the instrument's sound wave in the air. (In fact, some early attempts at modeling acoustic piano lacked an adequate emulation of that particular element, and, despite simulating a rich, responsive string response, ultimately sounded too buzzy and electronic).

But electro-mechanical keyboards provided the perfect way for model designers to cut their teeth. Rhodes, Wurli, and Clavinet models (VEP, VB3) are included in Logic, and plug-ins from companies like AAS (Applied Acoustics Systems' Lounge Lizard EPs), GSi (the excellent and inexpensive VB3), and Modartt, successfully capture the sound and response of those classic keys, among others. An that's not even mentioning the many hardware keyboards that employ the technology (as an alternative or an adjunct to sampling) for their classic keyboard sounds. 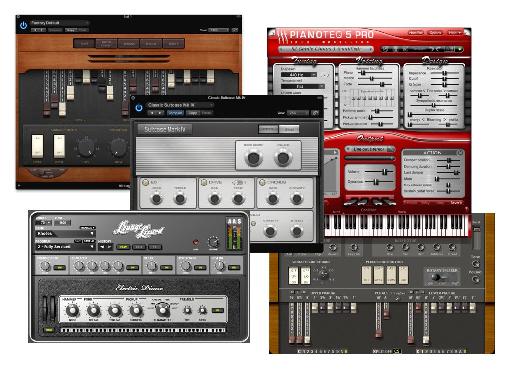 You'd think modeled drum plug-ins would be a natural, but the only really comprehensive acoustic drum modeling instrument I know of is the hardware-based V-Drum line, from Roland. Their kits include state-of-the-art mesh-head pads and cymbal triggers, and a 'brain' full of modeled drums and cymbals, full of the kind of physical adjustment options described earlier. (Maybe it's still more CPU-intensive to model a whole kit'"even nowadays'"than you'd think?) Reason includes a simple drum modeler (Kong), and there are others around, but none as complete, or natural to play, as Roland's modeled kits.

As I mentioned, I'd heard several attempts at modeling acoustic piano, none really entirely successful, until Modartt came along. Their Pianoteq plug-ins (at version 5 now) have really managed to nail the sound and response of that especially difficult instrument, along with quite a few other percussive instruments as well, ranging from EPs to Mallets (Vibes, Marimba) to orchestral percussion. The most full-featured version of the plug-in provides copious control over the modeling parameters'"though it really does require some research and due diligence to be able to adjust these purposefully, just playing around with them can produce some great weird synthy-yet-acoustic-sounding patches.

Audio Example 2 The sound of one of Modartt's modeled acoustic pianos (including resonance and mechanical pedal noises):

And that gets us to the other kind of modeling instruments out there'"the ones set up for you to create your own instrument models, sometimes from scratch (from the basic sound-generating algorithm on up). AAS incorporates this kind of control in their Tassman (general-purpose) modeling instrument, and their StringStudio string modeler (based around the Karplus-Strong algorithm). One of the most full-featured DIY modelers comes included with Logic'"Sculpture. This has all the building blocks for building up a sound from scratch, using the language and components of the modeling toolbox, starting with the Exciter stage (a modeler's alternative to a traditional synth's oscillator). This lets you specify the vibration characteristics of a string (steel, nylon, etc.) or other material (glass, wood, etc.). You choose a Disturber'"this sets the attack characteristic, but  it's not just a simple time setting. It will impose the behavior of different ways of initiating an object to vibrate, including striking (piano, drum), plucking (guitar), bowing (string), or blowing (wind). And then there's a Resonator section, which contributes models of different kinds of specific instrument body types. There are also many additional parameters for setting up modulations and dynamic response to input (MIDI notes and controllers), to give the new, modeled creation all the expressive character that will make it sound (and play) like a 'real' instrument, even if it's clearly a made-up sound. 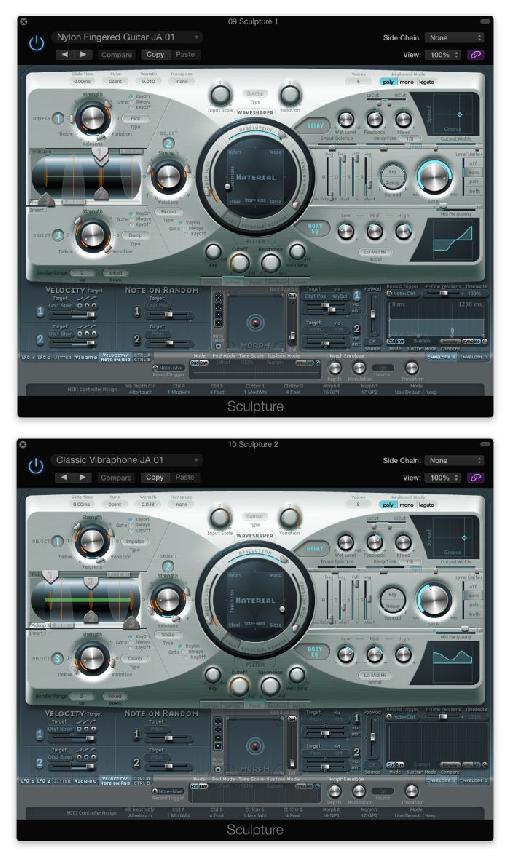 Audio Example 3 A couple of modeled sounds, built from scratch in Sculpture:

And that's about all I have room for here. Modeling techniques continue to be applied to more and more virtual instruments, including classic/vintage synthesizers, and just as this approach has practically taken over the world of audio processors, it seems poised to make similar inroads in sampling's domain as well. If you've not worked with modeled instruments, now might be a good time to start exploring the technology, especially the DIY offerings'"you never know where it will lead you.