Language
You don't need $10,000s worth of analog hardware synthesizers to recreate the gorgeous theme music to Netflix's Stranger Things. Here's how to get very close to the sound using u-he's Diva plug-in.

Think you must own hardware synthesizers to get that analog sound like in the music from Stranger Things? Some think you do, some believe software has caught up. Even though I have plenty of hardware synths myself, I lean toward the belief that software has indeed caught up, and in many ways exceeds hardware. In this article I've used a single synth... u-he Diva! Arguably one of the best analog emulations available in software, I've created a remake of the Stranger Things main theme using several instances of Diva and a handful of effects available on any platform or DAW. This is not meant to be an exact note for note copy (it isn't) of the theme song... just a pretty solid example of how totally convincing virtual analog synthesis can sound compared to the "real thing.”

Here's what we were able to come up with using u-he Diva:

Virtual vs. Sample Based Oscillators

First let's make a few things perfectly clear. Not all software synthesizers are created equal... some are not "virtual" at all, or only partially. Some synthesizers oscillators are sample based... this means that the sound from the oscillators are simply playing back recordings of other instruments (in many cases analog synth recordings). When we say "virtual analog" this means the software instrument is generating the sound you hear by replicating all the different parts, including the oscillators, filters, LFOs, envelopes, etc. of a chosen physical model. It is not using samples or even wavetables. Diva is a true virtual analog synthesizer since the majority of its oscillator engines are virtual recreations, making it a perfect tool for creating a genuine analog synthesizer sound. Although I’ve only used Diva in the example remake above, there are plenty of great analog virtual synths from Arturia, Native Instruments, and dozens of smaller developers. 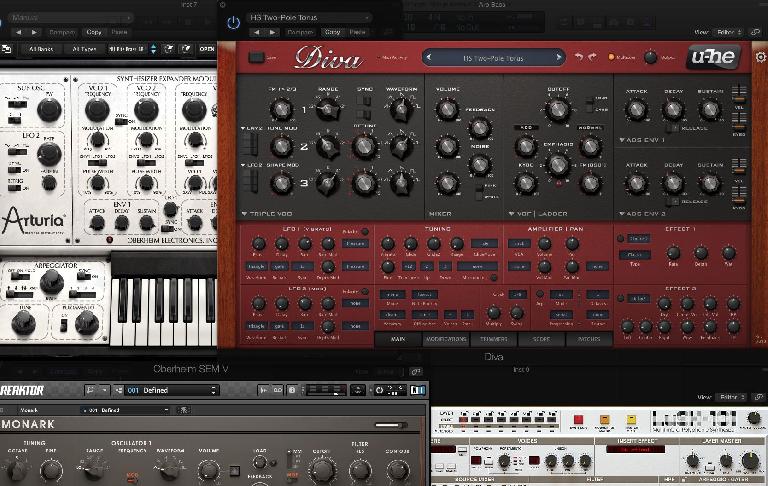 There are lots of virtual synths on the market nowadays. Above: u-he’s Diva, Arturia’s SEM V, NI’s Monark and D16’s Lush-101.

Play with the Knobs Sliders and Buttons

Just because a synthesizer is virtual, doesn’t mean you can’t program and experiment with it in exactly the same way as a hardware analog synth. All the controls are there for you. Roll your eyes, when your rich hardware friends tell you “there’s a tactile feel you just don’t get with software.” Every DAW out there like Logic and Live allows you to assign virtual synth parameters to physical controls on your MIDI controller. Many controllers even have an auto-map function that will assign common synth parameters on the fly.

Use auto-map… because turning real knobs is much more fun than using a mouse!

Detune. Did I say detune? Yes, and for good reason. Oscillators on physical analog synthesizers that are voltage controlled (VCO) can slip out of tune from one another, creating a cool thickened constantly varying/phasing effect. DCO, or “digitally controlled” oscillators attempted to fix this “problem,” by “digitally” controlling the (still analog) oscillator’s pitch to assure it would never slip out of key/tuning. Both VCO and DCO oscillator engines are available in Diva. Don’t expect Diva’s VCO’s to slowly drift apart however, although that would have been a funny addition! Start with the bass patch called “Two-Pole Torus” that uses the Triple VCO oscillator. Make tiny adjustments to each detune knob while playing.  This is great for a fantastic starting point for a lead when played high, or a bass with a low filter setting or filter envelope. In addition to detuning individual oscillators, on Diva’s “Trimmers” page you can even detune individual synthesizer voices. If your CPU can keep up, switch Diva’s “Accuracy” setting to “Divine.” 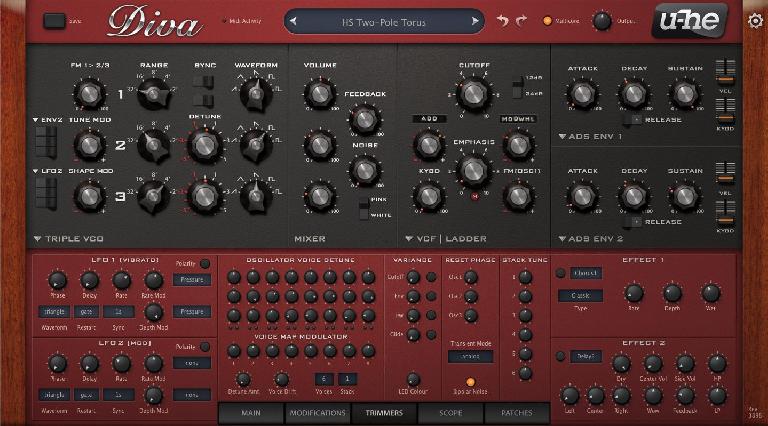 Download the "Stranger Things" Diva presets and create your own spooky sci-fi theme.

To give this remake an old school feel, I used Waves Kramer PIE Compressor on each Diva instance. This fantastic compressor has a great smoothing effect, and by default, it adds an analog hiss to the signal (you can hear in example file). Some people believe that this hiss fills in the gaps and adds a gluing effect to the various sounds in a song. I also used Brainwork bx_refinement on each sound. This cool plugin softens the harshness of digital sound. It allows you to dampen the highs without actually losing presence. For reverb I used the fantastic sounding Valhalla Vintage Reverb.

Add the final touch with effects like compression and reverb.

Regarding the mix, every single sound in my example is moving in some way. The main bass sound’s filter is in constant flux, creeping up at first, then leveling out, then opening wide at the end. It’s envelope Decay opens toward the end too. Volumes in the mix are never stationary. Use plenty of automation to keep things constantly moving on parameters like Volume, Cutoff, Detuning, Resonance, and envelope settings.

Recreating what physical/mechanical things do in software can be extremely processor intensive. I’m on a 12-core Mac Pro and still needed to freeze one of the tracks in the example remake. Virtual analog is always more processor intensive than the sample-based instruments. It’s not about RAM or hard drive space (as it is with the sample-based instruments), it’s about raw CPU power, so the faster the computer the better. Diva has a great—and often necessary—multi-core button that helps spread the load across multiple CPU cores.

Learn how to use U-he Diva in The AskAudio Academy here.