Language
In the first of this two-part mini series Rich Tozzoli explores how guitar players can approach recording bass parts when your bass player is AWOL or you need to get it done yourself.

OK, I’m guessing many of you that read this column (myself included) are guitar players. But when recording ourselves, we often have to cover/create bass parts as well. That doesn’t mean we’ll replace what a great bass player can do, but sometimes we need to do it ourselves. Having done TV music for so many years and having recorded and played literally hundreds of bass parts, I’ve learned a few things I’d like to share in the first of a two-part series.

When I first realized that it was best for me to play my own bass parts, I started to listen to bass players differently. I had always been a guitar player who, for obvious reasons, would focus on the guitar parts of songs. But then I got into listening to how bass parts (and players) interacted with the drums to make a badass rhythm section.

As a Zephead, of course, I started by digging into John Paul Jones. With that classic Fender bass sound, he had John Bonham to play with (that never hurts). But his parts were rooted in R&B, soul, groove and rock. Just listen to his approach on "Ramble On" off Led Zeppelin II or "Ten Years Gone" off Physical Graffiti. I learned to either play with the guitar riff for power, or step out into a different place using fourths, fifths, and beyond. But I always listened to the pocket where the bass sat in the big picture of each song.

From there I focused on ‘busier’ players, like Geddy Lee of Rush and John Entwistle of The Who. I listened to how bass parts lock with kick drums on Sade records, or drive hard like on Billy Idol cuts. For heavier tracks, I studied the unique Steve Harris of Iron Maiden or the funky Flea of Red Hot Chili Peppers. The point is that I diversified my listening and really studied the ‘parts’ and what the bass players were thinking. I tried to approach the songs I was playing on as a bass player, not a guitar player playing bass.

This is certainly a personal approach issue, but for me it was good to learn both styles. As guitar players, we’re probably used to playing with picks, so that’s not a stretch to approach the bass that way. What you get with a pick is what you would expect, more attack, precision, and more treble on the overall tone.  With fingers, it’s a meatier, thicker sound that is probably more traditional sounding.

I did study both approaches, with fingers taking me longer to learn. Slap and funk bass is a lot of finger approach as well, so it’s another style to be examined (though not often used in my work). Over the years, I’ve realized that for television tracks, it benefits me to play with a pick, as the parts are easier to fit into small speakers coming off a show. I have found that, of course, different picks offer different bass sounds, with my favorite Fender Heavy delivering me what I want most of the time. As usual, experimentation is key. Just try a bunch of different picks and see what works best for each song.

For simplicity sake, I use plugins versus hardware for treating the production end of bass. Of course, there is no right or wrong, whatever works best for your needs. With bass plugins, I always insert them directly onto the track, not as a bus/Aux return.

The Tech 21 SansAmp PSA-1 might seem like an odd choice for bass, but it has been one of my go to plug ins for many years now. To me what it specializes in is helping the edge of the bass poke through a mix. I tend to pull the Lows down so it's not too thick on the bottom and work with the Drive and Crunch knobs. They, in combination with the Pre Amp level, can deliver me a touch of saturation or a lot, depending again on my needs. I wouldn’t want to work without this plug in. 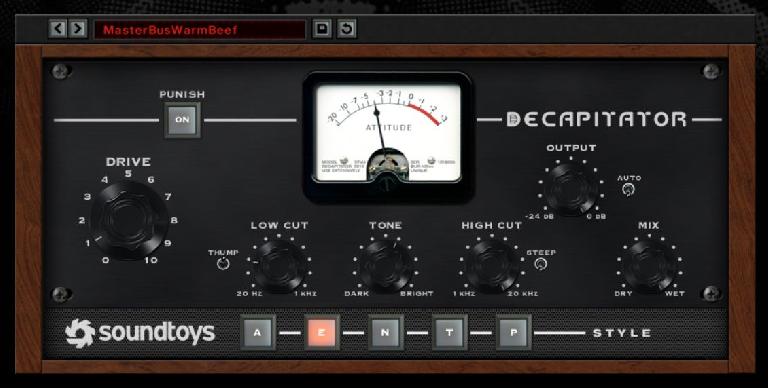 The Decapitator is an Analog Saturation Modeler, and gives bass a nice bit of tape character. My favorite settings for bass with a bit of edge are to have the Drive up no more than 2, the Output maxed with full Wet Mix and the Thump switch up for extra bottom. The Tone knob lets me quickly mix between Dark and Bright, depending on what I’m looking for. Sometimes I’ll pull down the Hi Cut to smooth out the top end, or push up the Low Cut to tighten up the bottom. If you want to kick up the edge, push up the Drive knob or press the Punish button (be careful!). 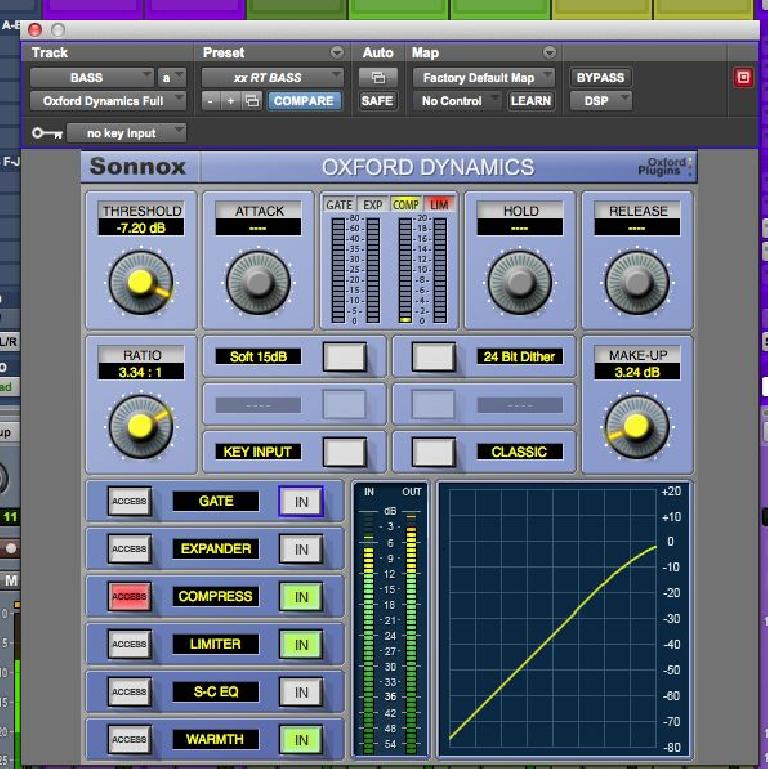 I use the Oxford Dynamics when I have a cleaner, smooth bass track. It’s a very versatile plug in, and the Compressor section lets me softly knock down any transients that stick out without ever stepping on the attack. I use the Warmth feature for just that, to add something extra to the character. This is the cleanest most audiophile-sounding of the bass plugins I turn to. 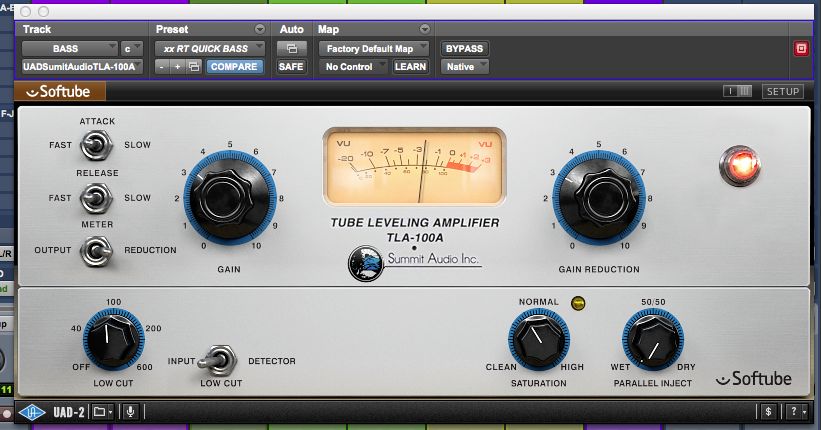 The thing I like most about the Summit TLA-100A Compressor is that it never steps on the bass part. It’s a tube/solid-state design where the compression is based on the program material feeding it, giving just what I am seeking—a smooth sound. I will often use it even if I'm using any of the other plugins, just to have a small amount of gain reduction that’s invisible. But I also engage the Low Cut on Input, and set it to around 100 Hz. This helps clean up the bottom and make room for the kick drum.

Recently, I was recording guitar at a studio through my Mesa Boogie MKIV head and a Marshall 4X12 cabinet. I had my full signal path in line, including a Cry Baby wah. After I cut my guitar parts, I was going to layer the bass and grabbed the cable that I thought was going to the DI input. But it was the guitar cable, and I played a few notes on my 70 Fender Precision through the distorted guitar amp and was like ‘whoa baby’. It was distorted, nasty, edgy and perfect. I even used wah on the bass part, which I had never done before. A happy accident, which has led me to use this setup many times since.

Having said that, most of the time I plug my bass directly into some form of DI box with a tuner, and record clean with no EQ, compression or effects. I prefer to process on the back end with some of the above-mentioned plugins, offering me more control.

There is no right or wrong when it comes to recording your bass signal path. You can choose to use amps, effects, or nothing but straight in. Just make sure if you do record with effects, you truly want them, because they can’t be removed later.

In the next column, I’ll dig further into the back end processing that helps cut those bass parts through any mix.

Learn all about producing guitar in the AskAudio Academy here.