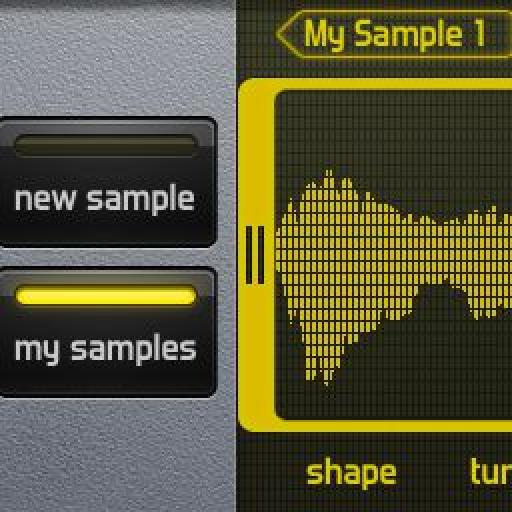 Record and Edit Your Own Samples in GarageBand for iPad

Language
While most headlines focused on the intuitive touch-based controls in GarageBand for iPad, there's a whole lot more that can be done by thinking outside the box. Hollin Jones gets hands-on.

When Apple brought GarageBand to the iPad, everyone knew it would be something special. What people tend to show off most of all are the touchscreen-controlled instruments, and stuff like the beatboxes and the amazing way you can strum and bend guitar and bass strings with your fingers. But GarageBand also has a built-in sampler, which can record either from the unit's own mic or from anything connected via the USB camera connection kit that is able to deliver sound such as a USB mic. There is also a new generation of devices coming out, most notably the Alesis IO Dock, that are able to provide professional quality, phantom-powered XLR inputs for your iPad. So getting high quality sound in is easier than ever.

You can get really creative with sampling to add spoken phrases, sound effects and instruments to a project and thanks to the ability to pitch shift samples and add effects you're not limited to keeping them sounding exactly as they do at the start.

In GarageBand's list of sound sources you can find one called Sampler. 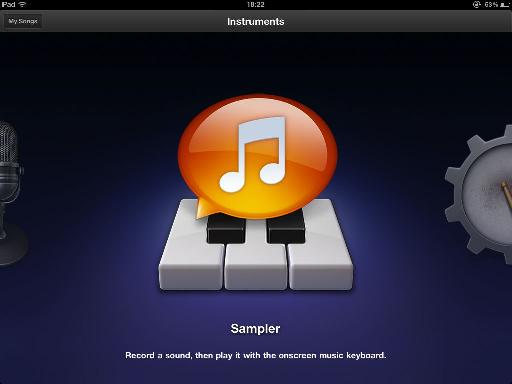 This differs from the Audio Recorder in that it records into a sampler and lets you edit the sounds you record. The Audio Recorder lays whatever you record straight down onto an audio track in your project. Tap on the sampler and in the next window you will see the iPad has picked up whatever input device it finds. If you don't have any special audio hardware connected, this will be the iPad's microphone. 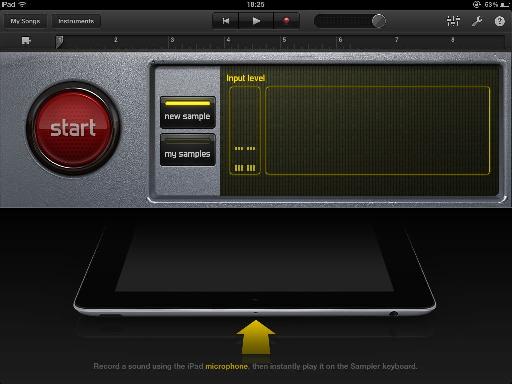 If you are hoping to record a sample that's in time with a backing track, you will need to use headphones or the backing will bleed through from the iPad's speakers and into the sample. A better way to do this might be to record a loop into a regular audio track. Assuming that you are recording the sample in isolation (which is more common) you can do it without any special monitoring. Simply hit the big red Start button and record your sound. Remember that the iPad's mic is on the top edge, between the headphone port and the on/off button. When you're done, you'll see a waveform appear. 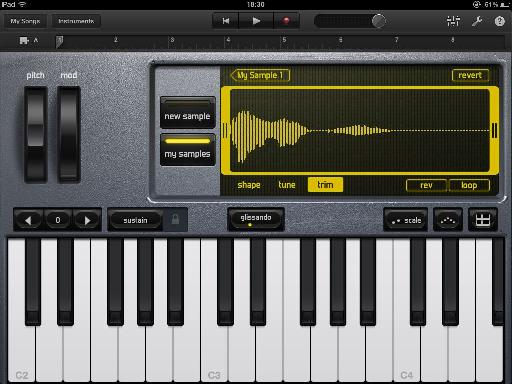 You will now be able to use the onscreen piano keys to play your sound, and much hilarity will probably ensue from speaking a sample and then pitching it way up or down. Pick up the handles at either end of the waveform in Trim mode and you can set the start and end points. Hit the Tune button and you can adjust the fine and coarse tuning of the sample, and the Shape tool lets you set the attack, so you can have it fade in if you like. Use the Revert button if you want to undo any of these changes. The 'rev'