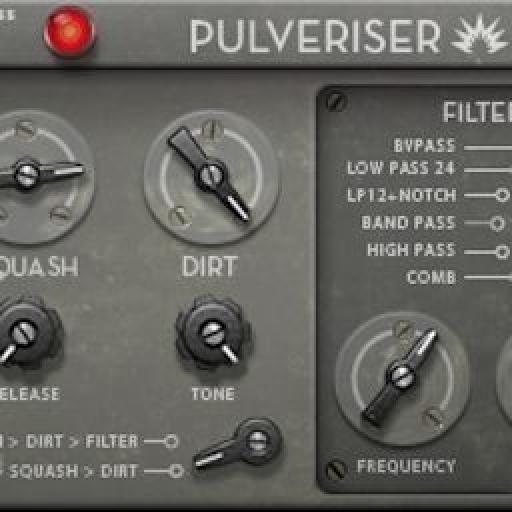 Language
Reason is well known for its incredible-sounding instruments and effects and the Pulveriser is no exception. Mo Volans discovers just how capable at distortion this new effects unit is.

Reason users have had access to a great distortion unit in the form of the Scream 4 for some time now. The crazy guys at Propellerhead obviously thought Scream wasn't edgy enough though as they have now introduced the new Pulveriser to Reason's sonic armory.

Let's take a quick look at this edgy new effects processor and see how Reason 6 users can benefit from it. Everything you see and hear here is available from the Reason 6 factory sound bank...

The first thing to realize about the Pulveriser is that it's a whole lot more than just a distortion unit. Packed into this virtual device you'll find a compressor, filter, envelope follower and LFO. Obviously you can distort your sounds with it but you can also do a whole lot more.

This is much more of a creative effect than the Scream 4 and in some areas it resembles a synthesizer. With all this going on you can expect a pretty in depth interface and the Pulveriser has just that.

Although there are essentially four different areas to the Pulveriser's control panel, the Props have cleverly named each section so that even the beginner should have no problem getting started. The compression setting is called Squash for example and the drive setting Dirt. You get the idea.

The many areas of the new Pulveriser effect.

From Mild To Massive

In my short time with the Pulveriser the one thing that has struck me is the unit's ability to produce everything from subtle saturation and overdrive to over-the-top distortion and twisted modulated effects.

The same loop treated with the 'glitch mob' preset:

By leaving the extra units such as the Tremor and Filter disengaged you can use the drive and compression based controls to create simple effects such as straight up saturation or pretty full on compression. Of course if you want something a little more complex you can start to reintroduce other processors.

The loop treated with a heavily compressed patch: 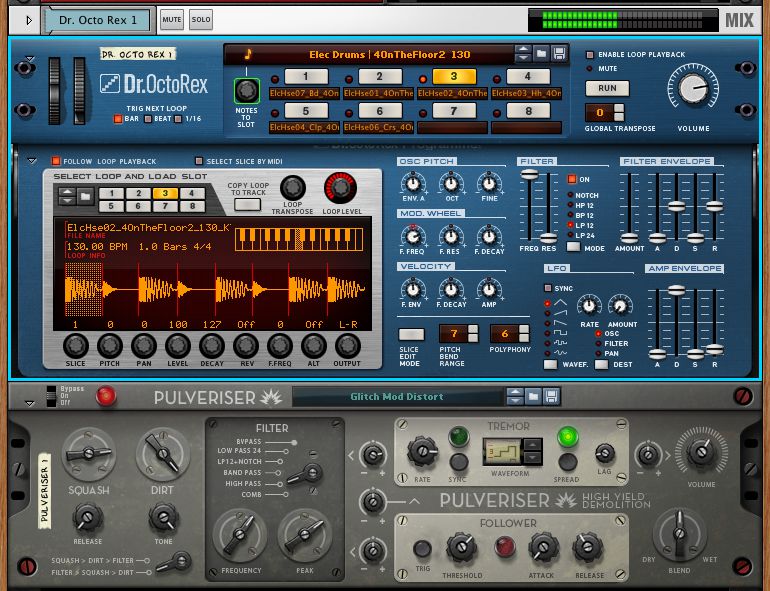 The loop is treated with the 'tin can' patch:

On the flip side of this you can leave the compression and drive turned down and use the LFO and envelope followers to create tremolo and auto filter-type effects. This is really a very flexible processor capable of a lot of different sounds.

When it comes to an effect as complex as the Pulveriser it's great to have a few presets to get you started. This is especially useful for the users that are new to music production or Reason.

Fortunately the Pulveriser comes with a pretty large list of really useable patches that show off its flexibility very well. If you are loading the Pulveriser for the first time I would suggest throwing some of your favorite loops through the factory programmed presets to really get an idea of what this thing can do... Happy Pulverising! 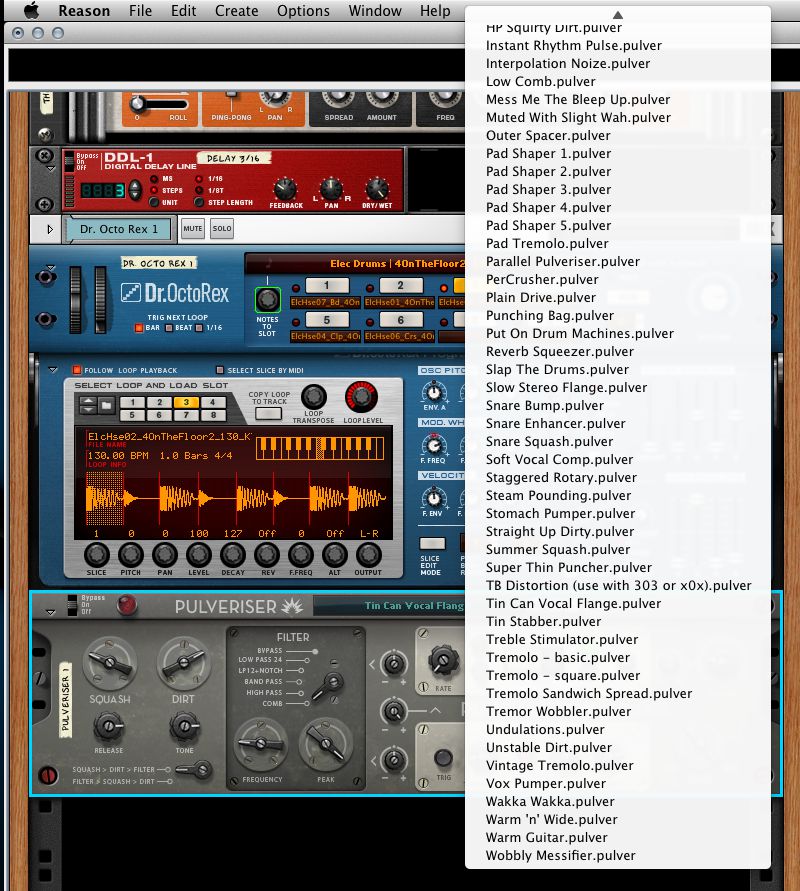 The macProVideo.com Reason 6 204: Pulverizer tutorial-video is here! Learn how to get the best of this beast of an effects unit.