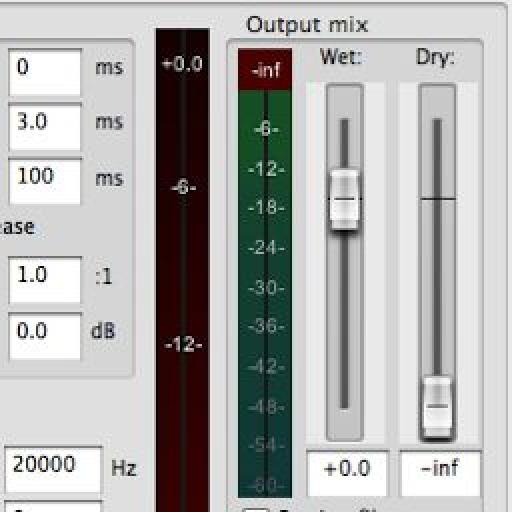 Language
G.W. Childs returns with a tutorial on how to get side-chaining in Reaper 4. As well as showing the basics, he shares some time-saving tricks too.

So far we've covered a great many interesting thing, or two about Reaper. But, I thought it was high time that we got in to some regular, old production techniques.

One of the most basic, yet most widely used of production techniques these days tends to be side-chaining. Producers use this feature for many, many reasons, but one of the biggest reasons is making room for the all-powerful kick drum.

This particular technique listed above has been used to great effect in modern electronic music over the last several years. Producers will simply sustain a low synth note, side-chain the synth notes compressor to an incoming kick signal, and suddenly there is an 8th note bass line fading in and out in perfect synchronization with the kick drum. But, because a compressor has attack and release functions on it, you can also make the bass fade in and out in time with the kick drum, which causes this hypnotic effect. Quite cool, and very done.

Where Reaper Fits into All of this

Reaper does allow the side-chaining functions that we have all come to expect and love. Though, I will say that it's not as easily picked up as one would hope. The new look of Reaper 4 does make things a little more 'neat'. But, I definitely found myself pulling out what little hair I could from a shaved head.

With some careful digging around though, I was able to figure it out, and I have to say that Reaper does the job quite well, and its compressor sounds very nice doing the job, on top of it!

In this tutorial, I'm going to walk through how to set up a side-chaining scenario between a bass synth and a kick drum. Then, to make things even more fun, we'll also use the same kick to side-chain the hi-hat, too.

As I am a big fan of Microtonic from Sonic Charge, I'm going to use it as my primary drum device for this exercise. 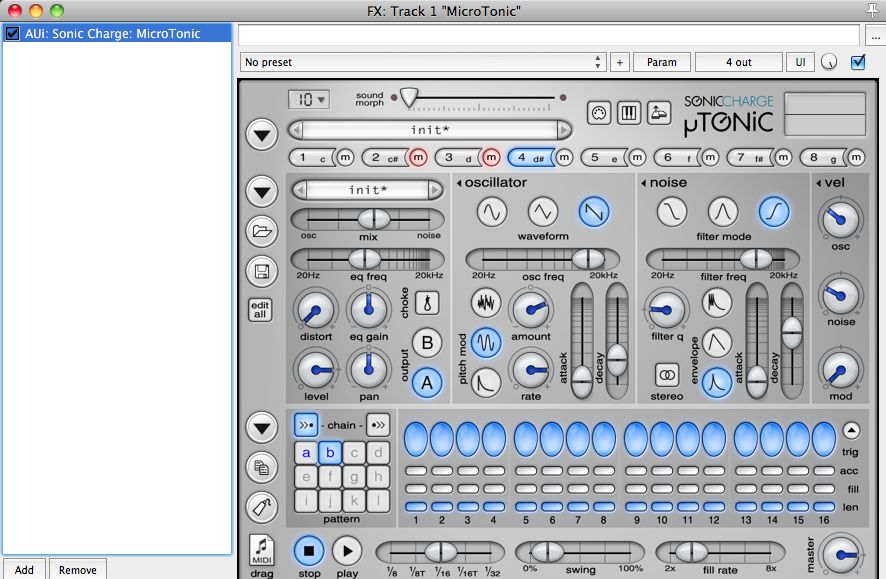 From the Microtonic, I drag a pre-programmed beat into the Reaper sequencer that I made from Microtonic's internal step sequencer.

This particular pattern has a hi-hat that plays a 16 beat, and a kick that plays an 8 beat. Take a listen...

About as generic as you can get... but effective.

I'll start the side-chaining process by dragging the I/O button from my kick drum channel  (which is Mictrotonic B) to my hi-hat channel I/O button, (which is Microtonic A). Pay attention to this part, because it'll save you a bit of time, trust me. 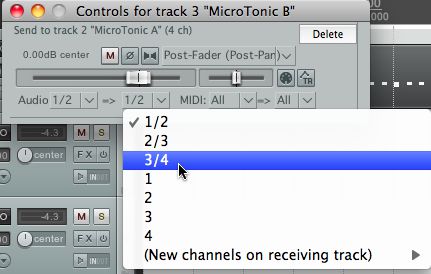 Now, I'm going to add a compressor to the hihat by clicking on the FX button on my Microtonic A output channel, and selecting ReaComp. 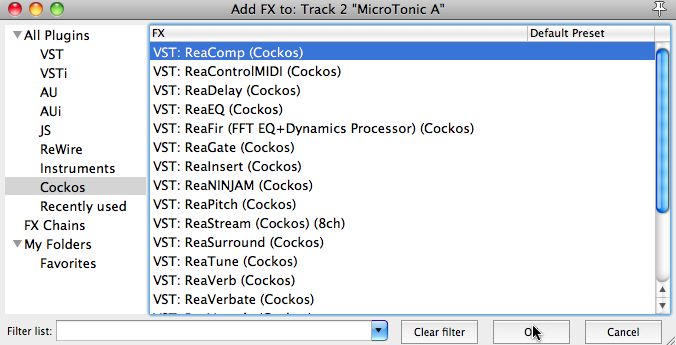 In the Reacomp control panel, I'll change the detector input to Aux L and R. 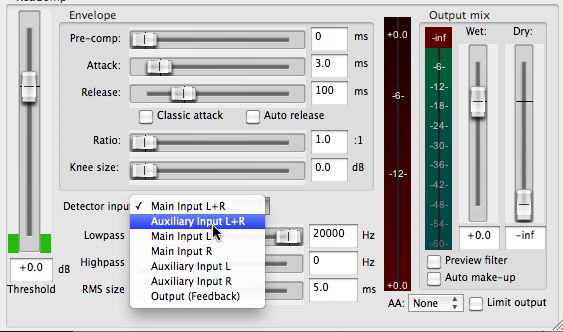 When I start playing my sequence now, I see signal coming in from the Kick on my Hi-hats' compressor. I'll lower my threshold down to -29.6 and set my Ratio to 6.0, not too severe on the compression for this part. This instantly gives the hi-hats the ducking effect. No other tweaks are needed!

To make my bass synth will be quite simple. I'll set up a ReaSynth, by using the 'Insert Virtual Instrument on New Track' function. Then by holding the Command button, I'll draw in a Region.

I'll double-click on the region now and draw in one note that sustains from two measures.

Again, I'll drag the I/O button from my kick drum to the ReaSynth track I/O button, and set the destination track to 3/4.

Now, I'll create a ReaComp on my Bass channel. This is the moment of truth, where it all comes together! I'll click on the FX button on my Reasynth Track... 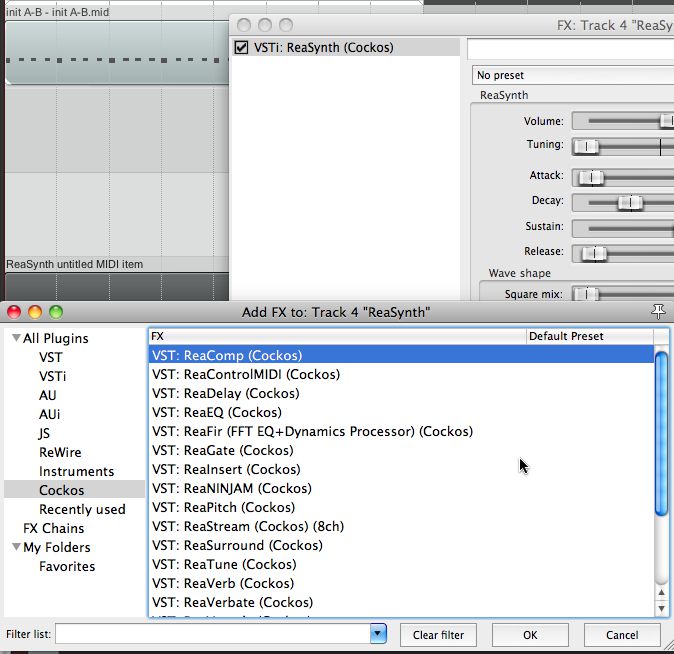 Again, I'll set my Detector input to Auxiliary L+R like I did earlier in this exercise.

My compressor settings will be much more severe this time. It's needed to get the good, ol' bass ducking effect we all know and love.

I'll set up my Threshold at around -25.0, which will be really tight on my bass synth and smash it in between my incoming kick. Then, I'll set my Compression Ratio to 28.0. Between these two settings, there really isn't anywhere for our little bass note to run.

Finally, I tweak the Attack (3.0) and Release (46 ms). This is highly optional because we all have different ways that we like to hear this take place. These settings just worked for me. Alright, let's give it a run...

Even if you aren't a techno guy, you'll still want to know how to do this in Reaper. Side-chaining is very helpful for vocals, lead instruments, and so many other things. Really, just anything you want to make room for in a mix.

I do have to say that once I got this going, the native Reaper plug-ins performed admirably, and I really do have an all new respect for them. That compressor does the job admirably.

If you haven't picked Reaper up yet, remember, you can run it in trial mode for quite a long time, too! Download Reaper here.