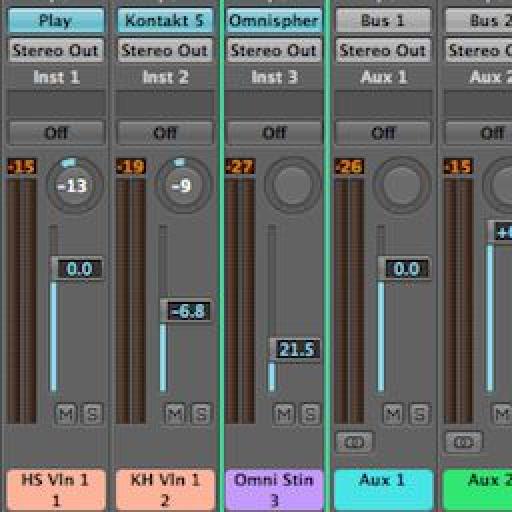 Real-Schmeal. Give Your Sample-Based Orchestral Pieces the Gift of Creativity

Language
Is it desirable, to make your sample-based instruments sound as close to the "real-thing" as possible? Jay Asher suggests an alternative approach when creating orchestral pieces in your DAW.

The first project I composed music for utilizing a computer was the New World TV series “Zorro” in 1990. The computer was an Atari Mega 4 ST with C-Lab's Notator, which I used to print out the parts for the orchestra I was composing for and to augment with MIDI based sampled instruments. I recorded the orchestra in Los Angeles and it sounded great, but I wanted a bigger sound than the budget would accommodate. So I took my computer to a studio and hooked it up to a couple of EMU Emulator IIIs, which were the state of the art samplers/libraries in those days IMHO and started to double the orchestra parts with the help of Jeff Rona, who knew MIDI far better than I did at that point.

For some things, this worked spectacularly well, for others less so. The cellos were a problem. While the samples made the section sound bigger, it somehow detracted from the natural warmth and did not give the sound the thickness I was looking for. Somebody, me, Jeff, or the studio owner/engineer John Bezjian, came up with the idea of trying a MIDI capable Memorymoog analog synthesizer to add a cello sound. We mixed it in with the real cello and there it was, magic! On a later project, I did the same for french horns with a Roland D-50 and got similar excellent results.

So now, we are 22 years later and sample libraries have come a long way, baby! Thanks to more powerful computers with faster chips and more RAM as well as faster drives, developers have given us libraries that are far more deeply sampled, with round robins, true legato, and so much more that makes them capable of more closely approaching the sound of a real orchestra. And yet…

The simple truth is that to those who know what a real orchestra sounds like, a sample-based orchestra rendition of a piece sounds like the real thing until you put it next to the real thing. It is the difference between going to bed with a beautiful woman or a lovely picture of a beautiful woman. At the risk of being crude, both may get you where you want to go but one is a far deeper and emotionally satisfying experience than the other.

So chasing “reality” only takes you so far. Once you accept that, your mind can be open to the creative possibilities that I learned back in 1990. Did that Memorymoog patch make my mix of real cellos and sampled cellos sound more “real”? No, of course not. Did it make it sound better, richer, more emotional, and more personal? In the words of a former vice-presidential candidate, “You betcha!” Ditto for the French horns/D-50 tandem.

And the principle still applies. In Pic 1, I have played in a simple violin melody using East West's Hollywood Strings Violins. It sounds great. (Note: I work part time for EastWest as their Online Coordinator)

But I am after a more complex sound. So I decide to add the violins from Kirk Hunter's Concert Strings II and play in the part again. It is, by the way, essential that you play it in again (or program it differently) as each responds differently to touch, MIDI controllers, etc. and particularly if you are playing it in live you will add a more human element.

I mix the two together and send them both to a little reverb and listen. I like it better,  but does it sound more “real”? If you think it does, then the answer is yes. No, if you don't. Personally I don't care, because I like the sound. See Pic 2. 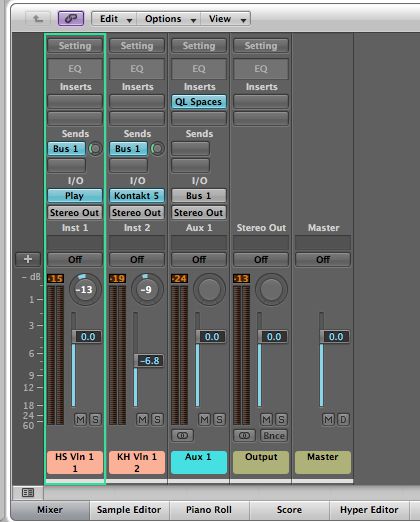 But I still do not have the sound I want, which is more emotional and rich. So I reach for Spectrasonics Swiss Army knife of a synthesizer plug-in, Omnisphere, and navigate to the CS-80 Strings patch, which is gorgeous. See Pic 3. 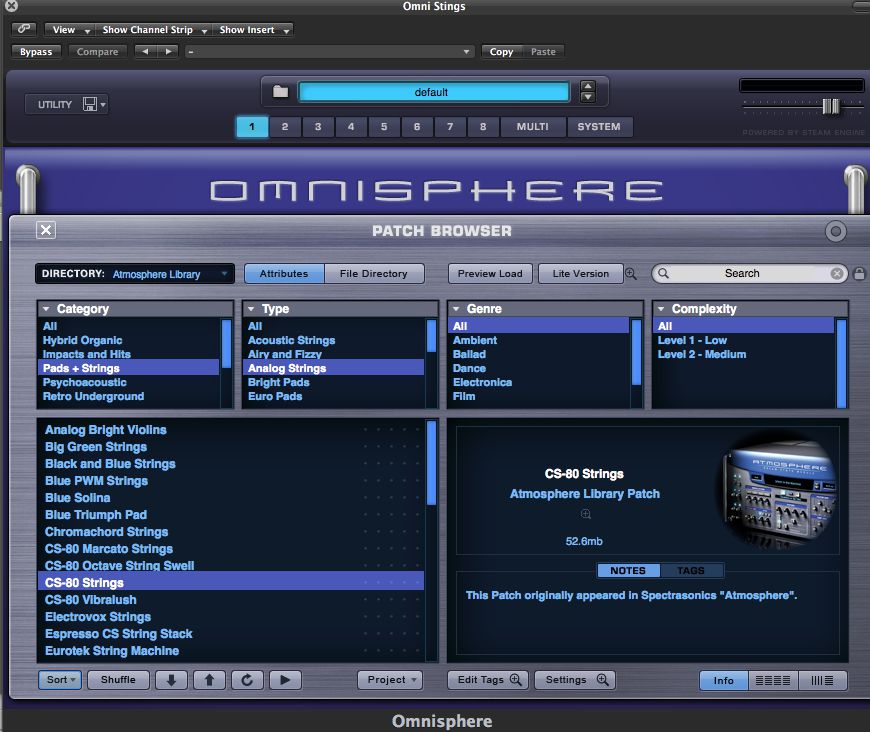 I then add just a little of it into the mix, as you can see in Pic 4. Now we are getting somewhere! 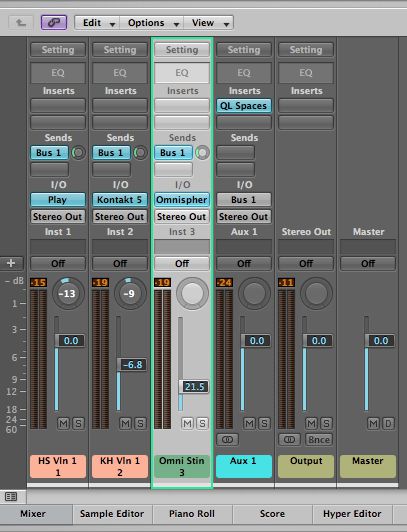 My final touch is to open another send to create a second aux and add a UAD-2 Roland© Dimension D chorus, to give the whole sound some texture and sit it back in a mix a little. Check out Pic 5. 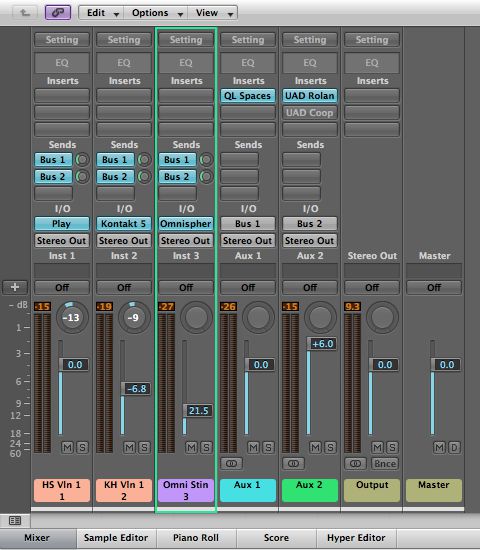 But does that little bit of added Omnisphere patch and Roland© Dimension D make it sound richer, more emotional, and more ME, and is it better than just opening up a sample patch and working like crazy to try and fool someone into just thinking that they are listening to the real thing?

You already know what my answer is. If you are a trained guy and know what the real guys do to sound like they do, or if you are not and you don't, while it is good to be informed by this, you do not need to be captive to it. Your samples are NOT the real deal, they are only a nice snapshot of the real deal. Try giving yourself the gift of creativity to your sample-based compositions by exploring options that may make them sound less close to the real thing, but make a more personal statement.

Pat Buckna
Pictures of your set-up are nice, but some audio samples would be better, which is sorta like the point of your article!
Jay Asher
What, and give you the ability to sound like me?? :)
John Marx
Any Chance you can use Logic's built in sounds to do a tutorial post.

Surely there is a way to sound half decent using Logic's pre sets? or is logic just not that good yet?.

Jay Asher
Logic is great and comes with lots of good sounding stuff, but it does not come with a full complement of good orchestral instruments.
Magic Fingers
At first, while reading this article I was also hoping to see some audio samples, and hear what you came up with... But more importantly, I have the sudden desire to open up Logic, tweak some string samples, add/layer in some 3rd party string samples with the same midi code, and see what works. Thanks for pushing my buttons! ...and also allowing me to get my money's worth!
Great Article